Britain’s shape-shifting PM wanted to take the lead on climate, but he didn’t anticipate how hard that would be 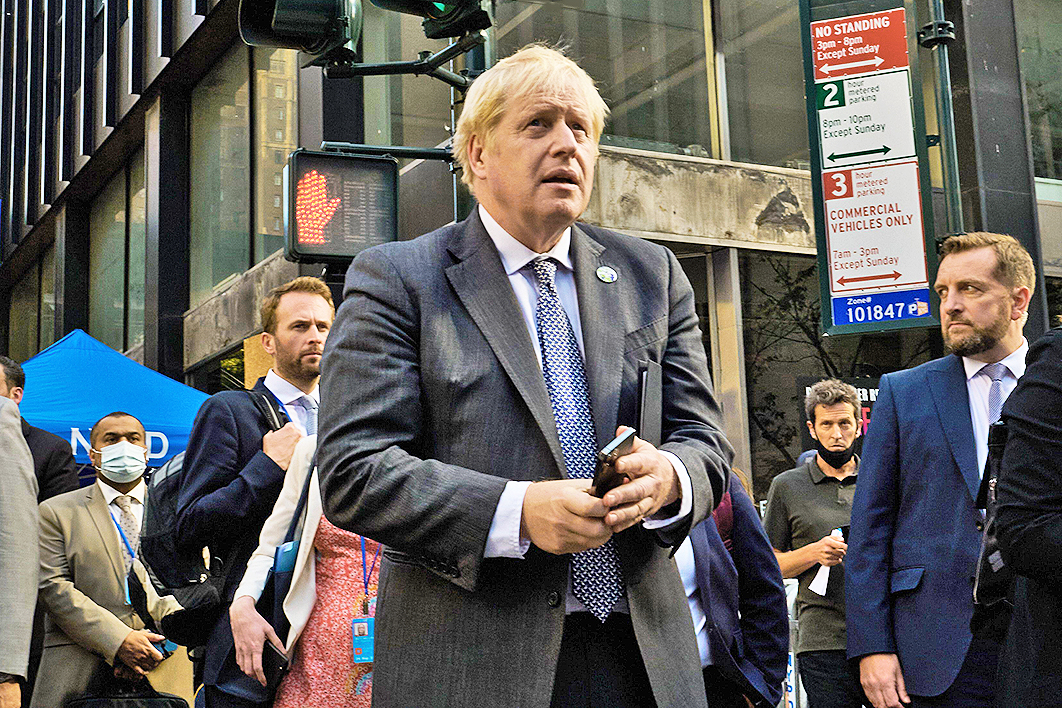 Boris Johnson couldn’t help himself. Speaking to the assembled leaders and ambassadors at the UN General Assembly last week, the British prime minister, whose principal schtick is jokey literary and historical allusion, asked them to remember Kermit the Frog. Specifically, he wanted them to recall Kermit’s song “It’s Not Easy Being Green” so that he could inform them that, in fact, the opposite is true. Being green isn’t hard at all. And that’s why the world needed to make stronger commitments on climate change in advance of next month’s COP26 UN climate conference in Glasgow.

Judging by the bemused looks in his audience, few were familiar with the musical oeuvre of Sesame Street circa 1970. But it was not really them that Johnson was seeking to convince. It was his own Conservative Party and his own government back home. For the prime minister has found himself facing an acute difficulty as COP26 approaches.

It’s not merely that Johnson has something of a reputational problem of his own. Only six years ago he was a paid-up climate sceptic, accusing global leaders of being “driven by a primitive fear that the present ambient warm weather is somehow caused by humanity; and that fear — as far as I understand the science — is equally without foundation.”

Given that Johnson’s entire career has been one of political shapeshifting according to the views of his audience and his prospects of personal advancement — he’s the socially liberal mayor of London who became the figurehead of the Brexiteers’ “Leave” campaign — Johnson’s conversion to climate advocate has surprised no one. His problem, rather, is that being green is actually proving much more difficult than he had bargained for when he blithely offered to host the crucial UN climate talks a couple of years ago.

His rationale was that Britain needed to show after Brexit that it remained a big international player: no longer central to Europe, but still a “global Britain.” What could be a better signal than leading the world in tackling the climate crisis? Unfortunately for Johnson it is now clear that Britain is almost completely failing to do that.

At home, the Conservative government boasts that Britain is the first major country to put a “net zero” emissions reduction target into law: under the amended Climate Change Act, the government is obliged to achieve this by 2050. It has also adopted one of the world’s most ambitious medium-term targets, a cut in emissions of 78 per cent on 1990 levels by 2035. (Of this, 44 per cent had already been achieved by 2019.)

But setting targets is the easy bit. Meeting them is more difficult. And here Britain is well off track. As the government’s independent Climate Change Committee has been warning for some years, policy has lagged well behind promises. In its latest report on the government’s progress, the committee didn’t mince its words. “This defining year for the UK’s climate credentials,” it declared, “has been marred by uncertainty and delay to a host of new climate strategies. Those that have emerged have too often missed the mark. With every month of inaction, it is harder for the UK to get on track.”

To respond to this criticism, the government has for some time been promising a “net zero strategy.” But this has been repeatedly delayed amid disagreements between Johnson and his ambitious chancellor of the exchequer, Rishi Sunak. The Treasury under Sunak has been preparing a review of the costs of achieving net zero, designed to show that it will hit middle- and lower-income earners hard through higher energy, transport and food prices. The review’s methodology is highly contested. It takes almost no account of innovation, which has already pushed the costs of green technologies — wind and solar power, for example, and electric vehicles — far below the levels predicted when policies to promote them were introduced. In this way, the Treasury’s critics argue, the review will considerably overstate the actual costs of achieving the net zero target.

But this is not really an argument about obscure economic methodologies. It is an entirely political one, for Sunak is pitching himself as the Conservatives’ next leader, and to do that he wants to appeal to the sizeable chunk of Tory MPs and party members who are not at all signed up to the net zero idea.

There are two sources of resistance. One is cost: the genuine anxiety that moving to a net zero economy — even over thirty years — will hurt Conservative supporters, and that any government pursuing it will pay a political price. The other is that it is patently obvious that the only way to make such a transition is for government to intervene much more actively in the economy, through industrial strategy, regulation and taxation, and such a prospect makes most Tories deeply uncomfortable.

This resistance has already spurned a new Conservative organisation, the Net Zero Scrutiny Group, designed to rally political opposition and slow down the government’s climate ambitions. Not coincidentally, it was founded by the same backbench MP, Steve Baker, who led the hardline Tory Brexiteers in parliament and harried Theresa May’s government into successive concessions and defeats until Boris Johnson replaced her and acceded to their demands.

These factors mean that Johnson is feeling the squeeze. On the one hand, he needs to go into COP26 with an ambitious domestic plan to achieve net zero. It will hardly do for the conference hosts, desperately trying to persuade other countries to take stronger climate action, to be so visibly unable to produce a plan to do so themselves. On the other, Johnson can’t afford to risk producing a plan that in its implementation could cost the Conservative Party votes among its core supporters — and give Sunak the ammunition with which to succeed him.

This is not, of course, a problem unique to Britain. Some version of this political squeeze is occurring in almost every advanced economy. Most governments accept that they must take stronger action to reduce emissions. Most will say (rightly) that the green transition offers huge opportunities to develop new industries and create new jobs. But all are worried that higher-carbon industries will lose out, and that consumers and households will face higher costs and punish them at the ballot box.

And this is why Johnson has a problem with COP26. The conference in Glasgow is just a month away. But the media triumph that Johnson envisaged when he decided to host it looks increasingly unlikely. On the contrary, he could be facing a PR disaster: a conference denounced for its failure not just by Greta Thunberg but by many of the UN climate negotiators themselves.

And the reason is that, if no major advanced country is doing enough to achieve net zero, the global emissions trajectory is even further off track. With China’s economic growth having resumed after Covid, Brazil experiencing rapid deforestation, and Russia and India largely uninterested in the climate agenda, the collective commitments of governments are not nearly enough to hold the global average temperature rise to the “well under 2°C” goal of the Paris Climate Agreement, let alone the 1.5°C that the poorest countries demand.

The numbers are these. To have a reasonable possibility of being on track to hold the temperature rise to 1.5°C, the Intergovernmental Panel on Climate Change says global emissions in 2030 must be limited to around 26 gigatonnes of carbon dioxide equivalent, or GtCO2e. Announced emissions reduction pledges for 2030 will reduce global emissions to 46–49 GtCO2e. The “emissions gap” of 20–23 GtCO2e, between where the world needs to be and where it is currently likely to be, represents almost an additional 100 per cent of maximum desirable emissions.

If many countries were still to announce their commitments, COP26 might still have a chance of success. But among large emitters only China has yet to make its new 2030 pledge. The European Union, the United States, Japan, Britain, Brazil, Australia and most others have already submitted their “nationally determined contributions,” the UN term for emissions pledges. As COP president, Britain is desperately trying to persuade China to announce an ambitious target — for example, to have its emissions peak earlier, in 2025, and commit to stop building coal-fired power stations. But China has never been amenable to external pressure of this kind, and after the recent defence pact announcement between the United States, Australia and Britain, it is particularly resistant to British overtures. China will make a big commitment. But it can’t bridge the global emissions gap.

So what will happen at COP26? There will be negotiations. But the gap to 1.5°C will remain. And in those circumstances it will be almost impossible for the poorest and most vulnerable countries to agree on a final communiqué, except one that acknowledges the conference has failed. And it will be very hard for the global media to report anything else.

One of the popular stories about Boris Johnson is that as a small child he wanted to become “world king.” Perhaps he thought COP26 might fulfil his dream. Right now it looks as if it could turn into his worst nightmare. •

Michael Jacobs is Professor of Political Economy at the University of Sheffield and a former climate adviser to British prime minister Gordon Brown.