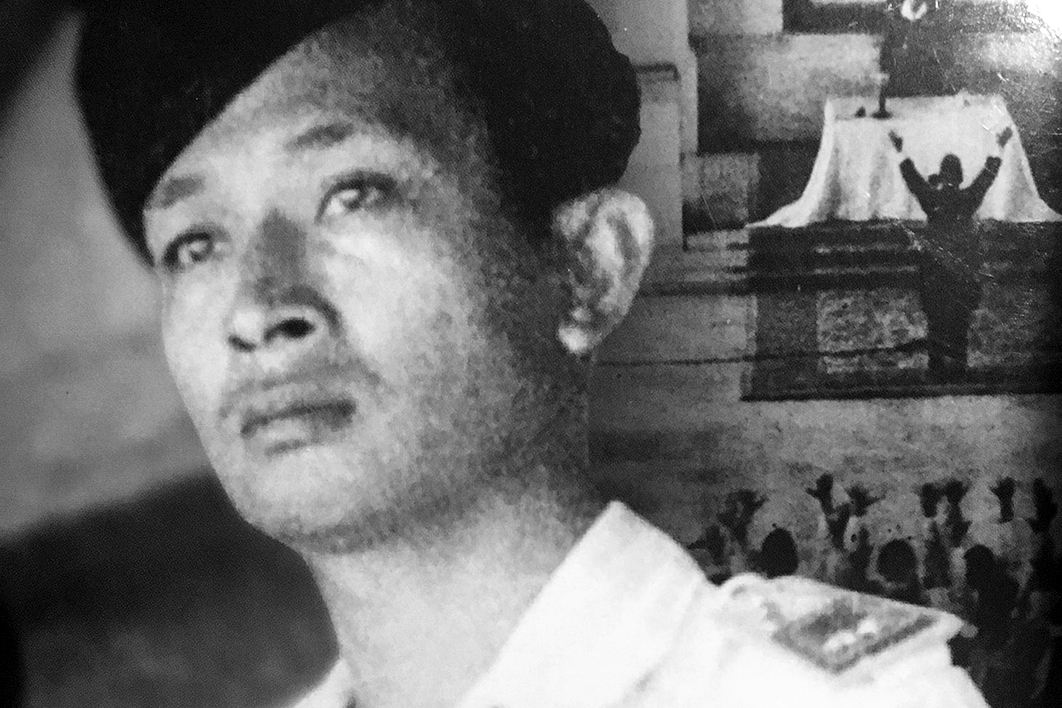 The outsider: Lieutenant-Colonel Soeharto at a military parade in Yogyakarta in 1949. Ipphos

It’s been more than twenty years since the question that hung around during the long years of Soeharto’s military-backed presidency of Indonesia — what next? — was answered. After stepping down in 1998, Soeharto lingered in his Jakarta home until his death a decade later, protected against feeble attempts to bring him to account for the violence and corruption during his reign.

Even in power, the former army general had been a much blander, if more successful, dictator than his predecessor Sukarno or contemporaries like Burma’s Ne Win, Zaire’s Mobutu Sese Seko and the Philippines’ Ferdinand Marcos.

So has David Jenkins’s long-awaited multi-volume biography missed its moment, at least for the wider reading public? This first volume suggests not. Written with Jenkins’s characteristic clarity and verve, and painstakingly sourced, it is an enthralling read. As the list of acknowledgements shows, he managed to speak with most of the key surviving figures from the Soeharto era before they died.

The knowledge Jenkins has garnered since he arrived in Jakarta in 1969 as correspondent for the old Melbourne Herald has been a long time brewing. The two scholars whose endorsements appear on the cover of Young Soeharto, Benedict Anderson and Jamie Mackie, both died some years ago. Rather than some Javanist feat of posthumous telepathy, their approval came from their close reading of the draft and their guidance as it proceeded.

There’s also a second question: does Soeharto deserve such a long and detailed study? This volume runs to some 500 pages and covers only the first twenty-four years of his life. Two more will follow, surpassing Herbert Bix’s Hirohito biography and equalling Ian Kershaw’s study of Adolf Hitler, though nowhere near Robert Caro’s biography of Lyndon B. Johnson (four 800-page volumes so far). Even then, Jenkins plans to take us only to 1966, when Soeharto pushed Sukarno aside.

The answer is yes. Soeharto ruled Indonesia for thirty-two of the seventy-six years since the republic was declared in 1945. Despite the subsequent shift to a popularly elected leadership, the country retains many important elements of the system he presided over: a military not entirely back in the barracks, powerful business conglomerates, and an ideology that stands in the way of a hard look at the violence of 1965–66 that enabled him to take power. Even now, Soeharto’s former son-in-law and present defence minister, ex-general Prabowo Subianto, could make a third try, perhaps this time successful, for the presidency.

The core of this volume is a highly readable narrative of some 300 pages, with debates and digressive detail pushed to the 200 pages of notes that most readers can skip. It shows how Soeharto overcame a troubled and impoverished childhood to become a “polite, clever and capable young man” at the forefront of Indonesia’s emerging military in 1945.

Dubbed “the smiling general” by one early hagiographer, Soeharto came out snarling in 1974 when a magazine called POP ran a cover article suggesting that, rather than being the simple anak desa (village boy) of the official story, he was the son of a member of the Yogyakarta royal family. His young mother, the story went, was married off to a village official when Soeharto, who accompanied her, was six.

Jenkins teases out this version, along with other speculation at the time about Soeharto’s origins, and even the improbable suggestion that he was the son of the Yogyakarta sultan himself. (The sultan was studying in Holland at the time, though some Javanese believed their semi-divine rulers capable of remote impregnation.)

The POP article appeared at a touchy time for the president. His ambitious internal security chief, General Soemitro, had allowed a clamour to build up about corruption and favouritism towards Japanese and local Chinese investors. Using the tried and tested method of pouring petrol on a fire, rival general Ali Moertopo’s Opsus (special operations) group pointed Islamic hotheads at a Toyota showroom. Neither general came out well in Soeharto’s eyes.

The article was Moertopo’s effort to regain favour through flattery. It failed miserably. Soeharto saw it as a slur on his mother that branded him illegitimate. As he had when students mocked his wife Tien as “Madame Ten Percent” in the belief she took a cut of government projects, he lost his cool, calling a press conference to denounce the story as unfactual and subversive.

The real story — long intriguing to psychopolitical analysts — is that Soeharto’s mother, aged sixteen, disappeared when he was six weeks old and was found hiding in the roof-space of a village house. She and his father split up, and the baby was placed with a village midwife. There followed a childhood during which the boy was shuffled between the households of father, mother and relatives.

Barefoot and sarong-clad, Soeharto gained a rudimentary secular education in Javanese-language primary schools, but also — while apprenticed to the noted faith healer Romo Daryatmo — a deep immersion in Javanese mysticism and, through the wayang (or shadow) theatre, a smattering of classical Hindu thought. Though nominally Muslim, Soeharto inclined to spiritualism until late in life, when the increasing piety that accompanied Indonesia’s growing prosperity impelled him to be more visibly Islamic.

This upbringing left the young Soeharto a cool, outwardly respectful but always distrustful person, observing traditional precepts to keep emotions in check and accepting the Mahabharata’s teaching that sometimes a prince has to kill in order to do the right thing.

His big chance came at nineteen, when Holland’s neutrality was swept aside by Hitler, and the Netherlands East Indies desperately boosted its defences against Japan. Accepted into the colonial army, he rose quickly over the next twenty-one months, completing a sergeant’s course just as the Dutch were surrendering in March 1942.

Discarding his uniform, he disappeared back to central Java, where a few months later he joined the Japanese-run police force. Again he excelled, winning the trust of his superiors. Then, towards the end of 1943, the adventurous intelligence officers of the Japanese Imperial Army’s Nakano school — partly inspired by T.E. Lawrence’s stirring up an Arab revolt against the Turks — set about raising a local military force, known as the Peta. Again, Soeharto advanced rapidly to become a company commander, with a rank equivalent to captain, by early 1945.

While many of the other volunteers saw the Peta as the nucleus of a future army for an independent Indonesia, Soeharto showed no sign of such feelings, though he was to claim otherwise later. He had signed up to the two armies keeping Indonesia under control for the pay, the food, the uniforms and a sense of belonging. When a Peta battalion revolted against its brutal and dissolute Japanese officers at Blitar in February 1945, the Japanese swept in, executed some of the Indonesian officers, and put Soeharto in charge of the disarmed troops. He stayed with them in a remote corner of East Java until Japan surrendered.

The disbanded Peta did indeed become the core of the Indonesian National Army that resisted the return of the Dutch. “Soeharto, blessed by luck and a born survivor, had had rather a good war,” Jenkins says. “He had served in two armies, first on one side, then on the other.” By August 1945, now aged twenty-four, he had “more military training by far, and more military experience, than perhaps 98 per cent of his fellow Peta officers, the men who would form the backbone of a new Indonesian army.”

Soeharto stood out from his contemporaries, most of whom were from the priyayi (gentrified) class, many of them educated in the Dutch language and European ways. Though his ability got him far, he was still an outsider, an aspect that Jenkins will no doubt show to be important later on.

This saunter through Soeharto’s childhood and its many settings, set against the last years of the Netherlands East Indies, is engaging. Most striking is its exposition of Japanese influence on the shape and doctrine of the Indonesian military. Jenkins was able to interview many of the Japanese officers involved in the Peta, including some who knew Soeharto personally, greatly illuminating a connection previously mapped by American and Japanese scholars.

The Japanese influence includes an emphasis on what they call seishin and Indonesians call semangat (spirit), and rigid obedience to compensate for any lack of firepower. It also, unfortunately, includes a lot of violence, by officers to their soldiers, and to civilians. As with Burma’s Tatmadaw and the South Korean army to some extent, the Imperial Army lessons live on.

David Jenkins’s second volume will cover the 1945–49 revolutionary war against the Dutch, with a third volume to deal with Soeharto’s career in the new Indonesia. Many will be looking forward to his account of the dramatic events of 30 September and 1 October 1965. On the pretext of an alleged plot against President Sukarno by an American-aligned “council of generals,” Lieutenant-Colonel Untung bin Syamsuri, one of Soeharto’s former underlings, led a pre-emptive coup by palace guards. The Indonesian Communist Party, or PKI, endorsed Untung’s coup while Soeharto was in the process of quelling it, giving him an excuse to unleash the anti-communist purge that killed more than half a million PKI followers.

For more than fifty years, scholars have picked holes in Soeharto’s claim that the PKI made the first move. Benedict Anderson and Ruth McVey soon uncovered Untung’s former closeness to Soeharto and the role of a mysterious PKI agent called Kamaruzaman. More recently, the opening of the archives has revealed more detail. John Roosa’s Pretext for Mass Murder showed how the army and the PKI were each waiting for the other to make the first move, at Sukarno’s feared imminent death if not before. In Beijing’s archives, Taomo Zhou found that PKI secretary D.N. Aidit had been telling Chinese foreign minister Zhou Enlai about plans to form a “military committee” to head off and confuse an army move. In The Army and the Indonesian Genocide: Mechanics of Mass Murder, Jess Melvin showed how the army was primed to kill the PKI membership.

So, whodunnit? Did the PKI’s Aidit tell Untung to move? Or was Kamaruzaman a double agent for the army who convinced the suggestible Untung that a council of generals existed and was about to make a move? Did Moertopo’s Opsus light the fire as well as pour on the petrol? If so, did Soeharto, perhaps channelling Prince Arjuna in the Mahabharata, see the six generals murdered by Untung’s troops as a necessary sacrifice? That they included the more worldly, more senior-ranking contemporaries from Peta days did leave the field much clearer for him.

Revised: Updated 31 January 2022 with details of the book’s Australian publication.