Railing: Donald Trump talks to journalists before boarding Marine One in the grounds of the White House last Saturday. Shawn Thew/EPA 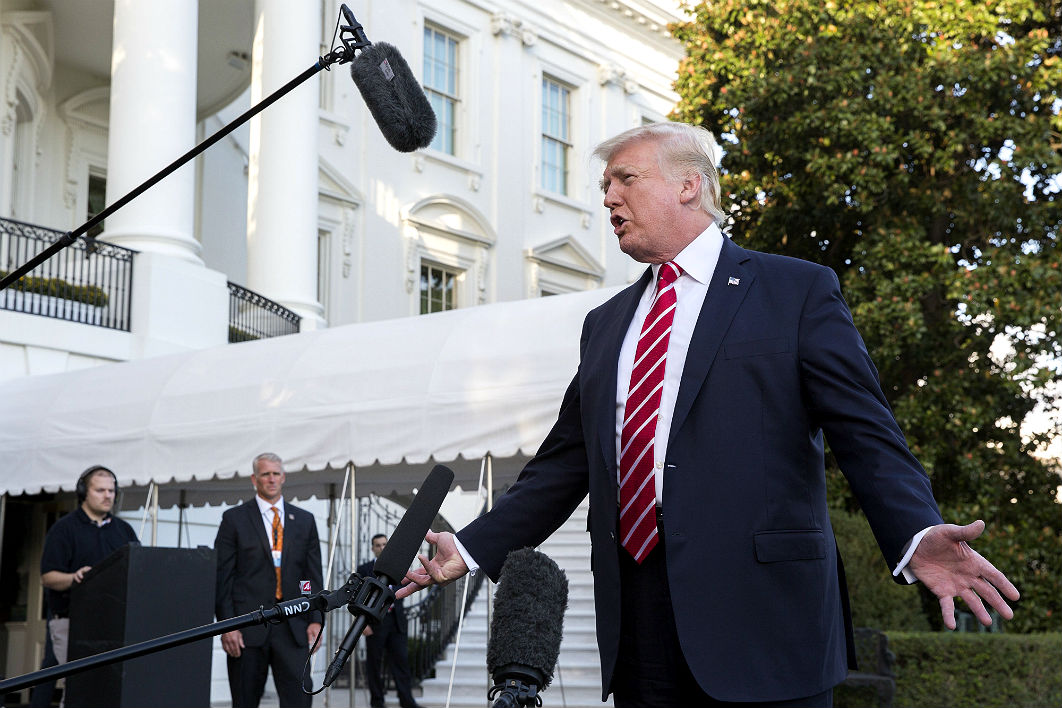 Railing: Donald Trump talks to journalists before boarding Marine One in the grounds of the White House last Saturday. Shawn Thew/EPA

An Australian in the United States is branded on the tongue. The moment you speak, they know you’re not from around here. In previous decades, the question was usually whether you were English or Irish. As a bloke in Maryland joked the other day, taking me for a Pom, “We Americans think you people speak our language real good.”

On this front, I can report progress. These days, Australia is often the first guess. And this time I haven’t once had the comic confusion over Austria and Australia.

One other big difference has been noticeable during these six weeks in Washington, New York and up the east coast. On previous visits — under Reagan, Clinton and Obama — being identified as not from around here never once triggered a question about what we thought of the president. The United States is a world confidently unto itself, so there was only mild interest in outsider views. And the personality of the president never came up. It does now.

Grappling with the meaning of Donald Trump has trumped questions about kangaroos and what season it is in Oz. That’s why it was no surprise to see a glum Malcolm Turnbull as one of the faces on the cover of Foreign Affairs magazine’s September–October edition, “The View from Abroad,” reporting on how allies are responding to Trump.

My random sampling finds that viewers within America are just as mystified as we are. Some are amazed and scared and outraged. Some, though, love what they see: the Donald “flipping the bird” at the system via tirades and tantrums; the tweeting, Trumpeting troll-in-chief.

The lore and the laughs of the travelling-correspondent game decree that a hack arriving in a country afresh should make all grand pronouncements within weeks of landing. After that, the gradual growth of understanding and accumulation of facts tend to get in the way of sweeping assertions.

Sending this letter after six weeks means I’m just covered by the impressions/pronouncements rule. My conclusions:

● Despite all its moving parts, or perhaps because of them, the American system is working well under the Trump pressure test.

● US economic indicators are really starting to glow after eight slow years; the engine is pumping.

● Americans are as positive as ever about themselves and their country. This is a nation of gusto, from its arguments to its eats. For gastronomic gusto, order the Texas ribs anywhere, but go to Maryland for the crab cakes. For a good argument about anything, just find a New Yorker.

● If Trump doesn’t eat himself to a heart attack with all those extra helpings of dessert, he’s got every chance — based on the economy and the way America treats sitting presidents — of getting a second term. To be rejected by two-thirds of Americans and embraced by one-third could be enough — he’s done it once.

On the system working as it should, one of the great pleasures of eating breakfast in America is still the chance to consume the New York Times, the Washington Post and the Wall Street Journal. For an old hack, this is bliss. After forty-five years as a journo, I’ve a simple answer to that question about which books most influenced my life: newspapers.

The Donald is a magnificent challenge for American journos. The Times and the Post have been exemplary. New players like Politico are doing lots of lifting. Hard times demand hard news. Strange times can be strangely stimulating for hacks, and they are serving America well.

The crumbling foundations and facades of the media world may mean this is the last great newspaper war between the Times and the Post. But what a great and worthy war, fought for and with the best traditional weapons.

The walk down Pennsylvania Avenue between the US Capitol building and the White House takes you past Newseum, a museum dedicated to the role of a free press in a democracy. Carved into the front wall, a couple of storeys high, are the words of one of the most profoundly revolutionary texts ever proclaimed by government: the US First Amendment, guaranteeing freedom of religion, speech, the press and assembly and the right to “petition,” or argue against, your own government.

It’s emblematic of the afflictions of American newspapers that the Newseum is in financial trouble. The America of the First Amendment, though, is doing fine despite the Trump stress test.

On any given day, the Times or the Post can make you confident about both America and its journalism. Indeed, the Sunday New York Times shines as a weekly expression of the American experience; on a good weekend, make that the American civilisation in all its hues.

While the Post and the Times are feeding on the richest of meat, the poor old Wall Street Journal is on a leash. Its owner, Rupert Murdoch, isn’t going to have his newspaper upset his regular telephone conversations with the president.

The Post and the Times are living out the injunction of the playwright Arthur Miller: “A good newspaper, I suppose, is a nation talking to itself.” The Journal is a good newspaper that won’t say boo to the president — it’s much the same as Australia’s own policy in dealing with him.

In fact, seeking to accommodate rather than confront Trump is shaping up, unfortunately, as good long-term planning. Americans do one great favour to sitting presidents — they re-elect ’em. Landing the top job is extraordinarily tough. Doing it is nigh impossible. Getting re-elected is the oft-recurring gift.

Dating the modern superpower presidency from Franklin D. Roosevelt, the re-election prize has been granted to FDR (thrice), Truman, Eisenhower, Nixon, Reagan, Clinton, George W. Bush and Obama. The oncers were Kennedy (denied by a bullet, not the voters), Ford (never elected in the first place), Carter and George H.W. Bush. Carter and George H.W. were beaten in their second-term quests by the US economy and better political campaigners.

More than three years from the next election, Trump’s qualities as a politician, plus the healthy economy, have him well placed to be a twicer. Sorry about that. Prepare for seven more years.

The economic part of the equation looks good for Trump because it’s so positive for America. The recovery has entered its ninth year and is no longer limping; humming can be heard. Unemployment is below 4.5 per cent and labour shortages mean that after decades of stagnation, workers’ median earnings have been rising for a couple of years.

With more than two million jobs a year being created, the optimistic view is that America’s workers are coming into a “new golden age.” Imagine what the Trump megaphone could do with a golden age: a perfect period of platinum perfection, perhaps?

The scariness of Trump as a leader shouldn’t obscure his qualities as a politician. As he was beginning that extraordinary run, back in January 2016, he boasted, “I could stand in the middle of Fifth Avenue and shoot somebody and I wouldn’t lose voters.” Turns out, that’s kind of true.

Indeed, if two-thirds of the electorate hate him, that passion reinforces Trump’s electoral base. As long as one-third of voters stay solid as Trump’s core support, he can build to repeat his electoral performance in November 2020. Constantly taunting myriad enemies is Trump’s pleasure, doing dual duty as political strategy.

He doesn’t have a political agenda that normal politicians recognise. The agenda is the glory of the Donald. Trump has done more than make a hostile takeover of the Republican Party — he aims to turn the base against the Republicans, plus gather a lot of equally disgruntled Democrat voters.

The Republicans created the conditions for Trump’s rise — nativist, even nihilistic — and now the president uses those conditions against the party. This is not so much reap what you sow as ride your own whirlwind.

One of the strange safety valves of the Trump style is that none of his courtiers are yet able to do much of the deep stuff either. To survive in the Trump court, the courtiers must court the king. Lots of key middle- and upper-level jobs in the administration are still vacant. Running the White House as reality soap opera takes a lot of time and energy. If you spend most of the day just handling the king, what else can you handle?

Trump’s only steady vision is reserved for the mirror.

Railing against “the system” — the promise to drain the Washington swamp — got him elected. Now he can’t give up the habit. Consider the strange sight of a president ranting against his own powers and berating his own party. He will happily wreck a lot of stuff in Washington — what I call structural damage — but he shows little ability to build much new.

Well into the first year in office, we have plenty of episodes to understand the stock scripts of this reality show. Trump’s actions can be nasty and dangerously random, yet Trump’s temperament tics are becoming wearily familiar. We don’t know what the forty-fifth president will do, but we do know how he does it.

The narcissist loves himself by loving an argument with anybody. The volume is set to maximum — whether it’s to argue with North Korea about nuclear war or with NFL footballers kneeling in protest during the national anthem.

Nuclear annihilation or NFL knees: in Trumpland, the tone and temper are the same. Maximum Donald. Always. It’s dark and mordant stuff, as bizarre comedy dances on the edge of apocalyptic tragedy.

The world is a giant TV, and Trump sits in front of the screen, zipping through channels, yelling his responses at the shifting images.

The political mantra about letting the candidate be genuine, to be a true expression of his or her own personality — rendered in the stock line, “Let Donald be Donald” — has reached a weird epiphany. The Donald being Donald is about little else but Donald; much lies beyond his standard range (or rage). The limits of the personality offer some hope about limiting the damage. He is better at invective than invention. He does chaos, not creation.

America is set to lose much — not least, a lot of its standing as an international leader. But it’s a diverse and dynamic nation. The economic and legal foundations are deep and strong, even as the society and the politics morph and mutate and shift and sizzle. The place is so robust it can even survive Donald Trump at the helm. God bless America — because, by God, it’s going to need all the strength it can muster. ●

Graeme Dobell is Journalist Fellow at the Australian Strategic Policy Institute. This article draws on his recent columns for ASPI’s Strategist.

Reading about a revolution

Detail from the last known photograph of Tsar Nicholas, taken at Tsarkoye Selo after his abdication in 1917. Library of Congress 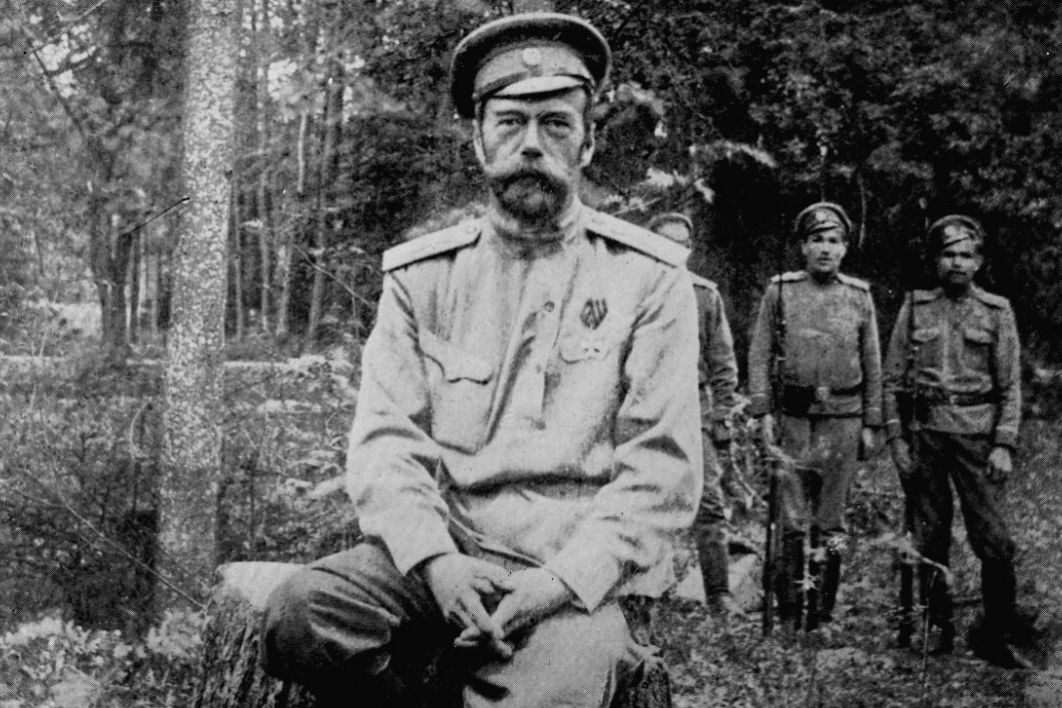 Detail from the last known photograph of Tsar Nicholas, taken at Tsarkoye Selo after his abdication in 1917. Library of Congress