British India: the case for the prosecution

As a superannuated chalkie of sorts, I had read only a few pages of Inglorious Empire before I thought, “What a wonderful book this would be to teach from.” It’s witty and fast-paced, the what-ifs and what-might-have-beens set up to provoke discussion. And the author’s digressions, sometimes more enthralling than the topic under discussion, raise important questions about who he is, the country that has made him and how he manages to pack so much living into one life.

Shashi Tharoor is as sleek as Malcolm Turnbull, as prolific (almost) as Thomas Keneally and as big a media tease as Nick Xenophon. There’s nobody quite like him in Australia. (This book, he writes, would not have been finished without the “generous hospitality and support” of the King of Bhutan, who enabled him “to escape into the mountains of his beautiful country and write undisturbed”… as one does.)

Inglorious Empire originated in a debate at the Oxford Union in 2015 on the proposition that “Britain Owes Reparations to Her Former Colonies.” Speaking for the affirmative, Tharoor won in a trot, and the video of the event got three million hits on a single site. Organised as if it were an elaboration of Tharoor’s notes for that debate, Inglorious Empire lays out the evidence that the British empire harmed India and its people in ways that still torment the subcontinent. Nearly 200 years of rule by people who had no stake in the land except as a source of wealth produced famine, environmental degradation, social enmity and the deaths of millions.

Tharoor opens with an account of the opportunistic conquest of the subcontinent during the eighteenth and early nineteenth centuries, a period in which East India Company employees and adventurers grew rich at the expense of Indians of all classes. Of those often brutal events, the grisliest came in 1769–70. The East India Company, having become the de facto ruler of Bengal only five years earlier, was determined to extract revenue and satisfy shareholders in London. It had no intention of mitigating a shortage (but not a complete absence) of food that led to the deaths of between ten and twenty million people.

That, Tharoor points out, was the beginning of British rule. Throughout the nineteenth century, famines were sporadic and famine deaths treated as normal and unavoidable. Another Bengal disaster came at the end, when another three million people died in 1942–43 as a result of wartime dislocation, incompetence and a bloody-minded belief among British rulers that European food stockpiles were more important than Indian lives.

Succeeding chapters address characteristics that, in the old days, were supposed to represent “the benefits of British rule.” Chapter 2 argues that the empire did not unite India. Chapter 3 contends that democracy and the rule of law were honoured in the breach more than the observance, were poorly established, were never properly funded and left a legacy of inappropriate practices and structures. Chapter 4 focuses on “divide and rule,” arguing that it suited British authorities to deplore, with crocodile tears, antagonism between Hindus and Muslims and at the same time to keep such pots simmering. Chapter 5 batters the idea that the rulers were benign agents of a “civilising mission.” With exceptions, Tharoor says, the vast majority were in India for as short a time as possible in order to earn the security to retire “home.” As further examples of the immorality of empire, he points to indentured labour and the opium trade, from which the government of India received substantial revenues well into the twentieth century.

In his sixth chapter, “The Remaining Case for Empire,” Tharoor takes apart the essay topic imposed on Indian students for generations: “The Benefits of British Rule.” Successful students were expected to reel off a list that included the railways, education and the English language. The railways were built to enrich British investors, move troops and extract raw materials. The English language aimed to colonise Indian minds and create caricature Englishmen like Nirad Chaudhuri, the anglophile Bengali writer, a favourite target of Tharoor’s. And the education system was woeful, pathetically funded, and created to manufacture low-cost clerks. Tharoor notes that he and his classmates were still getting fed Kipling in the 1970s (he was born in 1956) and that, as a student, he wrote his own wind-up to “The Ballad of East and West”:

East is East and West is West,
And never the two shall meet,
Except of course when you lie crushed
Under the Briton’s feet.

There were, though, a few minor benefits of British rule: Shakespeare, tea, cricket and P.G. Wodehouse, who “is loved by Indians who loathe Kipling and detest the Raj.”

Tharoor’s summing up comes in “The (Im)Balance Sheet,” in which he concludes that the “British state in India was… a totally amoral, rapacious imperialist machine bent on the subjugation of Indians for the purpose of profit.” A final chapter, “The Messy Afterlife of Colonialism,” argues that much of the distress of South Asia over the past seventy years can be traced to the mess that foreign rule left behind.

As Tharoor points out, there is nothing new in his critique: “similar things had been said by Indian nationalists in the late nineteenth century.” Dadabhai Naoroji published Poverty and Un-British Rule in India in 1902, the same year that the first volume of Romesh Chunder Dutt’s Economic History of India appeared. Both made detailed cases about the economic exploitation, despoilment and impoverishment of South Asia resulting from factors including the destruction of the textile industry and the enforcement of inflexible land taxation.

As a teaching tool, Inglorious Empire has enough over-egged puddings to keep attentive readers (and students) on their toes. Tharoor gives Kerala, where he holds a parliamentary seat and from where his family comes, a particularly rosy-spectacled treatment. As a politician with an election coming in 2019, he has good reason not to give voters cause for complaint. But readers may want to do a little more enquiry around the assertion that it was St Thomas the apostle who made Kerala’s first Christian converts, that “the first recorded instance in Kerala of violence involving the Muslim community” was in 1920 and that one of Kerala’s old princely states, Travancore, “became the first government in the world to decree universal, compulsory and free primary education for both boys and girls” in 1819. Kerala has had remarkable educational attainments, but “universal” and “compulsory” primary education in 1819 was not one of them. Travancore still struggled to get lower-caste children into schools a hundred years later.

There are assertions in the book that will set readers back on their heels (having hitherto been on their toes) and make them think about the meaning of words. “The thirty-five million who died of famine and epidemics during the Raj,” Tharoor writes, “does remind one of the twenty-five million who died during Stalin’s collectivisation drive.” It’s a question for an ethics as well as a history class: is “structural violence” — everyday systematic, inescapable deprivation that leads to immiseration and death — different from death squads?

The what-ifs in the book will also spark discussion. “Thanks to British imperialism, the organic development of the Indian state… could not take place, as it did… in Europe,” Tharoor writes. Well, yes, an Indian version of Bismarck’s Germany or Meiji Japan might have come about. But at this point — if you were setting an exam — you would give the instruction: “Why or why not? Support your answer with evidence.”

Inglorious Empire has another virtue as a teaching book: it invites discussion of sources and citations. Tharoor is immensely well read and has had some talented researchers working with him. But publishers of popular books don’t like footnotes giving sources. Footnotes put off readers, they say. Instead, this book sends curious readers to the back of the book. There they will find a few words in boldface type from the relevant section of the text and then a source for the statement.

For anyone wanting to evaluate evidence, it’s an annoying method and allows some assertions to dangle tantalisingly. A delicious vignette on page 84 about a forestalled annexation of Kashmir has no reference at all. In a classroom, the absence would provide a welcome lead-in to a discussion of the need to “cite your sources.” When one checks the origins of the Kashmir story, they appear less colourful than Tharoor’s version.

The clinching element in making this such a suitable book to provoke a want-to-know attitude about modern India lies in the interest it arouses about the author himself. The publisher’s note says this is Tharoor’s fifteenth book, and his Wikipedia entry declares that more than 50,000 copies have been sold. From 1978 to 2006, he worked at the United Nations, ten years as an under-secretary-general. He had a run for the secretary-general’s job in 2006. Today, he’s a two-time member of parliament for the moribund Congress Party. He’s been married three times. He’s only sixty-one, which by Indian standards gives him at least twenty years of vigorous political life ahead. As one marvels at his capacity, energy and restlessness, and notes (on page xxi) his cordiality with the Bharatiya Janata Party’s prime minister Modi, it’s hard not to wonder where both Tharoor and India go from here. •

Robin Jeffrey is a retired academic. His new book, Waste of a Nation, about garbage and sewage in India, written with Assa Doron, will be published early next year by Harvard University Press.

Essays & Reportage “Before Noumea, there was only London, Washington and Ottawa” Nic Maclellan 18 September 2020 Eighty years after helping defend New Caledonia against Japan, Australia is mobilising to counter another rising Asian power 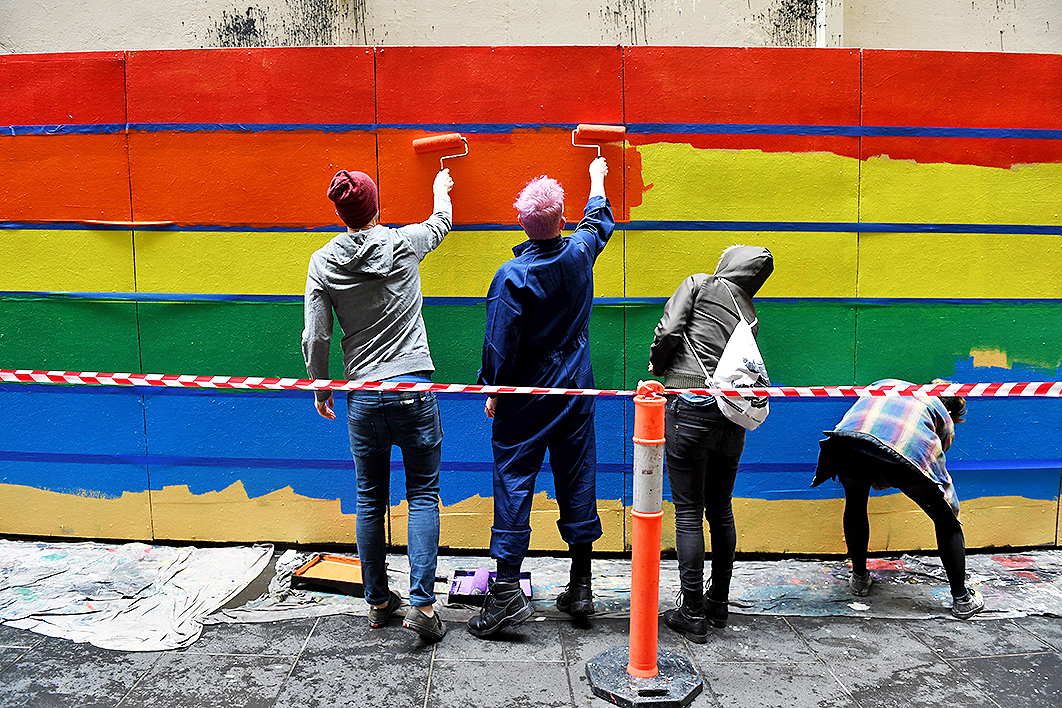