As Australia “rediscovers” India yet again, are its secular forces starting to push back? 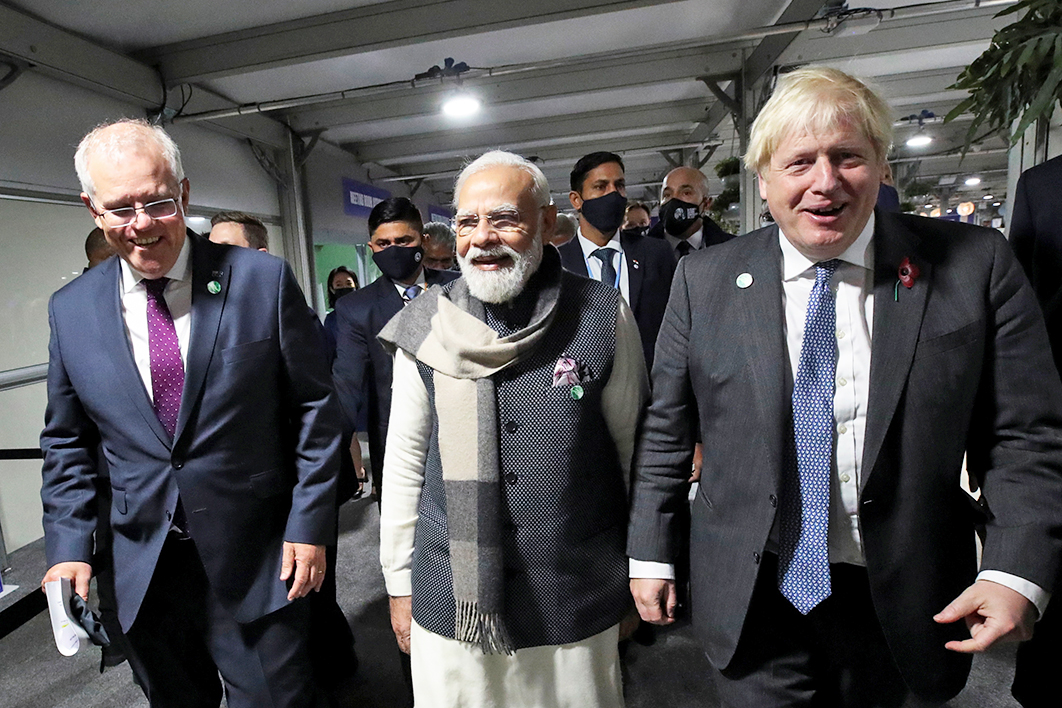 Canberra is investing great hopes in India to help counter a more assertive China, both as a military ally in the “Quad” with the United States and Japan, and as another huge market to diversify our highly China-dependent trade. But a lot of these hopes are uninformed and unrealistic, with a danger that this latest embrace will follow the same pattern — bafflement, disappointment and retreat — as previous “rediscoveries” of a “neglected” India by just about every incoming Australian government since the modern Indian state emerged in 1947.

Melbourne University’s Michael Wesley goes through some of this history in his lead essay for Australian Foreign Affairs. He shows Australia clinging to its diminishing status in London as one of the “white dominions” and then falling in with the United States in its suspicion of India’s Soviet ties and sanctions over its nuclear tests — before having to play catch-up when Washington, London and Paris decided a nuclear Indian superpower was needed.

Wesley points out the dilemma for Canberra. “Its foreign policy has tended to be ‘heliocentric’ — the major elements of its statecraft are shaped by its commitment to a single major ally,” he writes. That single ally — first Britain, then the United States — has always been culturally similar. “Heliocentrism has enshrined a presidential element to policy formulation, with the prime minister taking personal charge of relations with the major ally. It has also resulted in Australia looking at the world from the same perspective as a global power, rather than as an isolated country with limited capabilities.”

Hence our expectation to be heard in global councils, our willingness to join military expeditions, and our past contempt for Jawaharlal Nehru’s non-aligned foreign policy. In return, we drew contempt from New Delhi’s external affairs ministry, its suspicion of America only recently fading, as the monkey to the Washington organ-grinder.

This heliocentrism is now deeply challenged, says Wesley. “The US investment in a relationship with India signals an admission that America has neither the capacity nor the stomach to face China alone. Washington has ceded its pre-eminence in the Pacific to an order in which China and the United States become two among a series of great powers — including Indonesia and Japan — seeking to prevent any single state from dominating the region.”

This shift has clearly not yet sunk in among Canberra foreign policymakers. Our diplomats and security analysts are still pushing for India to stop acquiring Russian-supplied armaments and buy American in the name of “interoperability” with the other Quad members. With New Delhi proceeding with the purchase of the powerful S-400 air defence system from Russia in spite of threatened US sanctions — a similar purchase got NATO ally Turkey barred from the F-35 fighter program — Canberra will be put in an awkward spot if neither partner backs down.

India is unlikely to transform into another dutiful US ally like Japan and Australia. But it would help us adjust out of heliocentrism if India displays the kind of kindred liberal democratic and free-market values cited by exponents of a closer embrace.

Will it? Indian journalist Debasish Roy Chowdhury and Sydney University political scientist John Keane offer a dismaying portrait of neglect and institutional decay. The world’s “biggest democracy” is an “endangered” one in its “death stages,” characterised by dark money, manipulated media and muscle power, its people at risk from toxic air, poisoned water, and (as Covid has shown) disease.

The authors of To Kill a Democracy believe the seeds of decay were planted soon after independence when Nehru echoed the 1835 advice of Thomas Babington Macaulay that higher education for the upper classes was more useful than basic education for the masses. In Nehru’s case, he wanted brains to run the institutions of state and his new industrial “temples of modernity.”

That neglect has left India with an employment gap between agriculture and the booming but relatively low-labour services sector. A huge pool of jobless young has been waiting for a demagogue like Narendra Modi to enlist them as stormtroopers in a quest to turn the secular Indian state into a Hindu one.

A first-past-the-post electoral system allowed Modi’s Bharatiya Janata Party to translate a 37 per cent vote into an absolute majority of seats. With anti-defection laws reducing MPs to ciphers, cabinet cowed and civil servants at risk of transfer to remote posts, Modi and his authoritarian home minister Amit Shah are the government. That makes for decisive but sometimes disastrous decisions, as when Modi suddenly “de-monetised” large-value banknotes in 2016 in an effort to flush out the black economy. Representing 86 per of cash in circulation in an economy overwhelmingly reliant on cash transactions, the move paralysed the economy.

The book’s most dispiriting passage concerns the abject complicity of the widely respected Supreme Court of India, under former chief justice Ranjan Gogoi, in Modi’s manoeuvres against Muslims, notably his overnight abolition of Kashmir’s autonomous statehood and his National Register of Citizens, which was used to remove citizenship from some 1.9 million Muslims in Assam.

All this has been played down by Quad enthusiasts. Modi has had a warm rapport with Tony Abbott, Malcolm Turnbull, Scott Morrison, Shinzo Abe and Donald Trump. As Wesley writes, “There are elements of his populist political style and can-do approach to governance that appeal to conservative leaders, who are more likely to overlook his government’s chauvinistic approach to communal relations at home.”

Fortunately, Australia’s Indian diaspora seems to be bringing the best of India with them, eager for space, a clean environment and less competition for jobs. Aarti Betigeri, a journalist living in Australia, writes a stand-out essay for India Rising? from inside this diaspora, which is, or soon will be, our biggest new migrant cohort and one that is moving rapidly up the echelons of our institutions and companies — though not yet in politics, as its numbers would suggest, because it associates in divergent language, caste and other interest groups.

Betigeri believes the hunger to migrate has been thoroughly exploited by Australia:

We have set the intake pipeline so that it benefits Australia at every stage. First, students pay huge sums of money to study here (usually it’s their parents’ life savings, or land is sold to finance the fees). Then, while they’re studying, they provide a cheap, readily available and compliant source of unskilled labour. After graduation, they take on unpaid internships of three to six months, living off their savings, or fitting in overnight shifts at the servo to pay the rent. Then they emerge, fully trained, with an Australian education, ready to join the workforce, fuelling our economic growth. At every stage, the benefits are stacked in Australia’s favour. The house always wins.

The ever-higher bar of Home Affairs criteria for converting temporary residence into citizenship is another grievance. The Morrison government’s treatment of foreign students during the pandemic — go home or fend for yourselves — and its ban on flights from India at the height of the Delta variant panic have hardly improved Australia’s external image.

That adverse perceptions are prone to persist is shown in Harsh V. Pant’s essay for India Rising? on the view of Australia from India. He opens by recalling the wave of attacks on Indian students in Sydney and Melbourne in 2009–10, which he accepts as mostly racially motivated and epitomising a “social and political gap” between India and Australia. But street-level enquiries by Indian diplomats revealed that nearly all the attacks were made by disadvantaged teenagers set on stealing mobile phones and bling from relatively well-off students in the outer suburbs to which they had been dispersed by the gentrification of old inner-city student quarters,.

From New Delhi, Amit Dasgupta, the Indian consul-general in Sydney at the time, tells me, “I had said then and maintain even now that, with the exception of a few, the majority of the attacks were not racist and to allege them as such is incorrect.” That even Pant, a professor in international relations at King’s College, London, is still swayed by the hyped-up “news” generated by India’s hectic new electronic channels and websites illustrates the dangers of a debased media that has only flourished and become more chauvinist under Modi.

Such is the degree of intimidation that Oxford University Press has opted out of producing a cheaper edition of the Roy Chowdhury and Keane book for the Indian market. This followed a warning in the journal of the Rashtriya Swayamsevak Sangh, the militant Hindu-nationalist movement from which Modi sprang.

While the strategic partnership between Australia and India won’t follow the US alliance model, economic ties seem likely to grow steadily, and an essay about this would have rounded out this issue of Australian Foreign Affairs. The Morrison government is again talking up the free-trade agreement shelved soon after Abbott and Modi announced talks. This is again raising unrealistic hopes.

As Peter Varghese, author of An India Economic Strategy to 2035 for the Australian government, put it to me earlier this year, India is “deeply protectionist and unlikely to fundamentally change.” He says India is an “investment story” requiring Australian businesses to get in behind India’s protective barriers and develop a domestic business — a big call for Australia’s parochial and short term–minded business community. “I think it would be a mistake to overinvest in getting a free-trade agreement done because it will just distract the relationship for a considerable period of time with a limited prospect of success,” Varghese said. “And there’s a heck of a lot of things you can do without an FTA.”

On the shared values front, the old secular India may be pushing back. As Roy Chowdhury and Keane admit, India may still have the world’s largest pool of illiterates, but adult literacy grew from 12 per cent in 1947 to 74 per cent in the latest census, in 2011. Mobile phones and the internet have empowered and enlightened, as well as being channels for bigotry and porn. Political cultures in the non-Hindi language states and lower-caste mobilisation also stand in Modi’s way: in the important West Bengal state elections this year, the fiery chief minister and leader of a Congress Party splinter, Mamata Banerjee, roundly beat Modi’s BJP.

The Supreme Court may also be regaining its nerve under a new chief justice. This year it accepted public interest litigation from a group of Modi critics who found their mobile phones infected by Israeli spyware available only to governments. The court rejected the government’s attempt to assert national-interest secrecy, and set up its own independent commission to investigate.

And this month, Modi abruptly announced the withdrawal of his new agricultural laws that would have ditched guaranteed prices and government purchases of major crops, and left individual farmers to deal directly with emerging giant retail chains. Until suspended by the Supreme Court in January, the laws drew a blockade of New Delhi by farmers and their tractors. Over 600 died in clashes with police, as Modi’s spokespeople called the protesters “traitors” and “terrorists.”

With state elections approaching in Punjab and Uttar Pradesh, from where many of the protesting farmers came, the Indian prime minister is backing off. Perhaps we have seen peak Modi. •

Hamish McDonald was a correspondent in New Delhi for the Far Eastern Economic Review 1990–95, and wrote Mahabharata in Polyester: The Making of the World’s Richest Brothers and Their Feud (NewSouth, 2010).