Can the drift be stopped? 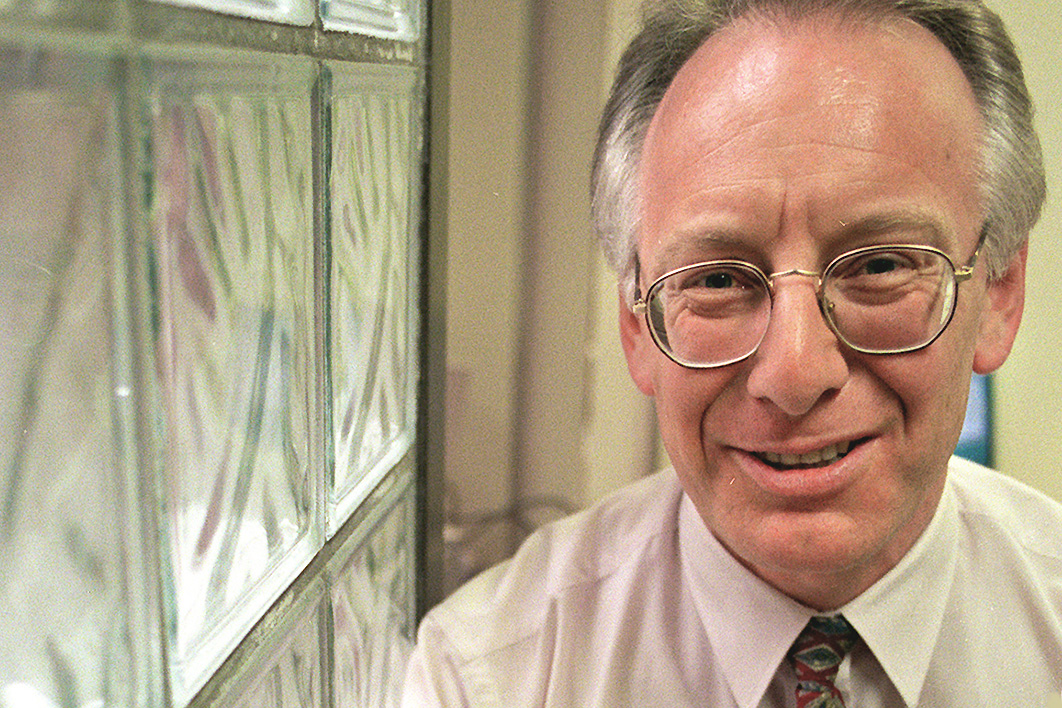 Just over three years ago, when Benjamin Netanyahu made the first visit to Australia by a serving Israeli prime minister, the reception in the Jewish community seemed as effusive as it could get. Many of our own politicians lined up to be photographed with him.

If Netanyahu was contentious then, he is even more so now. Two Sundays ago he achieved another first as prime minister, appearing in a courtroom on corruption charges, having felt no obligation to resign from office and having announced his intention to annex large swathes of West Bank territory previously earmarked for an eventual Palestinian state.

Perhaps not surprisingly, events in Israel have caused a shift within Australia’s 120,000-strong Jewish community, and it has been reflected in the formation of their delegation to the World Zionist Congress in October. The five-yearly congresses are an important opportunity for political representatives from Israel to hear how diaspora supporters of Israel as a Jewish homeland feel about their policies.

In a consensual process just completed, eight members of the small Australian delegation (just thirteen out of 500 congress delegates) will be representatives of “progressive” or liberal Jewish organisations, either secular or from the like-minded religious streams known as “Reform” and “Conservative.” The other five delegates will speak for the Orthodox religious stream and groups like Friends of Likud, which generally support the steady push by Netanyahu and his Likud party for Israel to fully absorb the West Bank areas they call by their Biblical names of Judea and Samaria.

A notable new voice in the progressive majority is a secular coalition calling itself Hatikvah (“The Hope”), the title of the nineteenth-century poem that became the lyric of Israel’s national anthem. It wants Israel to “fulfil its destiny as a just, free homeland for the Jewish people” that also “lives in harmony with its neighbours and upholds the rights of all its citizens.”

Hatikvah has managed to pick up two places in the delegation. Leading the push for support during the formation of the delegation were Liam Getreu and Maddy Blay, respectively from local groups Ameinu, which is aligned with the Labour Party in Israel, and Meretz, aligned with the greenish-secular Meretz party. Behind Hatikvah is a new voice in the Jewish community, the online magazine Plus 61J, established in April 2015 and edited by liberal journalist Michael Visontay. Strongly focused on the Israel–Palestine question, Plus 61J declares itself “pro-Israel, pro-peace, pro–human rights” and supportive of a two-state solution.

Joining the Hatikvah ticket was the Melbourne venture-capital entrepreneur and longstanding supporter of Israeli–Palestinian contact, Ron Finkel, who modelled the push for places at the World Zionist Congress on a Hatikvah ticket for the big United States delegation organised by his American friend Kenneth Bob, long active in Ameinu and a board member of the American liberal Jewish group J Street.

Finkel says that the Jewish community in Australia, “or at least a large chunk of it,” had begun to “tune out” from Israel because of alienation from the values shown by the Netanyahu government. “The drift has been clearly in the direction of non-engagement,” he tells me.

That was not the Jewish voice heard by the wider public, however. “You have those who are dyed-in-the-wool Israel über alles and they seem to have by and large effective control of communal institutions,” says Finkel. “They are the voice you hear through the ECAJ [Executive Council of Australian Jewry], through various state councils, and if that is all that there is you would come to the very rapid view that these sentiments reflect ‘the Jewish community.’”

A group of Jewish Australians decided they wanted to promote a different viewpoint. “We have got to make it clear that there is a voice in the community that reflects core progressive Zionist values, that they’re still relevant,” says Finkel, “even though progressive Zionists don’t have much say in Israel at the moment. And that’s good because it’s the first time in a long time that progressive Zionists of all ages have decided to stand up and say: this is what’s going on.”

As well as sending representatives to the congress, Hatikvah wants to work in a more engaging, structured way to gain a voice within the Jewish community. “We don’t want to be outside the tent pissing in. We want to be inside the tent and being part of the shaping of communal strategies.”

Already the group has put out two statements, one on climate change and one on the Uluru Statement from the Heart. “We are not trying to replace organisations that are active in this space, but we want to make it clear these are issues that speak to us, that are important to us as Australian progressive Zionists, and we’re involved,” says Finkel.

All this is encountering some resistance among some older, established community figures. “They can’t grasp, they can’t get their heads around the idea that you can be critical of policies of the current government of the state of Israel, fight for the rights of oppressed minorities in Israel whether they be Ethiopians or different segments of the Arab populations, or point out Israeli soldiers can do obnoxious things,” says Finkel.

He believes these sentiments are understandable, especially in Melbourne, which had the highest postwar concentration of Holocaust survivors, per capita, outside Israel. “You can’t blame them when your family has gone through the horrors and as a young person in 1967” — during the Arab-Israeli war — “you thought there was a likelihood that a new holocaust was going to be perpetrated on the state of Israel.”

After the past year’s three Israeli elections, each of which resulted in a stalemate, Netanyahu is still in power. He has stared down his rival, former defence chief Benny Gantz of the Blue and White party, and persuaded him to accept second place in a governing coalition. So precarious is the political balance that the government includes fully thirty-six ministers and sixteen deputies, some with invented portfolios and no clear responsibilities, in a Knesset of only 120 members. Crucially, Netanyahu retains control of the law-related portfolios.

Israel’s High Court allowed Netanyahu to stay in office while being tried on charges of receiving gifts and favourable media coverage in return for political favours, partly because of the presumption of innocence and partly because prime ministers, unlike ordinary ministers, are not explicitly prohibited from doing so.

“A situation in which a defendant charged with serious ethical crimes forms a government and heads it raises a public and moral problem whose magnitude is hard to overstate,” said Justice Menachem Mazuz in his judgement. “Such a situation reflects a social crisis and a moral failure by both society and the political system.”

Still, Netanyahu is doubling down, announcing he will start annexing some 30 per cent of the West Bank, including many of the Jewish settlements there, on 1 July. Gantz has acquiesced as part of the coalition agreement. Cynics believe that Netanyahu, while advancing the Israeli right’s perception of an ancient destiny, also hopes to project himself in court as a heroic statesman rather than a slippery politician.

The start on annexation may be more token than real. While the American right and its evangelical component might support the aim, even Donald Trump’s administration seems to be telling Netanyahu to slow down. It wants presidential son-in-law Jared Kushner’s “peace plan” — land for Israel, cash and connecting freeways for the resulting Palestinian enclaves — to stay in play.

Formal annexation would sever Netanyahu’s new dialogue with conservative Arab governments and possibly set off a new Palestinian intifada. It would not be recognised by most European nations, nor by Washington if Joe Biden becomes president.

Hatikvah still holds the hope that the two-state solution can be revived. “What’s happening in the trajectory of both sides has been a continuous path of delegitimisation to now, unfortunately, many elements of dehumanisation,” says Finkel. “And so that chasm is getting bigger, so we have to try and bridge it, and the only way to bridge it is bringing people in touch with each other so they can realise that not every Palestinian is a murderous terrorist and not every Israeli is a bloodsucker. The need to inject humanity into the relationships is paramount.”

Palestinians would find “an incredibly receptive” audience in Israel if they changed their discourse to frame their aspirations as a civil society alongside Israel, Finkel believes. At the same time, Israel should restrain its “messianic” expansion. “All these steps towards colonisation or the settlement enterprise are a cancer on Israeli society,” says Finkel. “They are really going to put a stake through the heart of the Jewish future in Israel if they don’t step back from it.

“But I am an optimist and I certainly believe we can get to a two-state solution,” he adds. “You’ve got to have the will in order to find the way.” • 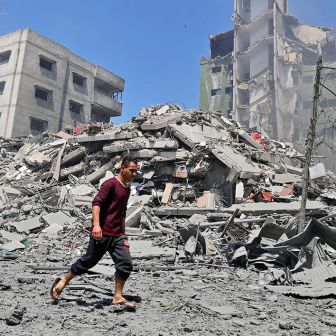