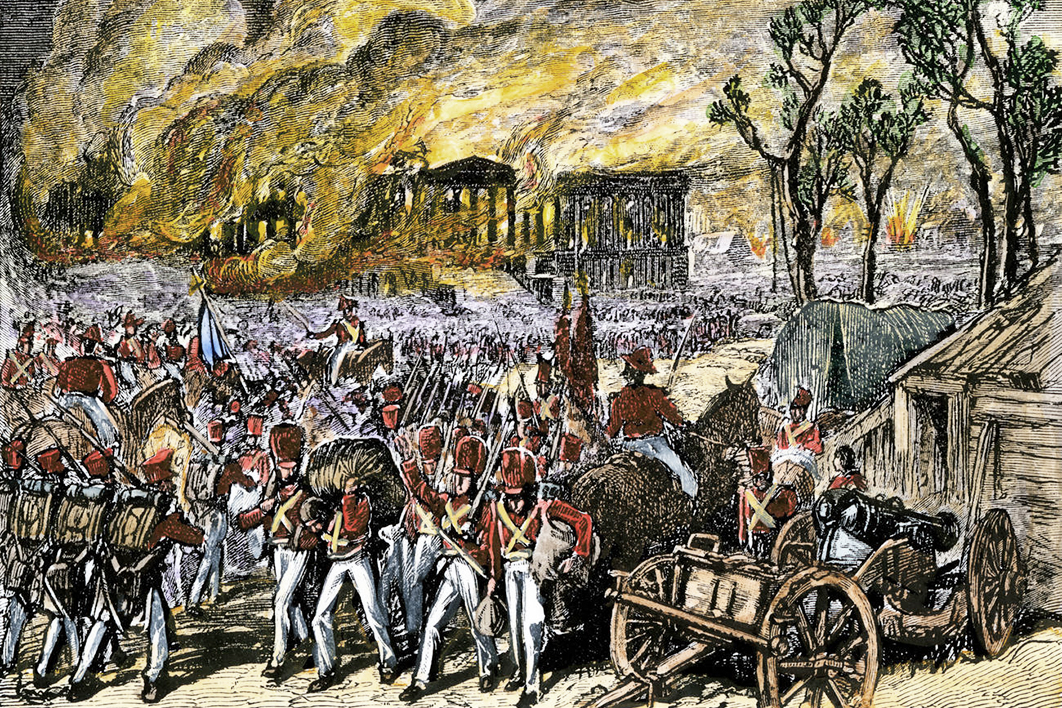 The capture and burning of Washington’s Capitol building by the British in 1814. Hand-coloured woodcut from North Wind Picture Archives/Alamy

Burning the Books: A History of Knowledge Under Attack
By Richard Ovenden | Hachette | $32.99 | 320 pages

The English poet Philip Larkin, who was chief librarian at the University of Hull for thirty-one years, observed that literary manuscripts had two kinds of value. There was their “magical value” — “this is the paper he wrote on, these are the words as he wrote them” — and their “meaningful value” — the ways in which a manuscript helps to enlarge “our knowledge and understanding of a writer’s life and work” or of history more generally. Researchers lucky enough to spend much of their lives in archives and libraries know well that double thrill of holding a writer’s actual letter or diary, written in his or her own hand, as well as deciphering its larger historical significance. Not Larkin’s diaries though — he wanted no one to read them in their original or copied form, and had most of them burned. Literary and historical records can be lost in myriad ways.

With the increasing use of microfiche and microfilm, and the wholesale digitisation of records, many more people have access to documents held in libraries all over the world. But the magic of research, as Larkin described it, is arguably fading. There is little enchantment in reading a letter copied onto microfilm or in digitised form on your home laptop. Some colleagues confess to a certain enjoyment in doing research in their pyjamas, but for many it has become a distant, technically frustrating and sometimes alienating experience.

Digitisation preserves fragile documents from wear and tear, prevents old newspapers from literally being torn apart and makes records much more widely available. Digital preservation strategies, exemplified by Trove at the National Library of Australia, have been adopted wholesale by repositories around the world. In New Zealand, the Alexander Turnbull Library has embarked on an innovative project to archive social media and websites. Yet despite the best efforts of archivists and librarians as “guardians of the past,” as Richard Ovenden describes them, valuable books, precious manuscripts and all kinds of paper and digitised records are in danger of being lost to humanity for all time. Complicit in that destruction, he suggests, are governments everywhere.

This is the urgent message of this passionate work of scholarship, which traces a history of sustained cultural loss dating back to the mythical sacking of the legendary Library of Alexandria (the symbol of “barbarity”). Later catastrophes discussed by Ovenden include the dissolution of the monasteries in Reformation England; the British military’s 1814 attack on the Capitol building in Washington, which housed the original Library of Congress; the German torching of the Library of Louvain at the beginning of the first world war; the Nazi burning of the books in Berlin in 1933; and the Serbian destruction of the National Library of Bosnia and Herzegovina, in a conflagration that lasted for three days in 1992.

But alongside these acts of destruction, archives and libraries have also suffered from routine neglect, storm damage, rain and creeping mould, the shredding of documents, official indifference and government parsimony. In Australia, as in other countries, governments have systematically cut the budgets of leading national cultural institutions, including the National Library and the National Archives of Australia, leading to protests by humanities researchers and the general public over several years. As Ovenden notes, the NAA’s advisory council warned in 2019 that annual 10 per cent budget cuts since 2014 had placed the archive “in jeopardy,” with its digital records exposed to “compromise, obsolescence or loss.” Locally, municipal libraries have cleared their bookshelves and consigned whole collections to rubbish dumps.

The ancient world understood the importance of accumulating and preserving knowledge, Ovenden writes, and so should contemporary governments. To persuade them to invest in this vital work, he adds a coda to Burning the Books in which he explains to the “holders of power” “why we will always need libraries and archives.” He suggests five crucial functions: the education of society; the promotion of a diversity of ideas; support for key civil rights and integrity in decision-making; the provision of evidence and facts; and finally the fact that libraries and archives “help root societies in their cultural and historical identities.”

In Australia, the evidence suggests that governments do understand collecting institutions’ role in educating the public and securing historical identity, which is why the Australian War Memorial has been granted — in the latest example of the militarisation of Australian history, and at a time of general impoverishment — an extra $498 million to promote and support knowledge of the nation’s military heritage and display the army’s impressive hardware. Government decisions, as Ovenden says in the introduction, are never neutral acts.

Richard Ovenden has worked as a librarian in Britain for more than thirty-five years, and since 2014 has held the distinguished post of the twenty-fifth Bodley’s Librarian at the University of Oxford. The story of the Bodleian library — rising from the ruin and waste occasioned by the dissolution of the monastic libraries in the sixteenth century, when tens of thousands of books were burned, broken up for their bindings or sold off — is central to his larger 3000-year world history.

Ovenden sees the story of the Bodleian as an exemplary tale. Out of the destruction caused by the Reformation “grew one of the most distinguished libraries in the world. In the newest part of the Bodleian, the Weston Library, there hangs a sixteenth-century painting of the man responsible, Sir Thomas Bodley.” Ovenden describes him with affection and reverence: his portrait shows “raffish charm,” he was “dressed in fine clothes,” “his beard is well trimmed, and there is a definite gleam in his eye.”

Bodley was also a benefactor, donating more than 150 manuscripts to the new library from his personal collection, including “the most sumptuous illuminated manuscript the Bodleian owns”: a copy of Alexander of Paris’s version of the Romance of Alexander. Indeed, Bodley’s commitment to his library’s future led him to disinherit his own family. Ovenden also emphasises the value placed by today’s Bodleian on giving contemporary readers access to its vast holdings: its catalogue is searched fourteen million times annually from all over the world, some 300,000 researchers use the reading rooms every year and millions more download its digital collections.

Archives and libraries are not just repositories of accumulated knowledge, however. They are also key to the writing of history, which generates new knowledge and new perspectives on the world. While Burning the Books largely offers a white Western history of masculine elites, a broader consideration of the potential uses of archival and library collections would show that historical scholarship has also been hugely important as a resource for oppressed and marginal communities seeking to secure recognition of unjust treatment in the past and acknowledgement of their history of achievement in the present.

The great African-American activist and historian of slavery and radical reconstruction, W.E.B. Du Bois, knew well the importance of archival research and the writing of history to his people’s quest for justice. In his later years he became more convinced about the central role of history in defining people’s humanity, and thus who qualified for human rights, and published The World and Africa: An Inquiry Into the Part Africa Has Played in World History in 1946. Women too saw the importance of writing women’s history — their history of oppression and achievement — to their struggle for equality. One of the most significant Australian government grants during International Women’s Year made possible the publication Women in Australia: An Annotated Guide to Records, an archival project led by Dr Kay Daniels that inspired the writing of a new wave of women’s history and intertwined political activism. Contrary to claims that women’s history was impossible, Daniels and her team showed that information about women’s past lives and activities could be located across Australia in archives and libraries if people knew where to look.

We should be concerned, then, not just to preserve knowledge, as Ovenden puts it, but to generate new knowledge and new perspectives on the world, to document and historicise the experience and lives of women of all backgrounds, of different peoples of colour and of Indigenous peoples. Ovenden acknowledges the bias, gaps and silences in library and archival collections and asks that readers “remember that in the past people did things differently.” But surely the problem goes much deeper.

Ovenden conceptualises his history as the story of how civilisation was saved from barbarism, but perhaps this colonialist distinction itself needs to be challenged. For in encouraging and enabling colonised peoples to explore their “cultural and historical identities” we need to broaden our understanding of what constitutes knowledge and where it is located — not just in the papyrus, parchment, paper and digital files found in libraries and archives, but also in the landscape, in collections of caves and trees, in ceremony and craft work.

Rock paintings — such as the 40,000-year-old art recently destroyed by Rio Tinto in Juukan Gorge — and the birthing and directions trees between Buangor and Ararat held sacred by the Djab Wurring, river red gums thought to be more than 600 years old, certainly have “magical value” as well as “meaningful value,” to invoke Philip Larkin. Moving beyond the civilisational conceits of the Old World we must surely demand that these priceless records of human history also be treasured and preserved. •

Marilyn Lake is Professorial Fellow in History at the University of Melbourne. Her most recent book is Progressive New World: How Settler Colonialism and TransPacific Exchange Shaped American Reform (Harvard University Press, 2019).

Infantrymen near the battlefront during the Third Battle of Ypres, in which Eric Garriock died. Frank Hurley/Australian War Memorial 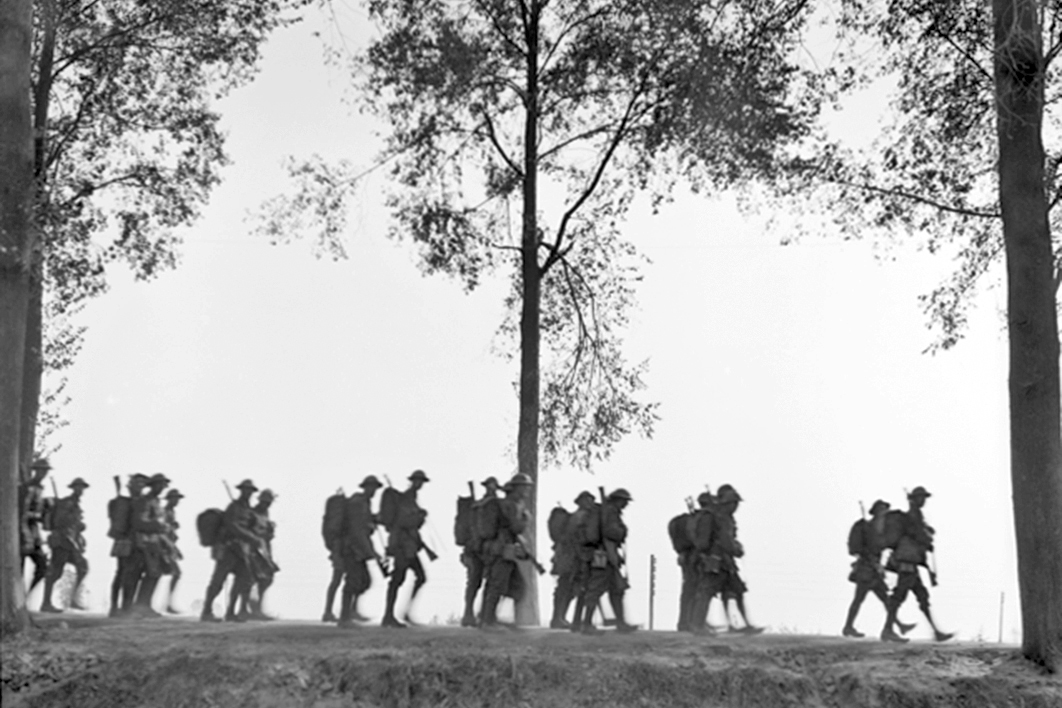 Infantrymen near the battlefront during the Third Battle of Ypres, in which Eric Garriock died. Frank Hurley/Australian War Memorial