Caught on a fast-moving train

Journalism is increasingly becoming a matter of selecting from an avalanche of material, writes Scott Bridges 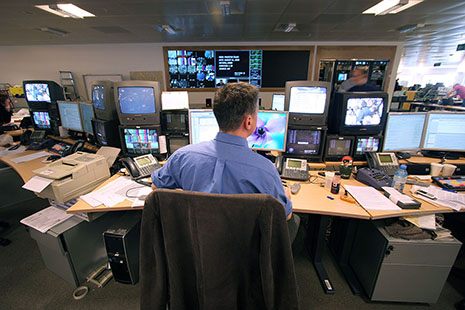 IT’S A SCENARIO that would be all too familiar to many journalists in 2013. In just four hours, Georg, an employee at a major news agency, edits or writes eighteen bulletins, makes or receives fourteen phone calls, reads nine faxes, scrolls competitors’ news tickers five times, listens to four radio news bulletins, watches TV news twice, sends twenty-eight emails and instant messages, checks his own news feeds thirty-four times, and reads dozens of press releases. He keeps up this rate through every shift, helping to produce countless thousands of words of journalism every day.

This desk-bound worker, hunched over a keyboard in front of three computer monitors, is as far as you can get from the image of intrepid journalists chasing down leads, buying informants a drink, and scribbling away in a spiral-bound notepad. Yet for the most part, this is what news in the early twenty-first century looks like: the average journalist now labours in an office-based production environment, writes Boyer, “managing multiple, fast-moving flows of information already in circulation rather than locating and sharing news.”

In The Life Informatic, Dominic Boyer examines the changing news industry by observing journalists at work, in the hope that mapping the flow of information between and within newsrooms will help us understand how news is made in today’s post-broadcast era. Boyer is ultimately successful in presenting a contemporary account of the converged newsroom and adding to a body of evidence-based thought about how to build a sustainable industry in the future.

Boyer conducted his research over several years in Germany, visiting the Frankfurt office of news agency Associated Press, an online news portal called T-online, and MDR Info, a public radio station. News organisations in Germany, he says, are facing the same challenges as elsewhere in the world, but the industry is changing relatively slowly and without panic. From these workplaces, Boyer provides exacting accounts of journalists’ jobs – jobs that are often heavily dependent on screenwork.

Screenwork, according to Boyer, creates “conditions of distraction that make paying attention to anything offscreen increasingly difficult.” Combined with the kinds of rolling deadlines that are common in today’s industry, and a sense of constant competition with other outlets, this makes it more difficult for journalists to engage deeply with the stories they’re reporting. The book paints a picture of these journalists’ “life informatic” managing ever-growing quantities of information in a “fast-time” environment, and of how changing work practices affect journalists’ perceptions of their own jobs.

At Associated Press, Boyer observed the newsroom’s “slotters” at work. (Their title refers to the old practice of directing information and allocating tasks by physically distributing paper to pigeonholes or slots.) As the example at the beginning of this review shows, a slotter’s work is extremely demanding; it’s a job that requires the experience and training to react quickly and decisively to the information flow. Fielding an average of ninety-seven distractions per hour, a slotter’s shift is limited to five hours because of the extreme concentration required.

Boyer foregrounds the normally invisible aspects of news production. With publishers and broadcasters increasing their reliance on wire material, news agencies in Germany and elsewhere have become the workhorses of the industry. Among the four largest international agencies, the average word length of reports increased by about 15 per cent and total output increased by 50 per cent between 1989 and 2005. Agencies are also producing increasing quantities of publication-ready content for clients to cut-and-paste into their own publications without editorial intervention.

Boyer also visited the newsroom of T-online, an online news portal which largely aggregates content from elsewhere (roughly equivalent to ninemsn or Yahoo7 here in Australia). Online news services like these are a lightning rod for debate within the industry about exactly what does and does not constitute journalism. One German radio journalist suggested to Boyer that “these online providers essentially take news that is already out there and try to repackage it somehow to gain extra advertising revenue… [T]hey’re in the journalism aftermarket, like used information dealers.” And while it’s true that T-online generates almost no original content, the journalists working there fiercely defend the value they add as journalists by doing additional online background research, rewriting copy to better suit their audience, and adding multimedia elements.

T-online, like other online sites, exists in a permanent feedback loop where most editorial decisions are made in response to metrics. Like a film’s opening weekend takings, a story’s initial hit numbers provide the newsroom with vital data on how the audience is reacting. While this instant feedback allows these sites to tailor their coverage to their audiences’ desires, the focus on clicks tends to lead to shallow coverage, a link-bait culture, and skewing of information. One journalist admitted to Boyer that teasers at T-online are written with “strategic over-emphasis to generate click-throughs.”

Finally, Boyer studied MDR Info, a public radio station in Halle that forms part of the German national public radio network. Public broadcasters are often perceived as bucking the fast-time trend embraced by the rest of the industry, but Boyer says the reality is different. One journalist at MDR Info noted that the converged newsroom environment has affected journalists’ work in many ways. Journalists there are required, for example, to write in a style that allows their work to be automatically uploaded to the web after being used as radio scripts. This creates a tension between the unique requirements of broadcast journalism and the demands of online journalism, and generates some hostility in the newsroom. “There are colleagues here who say, ‘Hey, we do radio’ and wonder why we should be worrying about how text looks on the page,” says the journalist. “But, okay, we’re multimedial now and we can’t get off a moving train.”

DESPITE the fact that it draws largely on German examples, it’s impossible not to read The Life Informatic through the lens of the current state of Australia’s news industry. In this country, where media ownership is more concentrated than nearly anywhere across the global north, things aren’t looking great for the traditional players. The two biggest newspaper publishers between them are shedding thousands of jobs, with hundreds of editorial staff to go; many commentators are predicting that it is only a matter of years before we see the end of print versions of certain editions of newspapers. TV and radio newsrooms around the country are being similarly streamlined.

Online, the newspapers are starting to give away less of their content as they attempt to transition readers to paywall models, although none have come close to being self-sufficient from this source, despite ever-growing traffic. Otherwise, a handful of online-first outfits are making a go of it: Crikey seems to have established a working subscription system, New Matilda has risen from the dead at least once on the back of crowdfunding, and the Global Mail is burning through a pile of philanthropic cash. Internationally, the London-based Guardian is probably the best-known example of a traditional news organisation that has embraced online with some success (although it’s worth noting that the Guardian’s corporate structure insulates it from normal profit-and-loss pressures).

The challenges faced by legacy news organisations are often described as merely technical – that is, how to adapt to digital – but Boyer quickly demolishes that notion. He speaks of a massive shift from a radial model (hub and spokes) of news production and consumption to a lateral model (multiple, interconnected nodes), which has its genesis in technology but is more complicated than that.

Boyer argues that the broadcast model of news production that has served as a major social institution is falling apart. In response to these shifting structures of news production and reception, journalistic organisations are desperately trying to redesign business models that no longer work. In attempting to adapt, many organisations have shifted from a “public service” role of news delivery, where the audience is served en masse as a body public, to a new model in which consumers are treated as individuals whose individual consumption is aggressively courted. The audience for news has been reimagined as a collection of potential clicks. “Meanwhile,” says Boyer, “the lateral revolution advances and the radial institutions that not only anchored a certain understanding of ‘news’ but also liberal-democratic conceptions of political publicity seem increasingly aged, indeed ‘gerontocratric,’ and incapable of renewal.”

In the process of examining the impact of these transitions on digital information workers, Boyer discovered a number of dichotomies and contradictions in the experiences of journalists. One of the most common is a feeling among journalists that their ability to exercise judgement about newsworthiness is being overridden by other factors such as website metrics or competitors’ actions. On the one hand they want to know what the audience thinks, but on the other they don’t want these outside factors to undermine what they believe is their professional authority.

These pressures have consequences beyond the working conditions of journalists. As a growing number of organisations publish stories based on the same source material, an “illusion of authority through consensus” can emerge, and that’s bad news for consumers.

AS THE familiar constructs of the news industry of the past disintegrate, we need to separate the act of journalism from the broadcast model of production and delivery. If we want to “save” journalism we must move beyond trying to prop up traditional organisational structures – an act Boyer calls “quixotic.” The simple fact is that in a lateral system, digital information is proprietary for minutes and seconds; the authority that traditional news organisations could previously command as sources of information has been dramatically undermined as the value of original news in the media marketplace declines. “The massive potential to circulate and republish news content in the digital era is indeed unsettling to the point of being unthinkable for a great many news professionals,” says Boyer.

Organisations have “become so adept at watching each others’ news output and synchronising coverage of major news events that reporting such events no longer appears the basis for building a distinct identity,” argues Boyer. And as we see more and more homogenisation of content across publications, news organisations will need to focus on strategies such as hyperlocalisation and niche reporting to differentiate themselves from the mass-market content produced by wire agencies and re-reported widely and for free. Some organisations have chosen to chase traffic through a focus on infotainment and other click-bait content, but a focus on quick-hit metrics leads inevitably to shallow news coverage.

In 2013 the primary role of many news organisations is now closer to gatekeeping than to generating news. With so much information already circulating and available for republication, journalists’ jobs increasingly involve selecting and editing content rather than researching and writing new material. As these workers need to produce more content in less time, they continue to try to “redefine their senses of agency, expertise and authority given the new ecology of forces that have transformed and that are continuing to transform their work environments and practices.” •

Scott Bridges teaches broadcast journalism at the University of Canberra.

Sylvia Lawson reviews The Gatekeepers and The Rocket

Tactics without strategy: Avraham Shalom in The Gatekeepers 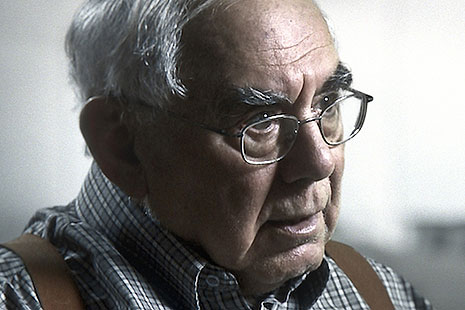 Tactics without strategy: Avraham Shalom in The Gatekeepers