Cautionary tales from the birthplace of bureaucracy

Even in modern Germany, government maladministration can have tragic effects 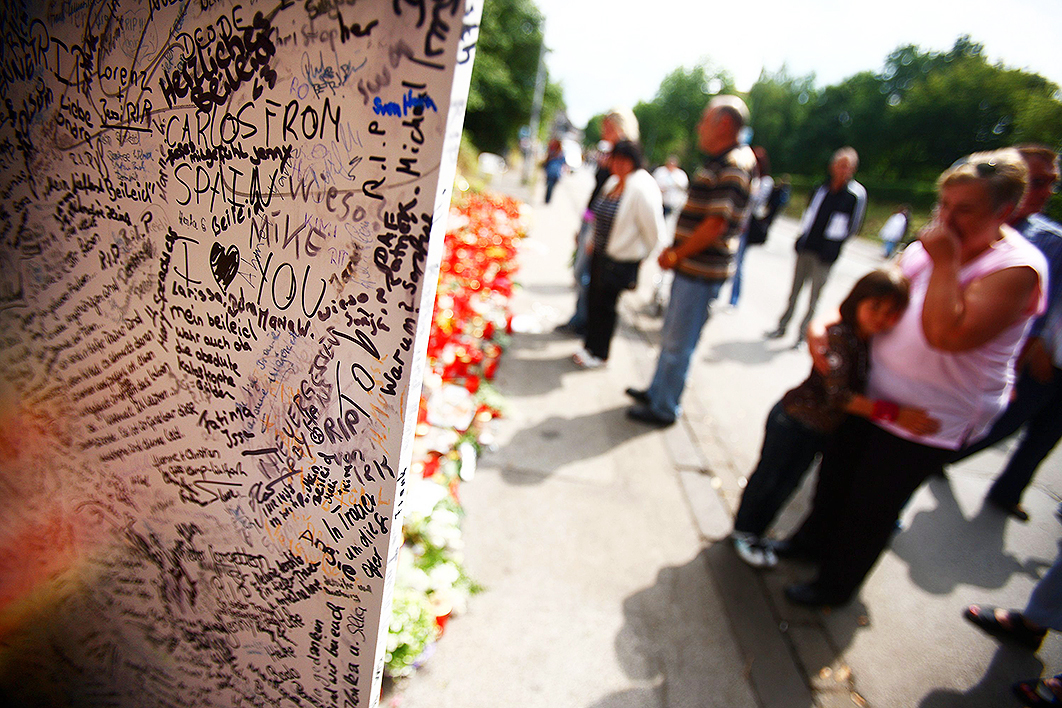 Messages left by mourners near the entrance to the Love Parade grounds in Duisburg, Germany, where twenty-one people died and hundreds were injured during a mass panic at a techno-music festival. Oliver Berg/EPA

There is something oddly — and no doubt inappropriately — gratifying about reading an account of German stuff-ups. Yes, German stuff-ups. Because, let’s face it, other Europeans and Australians see contemporary Germany as a highly successful country that has emerged triumphantly from the travails of post–cold war reunification to become Europe’s economic and political powerhouse. It’s a nation that charts a stabilising course between hot-heads in the White House and in the Kremlin. It had the courage to open its doors to hundreds of thousands of refugees, and then to lead Europe into a pragmatic deal with Turkey to stem what had become a politically explosive tide. And — damn it — it nearly always wins at soccer.

No nation can be that great all of the time. And Germany isn’t. We can see its once relentlessly centrist politics being split open by the centrifugal forces of anti-immigrant sentiment fuelled by a hitherto taboo form of populist identity politics. Its enormous car manufacturers embarrass themselves by fraudulently doctoring environmental impact tests. Its much-vaunted Energiewende (the radical shift from nuclear and fossil-fuelled power generation towards renewables) is proving a lot harder to put into practice than it was to conceive. Even German soccer supremacy has come under challenge from the same Southern European nations whose out-of-control economies it has resolutely curtailed over the past decade.

In a revealing new book, Verwaltungsdesaster (“Administrative Disasters”), long-time observer of German public administration Wolfgang Seibel and his colleagues Kevin Klamann and Hannah Treis have laid bare the fact that, at least from time to time, German governments fail to perform even the most basic function of the state: to protect the lives and limbs of people who reside on its territory. Through four in-depth case studies they provide a sobering account of how lives have been lost because local, state and federal government authorities failed to exercise their responsibilities effectively.

Some of these cases made for global news. One was the crowd disaster at the Love Parade festival in the city of Duisburg in 2010, during which twenty-one people lost their lives and a whopping 652 were badly injured. Another was the case of a murderous trio of young neo-Nazis who managed to go undetected for seven years, during which they killed nine immigrants and a police officer as well as injuring twenty-two in a nail-bomb attack.

The book’s other two case studies are less dramatic, exemplifying the kind of “normal accident” that the media and the public briefly note, shake their heads over in disbelief, and rapidly forget. One involved the collapse of the snow-covered roof of an indoor sports and recreation centre in a small town (claiming the lives of fifteen people, twelve of whom were children). The other involved the death of a three-year-old toddler at the hands of her parents, whose tumultuous relationship and chronic inability to care for their child had occasioned the involvement of a host of agencies right from the point of birth.

Each of the cases is dissected forensically. The authors skilfully reconstruct the course of events in the weeks, months and sometimes years leading up to the eventual incidents and their effects. They meticulously detail the decisions and actions of the relevant political office-holders, public officials and other stakeholders that in combination produced these tragedies, and identify the causal mechanisms at work.

It makes for sobering reading. We might perhaps have assumed that the various governments failed to protect their citizens because their capacity to do so was undermined by cutbacks, downsizing, neoliberal outsourcing and ill-regulated competition for public service provision. This has been a constant refrain in the plethora of post-mortem reports of similar disasters in Britain since the 1980s. From the Kings Cross Station fire and the Clapham Junction train collision all the way to the Grenfell Tower tragedy, the systematic erosion of the British public sector’s regulatory and administrative capacity has been named by a whole series of inquiries as a chief contributor to avoidable losses of life. But that’s not the culprit in the cases investigated by Seibel and his colleagues.

Alternatively, we might expect these tragedies to be unfortunate by-products of governments’ earnest efforts to cope with “wicked problems” in complex, multi-level governance arenas — think climate change adaptation or managing Germany’s massive immigration flows. Or of the difficulties of managing highly complex public infrastructural projects, such as the ill-fated, millions-slurping and politician-devouring effort to build a new state-of-the-art airport for Berlin. But again, none of these challenging issues is at play in these four instances.

What we have here is basic public administration done badly. Ensuring that safety and security standards are met in the organisation of a big government-sponsored pop and cultural festival. Connecting the dots between investigations of what became a whole series of murders of mostly Turkish-born immigrants. Ensuring that adequate maintenance is performed on an ageing public ice rink and swimming pool complex. And case-managing a problematic young couple so that no harm befalls their at-risk child. To be sure, not all of these tasks are outright simple, but they are hardly unique, unpredictable or inherently complex. So why did German authorities stuff up, regardless?

The authors’ answers are withering. They demonstrate convincingly that even in the early twenty-first century public administrators in Germany have not come to grips with the in-built and self-evident risks and pathologies of bureaucracy. The bureaucratic form of organisation was a mid-nineteenth-century invention that helped propel what was then Prussia into modernity and became a pivot for Germany’s famous — and at times notorious — efficacy. Its strengths derived from rule-based recruitment, promotion and decision-making, carefully tiered hierarchies, specialised expertise, functional division of labour, and a strict separation between “political” and “administrative” roles and responsibilities. It made government effective by driving out the feudalism, corruption, favouritism and dilettantism that had plagued it.

Taken too far, though, those beneficial features have their dark sides: adherence to rules for rules’ sake; “stove piping” and silo mentalities; undue deference to hierarchical superiors; turf politics; backdoor politicisation; and, perhaps most importantly, institutional indifference to the ultimate goal of the whole exercise — namely, to work for the safety, prosperity and wellbeing of citizens.

In the four cases, these workaday pathologies of public bureaucracies played a pivotal role. And what they conspired to produce were massive errors of omission: not paying due attention to safety considerations; not exchanging information or coordinating across sectional, departmental and jurisdictional boundaries; not challenging erroneous assumptions creeping into the official view of the world; not calling out bad practices in the making; not caring about the human equation in the decisions that were being made. And, pivotally, not speaking truth to power.

So when the mayor of Duisburg insisted that the Love Parade event be held even though the organisers’ informal estimates of expected attendance crept up as high as a million spectators — a million spectators to be hosted in a space that could at best safely handle about a fifth of that number — none of the municipal and regional civil servants in the various planning committees spoke up. In fact, one section head explicitly referred to the mayor’s publicly stated wishes to put pressure on other sections to stop being bureaucratic and help the (private) organisers get on with things.

These are stories that Australians can relate to. After all, this country was effectively founded and run by bureaucracies before democracy took hold. The Australian form of government, too, has been struggling to responsibly move towards post-bureaucratic forms of organising the public’s business, and to combine the necessary emphasis on procedural rationality with the substantive imperatives of its cherished “fair go.” Speaking truth to power has gradually become a bigger challenge, too, as the era of the powerful mandarins has given way to that of frenzied and imperial ministerial offices. So let’s hope that this book is translated into English soon so it can serve not just as a careful study of German administrative woes but also as a cautionary tale for Australian public administrators. ●

Paul ’t Hart is Professor of Public Administration at Utrecht University and the Netherlands School of Public Administration, as well as a core faculty member of the Australia New Zealand School of Government. He is the co-author of Settling the Office (2016) and The Pivot of Power (2017), a two-part history of the Australian prime ministership published by the Miegunyah Press.