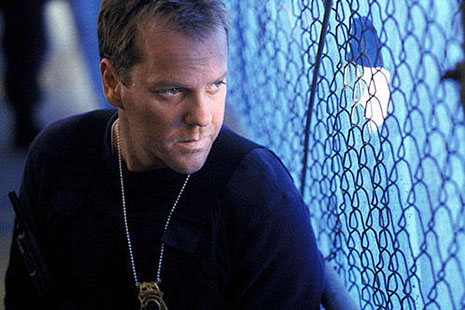 Kiefer Sutherland as Jack Bauer in 24.

IT WAS JUST LIKE on television. The son of a German banker was missing and a kidnapper was demanding a million euros. The police covertly watched the ransom drop-off and discovered that this real-life Dr Evil was a young law student. Magnus Gäfgen had paid (some) attention in his classes and stonewalled at the interrogation. Perhaps the vice-president of Frankfurt’s police was equally attentive to the methods of Agent Jack Bauer on television’s 24. Desperate to find the missing ten-year-old, Wolfgang Daschner authorised another officer to inflict “great pain” on their suspect. The mere mention of that was enough to prompt Herr Gäfgen to take the police straight to the missing child.

Alas, the child was long dead, but later events tracked the plot of the controversial TV show. Officer Daschner was prosecuted for his actions, but got off with only a slap on the wrist. The German public lauded him as a true professional. But 24’s real-time format means that it never has to confront the toughest question of all: what are courts of law in a democracy to do with a villain who was forced by the state to lead them to evidence of his guilt?

The Grand Chamber of the European Court of Human Rights is mulling that over right now in Gäfgen’s case, with judgment due next month. This week the very same issue was resolved by Victoria’s chief justice, applying the state’s new human rights statute. Not everyone will like her answer.

REMEMBER 2004? The gangland war was raging in Melbourne’s streets and its details weren’t yet banned from the city’s televisions. Amid public outrage about the carnage, Victoria Police was forced to extremes. Some cops took to pretending to be criminal gang members to convince some foolish thugs to confess all to their supposed mates. Other police did a bit more than pretend. To beat those canny sorts, yet another set of cops convinced the government to take a lead from the Howard government’s War on Terror.

A year earlier, the Australian parliament had given ASIO new powers to order anyone who may know anything about terrorism to attend a secret interrogation. This wouldn’t be your average police chat. The feds could make you fess up to all your crimes. No dress-ups required. Failure to show up, failure to answer, wrong answers or even telling anyone you were there would land you very serious jail time indeed. No, not torture. But, as ex-prosecutor cum Supreme Court judge Bernard Bongiorno pointed out during Melbourne’s recent terror trials, Barwon Prison’s Acacia Unit for high-risk prisoners comes pretty damn close.

Because Victoria has no official spooks, the government had to invent a new office called (no joke) the Office of the Chief Examiner to question suspected organised criminals. A criminal barrister named Damien Maguire took that job. Similar powers were later given to two other offices occupied by ex-judges: the Director, Police Integrity to investigate corrupt police and the Special Investigations Monitor to investigate corruption of the other two special investigators.

Make no mistake, this is serious stuff. Underworld killers, drug lords, standover men, corrupt police. Victoria has those in spades. Maybe the CE, DPI and SIM can lighten the mood by getting together every now and then to don some silly hats and scream: “Nobody expects the Spanish Inquisition!”

YOU PROBABLY don’t remember that 2004 was also the year when attorney-general Rob Hulls started Victoria on its human rights consultation (just like the one Frank Brennan is currently doing federally.) Fast-forward to the present and Justice Bongiorno has been raising the freshly enacted Charter of Human Rights and Responsibilities all over the place, in petty bail matters and major terrorism trials alike. Late last year he announced that he would stop the chief examiner from questioning people awaiting criminal trials until someone sorted out whether their charter rights against self-incrimination were being respected.

Given that the chief examiner was making suspected crims incriminate themselves on pain of going to prison, you might think that the rights problem would be clear enough. But, so long as they have legislative backing, government agencies have always been able to circumvent this problem by promising not to use what they learn against the people forced to talk. That way, you’re not compelling self-incrimination. Incrimination of third parties is fair game. It’s a clever but fraught solution. For example, it might prompt the crim to identify a serial killer, but what if he identifies himself?

Justice Bongiorno’s problem was that the Victorian parliament (again copying the federal terrorism law) opted for a different bargain in its legislation on organised crime and police corruption. The cops were still barred from using a person’s words against them, but they were free to use anything they learnt from those words.

Here’s how it works: “Carl, tell us where you buried the body. If you don’t tell us, or we can’t find the body, then we’ll lock you up. If you tell us, we can’t use your answer against you.” Two hours later. “Hey Carl, we found the body. Thanks. And the body links you to the crime. We’re going use that against you. What was that? Rights? Are you having a laugh?”

What’s the problem? A lot of people would say there isn’t one. After all, the evidence being dug up – in some cases, quite literally – is pretty good. And it was found without all those man hours, investigative dead ends and pesky search warrants.

But, believe it or not, the purpose of the right against self-incrimination is actually to stop investigators from doing things the easy way. That isn’t because anyone cares less about nailing the crims. Rather, it’s because some people worry about what investigators will turn into if they’re allowed simply to make suspects confess. They’re worried about the investigators’ souls. See Mr Bauer.

NO ONE’S ALLOWED to know the identity of the suspected crim who is awaiting the chief examiner treatment. The entire courtroom was closed to the public at the appeal against Justice Bongiorno’s orders. Even the cop assigned to ask Justice Bongiorno for permission is only known by his or her initials, DS. I’m guessing Daryl Somers. Or maybe Darth Sidious? But at least the name of the judge asked to adjudicate Bongiorno’s challenge is no secret.

Daryl Somers might well have been pleased to draw Chief Justice Marilyn Warren in this case. She had been involved in two earlier judgments on Victoria’s rights charter. As part of an appeal bench, she gave short shrift to the free speech claims of Channel 9 when it wanted to show a TV show about the recently raging gangland war. And she was later dismissive of a cop’s claims to free speech in an action alleging that she had leaked an innocuous speed camera manual to a buddy.

The lawyer representing Darth Sidious was the government’s very own Special Counsel, Human Rights. Did Joanna Davidson know when she applied for that job that her task would be to convince Victoria’s judges to read Victorians’ human rights as narrowly as possible? Fair hearing rights? Not for the mentally ill. Security of the person? A-OK with forced injections. Bail? The charter makes no difference. Last year, the government’s lawyers even convinced a Supreme Court judge to read the presumption of innocence, of all things, down into a tiny dot, based on a vague heading to a section of the charter and cherry-picked sentences from overseas judgments.

But, this time round, Davidson hit a big wall, perhaps because her brief forced her to argue that the charter’s rights were narrower than the common law itself, having been whittled away by countless statutes… like the very ones at issue in this case! Chief Justice Warren’s judgment is a fiery defence of the common law against statutory incursion. She scorned the narrow Hong Kong precedents about insider trading and vague procedural protections relied on by the government. Instead, she agreed with the Human Rights Commission that Victoria’s human rights standards should be no less than those of Canada, the nation that invented the type of human rights law that Victoria chose to adopt. If the Canadians could fight and win against domestic terrorists without sacrificing Canadians’ rights, she reasoned, then Victorian police could do the same against the Underbelly mob.

Most dramatically, she boldly held that Victoria’s charter must never be hedged by technicalities and weak remedies, effectively killing off the government’s entire litigation strategy. Declaring that a bar on using compelled words but not on what is learnt from them is no bar at all, she reinterpreted the coercive questioning statute in a subtle way: the chief examiner could examine whomever he pleased, but only if prosecutors were barred from ever using evidence against those people that could not have obtained without the threat of prison.

PERSONALLY, I’ve never been moved by either side in the debate about human rights protection. All I’ve cared about is that any such statute should be properly applied, as a bad charter is clearly much worse than no charter at all. But I’ve got to say that reading a judgment that actually gets the charter right for a change is a powerful experience. Here, Hulls’s rights statute yielded a nuanced solution to a crucial question – a solution that the common law’s all-or-nothing approach to human rights could never have come up with.

But many will be unhappy. The anti-charter movement will be frothing at the mouth at the thought of judges improving on a duly enacted law (even though Warren relied on exactly the same common law rights that the anti-charter folk say are sufficient protection of individual rights.) Bob Carr will presumably stick his head out of his gold-plated office at the Macquarie Bank once again to tell the elites: “Hands off our democracy. It’s working just fine!”

I fear that the pro-charter lobby will be even less pleased. This first genuine application of the charter has shifted the goalposts significantly in favour of suspected organised criminals, whose ranks include those perennial crowd favourites, paedophile rings. And its main effect, the exclusion of very cogent evidence of guilt from Victorian criminal trials, is the tabloid’s greatest legal bugbear. The chief justice’s decision also has major implications for Frank Brennan’s national human rights consultation, confirming that any federal charter will come at a tangible cost to the nation’s counter-terrorism infrastructure.

Least happy of all will be the Victorian government, which must now choose between enduring weakened coercive questioning laws or forever tarnishing its signal constitutional experiment. Oh, to be a fly on the wall when police minister Bob Cameron and attorney-general (and charter father) Rob Hulls sit down to nut this one out… •

Jeremy Gans is an associate professor at Melbourne Law School and advises the Victorian Parliament’s Scrutiny of Acts and Regulations Committee on human rights.

More than ever before, the real business of forming government in Germany will happen after this month’s election, writes Klaus Neumann

The campaign’s highlight so far: Vera Lengsfeld, the Christian Democratic Union’s candidate for the seat of Kreuzberg-Friedrichshain in Berlin (currently comfortably held by the Greens) uses a famous photo of German chancellor Angela Merkel (left) to attract voters’ attention. The slogan reads: “We have more to offer.” 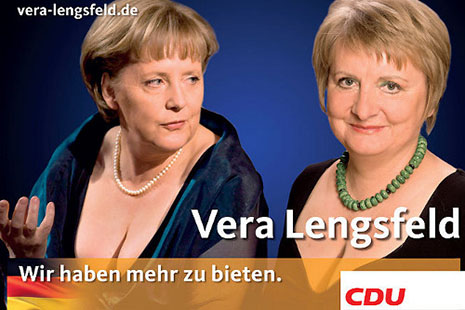 The campaign’s highlight so far: Vera Lengsfeld, the Christian Democratic Union’s candidate for the seat of Kreuzberg-Friedrichshain in Berlin (currently comfortably held by the Greens) uses a famous photo of German chancellor Angela Merkel (left) to attract voters’ attention. The slogan reads: “We have more to offer.”