China in the Pacific: a question of influence 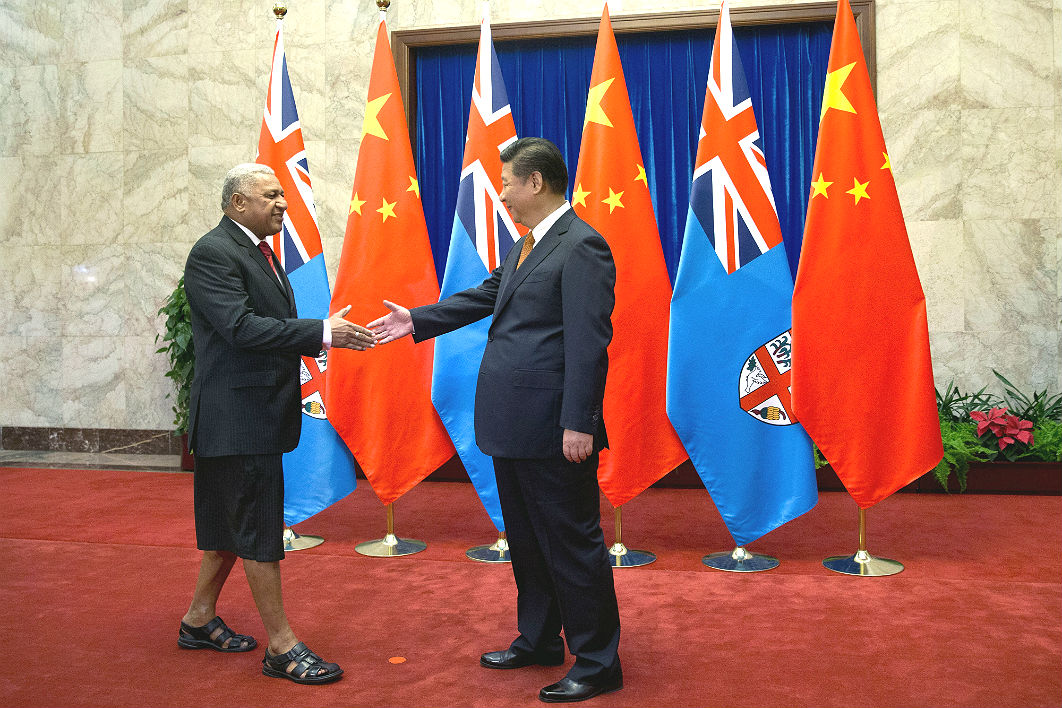 Last week Radio National’s Background Briefing aired the extraordinary allegation that the seventy-seven alleged Chinese criminals deported from Fiji in August were mainly teenage girls brought to the Pacific as sex workers. All the evidence suggests that the arrests were designed to reassure a domestic Chinese audience rather than serve the interests of justice.

In the program’s second report on Fiji, Hagar Cohen maps out how the Fijian government keeps a lid on this and other sensitive stories with the help of an American PR company, Qorvis. The firm’s other clients include the Saudi government, which it promotes as a supporter of counterterrorism and women’s rights. Two former departmental secretaries describe a climate of fear within the Fijian government and media.

But the program’s most damning evidence comes from a Qorvis consultant in Fiji, Graham Davis. In a leaked email to the government-friendly Fiji Sun, Davis lambasts the quality of the paper, which “is only helpful to the government,” he wrote, “if it retains its credibility.” He described himself as “deeply concerned about the feedback I am getting generally around town about the Sun. ‘Zero credibility,’ ‘rag,’ ‘cocksucker,’ is the general drift. Sorry to be brutal, but it’s the truth.”

A key message of this second program is that it’s not the agents of influence we need to be worried about, it’s the targets of influence, some of whom are promoting what might be called illiberal development or illiberal state building.

The point was driven home to me when one of my students accused me of dodging a question from the presenter of Sunday Extra, Hamish Macdonald, during a discussion of Background Briefing’s first report last week: “You said there’s nothing necessarily sinister about Chinese influence in the region. I think it’s fair to say, though, that the perception of Chinese influence is fairly negative. Should we be more concerned about Chinese influence in the way it invests, the way it creates military and diplomatic ties? Should we view it differently to the way America might…?”

Part of the answer to that question is straightforward. Long before the current American administration blundered into office, the United States had removed itself from the South Pacific — despite Hillary Clinton’s best efforts as secretary of state to get the Senate worked up about China’s influence. As one political staffer put it to me a few years back, “Only two things get [Capitol] Hill interested in the Pacific: China and tuna.” (It works best with an American accent.) Australia and New Zealand have been criticised for “losing the Pacific” to China, but with Obama’s “pivot to Asia” abandoned and the America First crowd walking away from the Trans-Pacific Partnership, the United States won’t be returning in a meaningful way anytime soon. Australia’s view should differ from Washington’s, not because the Pacific is ours to lose but because we’re still here in the Pacific.

The fears about Chinese influence in the Pacific rest on a few misconceptions. China does not have an overwhelming diplomatic presence in the Pacific, as claimed in the 2006 report of an Australian Senate committee, which expressed worries about the impact of “lavish banquets” on Pacific leaders (as if free feeds would lead them to sell out their people). On the ground in the Pacific, China’s embassies have a ghostly feel. Commerce ministry representatives, charged with managing China’s investments abroad, are overwhelmed by their workload, although anecdotal evidence suggests that the standard of representation has improved in the latest round of postings. There are also signs that China is looking to upgrade its level of military engagement with the Pacific.

Muscular state interventions, like the show arrests in Fiji, are likely to become more common as the Chinese government — with an eye to the domestic audience — looks to live out the tagline of this year’s state-endorsed box office sensation, Wolf Warrior 2: “Whoever attacks China will be killed no matter how far the target is.” But it is companies, both state-owned and private, that are building deep links with political elites, bureaucracies and (in some cases) civil society in the Pacific. Despite the Belt and Road Initiative, which aims to link Chinese infrastructure investment to national goals, Chinese companies in the region are still playing their own game.

Chinese capital and development finance appear to be driven primarily by market opportunities and the presence of Chinese companies on the ground in the destination country. Unlike Chinese state agents, company managers and engineers aren’t on three-year postings, looking to impress bosses in Beijing. They have skin in the game, and will be the enduring source of Chinese “influence” in the Pacific.

Unlike at any time over the previous three decades, Jamil Anderlini observed in the Financial Times last week, Chinese officials are no longer talking about democracy as the ultimate goal of China’s reforms. This avowedly illiberal regime, emboldened by the anti-democratic and isolationist stance of the Trump administration, has become more assertive abroad. The unapologetic brutality of the show arrests in Fiji demonstrates this. But I don’t think it follows that Chinese players in the Pacific are looking to export an illiberal model of development, at least intentionally. Chinese companies want to do business, and with as little fuss as possible. (Not that they always behave well: efforts by Beijing to get them to be more socially responsible abroad have been extensive but ineffective.)

In fact, as much as Australian politicians and officials like to lecture the Pacific about governance, the controversies over Chinese influence in Australia and New Zealand have arisen from flaws in our own systems of governance. In Australia, the culprit is a venal system of party financing and the long-term under-funding of universities; in New Zealand, it’s the lax procedures for vetting candidates for both major parties.

Some Pacific institutions, including universities and church groups, have pushed back against Chinese companies, often leading to improvements in corporate practices. And some Chinese companies have dealt with local concerns, hiring more local labour, using more local materials and being willing to work in regions (such as the PNG Highlands) where other firms, even local ones, fear to tread. Compared to other companies — Malaysian logging outfits in PNG, for example — China’s firms are still innocents, just as often finding themselves the victims of Pacific political shenanigans as the beneficiaries of corruption.

The outlook for China’s role in the Pacific is less sanguine than it was five years ago, not just because of China’s greater economic clout but also, crucially, because of the willingness of some Pacific leaders to promote illiberal development. Hagar Cohen’s investigation featured a local Chinese-Fijian businessman celebrating the Chinese removal of the alleged criminals because it saved Fiji from the “rigmarole” of the legal process — the same legal system he presumably hopes will safeguard his own rights. This week’s Background Briefing provides an insight into how far the Fijian state is willing to go to save itself and a foreign power from the rigmarole of media scrutiny, but in doing so Fiji has opened itself up to a whole new set of geopolitical risks. China might be the least of its worries. ●

Graeme Smith is a Research Fellow in the Department of Pacific Affairs at the Australian National University and the host of the Little Red Podcast.