A historian rescues a former leader from the party’s airbrushers 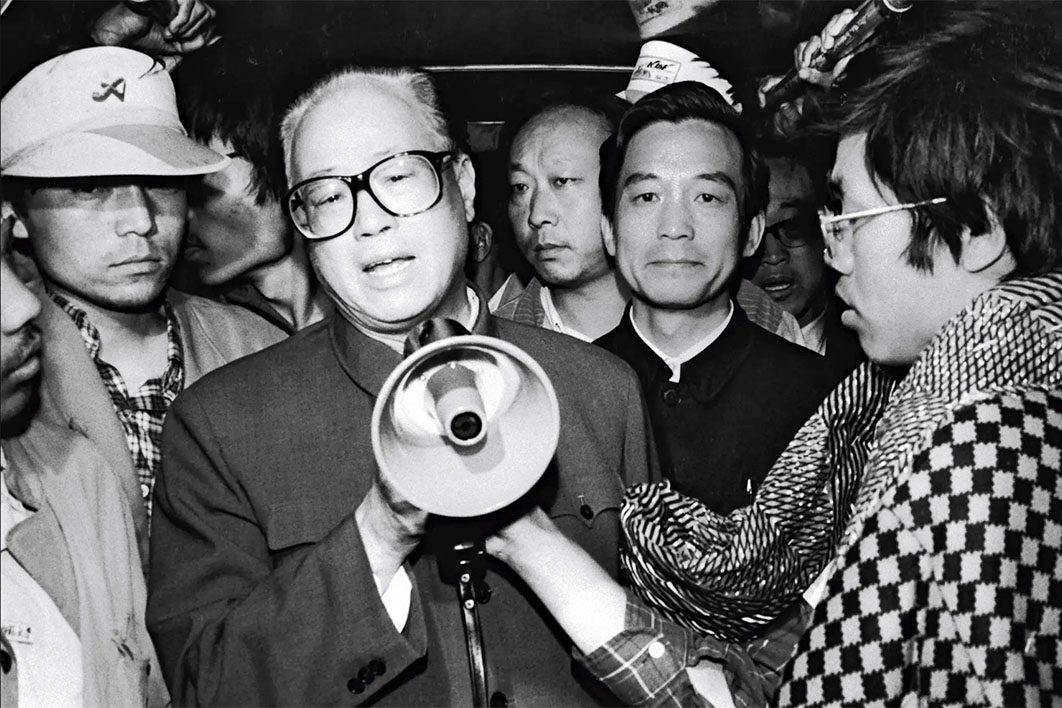 In Milan Kundera’s novel The Book of Laughter and Forgetting, a Czech communist hero and Politburo member, Vladimír Clementis, appears in a famous photograph of the top brass reviewing a military parade on a winter’s day in 1948. It was a cold day, and Clementis had lent the party leader his fur hat.

Not long after the photo is taken, Clementis commits a grave ideological error. He is arrested as a traitor and hanged. Party hacks meticulously erase every mention of him from the historical record and airbrush him from every photo. And yet his hat, now part of the party leader’s image, remains in that famous photo. Like the sight of the bare wall where Clementis once stood, the hat is an obscure but indelible reminder of the person who has been struck out.

Historian Julian Gewirtz examines another blank space in his new book, Never Turn Back: China and the Forbidden History of the 1980s. This is the stretch of wall where former premier and party general secretary Zhao Ziyang once stood. Gewirtz restores to Zhao’s head the hat of the “architect of reform and openness” that has sat on Deng Xiaoping’s head in the decades since. The result is a landmark work of historical scholarship with profound significance for understanding China today.

When Mao Zedong died in 1976, the Chinese economy was in tatters. Mao’s “continuous revolution” and factional infighting had broken China’s politics, and more than two decades of violently waged ideological campaigns — which had culminated in the 1966–76 Cultural Revolution — had left society scarred, cultural heritage decimated, and educational institutions and intellectual life eviscerated.

The new leadership that coalesced under Deng Xiaoping in 1978 needed to tackle political, economic and social dysfunction. The key, they agreed, lay in modernising agriculture, industry, defence, and science and technology: the “four modernisations.” The central, burning question of the decade was how exactly China would achieve those modernisations.

Deng was prepared to tolerate a certain amount of systemic change to make government more efficient and less top-heavy, to encourage local initiative, to promote professionalism, and to create the legal and other structures under which the economy could grow. He also recognised the need to prevent the emergence of another leader like Mao who would concentrate power in his own hands and rule for life.

He left the details to others. Those others included Hu Yaobang, who helmed the party from 1981 to 1987, and Zhao Ziyang, who was premier from 1980 to 1987 and then, following Hu’s purge from the leadership, party general secretary from 1987 to 1989, when he himself was purged.

In Never Turn Back, Gewirtz focuses on the contribution of Zhao and the advisers he gathered around him. He notes that the assiduity with which the party has sought to erase Zhao from the record only underlines his importance. (Hu Yaobang leaves a similar patch of blank wall, but it’ll require another book to fully restore him to view.)

Fixing the economy was among the party’s most urgent priorities. Extreme poverty was widespread, especially in the countryside, and industry was almost uniformly heavy, with consumer goods from clothing to radios in scandalously short supply. Zhao was a chief proponent of the “coastal development theory,” which promoted light industry in coastal regions, close to ports, with access to cheap labour. The last would be of advantage in encouraging foreign investment, with an emphasis on investment involving technology transfer.

The United States was among the many advanced countries eager to exploit the economic opportunities that came with China’s economic reform and opening up. Export-oriented coastal development helped not only to build China’s foreign reserves but also to drive the country’s transformative economic growth during the 1980s and beyond.

Another driver was the decision to invest heavily in science and technology, in particular information technology and biotech: a plan inspired by Zhao’s reading of Alvin Toffler’s Third Wave that chimed with Deng’s interest in modernisation.

But Zhao and his circle were also interested in systemic change. They saw political and economic reform as two sides of the same coin. Among the ideas they discussed, Gewirtz writes, were methods for “separating the party and the government, building up more independent institutions of the media, the judiciary, and the legislature, and increasing transparency, accountability, and even freedom of speech and debate.”

They even discussed how to adapt the notion of checks and balances to Communist Party rule. Thinkers in Zhao’s circle, including Bao Tong, who described democracy as “a kind of mechanism that can correct its own mistakes,” sought a balance between democracy and the “dictatorship” baked into the definition of governance in the People’s Republic.

Gewirtz cautions against concluding that Zhao or Hu were “inborn liberal democrats.” He stresses that Zhao explicitly and frequently endorsed “methods of dictatorship” and in no way advocated for a democratic free-for-all or an end to party rule. There were obvious tensions and contradictions in the two men’s thinking, and it also brought them into conflict with others in the party.

The 1980s were marked by incredibly vibrant cultural ferment, and ideological and intellectual contestation extending far beyond the relatively closed circles of the policymakers. From artists and poets asserting their right to creative expression to students inhaling Sartre, Nietzsche and rock’n’roll, there was a sense of infinite possibility.

That didn’t mean that anything was possible: when a young electrician called Wei Jingsheng had the temerity to suggest in 1979 that without the “fifth modernisation” of democracy there was no guarantee that Deng himself wouldn’t become a tyrant like Mao, he was slapped in prison with a fifteen-year sentence.

The danger for Zhao and those around him was that conservatives, already hyperventilating over “the sight of people drinking Coca-Cola in the streets of Shanghai,” would associate the reformists with genuine radicals like Wei Jingsheng.

When Wang Ruoshui, deputy editor-in-chief of the party mouthpiece People’s Daily, asked why such tragedies as the Cultural Revolution “happen repeatedly in socialist societies” and suggested that the Communist Party embrace the previously taboo notion of “Marxist humanism,” the hardcore ideologues lost their minds.

The subsequent 1983 campaign against “spiritual pollution,” initially endorsed by Deng, gave expression to the conservatives’ fears that the changes set in train by modernisation and economic reform could bring down the party itself. Like “bourgeois liberalisation,” “spiritual pollution” was a catch-all term that could signify anything from street crime to obscurest poetry, high-heeled shoes, “erroneous trends of thought” and the generally “foul smell” of new ideas from the West.

Deng put the brakes on the campaign when it appeared to threaten modernisation itself. The 1980s were riven by many such ideological tugs-of-war, and Gewirtz argues that they should be taken seriously.

Today, the Communist Party promotes the line that economic development thrives best under authoritarianism. It touts the “China model” of autocratic rule, social stability and economic growth as a logical and historical inevitability. Any other choice by the post-Mao leadership, the line goes, would have led to collapse and chaos — the crumbling of the European socialist bloc and Soviet Union from 1989 being instructive and, for party leaders, frightening examples. To think otherwise is to be guilty of “bourgeois liberalism” or labelled an agent of global capitalism’s “peaceful evolution” plot to dupe the Chinese people into spurning communism.

Yet Gewirtz’s “forbidden history” shows that the party leadership once seriously contemplated comprehensive structural, political reform. He contends that many of the persistent contradictions within and obstacles to China’s economic development in the decades since — including the persistence of corruption — are directly linked to a refusal to contemplate more systemic reforms. The 1980s was a genuine sliding-doors moment; there were other conceivable futures, albeit still under party rule.

Zhao was purged from the leadership in 1989 and spent the rest of his life under house arrest. The immediate trigger for his downfall was his visit to protesters in Tiananmen Square, where he spoke sympathetically and emotionally to hunger strikers. But this was just the final straw as far as his enemies within the party were concerned.

After crushing the student-led movement on 3–4 June that year, the party decoupled economic reform from political reform. Zhao disappeared from the record and Deng got to wear the former general secretary’s hat as the “architect of the reforms and openness.”

There is much rich detail in Never Turn Back, for which Gewirtz delved deep into archives, papers, official accounts, diaries and memoirs, some of which have only recently become available. The result is a provocative counter-narrative to the Communist Party’s account of that era and the reforms that turned China into the economic great power it is today.

“What would happen,” Gewirtz asks, “if the Chinese people were allowed to know this history? Would it produce the terrible chaos so feared by the Communist Party?” In his conclusion, he sounds a note of hope: “Just as greater openness can be found in China’s past, it might well be found again in China’s future.” •