Attitudes are changing within the young urban population 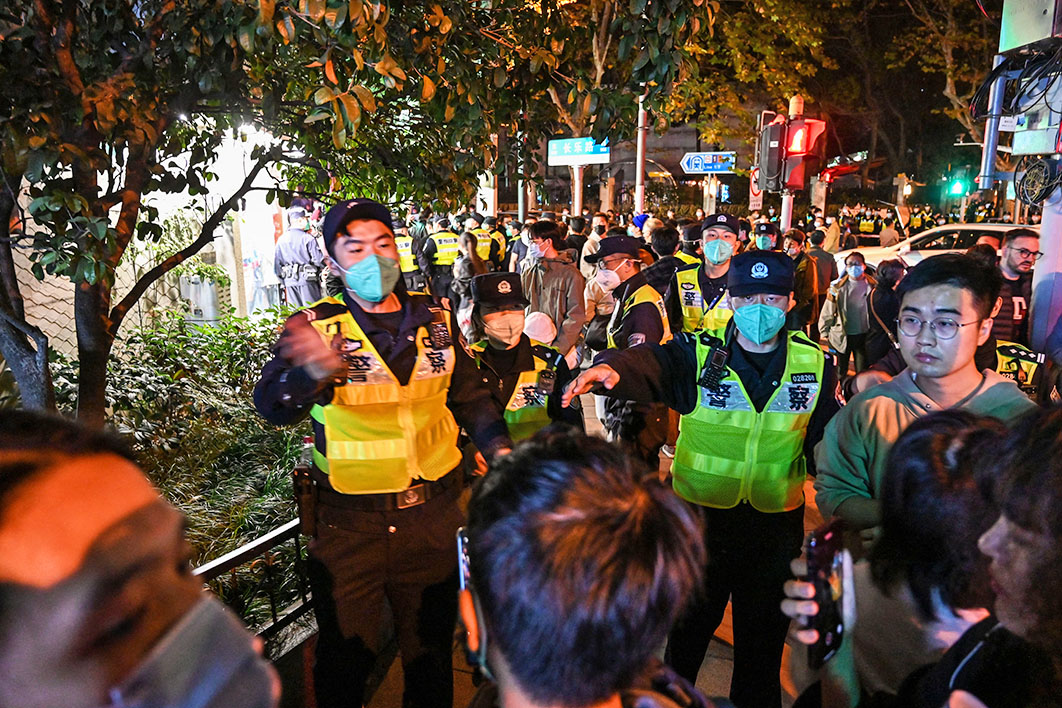 Police clearing protesters in Shanghai on 27 November following the fire in Urumqi, capital of the Xinjiang region. Hector Retanal/AFP via Getty Images

When protesters took to the streets of large Chinese cities in recent weeks to oppose the government’s heavy-handed zero-Covid policy, many observers were surprised by how many of them were young millennials. Chinese people born in the 1990s are often seen as hyper-nationalistic “little pinks” quick to defend the Communist Party, yet here they were taking the risky step of protesting publicly.

Many young, middle-class Chinese people do feel pride in their country’s achievements. Their nationalist views, fuelled by optimism about the future, have been reinforced for decades by government propaganda — at school, in the workplace and elsewhere — telling them their lives have improved, and will continue to improve, under party rule.

This is the implicit social contract between the Communist Party and the Chinese people. In exchange for submitting to its rule, people expect the party to ensure the economy grows and living standards rise. And for the current generation of young, urban, middle-class people, living standards have indeed improved — in some cases almost matching standards in high-income countries.

Along with economic growth, China has become more powerful and assertive internationally. The shift in China’s international standing has been a source of pride for many young people, some of whom have been quick to defend their government when they feel it is under attack. The little pinks are the most extreme of them, using social media to respond viciously to perceived slights.

But this growing pride in China hasn’t diminished the willingness of many young people to critique the party. Even before the pandemic and the lockdowns, they often expressed exasperation at the party’s attitude towards gender equality, the environment and other social issues. Just like their counterparts in other countries, young Chinese people tend to hold more progressive values than their national leaders.

Despite this undercurrent, nationalistic and party-supporting voices have tended to dominate online, at least until recently. This is partly because they are promoted by the party, and partly because everyone is aware of the limitations on what they can say in China’s heavily controlled online environment. Some try to get around the censorship, but the penalties can be severe.

Despite the censorship, social media platforms have commercial incentives to highlight conflict and controversy. In China, this means the most extreme views are more likely to be highlighted, as long as they stay within the scope of what is deemed acceptable.

China’s zero-Covid strategy has changed the equation. It has tempered nationalist sentiment among young people as well as significantly changing their view of the party. Expressions of support for the government and the party are no longer as numerous as they were.

Nationalism surged early in the pandemic when death tolls were skyrocketing in the United States and elsewhere while China managed to keep infections under control. But that changed this year. Other countries were gradually opening up and lives returning to normal, yet the situation in China was worsening. Many people had direct experience of the suffering associated with harsh lockdowns, being denied essential medical care, for instance, or suffering severe food shortages.

Despite the censorship, the party doesn’t have absolute control over information. Young people can be more familiar with what is happening in countries like Australia than Australians are with the reality of people’s lives in China — and that means they can easily compare their lives to those of their counterparts in the West.

Even without the examples of other countries, though, young people can imagine an alternative China — one that doesn’t involve the violence and mistreatment that have characterised the lockdown and quarantine policy, one where people don’t go hungry because they can’t shop, and one where children don’t die after being turned away from the hospital. Chinese people all have their own stories of coercive measures imposed in the name of zero-Covid. While the party was focused on the potential death toll of opening up, it was ignoring the suffering caused by lockdowns.

Not surprisingly, the zero-Covid policy has also affected China’s economic growth, a source of the party’s legitimacy. Youth unemployment surged to a record 20 per cent this year, with many young people struggling to find work and others becoming disillusioned with work itself. China’s weak social safety net means that unemployed people may struggle to afford necessities.

The social and economic impact of the zero-Covid strategy has created a new mood of pessimism among young people, exemplified by the slogan “We’re the last generation,” which spread across social media until the censors intervened. The number of young people who are thinking of migrating overseas has increased, but more can’t afford to or are unwilling to leave the country.

Amid this simmering resentment, the deadly fire in a locked-down apartment building in Urumqi became the spark that lit the fuse of protest. What these protests show is that increased nationalism among China’s young people doesn’t guarantee support for the party. Rather, when the economy slows and the quality of life deteriorates, support for the government also declines.

This worries the party. After the Tiananmen Square protest in June 1989, it strove to build up nationalism as another source of legitimacy. With economic growth expected to slow even further this decade, it will increasingly rely on nationalist sentiment, but the protest shows that nationalism might not be as reliable a source of support as has been assumed.

Nationalism can also be fickle and hard to control. Prior to US House speaker Nancy Pelosi’s visit to Taiwan earlier this year, for example, the party amplified nationalistic voices, some of which were calling for China to take military action and even shoot down Pelosi’s plane. After she landed, though, some of those same voices turned on the party, accusing it of impotence. The party rushed to censor their comments.

Indeed, throughout China’s history anti-government protests have often emerged from nationalist fervour. Many of the young people protesting last week saw it as their patriotic duty. Nationalism can be a dangerous tool for any government, and it is evident that young Chinese people’s pride in their nation won’t always diminish their willingness to critique the party, or guarantee their support for its policies.

Despite the party’s attempts at indoctrination and patriotic education, a diversity of opinion exists among China’s young people. The party can no longer take their loyalty for granted. •