Books | Australian women have been reporting from war zones since the beginning of the twentieth century, and sometimes that’s meant stepping over the line 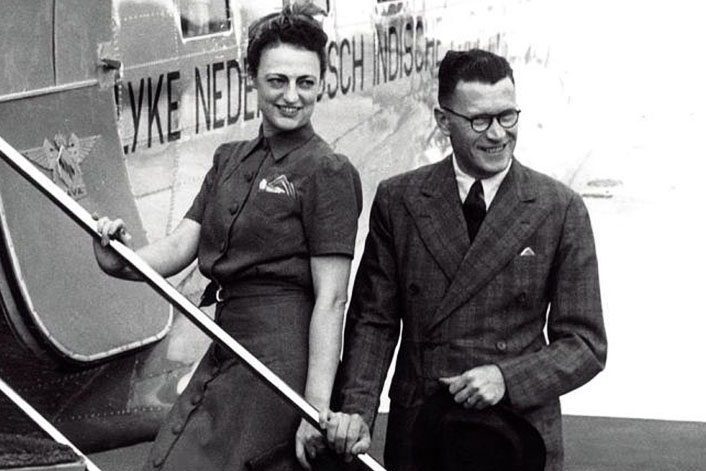 In May 1941, Australian Consolidated Press threw a party in Sydney to celebrate the safe return of reporter Tilly Shelton-Smith and photographer Bill Brindle from assignment in Malaya. Though Shelton-Smith didn’t travel as an accredited war reporter – the government wouldn’t give women that privilege until late 1942 – she was the first Australian woman journalist to report from an overseas military theatre with official sanction.

The high spirits at the party belied tensions below the surface. Shelton-Smith’s trip had been conceived by the government, Jeannine Baker tells us, as a public relations exercise “to promote the good health, happiness and popularity of the Australian troops in Malaya.” Officials hoped that reports in the Australian Women’s Weekly of the sterling job the men of the 8th Division were doing would ease anxious minds and boost morale on the home front. As a woman, Shelton-Smith was banned from reporting on military operations. Instead, she would show her readers “the women’s angle” – a phrase that appears often in Baker’s extensively researched, clearly written and fascinating new book, Australian Women War Reporters.

Shelton-Smith’s reports of “the human, every-day side of AIF camp life” had a breathlessly cheerful tone. The soldiers’ quarters “were more comfortable than at home.” The men were receiving “marvellous hospitality.” Mail arrived regularly, food was cheap, the drinking water tasted good and the rainwater was “so soft that they will come home with better complexions than their girlfriends.” The boys were even finding time to relax with the local dancing girls. A photo taken by Brindle revealed a soldier in close embrace with a Chinese taxi dancer. Another showed a dancer wearing a soldier’s slouch hat.

Readers of the Women’s Weekly were furious – either because of the suggestion that their husbands were cheating on them with “dusky” foreigners, or because Shelton-Smith had impugned the soldiers’ reputations by implying such a thing. And the men themselves were up in arms at being portrayed as layabout tourists. The malevolence of their reactions makes for disturbing reading: “If ever the lads here get their hands on that damn fool woman they will tear her limb from limb,” an officer wrote to his wife. Another predicted that if the men “could get at the woman who wrote the articles, there wouldn’t be much left of her.”

One soldier even appeared to threaten rape, calling Shelton-Smith a “dumb old virgin spreading discontent and dissatisfaction by writing home to the local gossip sheets about how comfortable we are, how little work we do, how we live like lords… [B]elieve me, if the troops could get hold of her she would be a changed woman.” The humiliation and vilification were not restricted to the written word. A cartoon in a battalion newspaper showed a scantily clad Shelton-Smith, in high heels, being chased and then strangled by an Australian soldier.

Shelton-Smith’s experience is an ugly illustration of a theme that runs through Australian Women War Reporters: the prejudice against which women journalists struggled constantly in order to ply their trade. Baker argues that Shelton-Smith incurred such wrath because she had inadvertently transgressed the code of Australian manhood. Her rose-coloured reports of camp life in Malaya “feminised and emasculated the soldiers, and contradicted the military’s image of them as exemplars of the Anzac legend.” A bitter irony of the episode was that the men of the 8th Division would be taken prisoner when Singapore fell in February 1942; those who survived the brutal treatment of the Japanese were cold-shouldered when they returned to Australia by a Returned Services League that judged prisoners of war less valiant (or manly) than other veterans.

Baker’s historical detective work has uncovered the experiences of some of the earliest Australian women war reporters. Like those of the early women doctors who travelled independently to work in war zones, the records of pioneer women war reporters are patchy and obscure, often because they lacked official status. Among them were Agnes Macready, a nurse and journalist from New South Wales who paid her own way to South Africa to report on the Boer war for the Catholic Press. Like the newspaper for which she wrote, Macready was critical of the conduct of both British and Australian soldiers. As her book was nearing completion, Baker unearthed the story of another Australian, Edith Dickenson, who reported on that same war for Adelaide’s Advertiser and Chronicle newspapers. Dickenson’s frank descriptions of the scandalous conditions inside Boer concentration camps influenced the English humanitarian Emily Hobhouse, who brought the matter to public attention in Britain.

Baker shows that women were not above using sensationalist and unscrupulous methods where there was a reputation or a pound to be made. The Adelaide-born poet and romance writer Louise Mack claimed to have remained in Antwerp after German troops arrived in October 1914, though others were certain she had been evacuated. On the back of a hurriedly produced book of anti-German propaganda, she undertook a lecture tour of Australia and the Pacific in 1915 with “the atmosphere of the battle-ground fresh in her memory.” Mack’s stories became more fanciful as her fame grew. Not only did she begin to dress as a nurse and tell audiences she had worked in the Voluntary Aid Detachment in Belgium, she also claimed a friendship with the most admired woman of the time, the martyred British nurse Edith Cavell. According to Baker, the women never met.

Though Australian women journalists achieved the right to equal pay in 1917, most were confined to jobs that were perceived to be of lesser importance (often on the women’s pages) and were consequently less well remunerated. The mass mobilisation of Australian men during the second world war gave women the chance to break out of the women’s pages, though scepticism abounded about their capacity to fill the shoes of their male colleagues. The Australian government denied women official accreditation as war reporters and banned them from reporting in operational areas. Apart from the general belief that war zones were no place for “sob sisters,” there were practical considerations. Women would require separate accommodation and bathroom facilities. They would distract men from the task at hand and inhibit the bonding so vital to propelling them into battle.

There was some relaxation of these strict prohibitions on women reporters in the latter years of the war. Women including Dorothy Cranstone, Lorraine Stumm, Iris Dexter, Alice Jackson and Dorothy Drain blazed a trail both during and after the war. Stumm was the first Australian woman to witness the aftermath of the Hiroshima and Nagasaki bombings, when she was among a group of journalists flown over the cities. Baker speculates that Stumm’s “world scoop,” an interview with the first known European survivor of Hiroshima, was incorporated without attribution into the by-lined report of the Daily Telegraph’s leading (male) reporter, Massey Stanley. Drain wrote from occupied Japan about the difficulties faced by the British Commonwealth Occupation Force. She also joked about the challenges of her job; although women correspondents were supposed to “leap in and out of planes in a cloud of fox furs and Chanel No. 5,” the reality was far more prosaic.

Despite the pioneering work of women like Stumm and Drain, Baker identifies the Vietnam war as the conflict during which women emphatically broke free of the constraints of sex discrimination. New Zealand–born Kate Webb bought a one-way ticket to Saigon in search of freelance work and ended up covering the war for eight years. “Gender is overrated as a distinction,” she told an interviewer. What matters is “how well you do” the job. Yet Webb’s own experience defies her claim. When she was offered a lucrative book contract after being held prisoner for three weeks by North Vietnamese soldiers, the publisher asked her to invent a “love angle” and suggested that perhaps she could fall in love with one of her captors. Webb rejected the offer.

Jeannine Baker demonstrates repeatedly the obstacles encountered by female war reporters and the courage and spirit of those who refused to be deterred. While women journalists have fought for the same opportunities as men, it is also true that the goalposts have shifted in the last few decades towards the kind of journalism that was traditionally done by women. Indeed, one of the most fascinating trends revealed in the book is the increased emphasis on reporting the “human face” of war. Baker describes the stirrings of this phenomenon in the discovery of the extent of Nazi atrocities at the end of the European war, when human suffering trumped the battlefield as the biggest story. As Baker writes, women “were once derided for being too emotional to be effective war reporters, but today many foreign correspondents see an emotional response to war as essential to good storytelling.”

The contemporary predilection for emotive reporting raises the question that hangs over Australian Women War Reporters. After all the protestations against gender stereotyping, is there such a thing as gender difference in war reporting? Veteran ABC and SBS foreign correspondent Ginny Stein seems to be saying that there is when she implies towards the end of the book that women make better war reporters than men. Stein believes that women are “particularly effective” at revealing conflict “through the eyes of the people who are experiencing it.”

Critics might argue that Stein is resorting to the typecasting that women struggled for so long to escape. But I think the comment is a welcome sign of greater nuance and sophistication in the debate about gender difference. Of course, Stein speaks from a position of equality with her male colleagues. And the reason that she enjoys that equality is because of the trail blazed by the women in Baker’s book. •

Carolyn Holbrook is a Postdoctoral Research Fellow in the School of Social Sciences at Monash University.