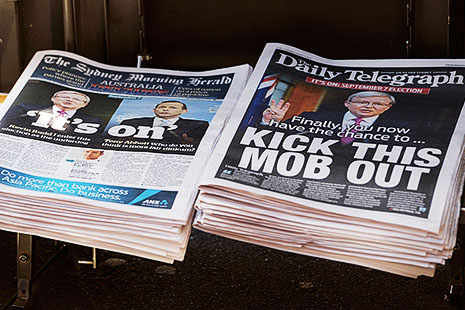 Bad news for whom? The 5 August edition of the Daily Telegraph, alongside Fairfax Media’s Sydney Morning Herald. Greg Wood/ AFP

WHEN Col Allan became editor of Rupert Murdoch’s New York Post in 2001, the paper was losing perhaps $20 million a year. Now, some estimates put the annual loss at $100 million. Allan might well have notched up greater losses than any other newspaper editor in history.

Yet when the former editor of the Daily Telegraph returned to Australia recently he was greeted with great fanfare. Even rival Fairfax papers described him as Murdoch’s “gifted tabloid editor and trusted lieutenant” and one of Murdoch’s “brilliant, intuitive editors.” According to News Corp’s announcement, he was in Australia to provide “extra editorial leadership” – and if the Australian’s Media section is to be believed, he has already succeeded. At the end of July, it reported, Allan gave an “empowering” speech to fellow News editors that apparently left editors feeling overwhelmingly positive about the job at hand. Curiously, none of these reports mentioned the scale of the losses he had incurred in New York.

Allan’s arrival in Australia was seen as bad news for two people – Kevin Rudd and Kim Williams. According to some reports, Allan was here to lead Murdoch’s assault on the Labor government, and his hand may well have been evident in the Daily Telegraph’s unusual decision to begin its campaign coverage with a front-page editorial proclaiming “Kick this mob out.” The paper followed that up with a front page based around the TV sitcom Hogan’s Heroes, set in a prisoner-of-war camp during the second world war. Rudd was photoshopped as Colonel Klink and Anthony Albanese as his second-in-command, Sergeant Schultz; rather clumsily, disgraced former Labor MP Craig Thomson appeared as Hogan, the lovable hero of the series. The headline featured Sergeant Schultz’s signature line, “I know nothing.”

It’s not as if the Daily Telegraph needs any help from Col Allan in honing its strident anti-Labor message or producing outrageous front pages. For a long time the paper’s editors have behaved like a group of ageing attention-seekers who have just discovered Photoshop. Peter Slipper was depicted as a rat on one front page, Stephen Conroy as Stalin on another. What’s revealing about the Hogan’s Heroes front page is that the last episode of the show was made forty-two years ago, and the image would communicate little to anyone aged under forty-five. That puts the Tele’s editors very much on the wavelength of Generation Last. Their election campaign so far has been an absolute Barry Crocker.

Several commentators have argued that the support of the Daily Telegraph is crucial for Labor because of its circulation in western Sydney. I would think, however, that after three years of the paper’s anti-Labor barrage, any Telegraph reader who was going to defect from Labor would have already done so. Many others – those who read it for its rugby league coverage, for example – are immune to its political slant or take it with a large grain of salt. When Essential Research asked readers how much trust they had in their daily paper in January this year, the Age and the Sydney Morning Herald topped the rankings of the six papers surveyed (with 71 per cent of readers trusting them, and 25 and 29 per cent, respectively, not trusting them). The Telegraph was at the bottom: only 48 per cent of readers trusted it and 50 per cent did not – and this is credibility among its own readers, not the public as a whole.

It is unlikely that Rudd and Allan will be going out for a friendly drink together, as they once did in New York. Several reports about Allan’s arrival recalled that Rudd first met the editor in 2003 when he was visiting the United Nations as opposition spokesman on foreign affairs. He and Allan went out to dinner, and then on to Allan’s favourite strip club, Scores, where – Rudd later confessed – he had too much to drink. Four years later, when Rudd was opposition leader, the Murdoch Sunday papers in Australia all ran a front page story, “Rudd’s drunken night in strip club – EXCLUSIVE,” by Glenn Milne, with the lead, “Kevin Rudd’s hopes of becoming prime minister have been rocked by a visit to a New York strip club where he was warned against inappropriate behaviour during a drunken night while representing Australia at the United Nations.”

There were two curious aspects to the story. The first is the obvious – that it seems unusual for one Murdoch editor to ply someone with alcohol and take him to a strip club and then for another Murdoch editor across the world to put this on a front page, acknowledging the presence of the first Murdoch editor but downplaying his central role. A couple of days later, in a statement receiving much less prominence, Allan said Rudd behaved like a “perfect gentleman” at the club. And it’s strange that the Australian tabloids didn’t seek their colleague’s comment before initial publication. If they had it would have punctured the innuendo with which Milne spiced his article, and refuted the unsupported claim in the first sentence that Rudd had been “warned” for his behaviour.

IN FACT, it may be that Murdoch’s shareholders have more to fear from Allan’s arrival in Australia than the Labor Party. Reports that his arrival was ominous for NewsCorp’s Australian CEO Kim Williams quickly proved accurate. Allan told the News editors to trust their instincts not “the data,” a direct repudiation of Williams’s use of management consultants and data – including balance sheets – to drive planning. His cost-cutting and restructuring, based on the mandate he had been given by Murdoch, had caused conflict with the editors. Williams resigned on 9 August, just twenty months after he had begun what was hailed as a transformation of News Corp’s Australian operations. His replacement, Julian Clarke, was lured back from retirement; among the many words of praise for him in News Corp papers, the words dynamic, visionary or strategic didn’t appear.

This sequence of events points to a deeper issue. Following the scandals in his British papers, Murdoch was forced to split his company. There was already a widespread feeling among investors that the newspaper tail was wagging the media dog, and that profits would be much higher without the drag of print. The scandal finally made it impossible for Murdoch to resist. So the company was split into what is now called 21st Century Fox – with the film, TV, satellite broadcasting and cable channels – and a smaller News Corp, which includes all the newspapers.

The ousting of Williams draws attention yet again to the illogicality of the original News Corp split and of Murdoch’s intentions for the smaller entity. The Australian pay-TV operation, Foxtel, was thrown into the newspaper company on the specious grounds that Australia was so far away. This may have been a valid argument in 1963 but in the globalised world of 2013 it made no sense to put Foxtel in a different company from Murdoch’s BSkyB in Britain, his Star satellite services in Asia and his American cable channels, which distribute globally.

Business politics rather than business logic seems to be the key. Foxtel makes up more than a third of the new News Corp, and perhaps it is there in faraway Australia to prop up the loss-making parts of the company. In this smaller company, Murdoch still feels free to indulge himself – to keep the New York Post operating despite its huge losses, for example, because of the political clout and ego satisfaction it gives him. While Australian attention has been concentrated on the local implications of Allan’s return, its greater significance in Murdoch corporate politics may be that it removes the champion loss-maker from New York. One can imagine Robert Thomson and the accountants, fervently telling him, “Col, mate, Australia really needs you…” The Financial Review even quoted “a senior News Corp source” who said, apparently with a straight face, “I can see Col becoming Rupert’s international ‘newspaper doctor.’” Potential investors may conclude that it is not only in its political coverage that News Corp shows a tenuous relationship with reality. •

is author of News and Power (Allen and Unwin) and Scandals: Media, Politics and Corruption in Contemporary Australia (UNSW Press).

Neither everything nor nothing

Does misogyny in politics reflect a deeper problem in the character of political debate, asks Jane Goodall 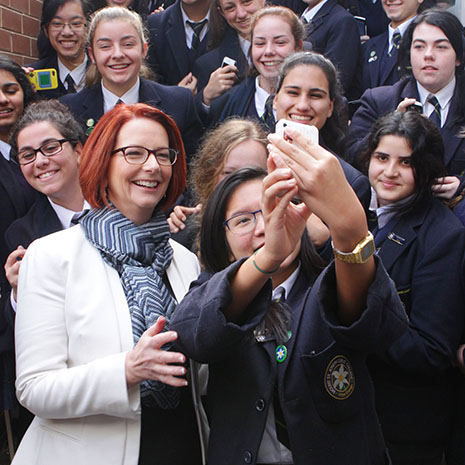