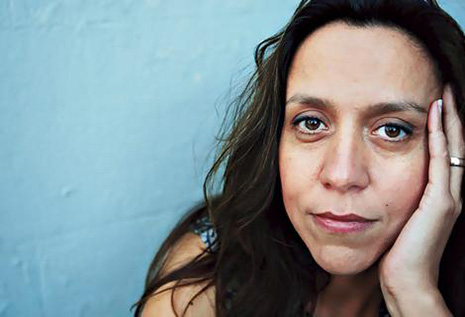 THERE IS A STORY in Bruce Pascoe’s book, Convincing Ground, about a spirit man from a tribe that had been living in the Australian Alps for far longer than any other tribe could remember. During the early days of settlement, the old man came down from the mountains to visit the area known as Port Phillip. He urged the clans of the region to bring him as many axes as they could spare. The axes were needed to cut poles from trees. The poles were required to hold up the sky. The sky was falling down.

We know that the axes were brought to the old man, although there is no historical record of what happened next. There is evidence, however, that the settlers mocked the Aboriginal people for believing the old man’s story. To them it was all Henny Penny rubbish. Pascoe gives a different interpretation: “Perhaps the sky was falling in as far as the big man was concerned, perhaps the spirit man had seen the invasion for what it was and the collection of axes was not for the metaphoric purpose of holding up the sky but to wage resistance in a united stand across the frontier.”

Jump forward about 170 years… Anna Clark’s book, History’s Children, reveals that the vast majority of Australian kids are bored silly by Indigenous history. Upon investigation she discovers that the narrative presented to them is safe and repetitive, consisting of superficial lessons on Dreamtime and didgeridoos. Teachers are unsure of their ability to present Indigenous perspectives, while students feel guilt-tripped by the term ‘invasion’. For our youngest Australians, Indigenous history and culture is still perceived as Henny Penny rubbish.

I picked up both books after watching First Australians: The Untold Story of Australia. The seven-part series was commissioned by SBS, written by Aboriginal filmmaker Rachel Perkins and Louis Nowra, directed by Perkins and Beck Cole, and produced by Perkins and Darren Dale. Each episode covers a different state or territory, telling stories from our post-1788 history. Pascoe, of Bunurong heritage, is one of the many experts in the series who recount, explain and dispute the stories presented.

First Australians left me with much to think about, but the first question on my mind was “Why wasn’t I taught this at school?” Like the kids in Clark’s book, I received lessons on Indigenous lifestyle and history in both my primary and secondary classes, but I don’t remember it being compelling or important. Marcia Langton, whose presence dominates the series, speculates as to why that might be: “Most people want to believe that they have an honourable past and they have honourable ancestors.” The only way to pretend that the nation was developed honourably “is to lie.” The failure of Indigenous history teaching is just one symptom.

The success of the series rests in the way it leads the viewer into stories of hope, of alternatives, before showing us the appalling events that played out. It begins with the image of the British red coats and the people of Warung (Sydney) holding hands and dancing. The date was 29 January 1788, only three days after eleven strange apparitions appeared on the horizon. This “curious and touching attempt to come together and comprehend,” as Inge Clendinnen puts it, becomes a recurrent theme throughout the series. Friendships and alliances between Indigenous and non-Indigenous Australians show that the capacity for a different history – and a better future – has always been present in the humanity of individuals.

The first three episodes are the most effectively crafted. “They Have Come to Stay” (episode 1) tells of Bennelong, who befriends Governor Arthur Phillip, learns European ways and is put on show in London society. In a wonderful moment, he asks if he may kiss a gentlewoman’s hand. As she stretches her arm towards her he quips “I asked to kiss your hand, not your glove.” When Bennelong returns to his own country, race relations have deteriorated and his people have been devastated by disease. Episode 2 gives the story of Truganinni – mistakenly thought to be the Last Tasmanian Aborigine – who was driven by her will to survive. After a bounty is put on all Aboriginal heads she assists an opportunistic Englishman, George Arthur Robinson, to see them onto his “friendly mission” (Flinders Island). As the people die from disease in confinement, other Aboriginal women – living with sealers on remote Islands – endure. In Victoria (episode 3) we learn of the men and women who built Coranderrk, an early attempt at Indigenous enterprise, ultimately brought down by the Aboriginal Protection Board.

The visual components – borrowing from conventional documentary style, rather than aiming for an “Indigenous aesthetic” – are as compelling as the stories. Perkins uses photographs, music and talking heads to tell the stories, just as American Ken Burns did in his acclaimed documentaries on jazz and the Civil War. The use of slow zooms and the repetition of well-chosen images inscribe in the viewer a visual memory. (I was interested to discover in the accompanying study guide that the production team consulted with Burns; it was a “pivotal meeting” for Perkins).

Of course, the use of photography in the series is complicated by the intentions of the original photographer. The series doesn’t explicitly deal with this issue, though it is taken up in Jane Lydon’s book, Eye Contact, which untangles the many motivations for documenting Coranderrk: to show Christian subjects, for the purposes of science and to capture a unique sense of place in a Colonial country. But there is an important moment in the episode on Tasmania when we meet Ricky Maynard, a contemporary photographer and descendent of the women who survived with the sealers. He puts the camera to work for a new purpose, showing resilience against the burden of the past and refuting the myth of the Last Tasmanian and Darwin’s theories on race.

The later episodes try to do too much and are less compelling as a result. Jandamarra (episode 5) was a police escort and stockman who was banished from the Bunuba community for being sexually promiscuous and going against kinship laws. Under competing pressures, he eventually kills the grazier he was working for and establishes a rebel army in the north-west, using stolen gunpowder. This folk hero has a story that rivals that of Ned Kelly, yet many Australians will never have heard his name. Unfortunately, the tale of Jandamarra is lost amid a parallel story of the stolen generation, which had to be told and which deserves an episode of its own. The final episodes bring us into contemporary Australia, through the formation of the Australian Aborigines League in 1933 and Eddie Koiki Mabo’s legal battle for land rights.

After questioning why I hadn’t been taught all this at school, a second, more unnerving thought started to surface: “What if I was?” Had I simply put this history to the back of my mind and forgotten it? We forget things we never use (like algebra). The important stories of Indigenous Australia are simply not present, not in circulation, for many of us. In her statement on the SBS website, Perkins writes that First Australians is “a taste of the story that remains to be understood. Hopefully it will spark national interest in the people on whose lands we have made our homes.” Both through this documentary and as a key figure in the establishment of the National Indigenous Television service, Perkins is using television to address that other “gap” – the gap in understanding.

First Australians will no doubt be used in many classrooms from now on. I can’t say for sure whether kids will like the sophisticated documentary format. But they will be told something of the recent history of the oldest civilisation, and of the land that sustained some 1.6 billion people over the centuries before the First Fleet arrived. As Pascoe says, “if you can’t learn something from a civilisation that successful then you are really defying your own intelligence.” •

Ellie Rennie is a research fellow at Swinburne University of Technology’s Institute for Social Research.