The eventful lives and uneventful memoirs of George Reid and Ned Hogan show that politics and self-reflection don’t always go together. Will John Howard follow their example, asks Norman Abjorensen 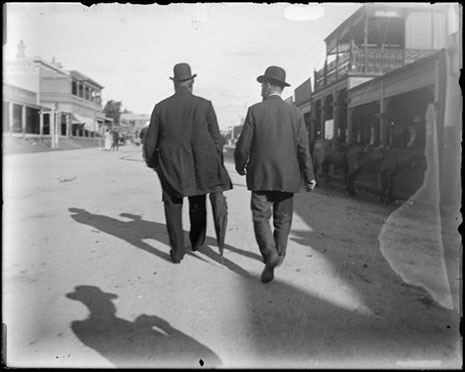 WHAT CAN John Howard tell us that we might want to know in his forthcoming memoirs, due to be published by HarperCollins late next year? From what we’ve heard so far, he remembers everything. But how will he present it?

It is a truism in Australian publishing that the left buys books and the right doesn’t. The publishing gamble here rests on whether the left will want to read Howard and whether the right will break its long-standing habit. Certainly, as Australia’s second longest-serving prime minister, Howard was at the very epicentre of political life for more than a decade, and as such enjoyed a vantage point unlike anyone else: he was Hamlet to any number of Rosencrantzes and Guildensterns.

Whether Howard is intrinsically interesting as a political actor is beside the point; it is how he fills in the gaps and illuminates the process of governance over which he presided that can make a significant contribution to an understanding not just of politics but of national life in the broader sense. Howard’s own distinctive brand of conservatism is a potent force in Australian politics, but has been little appreciated and little understood. If he can articulate this, reflect on it and connect it to larger themes, the Howard contribution might yet be a real surprise packet.

Australia, sadly, has not been especially well served by political autobiography. With few exceptions, political memoirs have not been a fruitful source either for the illumination of Australian history or for insights into the inner sanctum of government. Nor have they shed significant light on crises and turning points in national life.

In the United States, presidents as diverse as Truman and Nixon left useful records of their administrations; in Britain there was, of course, the prolific Churchill but also Eden, Macmillan, Wilson and Thatcher, whose detailed writings added useful detail and perspective to the historical record.

In Australia, Reflections of an Australian Liberal, by the former Victorian government minister Frederic Eggleston, is an incisive analysis of affairs while Alfred Deakin’s The Federal Story, not published until 1944, twenty-five years after his death, has become, albeit by default, a standard reference on Federation. Robert Menzies, for all his long years in office, produced memoirs of distinct mediocrity, while Bob Hawke’s have largely been seen as self-serving and of limited historical value. Gough Whitlam’s record of his government, though not memoir, is useful authoritative history, while his account of the dismissal offers insight into one side of the issue. At least one other former prime minister of the post-war period sought in vain for a publisher, his highly tendentious account arousing universal scepticism, if not sheer disbelief.

Interestingly, it is those not quite at the front rank of political life who have penned the most useful record of events, personalities and processes. The one-time Labor rebel and long-serving cabinet minister George Pearce, Menzies ministers Howard Beale and Paul Hasluck, and Hawke minister Peter Walsh have all provided useful insights into political events in which they were involved. And one must not forget the diarists, Peter Howson, Neale Blewett and, of course, Mark Latham. Yet the historical record is left curiously wanting at crucial stages of the nation’s political life.

George Reid, the nation’s fourth prime minister (and in some ways unfortunate not to have been the first), put pen to paper far too late in his life, at a time when the energies of his prime were long dissipated and events too far back in time for detailed recall. Reid’s greatest days were spent as premier of New South Wales from 1894 to 1899, where his liberal instincts and careful management brought about not only a rapid recovery from the depression of the early 1890s but also significant reforms, notably in education and industrial legislation. On top of this was his vital role in federation, unjustly characterised as a “Yes–No” policy in which he had to balance the interests of Free Trade New South Wales, for which he was responsible, against the Protectionist demands of the other colonies.

Reid governed for much of this time with support from the Labor Party, another delicate balancing act, but this was abruptly withdrawn when the Protectionists, led by William Lyne, matched his concessions, and his government fell in September 1899. It was a cruel blow, but we know little about Reid’s feelings; an even crueller blow was that it robbed him of the chance to be nominated as the inaugural prime minister, which went first to Lyne, as leader of the senior colony, then, when Lyne failed to win the support of the other leaders, to Edmund Barton.

One wonders how this large, shambling, genial man, never known to harbour grudges, either personal or political, took these setbacks and rebuffs. Was he hurt? Crushed? Angry? Resentful? Alas, his wordy My Reminiscences yields only disappointment for the curious reader. Winston McMinn, in his excellent biography of Reid, notes that losing office was “a bitter experience for Reid.” But of his defeat as premier, Reid merely had this to say: “I think the Labour Party cannot be blamed for leaving us and supporting Sir William Lyne. He was expected to be, and proved to be, a much more suitable premier for their purposes that I should have been.”

Reid, of course, had his opportunity in 1904, after the brief Labor government of Watson was brought to an end by its failure to secure desired changes to the Conciliation and Arbitration Bill. It was a tenuous coalition with dissident Protectionists that lasted barely ten months in office, Reid losing his majority when Deakin reasserted his authority. Here, at, least, Reid was more forthcoming in regard to Deakin’s move against him, observing that “at this distance of time it is hard to recall the indignation I felt…” That was all. Reid would never again hold office.

Ned Hogan occupies a unique position not just in the political history of Victoria but also of Australia. Just the third Labor premier in the state in which Labor had been least successful in the first three decades of last century, Hogan twice led governments, in 1927–28 and in 1929–32, in the deepening Great Depression.

He was ignominiously expelled from the Labor Party and successfully recontested his seat as an Independent Labor candidate. It was a time of political turmoil and chicanery in Victoria, and Hogan might have basked in the certain prominence of a former premier no longer beholden to party discipline. Yet what he did was unprecedented: he joined the Country Party and accepted a portfolio in the government of Albert Dunstan, a master manipulator who had edged the United Australia Party, predecessor of the Liberals, out of office by doing a deal with Labor for support in return for concessions.

How was Hogan courted, under what circumstances and by whom? It was a very strange marriage, yet its origins are hidden from us. Hogan’s own self-published memoirs, a mere twenty-seven pages in all, record in some detail how he fell foul of the Labor Party over the response to the Great Depression and was summarily expelled, retaining his rural seat as an Independent Labor candidate.

Writing late in life (he died in 1964), Hogan merely records: “I was officially invited to join the Country Party and when Mr [Albert] Dunstan became premier he asked me to join his government as Minister for Agriculture and Mines.” He held the job until 1943 when he lost his seat.

Just how this devout Catholic, avowed socialist and former trade union official came to rub shoulders with predominantly Protestant anti-socialist farmers is not something we can easily fathom. The bulk of his memoir is devoted to the menace of communism (about which he became an ardent pamphleteer in the 1950s), the finances of railways and the shortcomings of the Bolte Liberal government.

What misgivings and disappointments George Reid felt at the hands of his political vicissitudes and how Ned Hogan came to his second political marriage were not issues either regarded as especially important. We are thus left wondering and a little frustrated; the puzzles have missing pieces.

John Howard has a big canvas to fill, a task too daunting for so many of his predecessors. It might yet be his greatest contribution. •

Norman Abjorensen, of the Crawford School of Economics and Government at the ANU, has written biographical studies of a number of conservative political leaders.