Want to reduce the power of the finance sector? Start by looking at climate change

Despite their lingering power, banks and financiers needn’t be untouchable 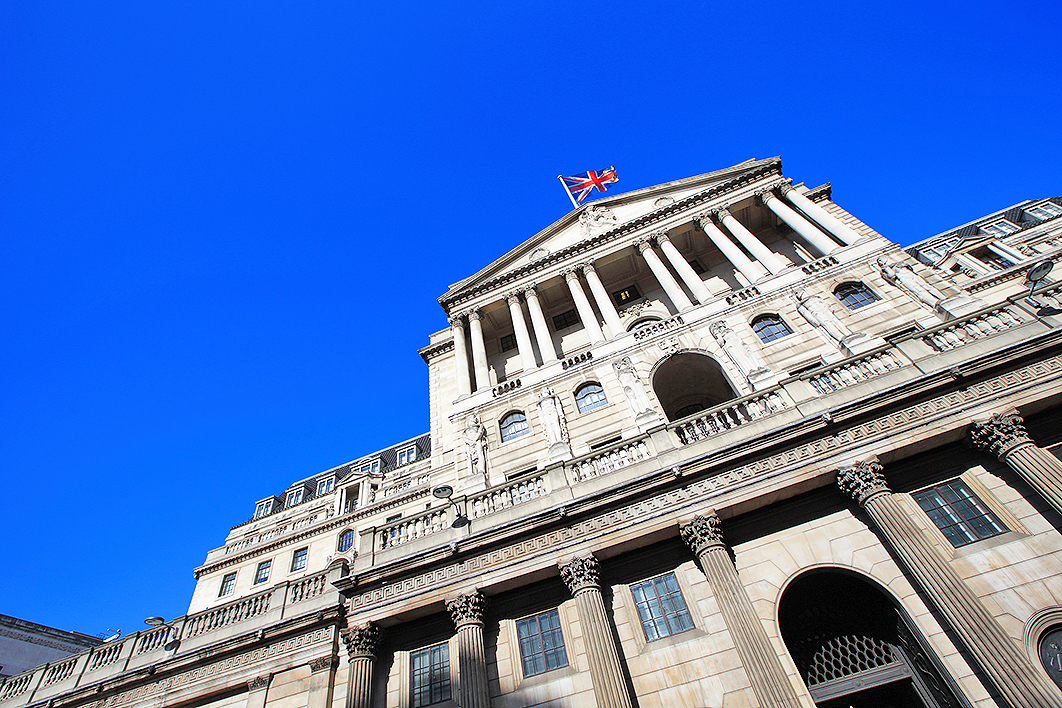 Where it all began: the Bank of England building in London. RyanKing999/iStockphoto

In the lead-up to a revolutionary change, the status quo often seems both unyielding and untenable. The Soviet bloc in the 1980s provides a dramatic example: neither the rulers nor the ruled had any faith in the system, yet it stayed in place, seemingly untouchable. Then, in 1989, a picnic on the border between Hungary and Austria precipitated a collapse that brought down most of the governments of Eastern Europe in a matter of months, and the Soviet Union itself a couple of years later.

Over the past decade, two institutions that have endured far longer than did the Soviet Union and are far more central to our way of life have come under challenge: the carbon-based industrial economy and the finance-based system of global capitalism. The two have been intertwined since their near-simultaneous birth at the end of the seventeenth century. The Bank of England was created in 1694, shortly after the first major private banks, Barclays and Coutts; the first steam-powered pump was patented only four years later by Thomas Savery, and then rapidly superseded by Thomas Newcomen’s 1712 design.

For nearly three centuries, they proceeded in tandem, periodically interrupted by crises of one kind or another. Since 1945, though, their paths have diverged.

While the industrial economy boomed after the second world war, the financial sector was kept under tight control by the Bretton Woods system of fixed exchange rates. But the collapse of the Bretton Woods system in 1971, and the oil crisis of 1973 turned the tables. Economic growth slumped across the developed world; and when it eventually returned, it delivered nothing like the broadly shared prosperity of the long mid-century boom. Wages remained stagnant and inequality deepened.

By contrast, the financial sector exploded in the 1970s, freed from the fetters of Bretton Woods. Global financial flows, previously limited to the relatively modest amounts needed to finance trade and investment, exploded into the trillions and were then multiplied into the hundreds of trillions by derivative transactions. Meanwhile, the consumption of carbon-based fuels continued to grow.

But, as the economist Herbert Stein observed, “If something cannot go on forever, it will stop.” Not long before Francis Fukuyama pronounced the end of history, the first alarms about global warming had led to the creation, in 1988, of the Intergovernmental Panel on Climate Change. In a series of reports, the IPCC has documented the evidence that human activity has caused significant climate change and that maintaining business as usual would render the planet virtually uninhabitable.

As debate over climate policy sputtered through the 1990s and the first decade of the 2000s, Stein’s aphorism seemed to have been upended: the world clearly could not go on burning fossil fuels, but there seemed to be no way to stop it. The Stern report, issued in 2006, was the first serious attempt at setting out an agenda to stabilise the global climate. But economist Nicholas Stern suggested a target of 550 parts per million of CO2, well above the level considered safe by most scientists. More importantly, his proposals assumed that we would continue to burn coal and could solve the emissions problem through the (non-existent then and hopelessly uneconomic now) technology of carbon capture and sequestration.

Less than fifteen years later, it is obvious to everyone (except those living in a right-wing alternative reality) that the decarbonisation process is well under way. Dozens of governments have already committed to phasing out coal-fired power, and ultimately to a fully carbon-free electricity supply. Even Germany, long dependent on coal, says it will close all coal-fired power stations by 2038. Going beyond electricity, France and Britain have committed to ending sales of petrol and diesel cars by 2040, and China, the world’s biggest market, seems likely to follow suit.

Whether progress towards decarbonisation will be fast enough to prevent severe climate damage remains to be seen. The obstacles aren’t technological — most of the necessary carbon-free technologies already exist, and good progress is being made in remaining areas like aviation and cement production. Rather, the blockages come from people who are committed to old ways of doing things, and to the social, cultural and economic order they represent.

Back in 2006, the carbon-based economy of physical production was obviously unsustainable, even if it was entrenched. By contrast, the globalised system of financialised capitalism had never looked stronger. Economists spoke confidently of a Great Moderation, in which a combination of sophisticated financial markets and wise management by central banks would make recessions and depressions a thing of the past.

Two years later, the entire system was on the edge of collapse. It was salvaged by massive handouts to banks, ultimately financed by austerity policies that slashed the living standards of ordinary people. Massive government intervention rescued the banking system, and the bankers, at immense cost to ordinary people around the world.

A decade later, no one has forgotten. If anyone needed their memory jogged, the near-continuous exposure of criminal wrongdoing at all levels of the financial system, from big global banks to small-fry mortgage brokers, has served as a continuous reminder.

Equally continuous has been the failure of regulators to do anything about it. The massive rigging of the Libor system, on which all global interest rates were based, led to a single criminal conviction, along with a few generously compensated early retirements. The Hayne royal commission looks set to produce much the same kind of outcome in Australia.

Monetary policy, meanwhile, was moved to an emergency footing, with very low, or even zero, interest rates. A decade after the global financial crisis, this emergency measure is still in place. As the International Monetary Fund has observed, the longer it continues, the greater the risk of another financial crisis. When the next crisis comes, the task will be one of definancialisation: cutting the sector down to the minimum size needed to meet the needs of saving and investment

So what would a definancialised economy look like? For ordinary Australians, the differences would be relatively minor. The set of financial products used day-to-day by the average household — savings accounts, consumer loans and mortgages — hasn’t changed much in decades. The last major addition to the set was the credit card, introduced way back in 1974. Most of the changes have been in the technology used to manage these products — online banking instead of cheques, paywave instead of imprinting machines, and so on.

A variety of more or less disastrous “innovations” have come and gone, the most notable being the 1980s idea of denominating loans in the Swiss franc and other foreign currencies. When the Australian dollar predictably depreciated against the franc, borrowers found their debts doubled.

The biggest change for households would be the retirement income system. Until the late twentieth century, Australia had a two-tier system: salaried white-collar workers received defined benefit superannuation while blue-collar waged workers relied on the age pension and any personal savings they could accumulate. The central and most attractive feature of defined benefit schemes was an annual income, normally based on salary at retirement, payable for life and indexed to inflation.

The Hawke–Keating government expanded superannuation to cover the entire workforce while initiating a transfer of risk from employers to workers. In the name of consumer choice, defined benefit systems were replaced by accumulation funds, which require individuals and families to bear the risk of fluctuating returns. Despite massive tax subsidies, many households have found this system has been far from satisfactory. An important step towards a definancialised economy would be a winding back of this process, ending with a return to defined benefit pensions.

By contrast with its limited impact on households, definancialisation would have a dramatic impact on the world’s financial centres. Rather than treating complex financial structures as presumptively desirable, the object would be to eliminate them, except where they could be shown to yield a public benefit. International agreements designed to protect such complex structures from “double taxation” would focus instead on ensuring that corporations pay tax in every jurisdiction they operate in. This would largely eliminate complex corporate structures and the array of financial instruments and derivatives that support them.

In turn, the galaxy of legal and accounting firms supporting the bloated financial sector would shrink drastically. In the absence of job opportunities in these fields, the brightest of our young people would fall back on careers as doctors, or scientists or engineers, as they did before the finance boom.

After the failures of the past decade, the desirability of cutting the financial sector down to size seems obvious. But how? While thoroughly discredited in the eyes of the public, the sector remains so powerful as to make the idea of any challenge seem quixotic in the extreme.

The process of decarbonisation provides some useful lessons. For economists, the ideal way to decarbonise the economy is by imposing a price on carbon dioxide emissions. This could be done with a carbon tax that increases over time, gradually rendering more and more carbon-emitting processes uneconomic. Alternatively, companies could be required to purchase emissions permits, with the available number declining over time.

The financial sector equivalent to a carbon price is the Tobin tax, a levy on financial transactions set at a rate low enough to have no effect on long-term borrowing and lending but high enough to render speculative trading and complex derivative transactions unprofitable. If the G8 countries introduced such a tax, and imposed a punitive rate on transactions involving noncompliant tax havens, the daily volume of financial transactions (currently around $5 trillion) could be reduced by a factor of one hundred without any impact on real economic activity.

As with a carbon price, a full-scale Tobin tax may prove too difficult to implement. The alternative route to definancialisation is death by a thousand cuts, using tighter regulation, effectual punishment of criminal behaviour and a comprehensive assault on tax avoidance and evasion. Such measures would push banks and financial institutions back into their basic role of channelling savings into loans and investments. Deutsche Bank’s recent retreat from global banking, driven in part by massive fines for money laundering, may be an isolated case, but it could be the beginning of a trend. The crucial requirement is for regulators and courts to put the interests of the public ahead of concerns about keeping banks in business.

Will such proposals ever be implemented? The financialised global economy appears both utterly discredited and completely untouchable. But as the rapid movement towards decarbonisation shows, appearances can be deceptive. Should the economic crisis feared by the IMF materialise, the demand for change may prove irresistible. •