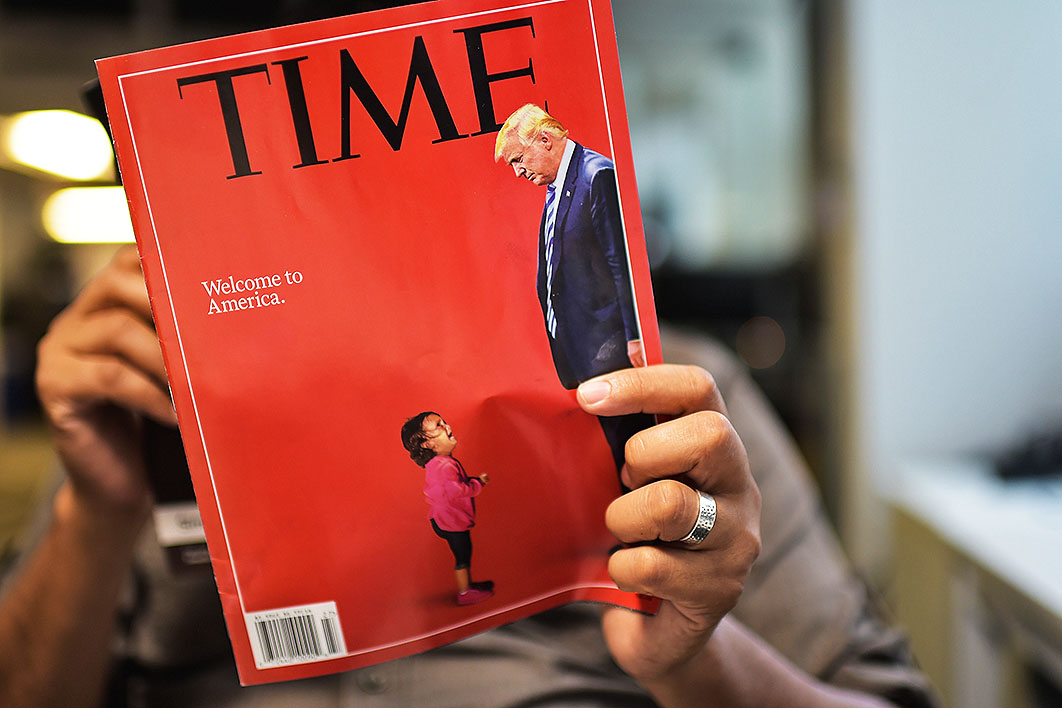 Separating kids from parents attempting to cross the border, and then bragging about it, should’ve been a doddle for Donald Trump. The politics of cruelty comes easily for some, and the president is a natural, delighting his base with his special brand of cruelty as entertainment while neutralising a flabbergasted media. For Trump, there’s never been a line — until suddenly, blessedly, reassuringly, finally, there was.

After a firestorm of images and audio of distressed, wailing children, Trump told a cabinet meeting, “My wife, our first lady, is down now at the border because it really bothered her to be looking at this and seeing it, as it bothered me, as it bothered everybody at this table. We’re all bothered by it.” “Bothered” is as close as this president gets to compassion, so it was a significant backdown.

Part of what has made him so diabolical as a political opponent and as president is how he thrives on outrage and capitalises on the horrified reaction of the press. This time the horror cut through to create a united reaction across the political spectrum. Even Trump’s base, usually baying unwaveringly for blood, paused in confusion. For once, a normal standard of decency applied again.

Cruelty can make for pretty powerful political capital. But it must be wielded subtly and cautiously. Like anything in politics, it all comes down to the messaging. The US administration cocked up its PR in all sorts of ways, making every kind of beginner’s mistake. (Hot tip: don’t wear a jacket emblazoned with “I really don’t care, do you?” to visit children in detention.) Just ask our government. After all, we’ve been perfecting the language of deterrence for decades now.

The very point is the cruelty, and it’s important to keep reiterating it. Many people will go along with that; in fact, they’ll be comforted by it. It’s all done in the name of deterrence. But there’s a small, unspoken caveat. The government must have plausible deniability. It needs to keep a safe distance from the facts, or at least from the effects of the policy on innocent people (a safe distance being the thousands of kilometres between the mainland and Nauru). The main thing to remember is that you should never, personally, directly, mention any kids.

This month will mark five years of detention for 134 refugee children who have been waiting, with no end in sight, on Nauru. Forty of them have been detained for their entire lives.

Try to name one of them. Conjure up a picture, even. You can’t. For good reason. Our governments have known for years that they can never capitalise on cruelty to children, at least not with Australian voters. And that’s because images of children tend to cut through all the careful messaging to provoke an immediate response.

“Because children are vulnerable and blameless — the purest victims — depictions of their suffering have an extraordinarily visceral impact,” writes the academic and essayist Susie Linfield in her book, The Cruel Radiance: Photography and Political Violence. “And so they should. It is not naivete or sentimentality to be moved, pierced or outraged by such images.”

The Trump administration challenged the image of a distraught toddler on the 2 July cover of Time magazine, photoshopped with an impassive Trump under the headline, “Welcome to America.” But it came too late: finally there was a galvanising image of an America that no one, not even Trump’s trolls, could bear.

It’s obvious, yes, and not new: think Nick Ut’s image from 1972 of a naked nine-year-old fleeing an American army napalm attack. Or the late Chris Hondros’s shot of a blood-spattered Iraqi girl, Samar Hassan, just after her parents had been killed. Or Kevin Carter’s photograph of an emaciated Sudanese child, her head resting on the earth, as a vulture stands by.

Kids cut through. Images of vulnerable children seem to be the one deal-breaker when it comes to the power of deterrence policy. Think of any point when there’s been a momentary pause in public sentiment, a moment where people pay attention again. Think of that photo of Alan Kurdi, who drowned off the Greek coast, an image that can be credited with more sympathetic policy settings in Canada and Germany. Think of the Let Them Stay campaign launched in 2015 by Fairfax and GetUp! using images of children and babies set to be sent back to Nauru. They were named, they were given stories, and by the end of the campaign an Essential Poll found 40 per cent of people in favour of letting asylum seekers stay, an enormous lurch from the 30 per cent that pro–asylum seeker sentiment had hovered around for a decade.

Of course, public opinion never stands still. And countries from all over the world are watching Australia’s messaging when it comes to border protection, their governments keen to sample the playbook. But in a political environment in which empathy is derided as weakness, where trolling is a sport and border protection policy is characterised as “not taking the foot off the throat of this threat,” it’s worth trying to learn something from this brief moment. There’s still merit in reminding people of their humanity. Some things still cut through, some things still count. •

Sophie Black, a former Editor-in-Chief at Private Media, is Head of Publishing at the Wheeler Centre in Melbourne.