Days and nights in Taksim Square

This open space in central Istanbul has long been a site of political struggle, writes Alexandra Biggs. Last month’s attempted coup was no exception 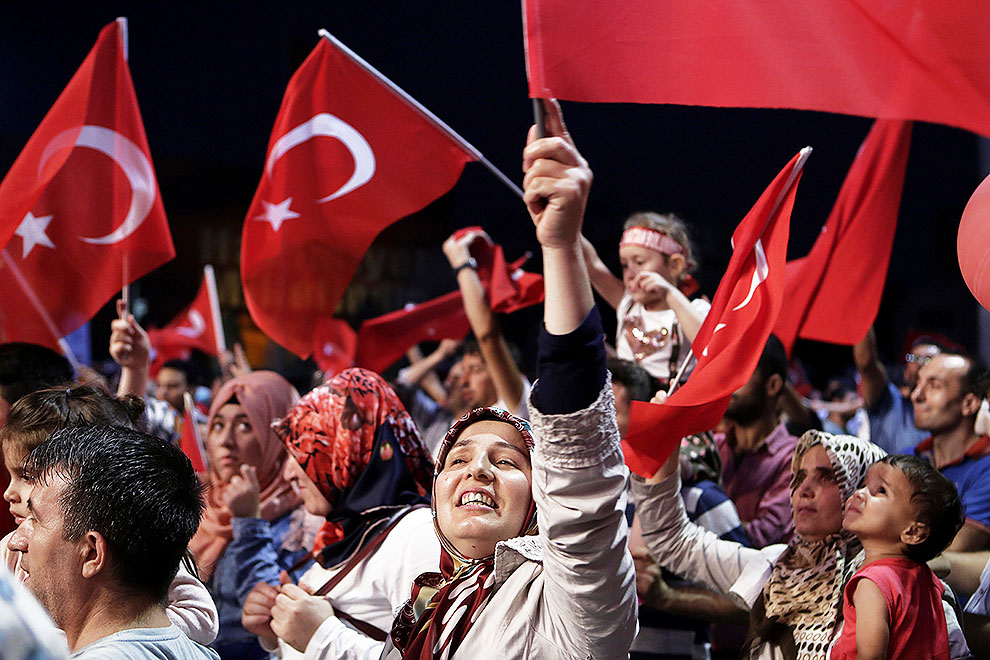 It’s 17 July, the day after Turks woke to the news that president Recep Tayyip Erdoğan had arrived triumphantly at Istanbul’s Ataturk Airport, signalling the end of a turbulent night. In the centre of the capital, Taksim Square is uncharacteristically quiet. After two successive nights on the streets, Istanbulis are capitalising on the relative calm and sleeping in.

The only visitors to the square are those paid to be there: municipal workers erecting Turkish flags, and foreign media reporting on the aftermath of the coup. The former are busily going about their work, putting up row upon row of red-and-white flags, but the journalists appear lost. A foreign correspondent in Turkey would doubtless be confused by the silence of the streets after the seismic events less than forty-eight hours earlier. The only evidence of the failed coup is a military tank parked unceremoniously in the middle of the square, a relic of the violence that prevailed so recently.

Taksim Square has long been the venue for Istanbul’s street politics, bearing witness to generations of protests and social movements. In 1977, it was the scene of what’s known as the Taksim Square massacre, during which right-wing gunmen killed dozens of people. In the 2000s, it was hit by riots and suicide bombs. In 2013, it enjoyed notoriety for the violent crackdown on protests against the redevelopment of the adjacent Gezi Park. “Taksim” comes from the Arabic word for division (it’s where the main water supply was split into district channels), and it is in Taksim Square that Turkey’s political divisions continue to play out.

The night of the coup was no exception: the square saw violent clashes between the military and the civilians who heeded their president’s call to come out onto the streets. I had been there that night with friends, enjoying one of Turkey’s long summer evenings. We had dinner at a rooftop fish restaurant overlooking Istiklal Çaddesi, Istanbul’s main pedestrian promenade, which winds down from Taksim Square to the Beyoğlu waterfront. I bought a pair of shoes I didn’t need, but also decided to come back the next day for some traditional Turkish hamam towels. As it grew dark, our group debated whether we should try to find a nargile bar or go back to our university campus in north Istanbul. Tiredness prevailed, and we decided to head home. Before we descended the escalator to the metro, I remember looking up and seeing helicopters in the sky, which I wrote off as traffic helicopters watching over Istanbul on a busy Friday night.

An hour later, we were told a coup was under way. Any tiredness quickly forgotten, we spent a long night tracking the ebb and flow of events. The helicopters above Istanbul were joined by fighter jets, and tanks took to the streets and the main airport.

As it has become prone to do at any sign of trouble, the Turkish government began systematically shutting down access to social media. First, Twitter became inaccessible, then Facebook. We heard news that internet had been fully cut off in Ankara. Messages were frantically sent out to inform people that we were alive and safe, even if silent.

This draconian social media policy was not to last. Once Erdoğan determined his strategy for defeating the coup – sending the people out to the streets – social media tools became essential to his survival. His memorable call to action was made over FaceTime, an irony indeed for a man who has long condemned social media as a decadent indulgence.

It was four in the morning before we decided that the tide of the coup had turned in favour of the government. At this point I was finally able to sleep, waking a few hours later to the news of Erdoğan’s triumphal return to Istanbul.

Turkey will not forget the night of 15 July. Nor will Turks be allowed to. Already, the Bosphorus Bridge – the main artery between Istanbul’s European and Asian sides – has been renamed the July 15th Martyrs Bridge. Kizilay Square in Ankara, a symbol of Turkey’s founding father Ataturk’s vision for a cosmopolitan European capital, has also been renamed to mark the failed coup. Public memory of the fear and chaos that reigned that night has paradoxically empowered Erdoğan and his agenda.

In the days following the coup, retribution was swift and far-reaching. It felt as though the government was finding new targets every hour: the military, the judiciary, academics, teachers, civil servants. Within just a few days, more than 60,000 had been removed from their positions. Even ordinary Turks felt the shockwaves: every day for a week, they received text messages from the government encouraging them to rally nightly for the cause of democracy.

My liberal Turkish friends universally disavowed the coup, but they didn’t feel it was they whom Erdoğan was calling out onto the streets every day. At one of the nightly rallies held a few days after the coup, I saw what they meant. The event itself was a strange mix of collective mourning and patriotic celebration. The crowd was distinctly conservative, their message openly hostile to outsiders.

With my hair and arms uncovered, I was conscious of standing out in the midst of the several-thousand-strong gathering. While most of the people around me were decked out entirely in red and white, waving flags, a few held signs condemning America. The patriotic fervour of the scene was juxtaposed with those who had gathered in mourning. A large makeshift board listing the dead had been hastily erected by the local municipal authorities, and some were queuing to lay red carnations (the traditional flower of remembrance in Turkey) at its base.

On Istanbul’s extensive metro system, passengers were treated to a bizarre combination of cat videos (of the very cutest YouTube variety) and solemn photos of the civilians who died on the night of 15 July. The intention of these conflicting messages was difficult to fathom – should we be distracted and pacified by the videos, or was the nation in mourning for the martyrs to democracy?

In a reaction to the apparent lack of patriotism that the coup attempt represented, Istanbul’s streets were soon plastered with flags and banners. Many were statements supporting democracy and the leadership of Erdoğan, but some took on a more sinister tone, calling for the summary execution of all the coup plotters. Public sentiment was strongly against those who had attempted the coup, for seeking to undermine Turkey’s proudly democratic institutions, but also recognised that the attempt had harmed both domestic stability and Turkey’s international reputation.

After a decade of efforts by Turkey to position itself as both a regional leader and an important NATO ally, the attempted coup and the reaction to it have undoubtedly complicated Turkey’s relations with the outside world. The crackdown has Turkey’s European neighbours wary about the accession talks that once seemed so promising, while the fallout for relations with the United States is ongoing.

In the aftermath of the coup, many international commentators reminded their readers that Turkey has been prone to military coups. They seemed to be suggesting that Turks were accepting of military takeovers, and that public sentiment may have encouraged the plotters. Within Turkey, there was little evidence to support this view – even before it failed, the coup was condemned by Turks from across the political spectrum. While many had genuine political grievances with Erdoğan and his government, it seemed no one regarded a military coup as an appropriate response. The killing of hundreds on the streets also did little to enamour the perpetrators to the general public.

I was fortunate. I could leave Turkey and recall the attempted coup as an exciting diversion during my visit. At the university I was attending, though, staff members had their leave cancelled and all the deans were removed from their positions. My Turkish friends must endure the consequences of the night of 15 July: crisis measures, a destabilised economy, and shaken relations with the outside world. For any young person, especially young academics, this is a worrying environment.

Turkey is currently under a three-month state of emergency. It remains to be seen what kind of country will emerge from this crisis. •

Alexandra Biggs is an Honours candidate in history at the Australian National University.