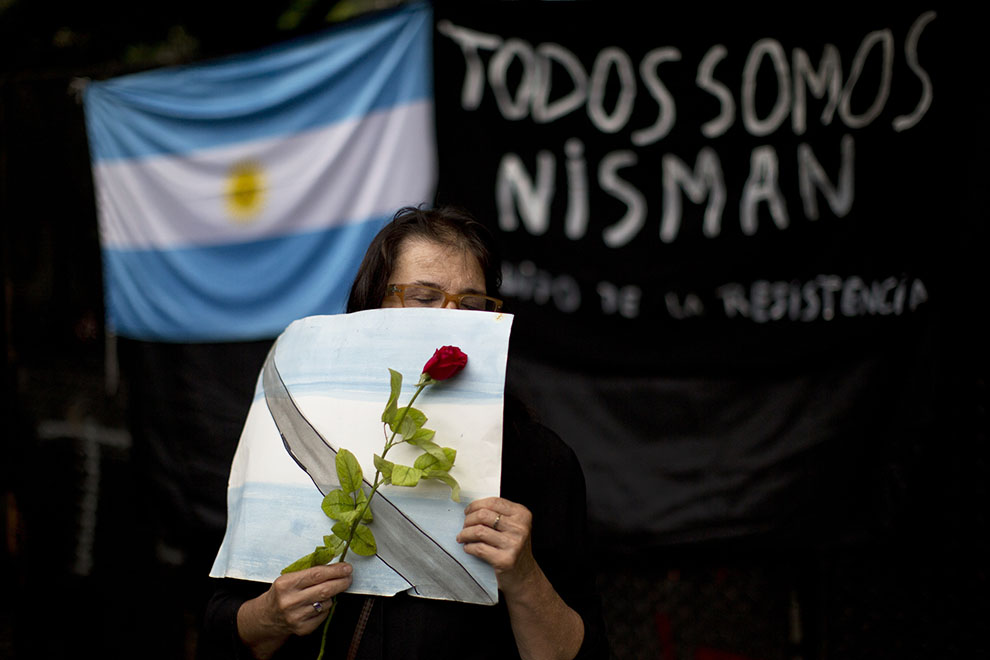 An anti-government protester with a sign reading “We’re all Nisman” on the day of a private wake for prosecutor Alberto Nisman in Buenos Aires, ten days after his death on 18 January this year. Rodrigo Abd/AP Photo

The hot, sticky summer days in Buenos Aires can be suffocating. In the late afternoon, however, when the sea breeze from the Rio de la Plata refreshes the little streets of Buenos Aires – to borrow a phrase from the immortal tango of Astor Piazzolla – porteños awake from the lethargic heat to engage in their speciality, lengthy and often heated cafe conversations.

This summer there is only one topic, the mysterious death of fifty-one-year-old lawyer Alberto Nisman on 18 January. In the month since he was found shot dead, possibly by his own hand, in his apartment in the well-off Puerto Madero district, the case has taken more twists and turns than a novel by Julio Cortázar.

Nisman’s death, and the alleged government cover-up of Iran’s role in the 1994 terrorist attack on a Jewish centre in Buenos Aires – the case he was investigating – have prompted all sorts of speculation. “Mossad and the CIA are working together to blame Iran for the attack and perhaps they are also involved in the death of Nisman,” says Ariel, a porteño who has followed the story. “The US hates Cristina, you see,” he goes on, referring to Argentina’s president, Cristina Fernández de Kirchner. “Obama won’t forgive her for refusing to negotiate a settlement on the defaulted US bonds.”

Given the circumstances and the setting, it’s hardly surprising that conspiracy theories abound. After all, porteños are as attached to psychoanalysis as they are to soccer. As Diego Sehinkman, a Buenos Aires–based psychologist and author, told the New York Times, “If Argentina were a patient, it would be diagnosed as having a disorder involving repetitive compulsion over traumatic unsolved deaths.”

According to Sehinkman, this is a community “resigned to the possibility that the truth will never be known.” And, indeed, the latest polls show that 70 per cent of Argentineans think the Nisman case won’t ever be solved.

Unsolved cases aren’t new in Argentina. The perpetrators of the crime Nisman was investigating – the 1994 terrorist attack that reduced the headquarters of the Argentine Israelite Mutual Association, or AMIA, to rubble – remain unknown. That attack took place just two years after the Islamic Jihad Organisation, linked to Iran and possibly to Hezbollah, claimed responsibility for a suicide bomb attack on the Israeli embassy in Buenos Aires. Small wonder the Argentinean Jewish community, the largest Jewish community in Latin America and fifth-largest in the world, felt unprotected and anxious.

Nisman was appointed in 2004 by Cristina Kirchner’s one-time husband, Nestor Kirchner, the country’s president at the time, to investigate the explosion. He came to believe that the Iranian government and Hezbollah, the militant Lebanon-based Shi’a Islamist militant organisation, were involved. Almost a decade after he began his investigation, and approximately twenty-four hours before he was due to release his 289-page report, he was found dead in his locked apartment. He had reached the conclusion that President Kirchner and her foreign relations minister Héctor Timerman had been involved in a cover-up and had attempted to obstruct his investigation.

Nisman believed that the pair had signed a memorandum of understanding with Iran guaranteeing that Teheran would not be attributed with any of the blame for the 1994 bombing. In return, Iran would provide a number of trade advantages to Argentina. On 11 February, Timerman told the Washington Post that Nisman had it wrong, and that Iran had no connection with the case.

Presidential elections will be held this year in Argentina. Although Kirchner can’t serve another term, the opposition seems to be flirting with the possibility of forcing an early poll in order to destroy her politically. She has made powerful enemies, including among the conservative media proprietors whose monopolistic privileges were seriously cut back by a 2009 bill reversing a military dictatorship–era law that allowed concentration of ownership. The president’s supporters have been reminding anyone who wants to listen of the role played by the conservative media in the 1973 coup d’état in Chile.

Kirchner also has formidable enemies in the judiciary, and her combative relations with judges are legendary. Last week Gerardo Pollicita, the federal prosecutor appointed to replace Nisman, said he will go ahead with the cover-up charges against Kirchner and Timerman.

The death of Alberto Nisman – whether self-inflicted or otherwise – has opened a Pandora’s box of political intrigue and espionage and revealed a cast of shady characters. That the lawyer might be another victim of a larger and more sinister operation is a conjecture gaining more and more traction in these summer days.

The theory goes like this. The CIA, Mossad and some sections of the Argentinean secret service have clubbed together to blame Iran for the 1994 AMIA bombing. As evidence, leading Argentinean investigative journalist Santiago O’Donnell has dusted off the cables to and from American embassies in Latin America, released by WikiLeaks a few years ago, which show an almost pathological obsession in Washington with Iran’s growing influence in several countries in the region.

Nisman was not unknown to the American embassy in Buenos Aires. He was a frequent visitor, providing updates of his investigation and seeking information from the US intelligence services. And he didn’t make his visits alone.

The man who went with him, Antonio “Jaime” Stiusso, the former head of the corrupt Intelligence Secretariat, or SI, has become one of the key characters in this drama. Within weeks of Nisman’s death Stiusso was forced to resign and Kirchner ordered the dissolution of the SI. As its head, Stiusso fed Nisman with intelligence information about the AMIA attack. As the investigation slowly progressed, it’s alleged, Stiusso gained more and more influence over the case. It was no longer an investigation conducted by an independent legal state prosecutor.

Stiusso came out of the shadows in 2003 when he was summoned to appear in court for alleged irregularities during the investigation of the AMIA bombing. The prosecution wanted to determine whether he paid US$400,000 to Carlos Telledín, one of the suspects, to testify that officials of La Bonaerense, the secret service apparatus of the Buenos Aires Police, were behind the transgressions.

La Bonaerense and the SI were involved in a fight for power and influence within Argentina’s secret services. Inherited from the brutal Argentinean military dictatorship’s dirty war against left-wing dissidents, secret intelligence agencies are a feature of just about every arm of the state. Fragmented and unaccountable, they are a state within a state.

Stiusso – the owner of a staggering 277 mobile phones – had at least three phone conversations with Nisman the day before he was found dead. The investigation into the death has established that their last conversation took place at 5 pm and lasted more than ten minutes.

The whereabouts of Stiusso, who was due to give evidence last week to the judge investigating Nisman’s death, is unclear. Several other intelligence agencies appear to have effectively declared war on him. Hector Schamis, an Argentinean scholar based in Washington, has no doubt that the last thing the Argentinean government wants is Stiusso’s statement. If he speaks, says Schamis, “he will tell of twelve years of government extortion, spying on journalists, magistrates, and the opposition.”

Nisman neither owned a gun nor knew how to use one. After all, he had several bodyguards to look after him. The Bersa .22 found in the floor of Nisman’s apartment on 18 January belonged to Diego Lagomarsino, an IT specialist who provided assistance to Nisman’s investigation into the bombing of the AMIA.

Lagomarsino told Viviana Fein, the judge investigating the death, that Nisman had summoned him on the day before his death, asking to borrow his gun and seeking instructions on how to use it. Nisman appeared to be concerned for his own safety and distrustful of his bodyguards. Lagomarsino – a “ghost employee,” according to the Argentinean press – went to Nisman’s apartment in the mid afternoon and then, with his gun, later in the evening. He was the last person known to have seen Nisman alive, and has been charged with possessing an unlicensed gun.

It may well be that Nisman took his own life – most evidence found so far sustains that theory – but many here in Buenos Aires see it as a “state crime,” committed directly or indirectly by a government apparatus that failed to protect him and has so far failed to find the perpetrators of the 1994 attack, in which eighty-five were killed. There is a collective feeling – in these summer days in Buenos Aires – that Alberto Nisman, Argentina’s state prosecutor, was victim eighty-six. •

Antonio Castillo is a Latin American journalist who teaches journalism at RMIT University in Melbourne. He is the author of Journalism in the Chilean Transition to Democracy, co-author of Cosmopolitan Sydney, and co-managing editor of Global Media Journal.