Books | Whatever its virtues, more free trade isn’t a slogan likely to win over sceptical voters 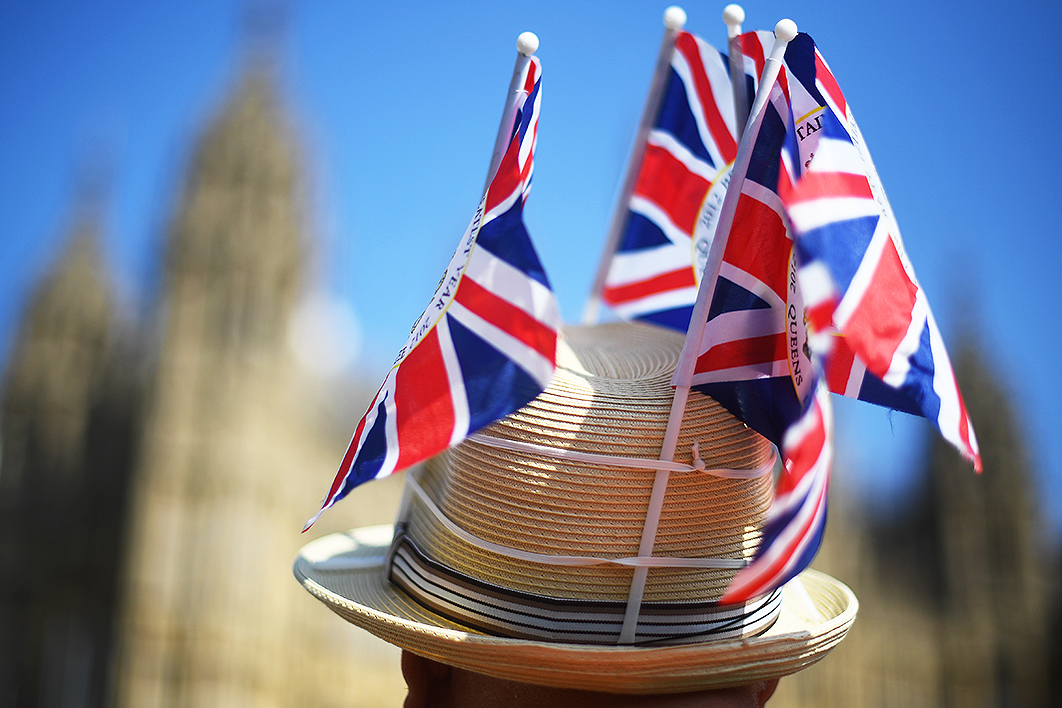 My country, right or wrong: a pro-Brexit protester outside the Houses of Parliament in London in March this year. Victoria Jones/PA Wire

Kimberly Clausing would no doubt have been relieved by this week’s news that Donald Trump doesn’t plan to escalate his trade war with China after all. The American president had earlier tweeted plans to impose “small” tariffs on US$300 billion of Chinese imports from 1 September, sending shockwaves through global financial markets.

Clausing is in good company: economists the world over had been watching in despair. Larry Summers, a former chief economist at the World Bank, had rung the warning bell, saying that growing trade tensions with China could have brought America to “the most dangerous financial moment” since the global financial crisis.

That’s because tariffs almost always make countries worse off. If imports from China are made more expensive, American consumers will pay more for iPhones, shoes and toys. And American industries that export to China could find it more difficult to sell their goods — as US soybean farmers discovered when China refused to buy their products in retaliation for an earlier round of Trump tariffs.

As Clausing shows, fewer barriers to trade mean that countries can specialise in producing what they do best relative to the rest of the world, increasing overall global output. Innovative ideas spread more widely, borrowers and lenders benefit, and consumers can buy cheaper and better-quality products.

The case for free trade is as familiar as it is compelling. So why is the United States reverting to protectionism?

Clausing’s thesis is that the political backlash against globalisation has its roots in the economic woes of lower- and middle-class Americans. Voters seeing inequality grow and incomes stagnate are questioning whether the benefits of globalisation outweigh the costs.

She pins the blame on policymakers who failed to ensure that the benefits of globalisation were evenly shared. That’s because trade creates winners and losers, even if it makes us better off overall. The pain felt by the losers is very real, and often geographically concentrated. Workers in the United States feel the sting especially acutely, because the American social security net is not particularly generous, and many regional US communities have grown up around single industries.

At the same time, Clausing observes, technology and the global economy have concentrated wealth and power in the hands of a few. Corporate profits have swelled as multinational firms exploit differential governing systems to pay less tax and avoid regulatory burdens. The rise of winner-takes-all markets — in which the best producer in an industry gains a disproportionate share of that industry’s returns — has seen revenues of the top 10 per cent of US firms grow significantly faster than the rest of the pack. And the threat that firms will shift production to countries with lax labour standards and few environmental regulations can spark a “race to the bottom” rather than policies that would rein in corporate power.

Clausing sees these flaws, but implores her readers not to throw the baby out with the bathwater by turning away from an open, global economy. She points out that greater protectionism will only make things worse, and will ultimately hurt poorer people the most.

The solution, as she sees it, is for countries to become more open, for nations to be more willing to work together on global policy issues, and for leaders to enact progressive tax policies to share the gains from globalisation between rich and poor.

Trade agreements can — and should — counter policy competition between nations, she says, by “helping governments work together” on difficult global problems. International cooperation is needed to crack down on tax havens, counteract climate change, and enforce internationally consistent labour standards. More funding for education and structural-readjustment programs can reskill workers after trade and technology shocks.

The problems Clausing identifies are worth thinking through carefully, and her solutions are what you’d expect of a well-trained economist with left-leaning social values. But there’s something missing here.

On the one hand, as economist Dani Rodrik points out, compensating workers who lose out from globalisation is made more difficult under free-trade rules that see any domestic regulation as a barrier (or facilitator) of trade competitiveness. On the other hand, figuring out a harmonised set of agreements to spread the gains of free trade more broadly could undermine the right of sovereign nations to design their institutions and regulations.

The problem of sovereignty sits at the heart of the backlash against globalisation. Social scientists have shown that nationalist sentiment isn’t most prevalent among voters who have been “left behind” by the winds of global change — exit polls in the 2016 US presidential race showed that white and relatively wealthy voters delivered Trump into office.

While economic outcomes matter to Trump’s base, a much stronger driver of nationalist sentiment for this group is whether they feel an existential threat to their status in society, or their sense of national identity. Nothing is scarier to nationalists than the sense that traditional cultural norms are being whittled away by global elites in Brussels or Geneva. That’s why Donald Trump — and Boris Johnson, for that matter — focuses so heavily on “taking back control” of his country’s national destiny.

Clausing may argue that her book is aimed at Democrats rather than Trump voters. But the twenty-odd Democratic candidates who are gearing up for a presidential race need to convince at least some Trump voters to support them this time round. The trouble is, setting out a policy platform that promises to solve the economic woes of marginalised US citizens through more international agreements could trigger a stronger nationalist backlash, even with structural-readjustment programs for dying industries, reskilling for workers, and welfare for those who struggle to find new work.

To paraphrase British cabinet member Michael Gove, people have had enough of experts. Technocrats who wish to promote an open, global economy will get nowhere without listening to people who are sceptical of its benefits and finding ways to allay their concerns. •

Carmela Chivers is an Associate at Grattan Institute. Views expressed are her own. Follow Carmela on Twitter: @CarmelaChivers

Looks like America: Ilhan Omar (centre) and fellow representative-elect Jahana Hayes after a group photo for the new members of Congress outside the Capitol Building in Washington in November 2018. Kevin Dietsch/UPI 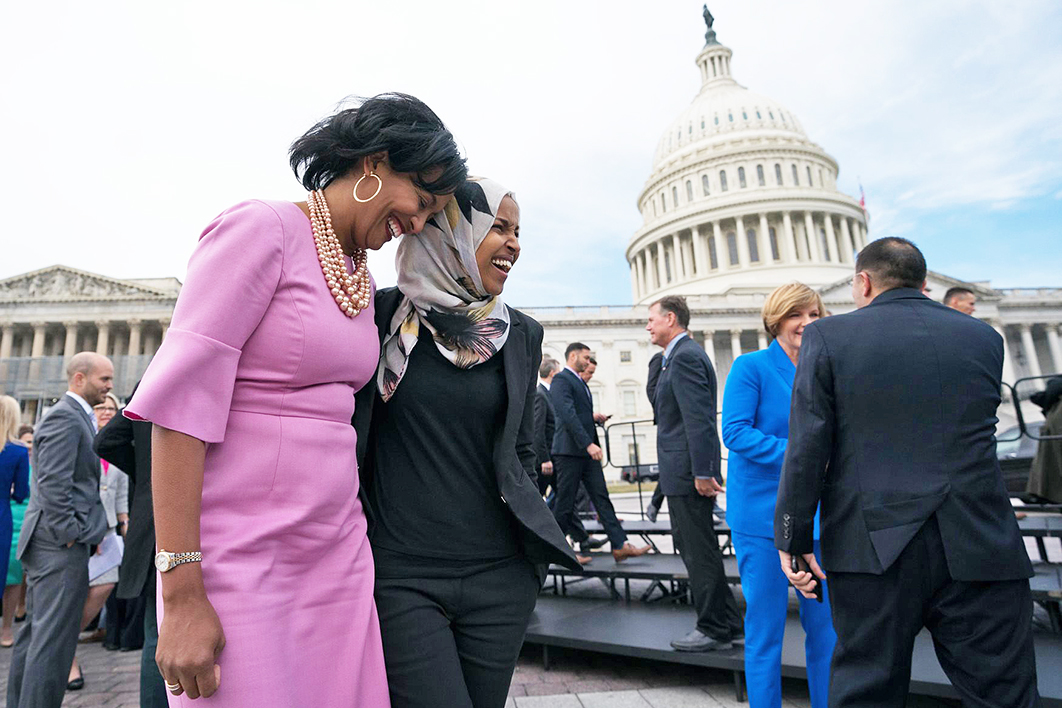 Looks like America: Ilhan Omar (centre) and fellow representative-elect Jahana Hayes after a group photo for the new members of Congress outside the Capitol Building in Washington in November 2018. Kevin Dietsch/UPI