Designs on the landscape 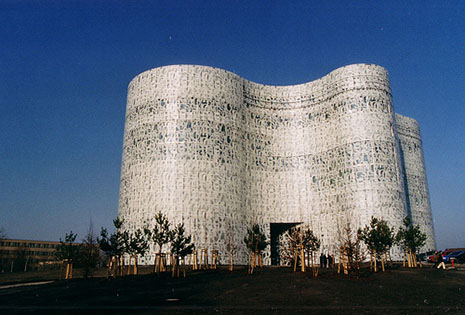 IN EARLY 1990, after the fall of the Wall, I travelled south from Berlin into eastern Germany and saw a blighted land. The East German communist regime had made East Berlin the country’s show capital and neglected other areas. Buildings still lay in rubble forty-five years after the end of the second world war. The environment was terribly degraded.

The Lusatia region around the middle-sized city of Cottbus, a hundred kilometres to Berlin’s southeast, was East Germany’s centre for brown coal, providing the briquettes used in eighty per cent of the country’s power stations and in every home. Burning the coal made the air acrid, created acid rain and accounted for 70 to 80 per cent of East Germany’s carbon dioxide emissions.

At least 244 villages in the region were emptied of their population and demolished to make way for the open-cut mines. The huge scar they left behind was known in German as the Brand Canyon, the “canyon of fire.” Imagine Queenstown in Tasmania stretching over 200 square kilometres and deep into the earth. Huge excavators churned up the ground and left a moonlike expanse of craters and dunes.

The name Lusatia – Lausitz in German – derives from a local word for swampland, but the process of pumping out water to extract the coal had rendered the region dry and desolate. Insects usually found only in desert regions invaded the region and, when the wind got up, sand and grit swept through the air.

Lusatia hit rock bottom in the early 1990s. Much like the rest of East Germany, the region failed to benefit from German unification, with investors shunning the moribund industries and dreadful environment. There were massive lay-offs as Russian gas began to flow to Germany; mines were closed and the abandoned open cuts began to be filled with rubbish from Berlin. In 1991 the region gained notoriety after a shocking series of attacks on asylum seekers’ hostels in Hoyerswerda, to the south of Cottbus, and Eisenhüttenstadt, to the north.

It seemed like a region in terminal decline. And yet, when I returned to Lusatia for the first time recently, I found a land being remade. Brown coal is no longer king. Germany, with a population of eighty million, uses less than half the brown coal East Germany once used with a population of seventeen million. The number of employees in the region’s coal-mining sector has fallen from 140,000 to 7000. The name of the local football team, Energie Cottbus, still recalls the region’s once-dominant industry but in many ways a post-industrial economy is emerging.

The transition is symbolised by two very different building projects that commenced in Cottbus in 2002. In 1928 a power station began operating on Cottbus’s most elegant river bend. It was closed down in 1959 when other plants took over, and lay derelict for over forty years. In 2002 the site was selected for the city’s new museum of art. With €8 million (A$11 million) in local, federal and European funding for regional development, the city of Cottbus oversaw a development that shows vividly how something new can emerge from the ruins and resources of the past. The old building was not razed but remade.

When the museum opened in 2008 the public saw that a derelict institution had come alive, in the same way that Bankside power station became London’s Tate Modern. The cavernous interiors were turned into a series of galleries of varying sizes to accommodate large and small artworks. A glass roof over the former courtyard joined the main building with outlying structures like the former switch room. Red window frames and railings were added to accentuate the russet of the original bricks from the nearby open cut at Großräschen. The museum’s collection and exhibition program was built up concentrating on themes that capture the challenges faced in the region: landscape, space, nature and environment.

The second building could hardly be more different. It is the ultra-modern library of Cottbus University, designed by the Swiss architects Herzog & de Meuron, best known for designing the Tate Modern. The building, pictured at the top of this page, has a prominent site on Karl-Marx-Straße, one of the main roads into Cottbus. It is built on a slight mound – a rarity in an extremely flat region – as a cost-saving measure when it proved too expensive to sink the underground storerooms deep into the earth. But the mound elevates the thirty-two-metre-high structure above the surrounding area, and the building seems almost to float in the air. Its curves catch the light from different angles. Two layers of glass form the outside and the space between them buffers the interior against the direct sunlight and makes the building highly energy-efficient. On the outer layer, letters in seven different typefaces wrap around the building without forming any words. Different fonts are highlighted, as if on a computer screen, as the sunlight flickers.

The workspaces inside are astounding. The colour scheme is a vibrant mix of yellow, pink and blue. A magenta spiral staircase links all six storeys like an enormous hollow screw holding the building together and making it into a continuous space. All the workspaces have computers or computer connections so that library users can call up electronic resources as well as books from the storeroom. Called the Information, Communication and Media Centre, the building announced the intention of the university and city to be at the forefront of information and communication technologies. The state government, the federal government and the European Union contributed €28 million for building, €1.9 million for furniture and equipment and €2 million for site fees. The centre opened in 2005 to national and international attention. The German newspaper Welt am Sonntag commented: “In the poor house of the republic, in Lower Lusatia, there are places of hope.” The establishment of this iconic centre is important to attract students from Germany and abroad to offset the loss of young people from the city. In 2009 Cottbus lost the status of a large city when its population fell below 100,000 (and it consequently is obliged to shrink the size of the city government). It has introduced a series of benefits and bonuses for students who relocate to the city.

Outside the city an extraordinary transformation of the landscape is under way. Initially, some of the disused open cuts were simply filled from soil heaps and sand to make level fields and plantation forests. But this approach was short-lived: the fields were unproductive and planting over the holes was criticised as a cover-up job by locals and environmentalists. It made for a bland landscape and papered over the past.

Gradually a network of city planners, community groups and researchers at Cottbus and other universities developed a bolder approach that designated the region as a “workshop for new landscapes” in which creative and ecological projects could take root. Individuals and organisations contributing to the public discussion about the region’s future included the local architectural firm, Joswig, headed by Hannelore and Wolfgang Joswig; Heinz Nagler, a professor of architecture who moved to Cottbus University from Stuttgart, another city that had remade itself; and Dieter Schwirten, who moved from West Germany to become managing director of the Lusatian Brown Coal Corporation. A common thread running through their ideas was the need for bold, long-term planning. “We must do something that we actually don’t dare to do,” said Alois Seewald, head of Cottbus’s planning authority, in an article in Der Spiegel entitled “Castles in the Air from Pits of Poison.”

Wolfgang Joswig, in particular, helped to coalesce local and state government support to establish the region as the showplace for new landscape and design projects under the banner of the Internationale Bauausstellung, or IBA, an institution traditionally associated with urban renewal through innovative architecture. The IBA provided an umbrella to gather funding and run competitions for building and landscape renewal projects in the region. Between 2000 and 2010 an array of ecological, technological and town restoration projects was established in Lusatia under this umbrella, funded by the federal government and the European Union.

Not just a series of projects, the IBA initiative aimed to remake the region’s entire landscape. Water became the centrepiece of this revival. The bold new vision for the region turned the necessity to pipe water into the region to restore the desiccated ground into the idea of an extensive lakescape. Since 2000 this has become the largest rehabilitation of a landscape undertaken anywhere.

Redeployed miners cleaned up the open cuts and ploughed in chalk to counteract residual acid. They laid underground explosives to compact the earth so that the floors and sides of the open cuts would hold firm. Then they ran pipes into the huge holes to bring in water from nearby rivers, the largest being the Oder and the Neisse, which are prone to flooding.

Twenty-seven disused pits have begun filling with water, but the network of lakes will take decades to finish. The Großräschen pit will take until 2015 to flood; in the same year the 1900-hectare open cut in the north of Cottbus north will be decommissioned and the pit filled over the next fifteen years. Eventually a chain of lakes will stretch over 130 square kilometres, 55 square kilometres of it navigable without interruption via a chain of canals. Bicycle travel is also being promoted by a network of paths across the flat region.

Above: The bio towers in Lauchhammer, relics of the coal industry.
Photo: biotuerme.de

The restoration doesn’t aim to cover the past. The shapes of the open cuts have been retained and their rocky cliffs will always be obvious as incisions made into a flat landscape. The new landscape is clearly a designed space, not untouched nature, and viewing platforms are installed around the pits so that visitors can watch what is happening. And other relics from the coal industry have also been restored – including the remarkable bio towers in Lauchhammer, which previously cleaned polluted water from coal production and now form a tourist attraction and festival site.

Apart from providing inspiring examples of restoring a wasted landscape, the projects in Lusatia have shifted the debate about the economic future of the region. They recognise the coal-mining past, but give the lie to the argument that the region needs brown coal to survive economically. The last open cuts are not yet closed, but new technologies and industries are already established at the university and in the region’s redevelopment sites. Post-industrial tourism is growing, built on the popularity of cycling and interesting monuments from the mining past like the bio towers.

WHEN I left Lusatia in 1990 it was a relief to escape the polluted air and the ruined towns. In 2010 it was a different story. I didn’t want to get away. I had caught a glimpse of the region’s future and wanted to see more. I heard about the burgeoning alternative energy industry nearby around Bitterfeld, previously infamous as the most polluted place in Europe, so toxic that it had the malady “Bitterfeld complex” named after it. Now it is a leading centre for solar-cell technology after the company Q Cells invested in developing photovoltaic technologies discovered in Australia and within ten years expanded from seventeen employees to more than 2000.

In the early 1990s, after the initial euphoria of reunification faded, there was gloom about the old East Germany. Around the time that Lusatia hit its lowest point with the resentful attacks on asylum seekers’ housing, there was talk of reunification being a failure. Western politicians stopped referring to “our brothers and sisters” in the east and instead referred to “our cousins” there. Twenty years later towns like Cottbus are still poor cousins but we can see the outlines of their future. •

Glenn Nicholls is an adjunct researcher with the Institute for Social Research at Swinburne University of Technology.