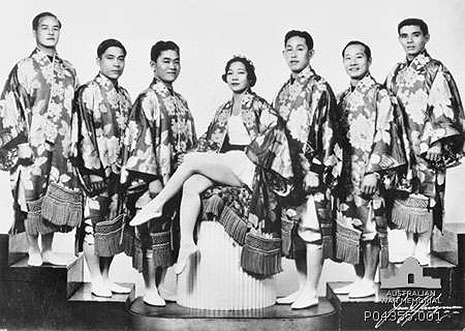 Beautiful enemies: members of the Japanese Ueno Acrobatic Troupe, including its leader, Albert Ueno (third from left), which toured Australia as part of Wirth’s Circus in the 1930s. Australian War Memorial

AFTER Japan entered the second world war all people of Japanese descent in Australia were interned as enemy aliens. Among them were the members of a performance troupe, the Ueno acrobats, who were on a tour of the country. The troupe had toured Australia frequently during the 1930s with Wirth’s circus; their star, Kaichi Namba, was famous for ascending stairs on his head without any help from his hands. Where no stairs were available Namba, undaunted, went head first up the rungs of a ladder.

After the end of the war the Ueno acrobats were among 4000 people deported from Australia to Japan. A thousand of them had been interned from within Australia and 3000 had been sent for internment here from the Dutch East Indies or islands in the Pacific. They were treated harshly, as if they bore responsibility for Japan’s wartime atrocities, and Australian authorities took no responsibility for their welfare during or after deportation. It is only from the energetic research of Yuriko Nagata that we know about individuals’ fates.

Remarkably, Nagata discovered that some Australian guards from the internment camps were sufficiently concerned about internees that they tried to find out what had happened to them. One former guard, Francis Sproat, learnt that Kaichi Namba had been sent to a repatriation centre in Kanazawabunko, where he was struggling to adapt because his constant international touring meant he lacked Japanese language skills. Namba soon moved on to the United States to continue his career as a performer, touring with the Ringling–Barnum circus. Other members of the Ueno acrobats stopped performing, their last show having taken place in Tatura internment camp just before the end of the war.

Cory Taylor draws on Nagata’s research to create a love story involving an Australian guard and an internee from the Ueno troupe. The “beautiful enemy” of her novel is the Japanese acrobat Saburo, or Stanley Ueno, who attracts the desire of Arthur Wheeler, a seventeen-year-old soldier assigned to guard the camp. From the first time he sees him, Arthur yearns for Stanley, but he does not declare his love because he feels doubly ashamed of his homosexual attraction to an enemy alien.

The fictional Arthur is the narrator of the novel, a device that initially works well by providing a vivid view of the tensions in the camp from one of the participants. Realising that his role as a guard is superfluous – the internees have nowhere to escape to – Arthur spends his time teaching English and tennis to young internees, competing for their attention with the fanatical Baba-san, who runs a study circle to maintain loyalty to Emperor Hirohito. Arthur tries to establish intimacy with Stanley through tennis games but Stanley drifts to Baba-san’s group.

At the end of the war Arthur attempts to prevent Stanley’s being deported, but he can only watch helplessly as the internees are packed off on a ship far too small to take them all. Stanley departs, sobbing, after a soldier smashes his head with a rifle butt, his last experience on Australian soil.

In 1963, seventeen years and three failed marriages later, Arthur seeks Stanley out in Japan. Through his own eyes we see him once again fail to express his feelings.

“You were the best, bravest person I ever knew.” I blushed. This was the nearest I’d ever been to declaring my love for him. A better man would have rushed to Stanley and embraced him at that moment, but I sat numbly in my chair and stared at the floor.

Arthur doesn’t see Stanley again but learns of his death in 1981 at the age of fifty-one from a heart attack. He grows old, contemplating the disappointments and failures of his life.

As the book proceeds it is increasingly weighed down by Taylor’s decision to make the unreflective Arthur the narrator. Although he is writing this account in 1981, after Stanley’s death, Arthur’s narrative proceeds without the wisdom of hindsight. Despite his love for Stanley, he has not moved beyond referring repeatedly to the “Japs,” and nor does he register the change in attitudes to homosexuality since 1945. His moments of self-irony – a reference to the fact that he doesn’t know whether he is “Arthur or Martha” – fall flat.

A moment of insight comes when another character’s perspective takes over briefly. In 1960, Arthur’s son Stuart tells him to visit Stanley. Oblivious to the changing times, Arthur is astounded that Stuart is not scandalised by his love for Stanley, only bemused by his failure to declare it.

“Just tell him how you feel,” Stuart said in his matter-of-fact way. “Tell him you’ve never forgotten him. Tell him he was the love of your life.”

I have to admit I was shocked… “Don’t be ridiculous,” I said.

Arthur’s constrained narrative voice is intended to show that he never grows up. He is perpetually the seventeen-year-old who arrived at the camp, trapped between childhood and adulthood. When he meets Stanley in Japan, the thirty-three-year-old Arthur feels that “immediately I was seventeen again.” He tells Stanley, “The past has a hold over me I can’t explain.”

Ultimately Arthur reduces his own life story to a mundane sequence of events. The facts, he writes, “are simple enough. I loved someone, then I lost him. It’s a common story. I hear similar stories all the time.” This is a depressing resumé given the dramatic nature of the events Arthur relates and their historical context.

The novel would have been far more compelling if Arthur’s unsophisticated perspective had been contrasted with others’ or cast in a broader context by an overarching authorial voice. Because there is no interplay between past and present or fiction and historical fact, many readers will be left unaware that the Ueno acrobats were real people interned for years in Australia.

My Beautiful Enemy is a flawed novel but an original love story, set against the background of a little-known but important episode in Australian history. The internment and deportation of enemy aliens in the second world war was fraught with drama and trauma. Cory Taylor shows how guards as well as internees could be left scarred for life. •

Glenn Nicholls is the author of Deported: A History of Forced Departures from Australia.