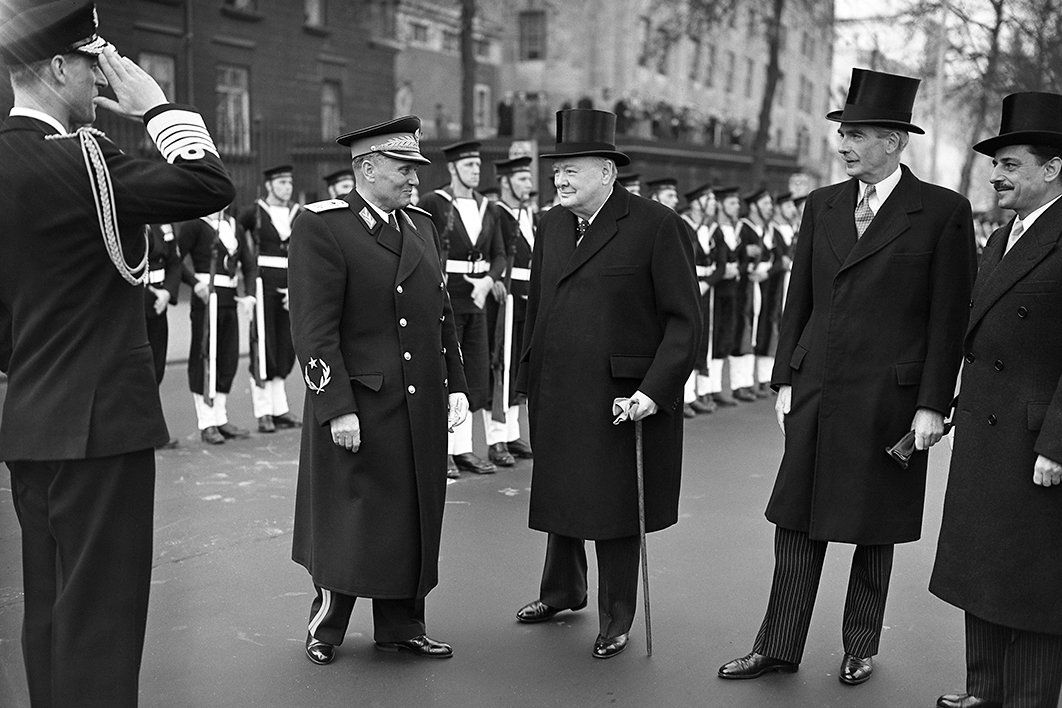 Do individuals make history or are they compelled by forces beyond their control? This is the question Ian Kershaw tries to answer in Personality and Power, his new study of twelve twentieth-century European leaders. This is not just an academic exercise: understanding agency, or lack thereof, is crucially important to those who want to shape the world as politicians, businesspeople, intellectuals, soldiers or “influencers.” And, of course, it should matter to the rest of us, who have to live with the consequences of decisions taken by those in power.

Despite the misgivings of professional historians, this quest for understanding — the hope that we can learn from history — is indeed one of the reasons why historical works continue to attract readers well beyond academe.

Philosophers have long debated the question of agency and constraint, and Kershaw’s introduction is a clear-sighted guide. For determinists, leaders are driven by passions and hindered by their location and time, the consequences of their actions building up into processes and systems no individual controls. For romantics, at the other extreme, history is made by “great people” (or, mostly, “great men”) who shape events with vision and willpower.

In any polarised debate, there’s a golden middle. Remarkably, here it was formulated by a radical: Karl Marx. From a determinist starting point, he tried to make sense of how, at certain historical moments, individuals can prove decisive. He distilled this insight in a statement that has become something of a platitude: people make history, but they make it under conditions they neither created nor fully control.

Kershaw is a historian, not a philosopher. And historians can’t say in the abstract whether a person can “make history.” It depends on context. Certain situations and certain institutional arrangements lend themselves more to romantic-looking action, while others might constrain even the most headstrong and visionary individual. Power, of course, plays a role here: it’s the ability to make others do as you please. If you are in a position of power, your decisions — good or bad — tend to have more of an impact than if you are not.

Even among political leaders, though, circumstances matter: the domestic and international context, the problems needing to be solved and the means available to do so, and whether or not they are lucky. Some contexts will allow the leader’s personality to have a massive impact; others will not. And a strong personality’s impact on the course of events can be altogether different from their long-term legacy.

The two extreme cases in Kershaw’s sample are Yugoslav dictator Josip Broz Tito and German chancellor Helmut Kohl. Tito clearly impressed Kershaw. He appears larger than life on these pages: a man of strong intellect, physical and political bravery, expansive sexual appetites, brutality, callousness and charm. Able to suffer stoically during the war, he embraced the good life once he could: this was partisan leader turned head of a communist nation who liked to cruise the world on his private yacht.

Contradictory as Tito was, he was the ultimate example of a charismatic leader: without him, the Yugoslav partisans could not have done the incredible and defeated the German occupiers with only minor outside help, a unique achievement during the second world war. Without Tito, likewise, communist Yugoslavia could not have stayed out of the Soviet orbit after 1945, taking a leading role in the movement of non-aligned states during the cold war. And without Tito, Yugoslavia, that somewhat artificial creation of the aftermath of the first world war — neither a nation-state nor an empire — would have disintegrated long before it did.

At the other end of the spectrum is Kohl, German chancellor for an incredible decade and a half, 1982–98. Something of an unimaginative nonentity, he was often clumsy on the world stage and entirely lacking in vision beyond what he could see from his reserved table in his local pub, where he would talk to his cronies and eat the most ghastly of all German dishes, Saumagen. The butt of jokes by the German intelligentsia throughout his years in power, his ordinariness was what attracted many voters: this was a dull country longing for stability rather than excitement.

To his credit, Kohl was a far cry from the neoliberal disruptors in Britain, Australia and the United States. His government reacted to the same crisis of postwar welfare capitalism that brought Margaret Thatcher to power by adjusting the welfare state rather than destroying it.

Had Kohl resigned in 1988, he would have been no more than a footnote in the history books: in Kershaw’s words, “an entirely unexceptional democratic leader.” But then came 1989, the year the crisis erupted in Eastern Europe and the Soviet empire imploded. The wall dividing East and West Germany, that concrete symbol of the cold war division of Europe, came down and Germans celebrated on its ruins the reunification with their cousins on the other side.

Kohl had little to do with these stunning developments. Propelled by events, though, he took the initiative. His somewhat dull personality proved useful in establishing good relations with world leaders: he was the personification of a Germany that was too interested in local cuisine and a quiet life in the provinces to threaten Europe ever again. He became the “chancellor of unity,” a major figure in the history books with a legacy even his later entanglement in a corruption scandal could not blemish.

Ironically, then, the type of person the romantics would champion as a genius, Tito, has left no legacy. Not only does communism no longer exist; Yugoslavia has gone too. Meanwhile, a nonentity interested in little beyond maintaining power left a united Germany within a still relatively united Europe.

Tito and Kohl are only two of the twelve leaders Kershaw explores. He begins with Vladimir Lenin, Benito Mussolini, Adolf Hitler and Joseph Stalin, then shifts to Winston Churchill, Charles de Gaulle, and Konrad Adenauer before exploring the lives of Francisco Franco, Margaret Thatcher and Mikhail Gorbachev.

Each chapter is informed by the latest historiography and provides a sure-footed and balanced interpretation. Anybody who wants a quick, readable and well-informed introduction to the life and legacy of any of Kershaw’s twelve protagonists can reach for Personality and Power. Anybody who wants a well-constructed political history of Europe in the twentieth century can read the book cover to cover, as Kershaw skilfully links his narratives with a thread of themes and findings.

As a history of Europe, this is “history from above,” the kind of history social and cultural historians have rebelled against since the 1960s. These critics have condemned the writing of history as a chronicle of the actions of “pale males” in positions of power. Is Kershaw suggesting we resume ignoring women, people of colour, and common folk? No, he is not. His focus is certainly on those in power, and most of his case studies are of men. And all of them would be regarded as “white.”

But this is not a book about “great men who make history.” Kershaw is dismissive of the entire idea of “greatness,” an analytically vacuous and politically dubious concept. The reason most of his actors are male and white is because, in twentieth-century Europe, Margaret Thatcher was one of very few women who made it to the top of a country’s power structure, and only recently could people of colour make political careers in that part of the world.

Moreover, Kershaw’s analysis is rooted in a deeply understood social and cultural history of Europe. He explores the lives of leaders who emerged from and remained embedded in the societies they led. This history of (not so) great men thus combines social and political history in a genre Kershaw helped shape with his pioneering two-volume study of Hitler, published in 1998 and 2000.

Some of the social history that shapes Personality and Power is couched in somewhat old-fashioned language, particularly the hazy concept of “modernisation,” a shorthand for all those larger social forces beyond the control of any one individual. Lenin’s family, we learn, supported “modernising reforms that would make Russia more like the more enlightened societies of western Europe.” Did they mean the same thing as Lenin’s successors, who fought over “the question of how quickly the Soviet Union should modernise”? Or Adenauer, who as lord mayor of Cologne during the Weimar years “introduced modernising improvements to the amenities of Cologne”?

In 1970s Britain, meanwhile, “the spread of global modernisation” meant that other countries had caught up with Britain’s level of development, leading to a perception of decline. In the Soviet Union “the economy had to be modernised,” a fate that also befell “German conservatism” under Kohl.

What does any of this mean? It’s clear enough what “technological modernisation” entails — the embrace of newer and better cars, tanks, can openers and telephones. But what is political, social or cultural modernisation? Here the word simply stands for “change,” often with the implicit meaning of “change for the better.”

“Modernisation theory,” once popular among non-Marxist social scientists and historians, was a way to talk about directed change without having to embrace Marxian principles. But the premise of this framework has undergone rather severe critique since the 1970s and it’s somewhat baffling to find it in the writings of a historian as sophisticated as Kershaw.

The absurdity of the concept can be illustrated by applying it to recent political developments. Has Donald Trump “modernised” US politics, for example? His popularity was founded on his status as a TV celebrity — “modern,” no doubt — and his campaigning and even governing (if that is the right word) relied heavily on Twitter — also very “modern.” Hence, should we call him a “moderniser”? Or was his undermining of democratic governance and even the very concept of truth a “de-modernisation”?

The other somewhat old-fashioned aspect of this book is its Eurocentrism. This is a history of personality and power in twentieth-century Europe rather than the wider world. This constraint is regrettable because readers would have benefited if Kershaw had more widely applied his judgements and ability to carefully synthesise the historiography. A chapter on Mao, for example, would have been enlightening, as would one on Indira Gandhi. This would also have made the book more useful for the undergraduate classroom, as political history today is more likely to be taught in a world-historical frame than a European one.

What, then, can we “learn” from this history? Kershaw tries to distil his conclusions into a series of seven propositions. They appear a bit clumsy, a somewhat pedestrian form of social science, and stand in sharp contrast to the sure-footed and well-written interpretations of the twelve individuals.

More powerful is his own personal preference, stated early in the book: “I would be happy to avoid ‘charismatic’ personalities altogether in favour of leaders who, if less colourful, can offer competent, effective governance based on collective deliberation and well-founded, rational decisions aimed at improving the lives of all citizens.” But, as his book shows, circumstance can throw such leaders into situations where they will have to act in less deliberative, quasi-dictatorial ways. And it is in these circumstances that their personal qualities will matter most. Hence, we should all worry about those who lead us.

Mark Edele is Hansen Professor in History and Deputy Dean in the Faculty of Arts at the University of Melbourne. He is the editor, with Rebecca Friedman, of the book series Elements in Soviet and Post-Soviet History. He is currently working on a book on the historical origins of Russia’s war against Ukraine.