Sylvia Lawson reviews Rocking the Foundations, The 50-Year Argument and The Land Between 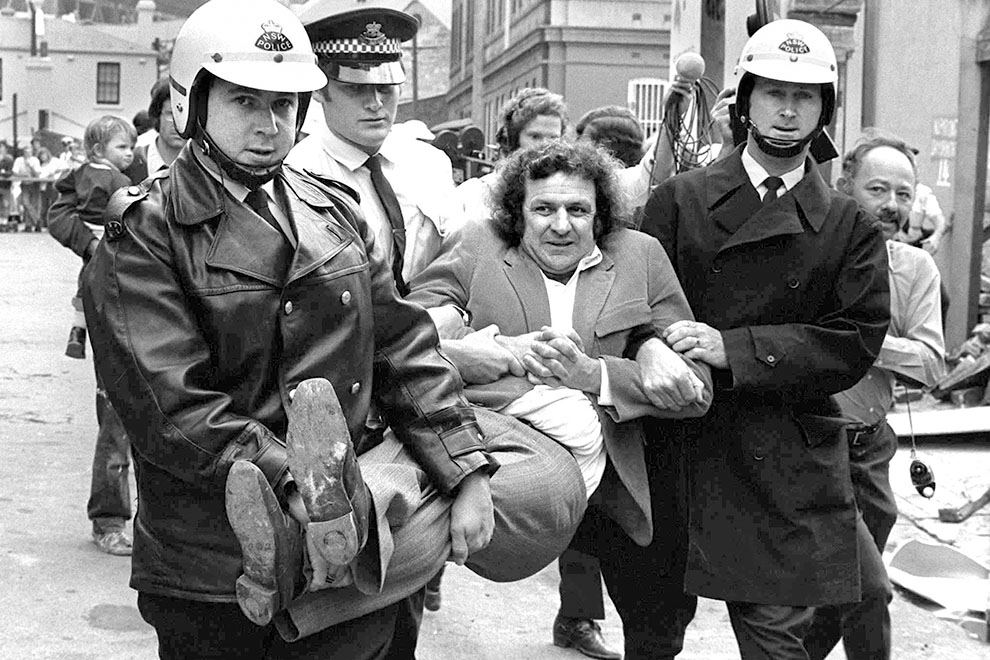 The crossing points of film and history are exciting places to stand. They are multiple intersections: there is the historical moment in which the film was made; the history represented; the history being lived by the watching audience; and perhaps also the histories they’re remembering as they watch. Those might include memories of the first time this film was seen, and provoke reflection on the gulf of time and sensibility between two viewings; it could be a very big one. Pat Fiske’s Rocking the Foundations, an eighty-five-minute documentary on the life and times in Sydney of the Builders Labourers Federation, or BLF, 1940–75, is now almost thirty years old. A recent screening was part of the excellent Antenna Documentary Festival, a thriving annual event (though still confined to Sydney).

The session was presented as a well-deserved tribute to Pat Fiske, producer, director, writer, long-term activist; and, for the record, a one-time builder’s labourer, in that brief day of milling liberationist action. A woman could be seen shouldering a plank and wielding a shovel on a construction site, as she could be seen campaigning for election — or, in this film’s helter-skelter action sequences, helping to occupy the threatened sites in The Rocks or on Victoria Street, Kings Cross, and being forcibly carted off by the cops; she could run a residents’ action newsletter and be disappeared and killed for it, as Juanita Nielsen was, and live on in this film’s capacious memory chest. Here women from the nicest possible suburbs are seen discovering their own powers of resistance; here Betty and Kath from Hunters Hill appear, middle-class, middle-aged and modestly spoken, to tell us that in their struggle to save Kellys Bush, their forested patch on a northern arm of the harbour, they wrote to some thirty organisations for help; only the BLF wrote back.

Kellys Bush is still there. The black bans became green bans, and much of Sydney was rescued. Then along the way, the BLF met its enemies among the master builders and developers; the venal, old-style union bosses; and the bean counters and punishers of Robert Askin’s state government. Those forces won, in that the BLF was deregistered, and its most vocal members became reluctant but active parts of local government. But, the film asks at the end, was it a defeat? In many senses yes, an honourable defeat for that time, but there were undoubted gains: for one thing at least, in the

continuing tradition of resident action, and the wider understanding that communal force can be exerted for the public good. What was most centrally at stake for the BLs in the early 1970s was the scope for low- and middle-income people to go on living near the city and in it.

Rocking the Foundations first emerged two years into the time of Hawke’s Labor government, a time when we could believe that the gains won by the BLF were endorsed in the world at large. The film is a miracle of orchestration, with images from numerous archives linked to 1980s footage shot by Fabio Cavadini and Martha Ansara, in a great work of editing by Fiske, Jim Stevens and Stewart Young, with the dancing energy and an edge of sweetness in Davood Tabrizi’s music. The shovels and jackhammers and giant cranes do their work at close quarters; the sheer brutality in the destruction of the old and beautiful makes its impact — you could weep for the Capitol Theatre of once-upon-a-time. We see the high-rise blocks going up, with the windy canyons between them: someone’s relentless idea of modernity.

The film is made of faces and ways of speaking, like those of the stalwart Nita McCrae and her cohort in the battle for The Rocks; Bob Pringle, Joe Owens, Janne Reed, Bud Cook, along with Jack Mundey, still black-haired and eloquent — they become people we know, and now can meet again. This union’s demands were for basic rights only grudgingly recognised, if at all, before then: decent pay and conditions; occupational health and safety; recognition of skills and skill development in fast-changing conditions of construction. Beyond all of that, the BLs claimed their right to active concern for the wider social world, sharing in the massed opposition to the Vietnam war and the marches for Aboriginal land rights, insisting that the liveable city should remain real and imaginable.

When such a film returns, the yield is renewed knowledge of a lively inheritance, of struggles worth remembering and reviving. Seen again on the big screen in the week of Gough Whitlam’s death, its impact connects with his due in the headlines: their story, his story, have to do with the largest issues of justice. In such a week, it was rather grimly satisfying to know that Rocking the Foundations continues in constant demand from its distributor, Ronin Films. Coming from the period of the so-called Australian film renaissance, it’s worth the whole stack of those genteel, conformist costume dramas that made up the prestigious art-film list. Documentary? Just call it cinema.

Antenna also offered, among much else, a chance to look again at The 50-Year Argument, shown earlier at the Melbourne film festival. This is an affectionate view of the New York Review of Books from its founding in 1963, co-directed by Martin Scorsese and David Tedeschi. The journal’s beginning was incitement: Elizabeth Hardwick wrote an article denouncing the blandness of most reviewing, asking for serious, longer-form attention to the consideration of books. This was taken up by Jason Epstein of Random House; he, his wife Barbara, Robert Lowell, Hardwick and Robert Silvers together founded the NYRB, in the wild belief that they could publish all they wanted so long as they could pay the printer. The film tells some very good stories, and gives us the milieu; this has been the heart of metropolitan intellectual life, its disagreements circling around a liberal consensus; work on politics, science, art, religion, social struggles, feminism – nothing has been alien. We get a lot of the irreplaceable Gore Vidal as both player and commentator; and there’s a lively grab from Town Bloody Hall and Germaine Greer’s famous dialogue with Norman Mailer, with interpolations from Susan Sontag. The benign central figure, Silvers, is seen getting older, working obsessively on and on, in a giant cavern made of books, endless haystacks of them. (One possible response from any writer watching this is to think: how can you possibly want to make one more?)

As film about print, this one hasn’t quite the edge of Andrew Rossi’s Page One (2011), on the New York Times and its survival. I’d have liked to know more about Barbara Epstein (1928–06), and about important changes of the NYRB’s collective editorial mind. Some readers believe they have noted genuine shifts in the coverage over time – on, for example, the Middle East; against the background of strong pro-Israel belief over the decades, the steadily dawning understanding that the Palestinians do have a case. That said, The 50-Year Argument matters as an eloquent affirmation of a city’s and a whole society’s intellectual life, engaged, working and active in a marketplace, outside academia, but extending indefinitely the understandings won within it. And not least, defying all the odds: this is a work of print on paper, surviving by virtue of quality and substance.

Documentary was once taken to be primarily information, instruction for citizens (and guaranteed boredom for schoolkids). Over the past half-century it has burgeoned in ways that make the single term questionable; we’re talking of film essays, film polemics, film argument and film history, of cinematic exploration along endlessly various tracks. Antenna offered a high-level reconnaissance of recent international production; from all of it, if there’s one film you’d want all Australia to see and take on board, it would have to be David Fedele’s The Land Between. And that, as it happens, seems to be a film the gatekeepers would rather you didn’t see.

It’s a film about refugees, desperation, homelessness and exclusion. A few hundred migrants from sub-Saharan Africa are found camping in a mountain forest area of northern Morocco; many have fled from wartorn and impoverished parts of Mali, some are from Cameroon. They’re not far from the Spanish coastal enclave of Melilla, separated by a well-guarded triple wall strung with barbed wire. The refugees we meet are determined to breach the wall and somehow get from there into Europe. (I had to go to the atlas; I didn’t know Melilla was there.) In the forest, the wanderers find food in garbage heaps; they tend fires; we watch them improvising shelters from sheets of plastic and making floors from cardboard. They pray aloud together and sing like an opera chorus, and they care for the kids (who play around happily, and look amazingly well). They tell their stories freely to the camera, all affirming an insistent belief in a God who is somehow, somewhere guiding them, and a completely unfounded certainty that Europe will in time become a home. We learn that many who have scaled the walls and reached Melilla have been sent back, only to be beaten, abused and hounded by the Moroccan authorities. Like the “boat people” struggling towards that Australia they have believed in, these too are punished for their desperation, and punished for sustaining their hope.

Out of their talk, “Europe” figures as a paradise, tantalisingly close and reachable – except that we know it isn’t. The characters who emerge most strongly are the vocal, determined Yacou Traore, and Aicha, a valiant young mother of four who sees her life as an ongoing fight for her children. She saw her husband tortured to death in Mali; the children are both her purpose and her recovery. There is no clear resolution for these or their friends; the audience must take in and live with the facts of their endurance. The last news of Aicha is that she and the children are in a place of immigration detention, a place which sounds horribly like Nauru or Manus.

David Fedele is an Australian, working independently from London. He made several return visits to the community; his extraordinary film took some years to make. It was judged the best feature-length documentary at the FIFE (International Environmental Film Festival, Paris) for 2014, and has won three other awards in festivals in Naples, in Lampedusa (that point of entry for so many refugees, and the place associated with so many drownings), and in Rome at the Festival del Terre.

Four international prizes, however, aren’t enough to get the film on to Australian TV. Both the ABC and SBS have rejected it, sight unseen – they declined preview DVDs from the distributor. There’s no money for a theatrical release. Perhaps NITV will consider it, and Maori TV in New Zealand seems to be interested. I’d like to chain our immigration authorities to their seats and make them watch it – twice.

Unlike other nationally-based programs, the Palestinian Film Festival has no sponsorship. This year it is running in six sessions over next weekend (6–9 November) in Sydney, and five each in Canberra (7–9 November) and Melbourne (14–16 November). The Sydney program offers another chance to look at Hany Abu-Assad's splendid Omar, one of the best films of the year, which has been on release in Melbourne.

Meanwhile, like Antenna, the Canberra International Film Festival thrives; there’s still a week of it to go. Not to be missed: a great afternoon of documentary this Saturday, with Particle Fever (that’s the one on the Large Hadron Collider, packed out at earlier film festivals by spellbound non-science-minded audiences) and China’s 3 Dreams, highly recommended. •

Bringing the world back home

The thirtieth anniversary of SBS’s Dateline is a chance to consider some often-unreported truths, writes Jane Goodall 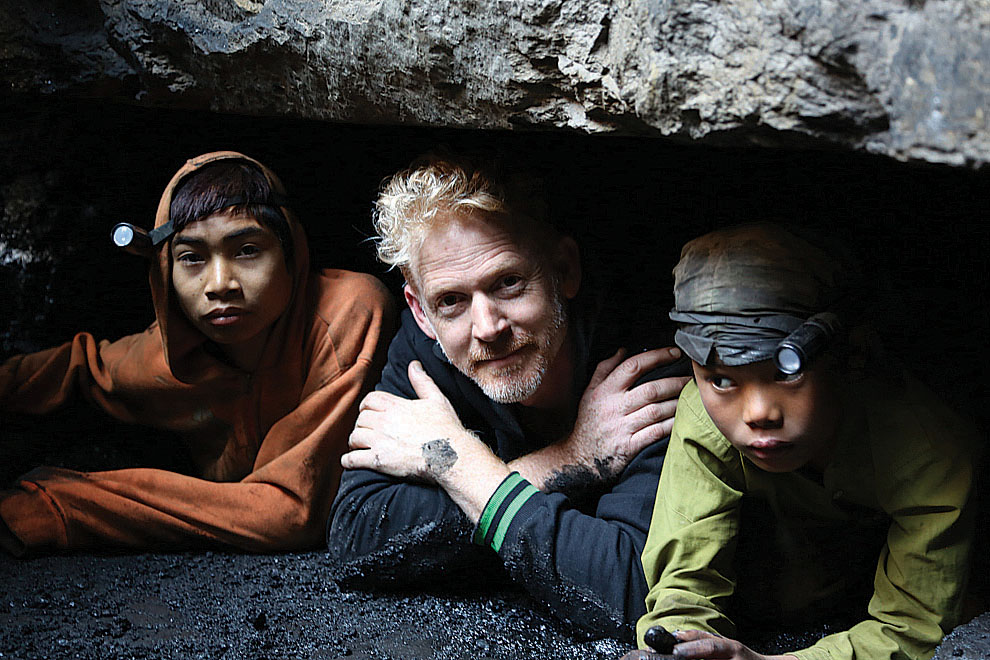