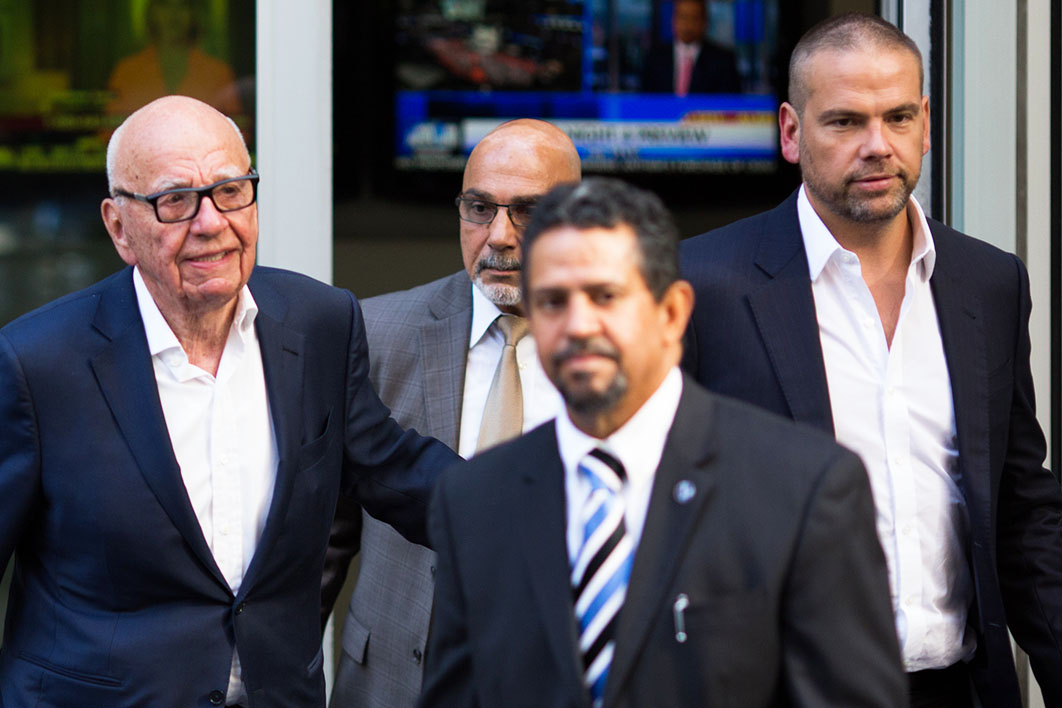 There was a pivotal moment in Lachlan Murdoch’s life. It was 2005, he had been with News Corp for eleven years, and he had been appointed deputy chief operating officer, number three in the company hierarchy. More importantly, he was heir presumptive to the News empire.

But he was troubled. His direct boss, Peter Chernin, apparently believed he was “callow and insubstantial” and was undermining him. Chernin had sided with the controversial Fox executive Roger Ailes, who was particularly scathing of Lachlan’s control of Fox Broadcasting. Cruellest of all, Ailes had labelled him “un-Murdoch like.”

As Paddy Manning recounts in The Successor, his new biography of Lachlan, the crunch came when Lachlan blocked a plan to hand over a primetime slot on Fox to one of Ailes’s friends and then vetoed Ailes’s plan for an expensive series called Crime Line. Lachlan said he was cutting costs but Ailes wasn’t having it. He went over Lachlan’s head to Rupert Murdoch, who told him, “Do the show, don’t listen to Lachlan.”

Never mind that Ailes was later dismissed for sexual misconduct, or that Lachlan’s father would describe his backing of Ailes at that moment as “one of the worst decisions of my life.” No, Lachlan had had enough. Not even mentors like News Australia boss John Hartigan could convince him to stay. Within hours he had bundled his young family onto a private jet and flown out of New York, heading for Sydney.

Author Manning isn’t responsible for all the expectations I brought to my reading of his book. For a start, he picked a vital but underdone subject in Lachlan Murdoch, so he needed to deal with a bunch of questions about what sort of media mogul Lachlan is — and will become after his father departs the scene. But I was doubly demanding because the book was published not long after he launched his curious defamation writ against Crikey. I needed Manning to help me understand why Lachlan would be so affected by the comments of a small Australian news site when large publications in the United States were making similar allegations.

To be fair, Manning’s narrative of Lachlan’s life ends just before Crikey republished its article alleging the Murdochs were “unindicted co-conspirators” in the uprising in Washington on 6 January 2021. But The Successor nevertheless recounts much of the unedifying behaviour of Fox News in the lead-up to 6 January and attempts to explain what, if anything, Lachlan was doing about it.

By then Lachlan had rejoined the company. During his long sabbatical in Australia some of the investments made by his private company, Illyria, had spectacularly failed, but others had hit the jackpot and made him a billionaire in his own right. More fortuitously, he had avoided the British hacking scandal that had tarnished the image of his younger brother James, who was now on the outer partly because he could no longer abide the company’s editorial direction.

So, by early 2021, a decade and a half after his clash with Ailes, Lachlan was seemingly unassailable. He was co-chairman of News, and executive chairman and chief executive of the Fox arm of the empire, which had been spun off from News in 2018 and was home to Fox Sport, Fox Entertainment and the Fox News juggernaut. But, as Manning suggests, that didn’t necessarily mean he was in charge. For a start, the spectre of his father loomed over big decisions and, while Roger Ailes had gone, other aggressive company lieutenants wielded their own power and sought to undermine him.

And anyway, what did it mean to be in charge of the most politically provocative arm of the family’s empire at such a fraught moment in history? How much of the rumour-mongering and disinformation spewing out of Fox during and after Trump’s presidency could be attributed to his management? Did that coverage reflect Lachlan’s own political beliefs or had he accepted that his role, whatever his views, was not to mess with the formula that had made Fox so profitable?

Manning’s subject opted not to talk to him, so he didn’t get to ask how Lachlan reconciles the damage Fox is doing to the fabric of American society with his view that Australia is a nicer place to live and raise children. Surely he can see that much of what makes Australia good is the subject of Fox’s scorn? Without such an interview, Manning was obliged to curate all the snippets of information on the public record and add whatever insights he could glean by interviewing others. The result is a highly readable and very useful distillation, but the book generally leaves it up to readers to draw their own conclusions about Lachlan’s motivations.

So, what is the relationship between Fox’s ultra-right-wing coverage and Lachlan’s own politics? For years, many Murdoch watchers believed Lachlan’s brother James was the right-wing sibling — at least since he described the BBC as authoritarian during the prestigious MacTaggart lecture in Edinburgh in 2009 and argued that “the only reliable, durable and perpetual guarantor of independence was profit.” Since then James has walked away from an executive role at News after speaking up against the company’s support for Trump and its denigration of climate science.

Three years later sister Elizabeth gave the same lecture and denounced James’s prioritising of profit. She had long ago quit as head of News Corp’s British satellite TV network BSkyB to form her own production company, Shine. By 2012, says Manning, she was “almost estranged from her father, waging a war for integrity inside the company.”

This seems to leave Lachlan as the most conservative — and we’re not talking in a patrician Grand Old Party sense. He’s got some out-there views. For example, Manning quotes former Australian editor-in-chief Chris Mitchell’s recollection of Lachlan arguing for the death penalty for Australian drug smugglers Andrew Chan and Myuran Sukumaran. He’s to the right on gun laws and was a generous backer of Senate minority leader Mitch McConnell, who has made it his life’s work to stack the US Supreme Court with socially conservative judges.

But Lachlan sees himself as an independent thinker, and believes this is an essential quality for a person running a media organisation. He says he is conservative on economic policy but more liberal on social matters. He told journalist Andrew Ross Sorkin in 2018 that he didn’t “fit neatly into a left–right, Republican–Democrat bucket.”

He also revealed what appeared to be contrarian leanings, putting him in company with many on the reactionary right of US politics, where people simply won’t be told how to live their lives by big government, big tech or the liberal media. Lachlan told Sorkin, “What I find is that when people tell me to think a certain way, I’m more inclined to think a different way, or certainly examine, ‘Why are they telling me that?’”

So what if Lachlan is right-wing and has a reactionary or contrarian bent? That doesn’t necessarily mean he led the programming of Fox in the lead-up to 6 January, does it? Manning suggests he’s more interested in making money by “leveraging brands” or “building verticals” for new business ventures like gambling. He’s not so interested in prosecuting political causes like his often-activist father. But that hardly absolves him of responsibility for the appalling content on Fox and for the rantings of some of the network’s presenters.

Take Fox host Tucker Carlson, for example. His primetime program has been described as “the most racist show in the history of cable news.” He race-baits and targets vulnerable people, and promotes the crazy “great replacement theory,” which claims global elites are working to replace whites by encouraging non-white immigration. The theory surfaced in the United States at the 2017 Unite the Right rally in Charlottesville, where neo-Nazis chanted “Jews will not replace us.” It motivated terrorists who targeted Jews, Muslims and Hispanics respectively in mass shootings in Pittsburgh, Christchurch and El Paso. Carlson has also defended the anti-Semitic QAnon conspiracy and denied white supremacy is a problem in the United States.

Where was Lachlan while Carlson’s deranged hatred was going to air? According to the Anti-Defamation League’s Jonathan Greenblatt, the Murdochs — father and son — gave up trying to rein in Carlson and forgot they were in charge. “Someone needs to remind the Murdochs they pay Tucker,” said Greenblatt. “Tucker is their employee. They’re allowed to sanction him.”

On other occasions, though, Lachlan did speak up. After George Floyd was murdered by a Minneapolis police officer he sent a memo that urged Fox staff to “listen closely to the voices of peaceful protest and fundamentally understand that Black Lives matter.” It was a plea to an organisation that had been antagonistic to BLM since 2014, when host Megyn Kelly claimed eighteen-year-old Michael Brown, the victim of a police shooting, was in fact the aggressor. Another Fox presenter likened the movement to the Ku Klux Klan. Such was the authority of Lachlan’s memo that Tucker Carlson labelled BLM a “terror organisation” a few days later.

When the independent media advocacy group Media Matters awarded Lachlan the title of Misinformer of the Year in 2018, it said it didn’t know whether he was idly standing by in the face of Fox misinformation or encouraging the network to shift its position. Either way, it concluded, he was “gaslighting America about the damage Fox News is doing to the country.” As Manning points out, Lachlan saw this kind of criticism as left-wing bullying that only tended to strengthen his resolve to stand by the network.

A picture emerges of a defiant, conservative contrarian who reacts badly to criticism from the left. And we’re reminded elsewhere in The Successor that Lachlan has sued before and has a “talent for vengeance.” If this picture is accurate, then Crikey’s article would have indeed been triggering, even when bigger publications in the United States had made similar observations in even more strident ways.

But perhaps there’s another reason why Lachlan opted to sue, and it’s got to do with the fact that the Crikey piece was published in Australia. I’m not talking about our defamation laws being more friendly to plaintiffs, though that is undoubtedly true. No, the book makes the point that Lachlan, despite his distinct American accent, very much identifies as Australian. He prefers living here. He chose to return to Australia during the pandemic and ran Fox from Sydney by working nightshifts, albeit in the comfort of his sprawling Bellevue Hill mansion.

Manning reminds us that Lachlan voted a portion of his News shares against listing the company on the US stock market because he had a sentimental attachment to the company’s roots in Adelaide. He clearly likes the values and safety of this country, and much else besides.

Could this mean he actually cares what people think of him here as well, enough to sue a media company that dares suggest that the business he runs is opposed to such values?

It’s just another question to put on the ever-growing list. After reading Manning’s important and timely book, I may not have all the answers, but I’m grateful for this valuable addition to our understanding of someone we should all know more about. •

Andrew Dodd is the director of the Centre for Advancing Journalism at the University of Melbourne. He is the co-editor of Upheaval: Disrupted Lives in Journalism.