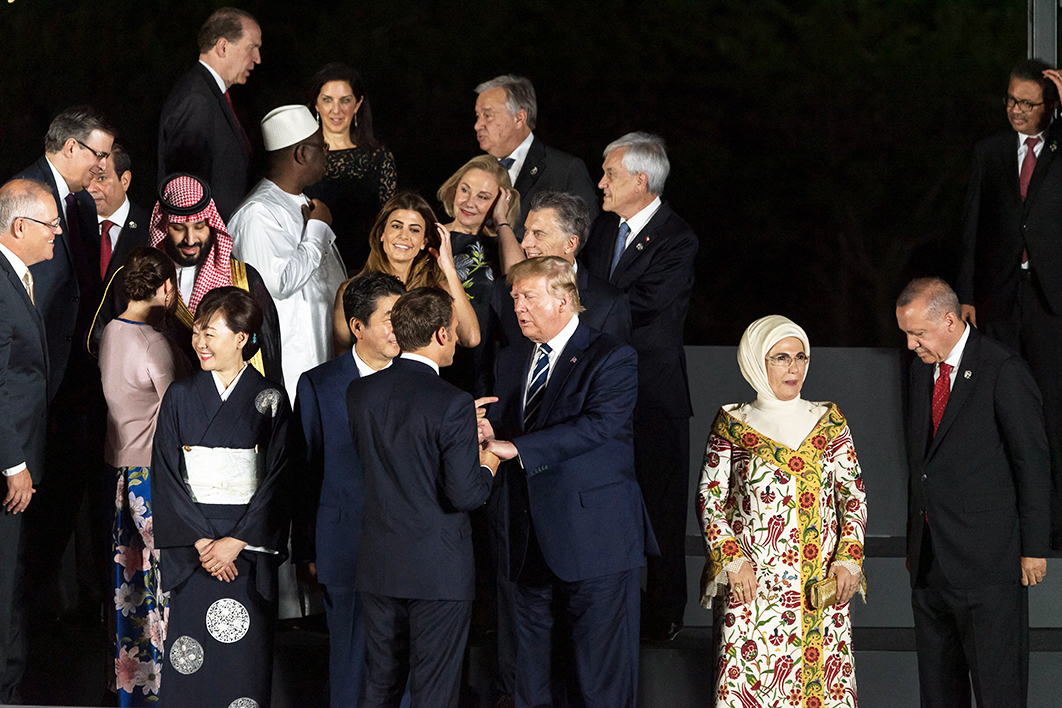 “Choose your words carefully,” the writer Jim George once warned, “for they reveal your inner character.” Few words are chosen more carefully than those in a communiqué from the leaders of the G20. Officials and politicians spend thousands of hours negotiating each sentence, word and semi-colon. The words they include reveal a lot about what they think; the ones they leave out reveal even more.

The ten most-used words in the leaders’ communiqué following this weekend’s G20 summit in Japan were sustainable, development, growth, energy, women, health, financial, inclusive, infrastructure and technologies. It would sound like a commendable outcome if not for one glaring omission. Despite the world facing the most dangerous trade war since the Great Depression, the word “trade” didn’t even make the top twenty. And that wasn’t just an oversight: it reflects Japan’s low-ambition strategy to appease US president Donald Trump.

In 2018, when Argentina was host, G20 leaders made history by committing to reform the World Trade Organization and the global trading rules. Throughout 2019, a coalition of countries, led by Indonesia and supported by Australia and others, pushed for an ambitious implementation of that commitment.

Delivering WTO reform could not have been made easier for Japan, and it would have addressed the root causes of the trade war. The WTO and the global trading rules are horribly out of date. They are largely silent on state-owned enterprises, subsidies, competition policies, technology, data, services, currencies, behind-the-border restrictions, and a swathe of other tension-fuelling measures. Reforming these rules would not only have tackled the biggest challenge facing the world economy, it would also have reinvigorated the G20, which is desperate for a win, and put the brakes on the world’s dangerous slide into protectionism and unilateralism.

Instead, Japan — a country with powerful national interests in the global trading system — decided to continue its charm offensive with President Trump, hoping that gifts of gold-plated golf clubs will stop him from imposing tariffs on its auto industry. The communiqué reiterated the importance of WTO reform but, despite pleas from many countries, didn’t include any plan or framework on how to deliver it. Worse still, previously agreed reforms like the recently created Global Forum on Steel Excess Capacity, opposed by China, are back in contention.

The agreement between Trump and China’s Xi Jinping to resume trade talks is of little comfort. The previous ceasefire — following last year’s summit — was only temporary, and nothing was done on the weekend to deal with existing tariffs and restrictions between the two countries. While it’s better that they are talking than not, the economics and politics suggest that the trade war will continue for some time.

On the economics, Trump says he wants a smaller US trade deficit. But basic economics tells us the deficit has more to do with American companies, households and government borrowing money abroad to finance investment than it does with flows of goods and services. On the politics, it probably suits Trump to keep the trade war going during next year’s presidential election campaign, especially as last week’s Democratic Party debates suggest that an anti-trade, anti-China agenda is bipartisan.

Cooperation was equally dismal on climate change. Relegated to the end of the communiqué, the paragraph on climate change was followed by a paragraph stating that the Paris Agreement disadvantages American workers and taxpayers. Trump is reported to have lobbied the presidents of Turkey and Brazil to withdraw from the Paris Agreement. Only after the intervention of French president Emmanuel Macron did they hold the line.

So what was the focus of the weekend’s summit? One of the (many) words that appeared in the communiqué more than “trade” was “reaffirm.” Japan’s G20 presidency has been all about reaffirming existing G20 commitments — on multinational tax avoidance, financial regulation, financial inclusion, infrastructure and the need to reduce global current account imbalances — rather than doing much new.

Japan did, however, give a new spin to some of these issues. The focus on infrastructure, for example, was on “quality infrastructure,” meaning countries should invest in infrastructure that lasts rather than having to rebuild it in a few years’ time. This annoyed China and some developing economies which, by way of analogy, argue that your first lounge suite should come from Ikea rather than David Jones.

Japan also focused on the digital economy. Although the communiqué lacks any firm commitments on data flows across borders, it could perhaps start useful discussions about how to tackle the patchwork of regulations developing across the world as governments try to balance privacy and security with the opportunities opened up by the digital economy.

Some might argue Japan was right to avoid adding too much to an already unmanageable G20 agenda. With global cooperation a shadow of its former self, though, the priority is to find areas of common ground.

This is why Scott Morrison’s performance at the G20 was particularly strong. Not only did Australia fight for a strong outcome on WTO reform, it also led a broadly supported — and, unless you’re Mark Zuckerberg, costless — initiative to put new pressure on social media platforms to stop the spread of violent terrorism online..

But finding areas of common ground is no substitute for meaningful reform, particularly on something as important as the global trading system. It now falls to Saudi Arabia, the G20 host country in 2020, to take up the fight for meaningful trade reform. Will it do better? •

Adam Triggs is the Director of Research at the Asian Bureau of Economic Research at ANU. He was an adviser on the G20 in the Prime Minister’s Department during Australia’s G20 host year.