Prime minister Malcolm Turnbull speaks to journalists at Parliament House after the election of Donald Trump as US president on Wednesday Canberra time. Mick Tsikas/AAP Image 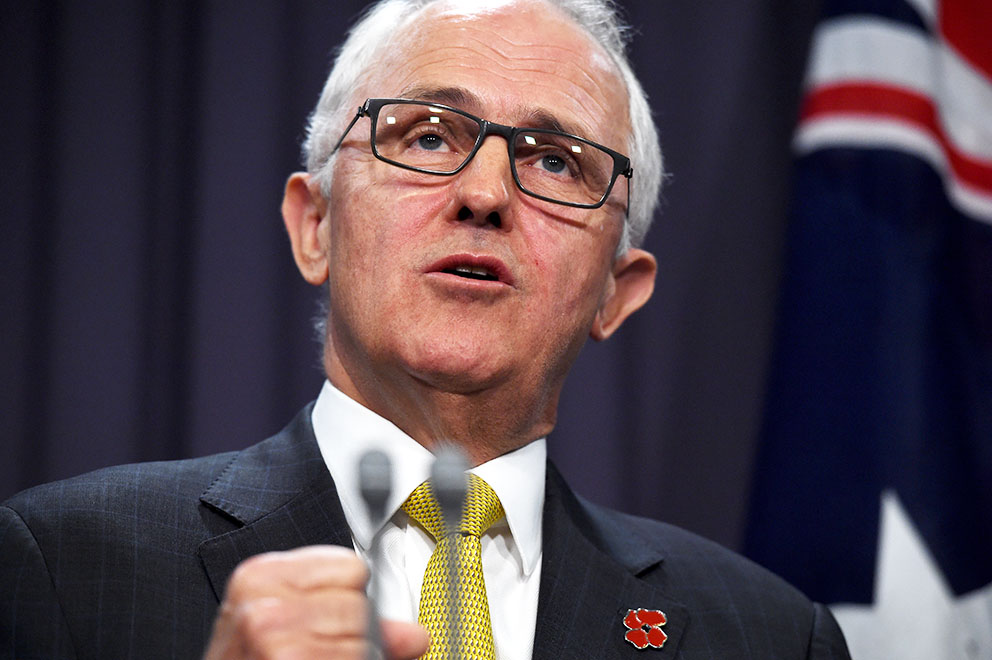 Prime minister Malcolm Turnbull speaks to journalists at Parliament House after the election of Donald Trump as US president on Wednesday Canberra time. Mick Tsikas/AAP Image

Of all the promises made by Donald Trump, it was “make America great again” that struck the loudest chord. It was a slogan general enough and inspirational enough to channel the feelings of the disaffected, the disheartened and the angry.

Trump, with characteristic braggadocio, says he invented it. “That was mine, I came up with it about a year ago and I kept using it and everybody’s now using it, they are all loving it,” he said last year. “I don’t know, I guess I should copyright it, maybe I have copyrighted it.”

It was one of his lesser lies. He is old enough to remember that it was the campaign slogan used by Ronald Reagan to great effect in the 1980 election (which I covered for the Sydney Morning Herald). It helped Reagan to a landslide victory against Jimmy Carter, thereby achieving the relatively rare feat of defeating a first-term president.

Reagan, too, was a showman, though a much better-natured one than Trump. And he ran heavily on an anti-establishment, anti-Washington, anti-politician theme, even though, unlike Trump, he had been a practising politician as governor of California.

But he didn’t win by convincing Americans of his vast knowledge of governing (as evidence of his foreign policy experience, he once cited a meeting with the King of Siam). Rather, he tapped into the same demographic as Trump has – white, working-class Americans in northern and midwestern states, who became known as Reagan Democrats, as well as middle-class white voters who felt, and still feel, under economic pressure.

Where Carter saw complex problems, Reagan had simple solutions not burdened by much supporting evidence – trickle-down economics, for instance, and pouring huge sums into defence programs like Star Wars, both of which blew out the federal deficit. Neither did anything to help Reagan Democrats, just as Trump’s policies are more likely to harm his core supporters than help them.

There has long been a loose association between politics and the truth but, like everything else about his campaign, Trump took it to a new level. According to PolitiFact, 70 per cent of Trump’s statements during the campaign were mostly false, false or “pants on fire false.” Hillary Clinton was a paragon of virtue by comparison, with only 26 per cent in these categories.

That Americans elected Trump regardless doesn’t just reflect a cynical view among voters that politicians always lie. One of the great contradictions today is that there has never been more access to information and there has never been greater ignorance and misunderstanding.

The most basic responsibility of journalists and editors is to check facts and discard those that are wrong. Of course, it is an imperfect process, with many a porkie slipping through as a result of insufficient checking, deadline pressure or the reporting of uncontradicted assertions. But it at least applies a filter to the millions of claims and counterclaims jostling for attention. Or it used to.

People’s trust in traditional media has plumbed new depths, as it has for other institutions. Now they apply a different filter, choosing the media that suit them, feeding their own prejudices and preconceptions and shaping their own realities. Most of the media have adjusted to feed this beast, forsaking rigorous journalism and balance to stake their claim for a segment of the market. The truth, the whole truth and nothing but the truth? Well, it depends: it has become relative.

So-called facts are deployed as weapons in battle. In the process they become casualties of the truth because in a war there is no scope to give ground. Challenging a statement that is wrong becomes part of a conspiracy, turned against the accuser, as in Trump’s mantra against “lying Hillary” and the mainstream media.

A reported 62 per cent of Americans now obtain their news from social media, where real facts come a distant second to assertions that have the most tenuous connection to the truth or none at all. Donald Trump was a leading proponent of the claim that Barack Obama was born overseas. It was preposterous and repeatedly proven to be wrong, but he persisted with it until late in the campaign because people believed it and it played to his advantage.

In Trump’s world of whatever-it-takes politics, there are no boundaries. He was prepared to promise anything that had any appeal and say anything that advanced his cause.

Now that he has been elected president, the optimistic view is that his promises will be as dispensable as the truth. Perhaps he doesn’t really want to lock up Hillary. Banning all Muslims from entering America is impractical, apart from being a bad idea. Ditto deporting illegal immigrants. He seems intent on building a wall along the southern border, but may stop short of going to war with Mexico to force it to pay for it. Former auto and steel workers might like the idea of slapping a 45 per cent tariff on Chinese imports until China threatens to retaliate and set back the world economy by years.

If he breaks all or some of these promises, his strongest supporters will feel betrayed and rightly so. Just possibly, they will let him get away with it if he succeeds in restoring a sense of confidence in Americans, as Reagan did. But he will have fed the relentlessly downward spiral in politics, further eroding trust and reinforcing anti-establishment sentiment. By the time of the next election, many will be looking for another candidate to represent their views.

The promises that Trump seems most likely to keep, like abolishing Obamacare and implementing yet more tax cuts for the rich and big business, are the ones most likely to harm Trump’s core supporters. Obamacare has reduced the number of Americans not covered by health insurance – typically poorer, casual workers – by twenty million, according to the US health department. Tax cuts at the top end will do nothing to reverse the staggering rise in inequality that has seen the living standards of lower- and middle-income earners stagnate or fall over recent decades while those on higher incomes have soared.

Is there a way out of the deadly political spiral of increasing alienation of voters and increasing resort to opportunistic populists? Leadership of the right kind would be a start.

Globalisation and all its ramifications, including free trade and economic restructuring, has often been imposed on voters in developed countries, rather than its benefits being sold to them. In Australia, the support of John Howard’s opposition for financial and labour market deregulation and tariff cuts reduced much of the electoral grief that otherwise would have been visited on the Hawke and Keating governments.

Globalisation has brought increased prosperity, particularly by lifting hundreds of millions out of poverty in developing countries. But it has also left people behind, despite the breezy assumptions in Western countries that displaced workers would move effortlessly to the new growth areas of the economy. Tell that to a migrant textile worker in Australia expected to pick up a job in IT.

This problem is finally being acknowledged, if not yet addressed, at senior levels of the Australian government, in a belated response to a rise in protectionism and of populist politicians like Le Pen, Farage, Hanson and Trump. Martin Parkinson, head of the prime minister’s department, recently highlighted two of the consequences of globalisation: on the one hand, a decline in global income inequality as incomes in poorer countries rose faster than those in wealthier countries and, on the other, a rise in income inequality within countries.

He argued that the first response to rising protectionist pressures should be a reinvigorated structural reform agenda based on open trade and investment policies that lift competitiveness, attract greater investment and allow Australia to capitalise on opportunities in the world economy. In short, a standard contemporary economic prescription.

But he went further: “Rising inequality is not destiny or a necessary consequence of the forces of globalisation. It is a choice made by individual countries. All governments have the policy apparatus at their disposal to build a more economically and socially equitable society that remains internationally competitive.”

While arguing that Australia’s redistributive tax and welfare system already did a better job of this than most other countries, he then advocated measures to better equip the workforce to manage change. “Education and training,” he said, “are important domestic policy levers which Australia and other nations can pull to build growth and support those who are more at risk from unemployment or underemployment during periods of structural change.”

And, as a third response, he said we should support those who, despite their best efforts, could not rapidly reskill or find reasonable paying work and therefore needed income support to sustain a reasonable standard of living.

Conservative forces, including in the Turnbull government, could do well to reflect on this instead of arguing reflexively that social spending always needs to be cut. An investment in retraining, education and income support may pay off not only economically but politically if it mutes the siren call of Trumpism. •

The mystery of Judith Wright 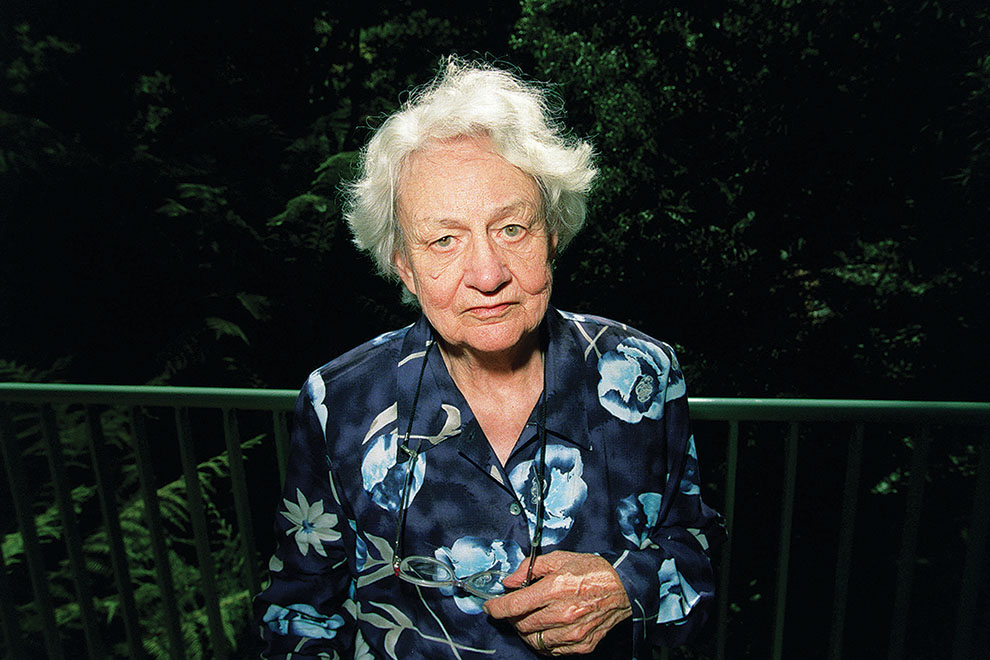