Television | Bridgerton isn’t alone. Period drama is back with a vengeance 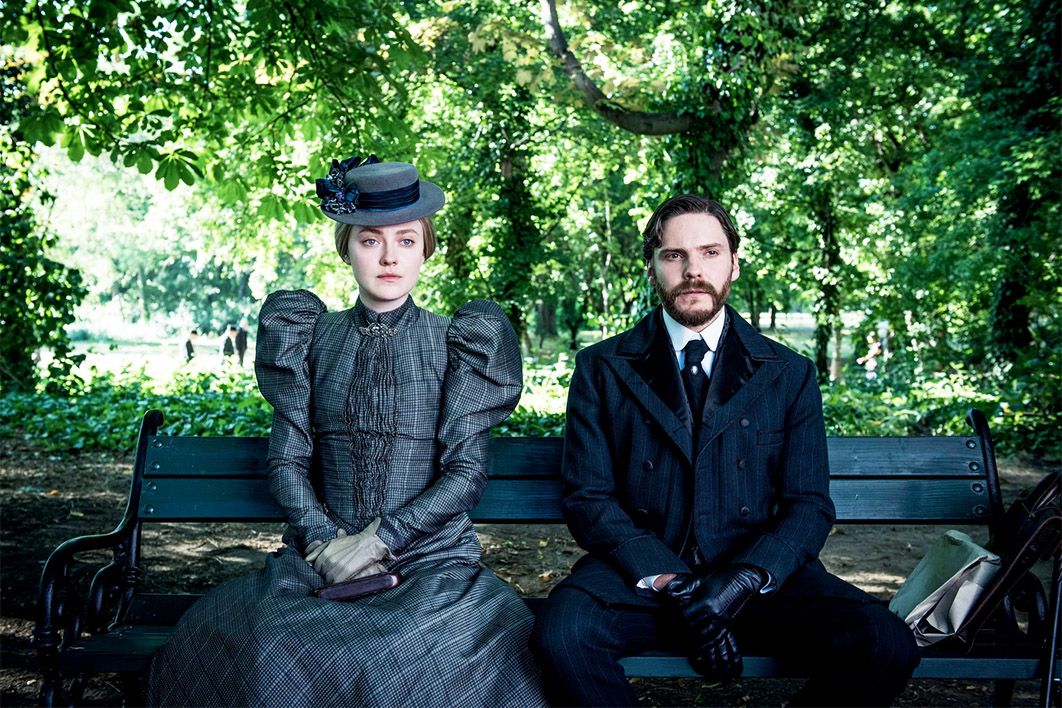 “A visual time machine”: Dakota Fanning and Daniel Brühl in The Alienist.

After a year of social distancing and working from home, the appeal of tracksuits and pyjamas may be waning. Was there really a time when people took two hours to dress for an elegant soiree, the opera, a late party and then, perhaps, discreet assignations in the small hours? A longing to at least imagine such things while eating takeaway on the couch is understandable.

Major television producers were prepared. Over the past few months Netflix has screened a range of extravagant period dramas, fortuitously completed before pandemic restrictions kicked in. The most recent, and most spectacular, is Bridgerton, released just in time for Christmas. American Tonight Show host Jimmy Fallon summed it up: “Everyone in the world watched it and it exploded.” Perhaps viewers weary of the moral squalor of the presidential meltdown were especially in need of escapist romance.

Based on a sequence of novels by American writer Julia Quinn, Bridgerton is, among other things, a historical fantasy about the England of Jane Austen’s Pride and Prejudice. Simon Basset, Duke of Hastings, is the Darcy figure — a single man in possession of a good fortune and surely in want of a wife, yet perversely determined to flout the “universally acknowledged truth” with which Austen famously commences her novel.

Basset’s resolve is put to the test by Daphne Bridgerton, belle of the season, who finds herself the target of some mischief from the news media of the time, in the form of a gossip sheet authored by one Lady Whistledown, whose real identity is spiritedly investigated by Daphne’s sisters. Further troubles arise from the rivalry between the Bridgerton and Featherington households, both of them matriarchal and burdened with too many daughters.

The ingredients seem promising enough, if counterfeit Jane Austen is to your taste. As to the question of why anyone would want to attempt a pseudo version of the classic novel, it certainly creates the opportunity to add missing elements like sex, feminism, royalty and preposterously extravagant costumes, all of which can be amplified to cater to twenty-first-century tastes and preoccupations.

Anachronisms are inevitable, and there are plenty here to concern the people Quinn refers to as “the accuracy police.” A debutante is subjected to the ordeal of tight-lacing, regardless of the fact that Regency gowns had no waistline — as is evident when she appears fully attired in the next scene. The assertive Lady Featherington dresses her daughters in intense yellows and pinks more in tune with the Mary Quant era than the aesthetics of Regency London. Does it matter? The gauge is dramatic coherence rather than historical authenticity, though a certain level of authenticity is required to make the fictional world convincing.

By that measure, with assistance from an army of specialist coaches and advisers, showrunner Chris Van Dusen has largely succeeded. The series hits its stride early on when debutantes are presented to the Queen at Hampton Court. The scale and formality of the courtroom are nicely counterpointed with small moments in which the participants rise, or fail to rise, to the occasion. The Queen presides, slumped on her throne in a bad wig and a gown several decades out of date, but with an eye that misses nothing. Commentary from Lady Whistledown is delivered in voice-over, read by Julie Andrews.

Queen Charlotte is played by Guyanese-British actress Golda Rosheuvel, whose theatrical experience is evident as she manipulates codes of deportment to create unsettling shifts in expectation among the royal watchers. Van Dusen says he was influenced by historical accounts claiming that Charlotte’s Portuguese descent made her Britain’s first mixed-race monarch. This was factored into the producers’ decision to opt for what’s known as colour-blind casting — actors chosen entirely on performance qualities, regardless of ethnicity.

In this case, though, the term is misleading. A high degree of conscious selection has been exercised in deciding which roles to cast with non-white actors, and the racial differences implicitly underscore dynastic rivalries and social tensions. When Daphne Bridgerton (Phoebe Dynevor), a diminutive English rose, clashes with the dark and rakish Basset (Regé-Jean Page) at a dinner party, echoes of Darcy and Elizabeth Bennet are overlaid with more contemporary resonances of cultural difference. The interplay between the two is beautifully judged.

Like the dour Queen Charlotte, though, I found that Bridgerton’s charm palled after a while. I’d no sooner binge-watch this series than eat multiple slices of pavlova. For more grit and realism, the vogue for Freudian crime stories continues elsewhere on Netflix with Freud and season two of The Alienist, and on SBS with Vienna Blood.

All three series are set in the Belle Époque, an era that, besides affording prime opportunities for the costume designer, is rich terrain for gruesome and erotic plotlines. The stories play on the idea of Freudian analysis as a breakthrough form of detective work analogous to that of Sherlock Holmes. Where more recent crime dramas portray the split between the grim urgencies of police work and the everyday world of home and family, these historical evocations explore a larger division as the investigators move between the glittering halls of high society and an underworld where horrors of the most lurid kind are encountered.

As a subgenre of crime, the model depends on balancing these alternative realities effectively. The Belle Époque itself becomes a Freudian expression of the psyche, with the ego as a glamorous presence in the centre, torn between social conventions and dangerous compulsions arising from hidden depths.

The Austrian series Freud gets the balance wrong, plunging hook line and sinker into a morass of traumatic fantasy. It’s not the first attempt to exploit the idea that the young Freud was a dynamic avant-garde figure; David Suchet nailed that interpretation in a 1984 series for the BBC. Here he is portrayed as a psychological adventurer in the grip of a cocaine addiction that afflicts him with terrifying hallucinations. He spends evenings at seances and days at the asylum surrounded by screaming psychotics. As for the plot, I’m afraid it escaped me entirely after the second episode.

Far more cogent is Vienna Blood, an English-language series based on a set of novels by clinical psychologist Frank Tallis. The analyst/detective here is Max Liebermann, an English student of Freud, who associates the pioneering psychoanalyst’s lectures on the unconscious with “a shadow realm the city is determined to hide.” He attaches himself to a police inspector investigating the murder of a young woman who has been holding seances in her apartment. 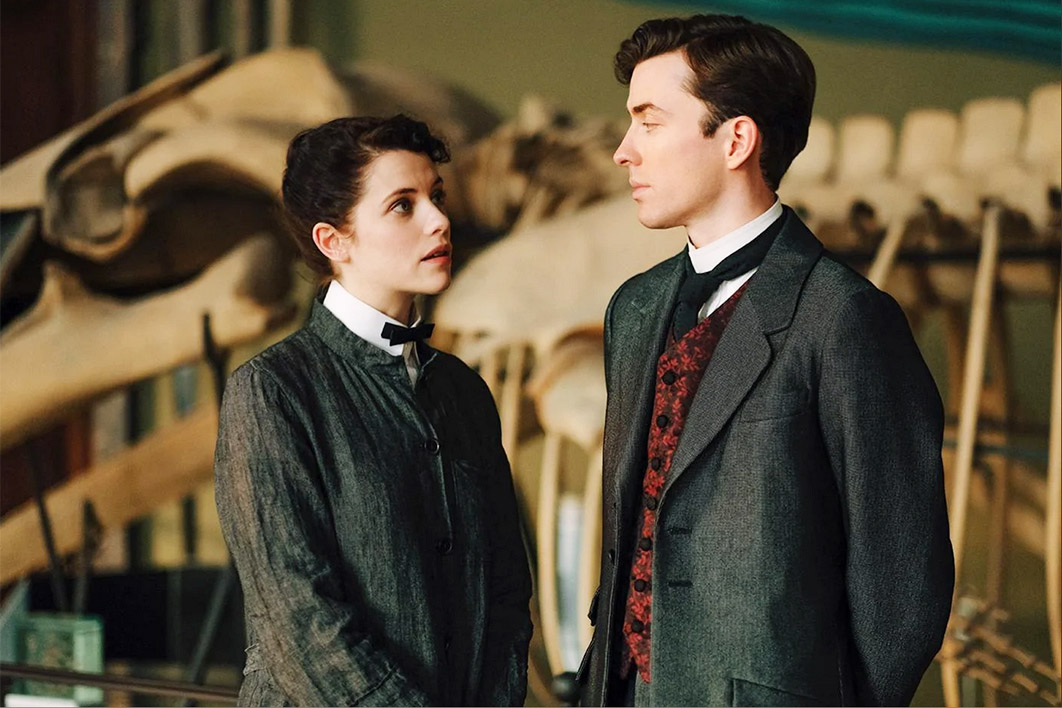 Matthew Beard plays Liebermann as a quietly spoken youth with a natural authority beyond his years. His poise is unshaken by the horrors of the murder scene, the anxieties of his conservative Jewish parents or the remarks of his elegant fiancée Clara (Luise von Finckh), who exercises her own form of challenging insight. Inspector Rheinhardt (Juergen Maurer), initially rankled by Liebermann’s arrogance, comes to see that the assurance is an asset, especially when he himself comes under pressure from his superiors in the police department. They make a good duo — a refreshing change from the Holmes/Watson prototypes, with subtler opportunities for collaborative learning.

One of the secrets of any effective urban crime series is to give the city itself a dominant role, and this series has the advantage of being filmed in Vienna, so that the portrayal of Viennese life in those years extends well beyond generic images. Social events are evoked highly specifically: Liebermann takes Clara to the opening of a Klimt exhibition, to a Mahler concert, and on an afternoon tour of the Natural History Museum. There is genuine historical intelligence in all aspects of the scenography and production design. Everything is done for dramatic cogency, nothing for mere effect.

The same may be said for The Alienist. Caleb Carr, author of the original novels, brought specialist knowledge of military history and foreign affairs to his stories of the underworld in fin de siècle New York, and the television adaptation observes the same stern relationship to facts.

The production team went to great lengths to create what director Jakob Verbruggen describes as “a visual time machine,” making minimal use of CGI. A large budget from TNT/Paramount enabled the construction of extensive replicas of tenement streets in a vast studio backlot in Budapest. Night-time street scenes are shot using ambient light sources — gas lamps, braziers, torches — to sharpen the contrast with luminous interiors where the fashionable world is on display.

While there is some acknowledged indulgence in the opulent range of costumes, they are superbly designed and made. Dakota Fanning as Sara Howard, the first female employee of the New York Police Department, seems to have a new outfit for every scene, each of them stylish enough to warrant a magazine cover. The sight of her pursuing a killer through underground labyrinths in a full-length gown and cropped jacket serves to accentuate the collision of worlds.

But authenticity means more than getting the sets and costumes right. The worst offences in many historical series — including Bridgerton and The Crown — are not in details of setting and circumstance, but in language. Use of anachronistic phrases and vocabulary can signal a failure, or even a stubborn refusal, to observe fundamental differences in social ethos. I noticed almost no lapses of this kind in either season of The Alienist.

Howard as a crusading figure is not seen through the lens of twenty-first-century feminism. Her commitment to establishing an independent detective agency and her involvement in campaigning for women’s legal rights are entirely convincing as phenomena of the times. Fanning’s performance is restrained and austere, but there’s a sense of turbulent emotional life held in check.

The Freudian member of the trio of detectives is Laszlo Kreizler (Daniel Brühl), who is called in at the start of season one by a young Theodore Roosevelt (Brian Geraghty), recently appointed police commissioner, to assist in the investigation of an extravagantly gruesome murder. John Schuyler Moore (Luke Evans), the third member, is a society figure whose work as an illustrator for the New York Times does little to prepare him for the task of sketching imaginatively mutilated corpses.

It’s easy to dismiss historical drama as a form of escapism, centred on glamorous characters in opulent circumstances when real life for most people at these times was nasty, brutish and short. Less judgementally, pre-twentieth-century settings provide opportunities to create a larger sense of story. More mysteries are to be encountered in a world without electric lighting, motorised transport or remote communications, and more radical shifts in human destiny to be experienced in societies with marked social strata. And for viewers in the grip of pandemic doldrums, they can serve as a reminder that the powerful and unpredictable chemistry of social change may soon come back into play. •

Is the Voice already being muted?

As we enter stage two of the co-design process, the government seems already to be shaping the result

Long road: Marcia Langton, a senior adviser to the Indigenous Voice Co-Design Process, arrives at Kirribilli House in Sydney in July 2015 for a meeting with prime minister Tony Abbott and opposition leader Bill Shorten about Aboriginal recognition in the Constitution. Britta Campion/Newspix 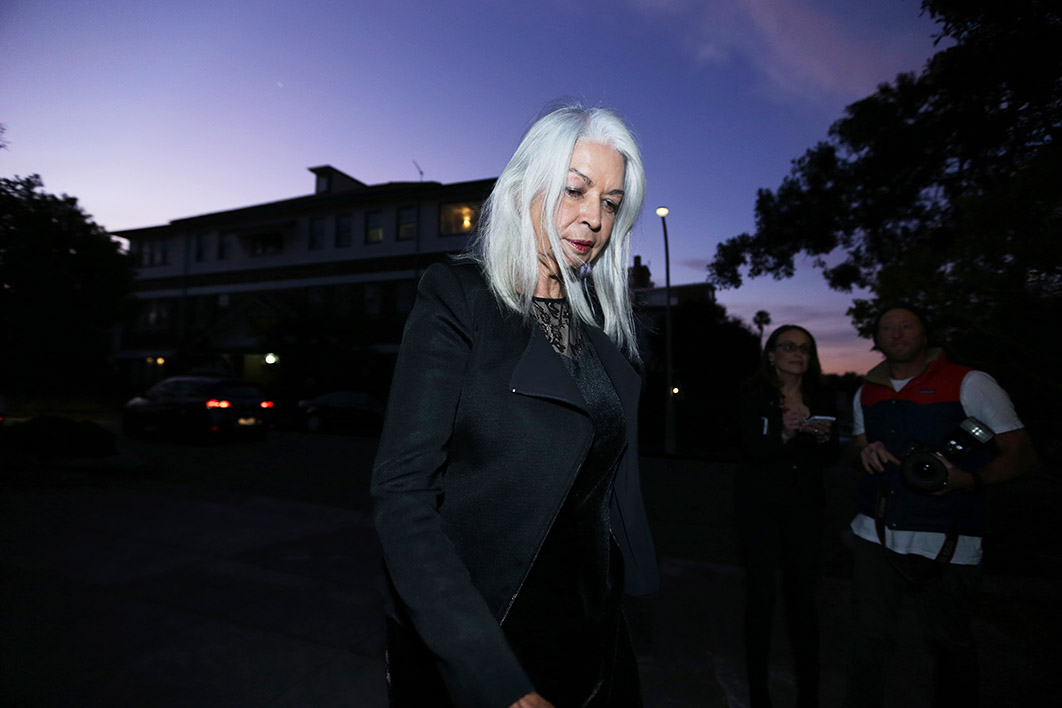 Long road: Marcia Langton, a senior adviser to the Indigenous Voice Co-Design Process, arrives at Kirribilli House in Sydney in July 2015 for a meeting with prime minister Tony Abbott and opposition leader Bill Shorten about Aboriginal recognition in the Constitution. Britta Campion/Newspix