Is Kevin Rudd a supporter or a critic of neo-liberal policy-making? On the evidence of his approach to climate change, it’s hard to know, writes Brian Toohey 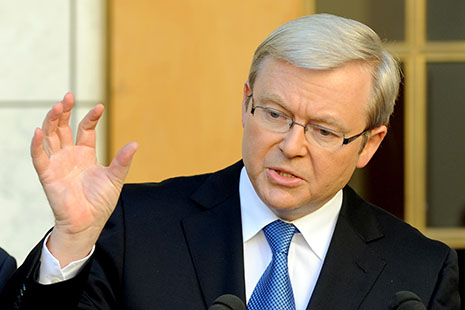 Kevin Rudd announcing that the emissions trading scheme had been delayed until mid 2011, in May this year. AAP Image/Alan Porritt

IT IS DIFFICULT to know what Kevin Rudd really believes. Before the election, he told voters that global warming is the “greatest moral challenge facing the nation.” Now, for no better reason than to stir trouble in the ranks of the Coalition parties, he is obstructing the passage of his own legislation to introduce a renewable energy target. He writes long essays pinning the blame for the global financial crisis on the failings of neo-liberal economics, yet promotes a neo-liberal version of an artificial emissions trading market to buy and sell synthetic financial products called carbon pollution permits and their associated derivatives. He constantly assures voters that he wants to invest in education, health and productive new infrastructure, yet he’ll run short of money because he’s already committed to billions of dollars in handouts to big polluters in clear violation of the polluter pays principle.

It would have been easy to draft legislation to implement Labor’s election promise to expand the Howard government’s mandated renewable energy target. All that was needed were simple changes to Howard’s legislation such as inserting the new target (20 per cent) for the renewables share of electricity production and the new date (2020) for meeting the target. Because the Coalition supports the necessary legislation, it could have been passed without any fuss last year. This would have given investors the legal certainty to start constructing zero-emissions generating plants that will create tens of thousands of new jobs at no cost to the federal budget.

Although the first step towards meeting the target is supposed to take place on 1 January next year, parliament has still to pass the new law. The only reason for the delay is that Rudd’s Machiavellian instincts triumphed over any desire to address the “greatest moral challenge” facing the nation. Instead of grabbing the chance to meet the challenge, he made a completely unnecessary link between the renewable energy legislation and the legislation to implement the government’s Carbon Pollution Reduction Scheme, or CPRS.

Originally there was no intention to provide any compensation to big polluters for the impact of the renewables target, not least because the government’s own modelling shows that it will have almost no cost to the economy. But Rudd announced in May that heavy polluters, including aluminium smelters, cement makers and steel mills, would be compensated, despite being guaranteed big payments under the CPRS.

Rudd knew that the Coalition would not want to be held responsible for denying these extra handouts to businesses. So he made the compensation for the minor cost of the renewables target conditional on the passage of the CPRS, even though there is no reason to link the two bills in this fashion. The upshot is that the renewables bill can’t pass unless the Coalition first passes the CPRS bill. In effect, Labor has chosen to block its own bill to introduce the renewables target, yet the Coalition is copping all the criticism for refusing to “take action” on global warming.

Despite impressions to the contrary, an emissions trading market will not cut a single gram of emissions. That job will be done by a classic piece of government regulation: imposing a cap on greenhouse gas emissions by 2020. Only enough carbon pollution permits will be issued by the CPRS to meet the cap. Once the scheme is due to get under way in 2011–12, substantial emitters (other than those in the agriculture sector) will be required to hold carbon pollution permits. Most permits will be auctioned from 2012–13, with the rest being issued for free to big polluters.

Although the cap is a standard regulatory device, the Rudd government has added a neo-liberal twist by giving the carbon pollution permits the legal status of a property right so they can be traded in a new financial market. Unfortunately, the behaviour of the European trading market shows that prices could be volatile, thus undermining the certainty that government claims is one of the scheme’s pluses for business.

There is plenty of room to debate whether tacking a trading scheme onto a regulatory cap provides a lower-cost means of cutting emissions than simpler alternatives such as combining a levy or tax with mandated emissions standards and other measures. A tax or a levy would give certainty about the price on emissions until 2020, but couldn’t meet a specific cap on their own. Any desired target, however, can be met following the government’s decision to buy emissions offsets from overseas and let them count towards Australia’s target. This escape clause has been included to cover unexpected increases in emissions while the CPRS is operating.

A relatively low-priced levy, offset only by minor compensation, would help fund energy efficiency measures and investment in the research, development and deployment of low-emissions technologies that are crucial to tackling global warming. Ross Garnaut supports a trading system, but argues that “market failure” will prevent the private sector spending enough money on the development of low emissions technologies. This is why he recommended that $3 billion a year be allocated from the CPRS revenue to remedy this deficiency. But the government will not allocate a cent from the CPRS for this purpose. Instead, it will spend the entire proceeds – plus extra from general revenue – to compensate polluters and households for the impact of the scheme.

Garnaut also warns that excessive compensation undermines the claim that the CPRS is a least-cost solution. One of the goals of putting a price on emissions is to send a “signal” to consumers to reduce their use of emissions-intensive products such as petrol. But Rudd has decided to offset the impact of the CPRS on petrol prices fully by cutting the rate of excise. As a result, the CPRS will give motorists no incentive whatsoever to use less petrol. One perverse consequence is that petrol refiners will struggle to reduce emissions, unless other factors such as rising international oil prices help cut consumption. Because there is not a lot refiners can do to reduce emissions from any particular grade of petrol, they will probably be forced to buy extra permits.

Because there is more scope to reduce emissions by improving car engines, governments in Europe, North America and north Asia are imposing mandatory standards for fuel efficiency and emissions on their car industries. The Rudd government is yet to do so, partly because many of its public service advisers have a neo-liberal aversion to regulatory interference in the market place (other than through the CPRS). Relying on the CPRS to reduce emissions from petrol – while completely negating any price signal to do so – won’t produce the least-cost solution to reducing transport’s contribution to global warming.

Because most of the compensation to industry will be in the form of free permits, cash receipts and outlays will be lower than the $13 billion worth of pollution permits the government expects to issue in 2012–13. Cash outlays are projected to be about $9 billion, including $6 billion for households and $2 billion for cutting the fuel excise. This compensation is extremely hard to justify – after all, when governments try to reduce the damage tobacco causes by increasing the excise, they don’t nullify the impact by compensating smokers and tobacco companies. In any event, the costs of the CPRS for households will be modest – about $4 a week for electricity and $2 for gas. Treasury estimates that the impact on the CPI will be highest, at about 0.6 per cent, in 2012–13, followed by barely noticeable annual rises of 0.1 per cent.

At the same time as Rudd surrendered so weakly to demands for compensation for the CPRS, he decided to play the tough guy by applying a 2 per cent cap on the increase in overall government spending in order to bring the budget back into surplus. Every time something busts the cap – and the CPRS compensation busts it spectacularly – something else has to be squeezed below the 2 per cent figure, which is due to start in 2011–12. Because defence and most welfare spending will also be allowed to grow by more than 2 per cent, the cap will disproportionately squash other outlays.

Although it is now only dawning on senior ministers, the decision to bust the cap by splurging billions on compensation for the CPRS will mean that non-exempt sectors such as education, health, transport infrastructure and low-emissions technologies will be hit hard. Yet increased outlays in these areas would benefit households far more than ill-conceived compensation that makes it harder to cut emissions in the least-cost manner. •

Brian Toohey writes monthly on national affairs for Inside Story

The rise and rise of Italy’s postmodern populist 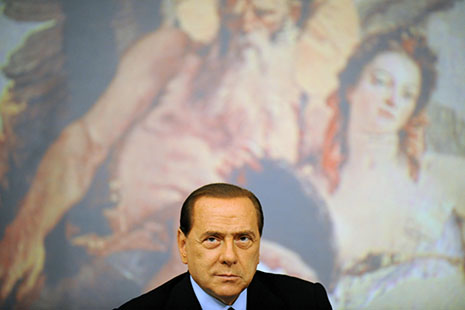