Elephants in the room 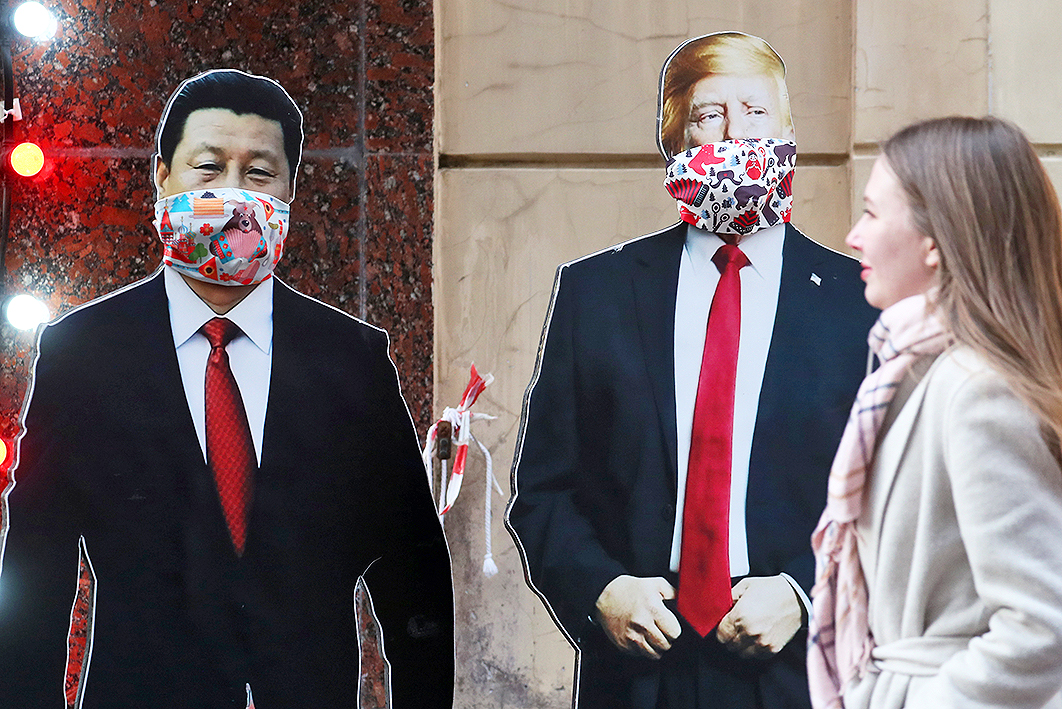 Donald Trump and Xi Jinping, the world’s two most powerful leaders, are colliding in the rush to avoid becoming political coronavirus casualties. For both men, the pandemic creates an existential crisis.

China’s president Xi Jinping looks fearfully over his shoulder at Wuhan’s famous role in incubating the revolution that brought down the Qing dynasty a century ago, and at the great swelling of online anger over the initial cover-up of the coronavirus by unyielding censorship and arrests of bloggers.

Loquacious high-profile real estate tycoon Ren Zhiqiang has been “disappeared” for an online posting that was clearly about Xi: “I see not an emperor standing there exhibiting his ‘new clothes,’ but a clown who stripped naked and insisted on continuing to be an emperor.” But that’s mild enough language compared with the epithets being hurled at, and by, Donald Trump. Over the president’s shoulder stares “Sleepy Joe” Biden, whose predictable, big-government approach may strike many voters as made for these times.

The US–China trade and technology wars are treading water, but can be cranked up again any time it suits either leader. Both countries appear confident that they have the measure of the other, and have been ramping up the rhetoric accordingly.

The strange relationship between such diametrically different figures began as something of a bromance, with Xi showing Trump round the Forbidden City and Trump hosting Xi at his Mar-a-Lago resort. Now both men obviously believe that blaming each other deflects domestic criticism and helps build crucial support among their target audiences.

Handily rewriting the start of the coronavirus story, Chinese foreign ministry spokesman Zhao Lijian has blamed American soldiers for importing the disease to China in the first place. China’s official media claim the virus was already present in Italy before the outbreak in Wuhan.

Even within China — and especially in Wuhan itself — Wang’s call was seen as somewhat premature, as was the publication of Xi’s next bestseller, A Great Power’s Battle Against Epidemic. Wang’s blog was quietly removed and Xi’s book awaits a more appropriate hour.

But Xi and Wang, along with Xi’s chief strategist and propagandist Wang Huning, are already back on the front foot, promoting a worldwide soft-power campaign. The country that won the “people’s war” against the virus is dispatching planeloads of medical equipment abroad, especially to Europe.

That the United States sent about eighteen tonnes of medical supplies, including masks, gowns and other protective equipment, to China in early February has quietly been forgotten in the People’s Republic itself. Yet Trump’s capacity to score points off such hypocrisy appears to have deserted him as he struggles to steer a massively enlarged government fight against the virus.

Leading Australian sinologist Geremie Barmé, editor of China Heritage, has written that “the canker in China’s body politic turned the coronavirus outbreak into a health crisis far worse than it needed to become. And the epidemic, in turn, has only exposed the extent of the party-state’s sickness.”

By contrast, the official Xinhua news agency claimed that Xi’s handling of the crisis showed that he has a “pure heart, like a newborn’s.” This epitome of political innocence recently told Italy’s besieged but grateful prime minister Giuseppe Conte that China was creating a “health silk road” out of its ambitious Belt and Road Initiative.

China wants to emerge from the virus as it did after the 2008 global financial crisis, when it was applauded internationally for “saving” its own economy with enormous stimulus spending. Xi went on to win the hearts of globalisation’s guardians at the World Economic Forum’s annual gathering in Davos, Switzerland.

Back on 24 January, Trump had started on a very different tack, tweeting: “China has been working very hard to contain the virus. The US greatly appreciates their efforts and transparency. It will all work out well. In particular, on behalf of the American People, I want to thank President Xi!”

“It’s not racist at all,” Trump responds, because “it comes from China, that’s why.”

Branding criticism of the People’s Republic as “racist” is a regular recourse for Beijing. The Chinese leadership’s second line of rhetorical attack contrasts its own competence with the American response. Trump has “tried to hide his administration’s lack of… measures” against the virus, says the Global Times, by “passing the buck to China.”

Trump’s blunt riposte: “It could have been stopped right where it came from, China.”

This skirmishing can, and probably will, carry on all year. It suits both sides. •

Rowan Callick, a former China correspondent for both the Australian and the Australian Financial Review, is an Industry Fellow of Griffith University’s Asia Institute.