The contrast between the first terms of two governments – Howard’s and Rudd’s – looks like being vast, writes Norman Abjorensen 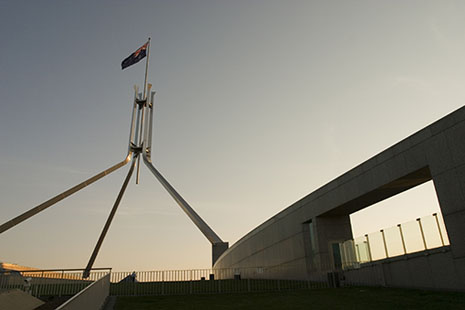 THAT CURIOUSLY ARTIFICIAL media event – the government’s first birthday – has elicited the usual kind of coverage, ranging from ministerial report cards to considered analysis, over the past week. Generally, the Rudd government has been seen as sound, cautious and unspectacular (very much like the prime minister himself).

Interestingly, this first detailed review of Rudd Labor comes as the Howard years are being put under the microscope on ABC television, which means that a useful comparison can be made of the first Howard government (1996–98) and Rudd’s first year. Quite simply, Howard’s government got off to a terrible start; Rudd’s, by contrast, has so far been untroubled.

The Howard Years has made no mention of the ministerial departures and irregularities that characterised the Coalition’s first term. Nor has it alluded to role of the damaged goods the series has showcased – namely, the travel rorter John Sharp and the telecard-spender Peter Reith, who would later effortlessly and seamlessly switch from defence minister to consultant with one of the biggest defence contractors, Tenex. This was not illegal, of course, but ethically it was highly dubious. Reith seems to remember so little these days, so he has probably forgotten that too.

With ministers and parliamentary secretaries departing one after the other and a cowed public service in Canberra reeling from Howard’s onslaught, I offered the opinion to a minister at that time that it possibly was the worst government Australia had ever had, to which the minister responded: “You’re expecting an argument with a proposition like that, but you will not get it from me.” I used the quote, anonymously sourced, in an article in the Canberra Times, and a gleeful opposition seized on it in parliament, with Simon Crean announcing a sweep to identify the minister. (All his favoured candidates were way off the mark.)

By and large, the Howard government enjoys a reputation for competence, but this reputation relies on overlooking that rocky first term and the fact that in 1998 the perception of incompetence very nearly consigned it to one-term oblivion.

It wasn’t supposed to be like that at all. Howard had produced the first federal ministerial code of conduct (“A Guide on Key Elements of Ministerial Responsibility”) in 1996 and an associated Cabinet Office system for registration of interests. Under the code ministers were required to divest themselves of all shareholdings in the area of their portfolio. While the code led to seven resignations involving conflicts of interest and misuse of allowances in 1996–97, the prime minister was subsequently less rigorous in applying the rules. There was no provision for an independent oversight body such as an ethics or parliamentary standards commissioner.

In 1998 Senator Warwick Parer, a close associate of Howard’s and an ordinary minister, was found to have substantial shareholdings in the resources sector – holdings that had increased tenfold in value during his first year as resources minister. The prime minister now declared that the rules set down in the guide were “guidelines, not a death sentence.” The minister was not required to resign but didn’t contest the 1998 election.

The code was amended in 1999 to allow ministers to own shares in companies associated with their portfolios. There was no more enforcement of the code for personal wrongdoing between 1997 and 2007 and none at any time for “departmental errors.”

Among the examples of personal wrongdoing that escaped sanction was Peter Reith’s decision to give his parliamentary telecard to his son, allowing young Reith and others to make 11,000 calls from 900 locations around the world at public expense. After a sustained outcry, the minister repaid the money (some $50,000) but he was not otherwise sanctioned.

Nor were there any rules in the Howard Code covering post-separation employment for ministers. This contributed to the perception that some ex-ministers might be profiting from their former office when they immediately take up employment in areas related to their previous ministerial responsibility, and that the possibility of such employment may affect decisions taken while still in office.

The lack of rules played out over the full life of the Howard government. High-ranking ministers increasingly went straight from politics into lucrative employment with corporations operating in areas they had overseen as ministers. For example, in addition to Reith’s employment with Tenex:

• Michael Wooldridge, Howard’s first health minister, agreed to give the Royal Australian College of General Practitioners a grant of $5 million for a new Canberra building a week before the 2001 election – and went to work for the college shortly after.

• Former agriculture minister Peter McGauran accepted a job in the horse breeding industry after having overseen the provision of relief measures in 2007 in the wake of the equine influenza outbreak.

Although he was not an elected office-holder, the prime minister’s longstanding chief of staff, Arthur Sinodinos, resigned in late 2006 to take up a position with a major investment bank, one of three financial institutions that had recently arranged the government’s share offering of Telstra.

Other comparable democracies, including Canada and Britain, have introduced strict laws to govern the employment of ministers and ministerial staff after they leave politics. In Canada ministers, ministerial advisers and senior public servants are banned from lobbying for five years under the Federal Accountability Act of 2006. In Britain an Advisory Committee on Business Appointment Rules advises on post-separation employment.

After the first meeting of the new Labor cabinet, Kevin Rudd announced a new code of conduct for ministers, which requires that they not hold shares unless they are held in superannuation funds, publicly listed funds or in a trust over which the minister has no influence in regard to investment decisions.

The code also places a twelve-month ban on departing ministers having business dealings with MPs, public servants or defence personnel on any matter they dealt with in their official capacity during their last eighteen months in office. Although this code is not enshrined in law, departing ministers will have to undertake not to take advantage of their previous office.

Rudd’s first year could not have been more different from Howard’s. •

Norman Abjorensen teaches politics at the Australian National University. His latest book, John Howard and the Conservative Tradition, is published this month by Australian Scholarly Publishing