Heading northwest on the Tanami Road 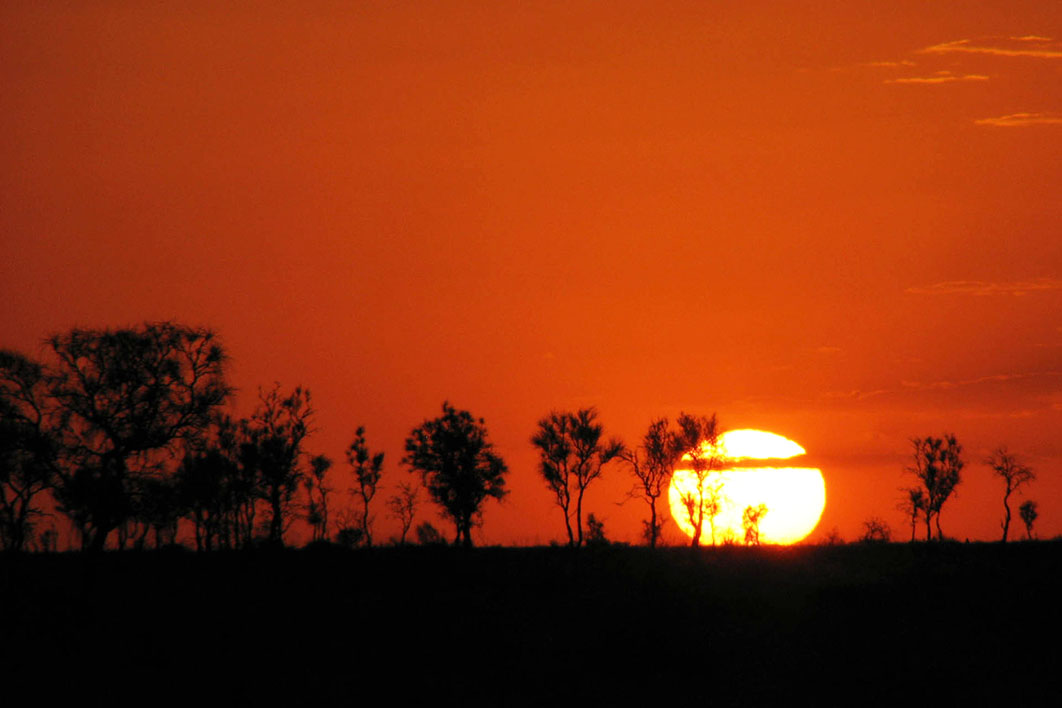 It takes me longer than I expected to choose the flowers for Evelyn’s funeral. The store is cluttered with cheap hardware, craft materials, cosmetics, picture frames, flowerpots, party costumes. Artificial flowers for Aboriginal funerals are a staple product, and there’s so much choice that I find myself looking for blooms that remind me of Evelyn — tall, dark-red dahlias, purple delphiniums, and maroon and ochre roses, their cloth petals as full-blown as the real things.

When did it become the practice at Aboriginal funerals to cover the grave mound with artificial flowers? In the deep desert they left the corpses to desiccate in the spinifex. Evelyn’s people built platforms out of branches, and suspended the bodies above flat stones, reading into the spatter of dissolving body fat the story of who was responsible for the death.

While I’m pondering my choices, a swarm of Aboriginal children enters the shop, splitting into ones and twos, and moving with practised efficiency down the aisles. A girl of twelve or thirteen saunters past, sizes me up, and palms a small bottle of perfumed oil. She knows I won’t give her away. A matronly shop assistant swoops on the girl, grips her wrist, and peels the bottle from her hand, gesturing with her jaw towards the door. “Out!” The child swans away, followed by her cohort, shrieking and giggling as they make off down the street.

It’s a seamless piece of choreography, everyone playing the part they’ve been cast to play, the moves as familiar and practised as a long-running piece of theatre. When I pay for my flowers, the shop assistant shakes her head. “Little ratbags,” she says, without anger.

The funeral is a day’s drive from Alice Springs, in Western Australia. When my car breaks down 600 kilometres up the Tanami Road, 300 kilometres short of my destination, it feels like a replay of the trip I made fifteen years earlier with my friend Pam Lofts to attend the funeral of another Aboriginal woman, Patricia Napangarti Lee. That time, we made it with the help of the local station people and the staff of the Granites goldmine, and I know that the same network will get me there this time. In the years between now and then, Pam has died, too, of motor neurone disease.

I’d been aiming to camp at the turn-off to my old home, the cattle station my family established in the 1960s, and it’s when I stop near the abandoned roadhouse of Rabbit Flat that I realise I have a problem. Hanging onto the bull bar of my twin-cab utility while I squat to pee, it takes me a moment to realise that the detached idler arm is the reason for the peculiar angle my steering wheel has adopted in the last half hour, and that I’m in trouble.

It’s not far off sundown, and I’m not far from where I had intended to camp, so I drive in the lowering light to the station turn-off, choose a clear space near a stand of mulga trees that will provide morning shade, let Pirate the dog out, collect some firewood, and think about what to do. The mulga branches make their familiar tracery against the fading red horizon, and my body makes its cellular adjustments of recognition that we are back on home ground.

My mobile phone shows a single bar of reception. This amuses me, given I am in one of the remotest locations in Australia and until six months ago it was rare to get one bar of reception where I live, thirty kilometres from Canberra, the national capital. When I climb onto my roof-rack, the phone shows three bars. I get down and light the fire, feed Pirate, make myself a gin and tonic from the emergency supplies in the esky, climb back onto the roof-rack, and consider who to contact.

On a whim, I text my youngest brother in Brisbane, not because he can do anything to help, but because we have made several trips out here together, and he will know exactly where I am and how it feels — the night falling, the mulga wood fire flaring, the particular Tanami stillness we internalised as children and which bonds us across political and other differences.

Within a few minutes, he rings back.

“If anyone else was broken down on the Tanami, I’d be worried,” he says.

I have a flash of regret that I’m someone no one worries about, followed by the knowledge that being worried about has always irritated me, and that it’s been part of my life’s project to become someone people don’t worry about. We chat for a while, and I flag my options — to contact the station and see if I can borrow a vehicle to drive to the funeral, or to backtrack to the mines and hope to get my car repaired in time to make it under my own steam.

My brother rings off and I call the station, leaving a message when no one picks up. I also text my colleagues in Alice Springs, the team I’m taking leave from to attend the funeral, to let them know that I’ve broken down and will keep them in the loop.

During the night, the fire burns down to a bed of coals, and I wake early to the intrusive presence of the small, persistent, moisture-deprived flies that appear every decade or so in response to some inscrutable climatic rhythm. While I’m boiling the billy for my morning cup of tea, the phone rings — it’s the station manager, Mark, who has just picked up my message. I explain my situation, and he says he will come out and see what he can do to get me on the road. It’s a fifty-kilometre drive, and it will take him a while to organise the tools he needs, so I brew another billy of tea, move the car so that the front end will be in the shade all morning, and settle down to wait.

The current station manager is the youngest son of the only other white family that settled in the Tanami in the 1960s. As part of a move to rationalise the viability of Aboriginal-owned cattle stations, the lease was recently put up for tender and taken over by Mark and an older brother. My family left and his family stayed, but we share the knowledge of what it means to live here.

Mark understands my imperative to get to the funeral. Evelyn’s brother worked as a stockman for my family in the sixties, and Evelyn took to heart the fact that as a baby I was given the skin name of Napurrula, making me her sister in the Aboriginal kinship system. Apart from the relationship we had and the personal grief I feel, I am family, and this is something I have to do.

The other urgent reason to get to the funeral is that, at the request of Evelyn’s daughter Megan, I’m bringing food for the wake. There’s a crate of potatoes, onions and sweet potatoes on the tray, and the back seat is loaded with boxes of lettuces, tomatoes and avocados. Covered with wet towels, the salad vegetables are travelling well so far, but there’s a time limit to their viability.

A LandCruiser pulls up beside me, with a toolbox and a welder tied down on the back.

He squats by the front wheel of my car and assesses the damage. It’s a year since we last spoke, apart from the telephone conversation this morning.

“Don’t you have a partner who can come on these trips with you and keep you out of trouble?”

He laughs, crawls under the vehicle, and sets about welding up the broken part. It’s a serviceable job, and will get me back to the Granites, but probably won’t stand up to 300 kilometres of corrugated road.

I make my way back to the Granites turn-off and call the number for visitor enquiries. Time passes. Eventually, a woman emerges from the demountable building beside the entry boom gate, and invites me and Pirate into the airconditioned interior to wait for the return of the senior mechanic, who is out in the field on a job. She’s pleasant and friendly, and we chat for a while before she gives me the wi-fi password so I can use my laptop, and we both get on with some work while Pirate sleeps on the lino floor.

More time passes, and the mechanic arrives, checks my car, unbolts the idler arm, and takes it back to the workshop to be repaired by a professional welder. Half an hour later he returns, reattaches the part, and tells me I’m good to go.

Most of the day has been consumed by this process, and it’s late afternoon by the time I get back on the road, with 350 kilometres to travel and a load of food to deliver. The lettuces and tomatoes are still in good order under the wet towels, although the waxed cardboard boxes they are packed in are getting soggy.

Because there’s a time difference of an hour and a half across the border, it’s only seven-thirty when I arrive in the community, although it’s been dark for several hours. The Sorry camp is at Daisy Kungah’s house, where fires are burning and people are hunkered in groups that disperse into familiar individuals as they recognise my car and stand up to greet me.

“We was worrying for you. We thought you was coming this morning.”

“At least somebody worries about me. I broke down — took all day to get the car fixed.”

Given the unreliable vehicles everyone drives, breakdowns are too common to provoke comment. I made it, and that is all that matters. I find Megan, and embrace her while she keens, the ritual wail of shared grief I can never bring myself to make. Then I make my way around the assembled friends and relatives, embracing, shaking hands, beginning at last to feel my own sadness through this collective sorrow.

Once the Sorry business has been attended to, I unload the crates and cartons of food, hand out packets of tobacco, negotiate with Daisy that I will come back early in the morning to have a shower, and drive back to the river crossing, where I find a place to camp away from the road, collect firewood, light a fire, throw down my swag, and exhale.

Evelyn’s death has been sitting in my mind like a parcel waiting to be unwrapped. It has not been possible, in my other life, to feel the loss properly. I could only hold open the space of grief until I re-entered her world and the visceral knowledge of who she was. She stalks across my memory in a dress the colour of the dahlia flowers I’ve brought to grace her grave. •

This is an edited extract from Wandering with Intent, essays by Kim Mahood (Scribe $35).

Kim Mahood is a writer and artist who grew up in Central Australia and on Tanami Downs Station. She is the author of two previous non-fiction books: Craft for a Dry Lake (2000) and Position Doubtful (2016), and the co-editor of Desert Lake: Art, Science and Stories from Paruku (2013).