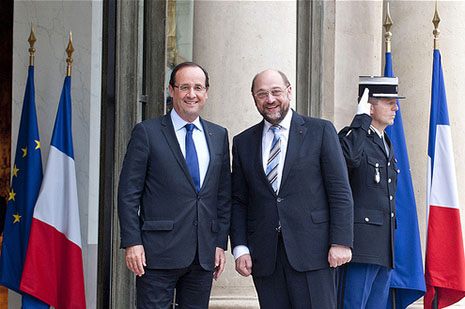 AS François Hollande hits the hundred-day mark, what is the verdict on the man at the top of French politics? In terms of style, his trademarks emerged quickly enough. He has renewed the Gaullist interpretation of the presidency: in accordance with the letter of the constitution, he sees his role as an above-the-party arbiter who lets the prime minister, Jean-Marc Ayrault, govern. Unlike Nicolas Sarkozy, Hollande neither polarises public opinion nor arouses strong feelings. He is generally described as “decent” and “modest,” adjectives that were never associated with Sarkozy.

Three months on, however, the novelty of this change is beginning to wear off. Over the course of the past week, commentators in the media have called on Hollande to start being more specific about his policies and priorities. Some journalists have even begun to mock his quiet tone: the expression présidence pépère (“cushy presidency”) has been used in several broadsheets.

So where is France really headed? In line with Hollande’s Agenda for Change, released on 4 April, the new Socialist majority in parliament passed a rash of bills before the recess on 2 August. Most were intended to generate an extra €7.2 billion to meet the 2012 deficit targets. The highest-profile reversal of previous government policy was the decision to resume taxing overtime pay and put an end to state subsidies to fund that exemption. “Work more to earn more” was the flagship measure of Sarkozy’s 2007 campaign. It aimed to boost the economy by deregulating the labour market. In fact, this reform did nothing to stimulate employee income but cost the state more than €25 billion in tax relief.

Another law reinstated salary-based charges paid by employers – the previous government had shifted those costs to the general public in the form of a tax increase. The infamous Tepa law, passed in August 2007 – which lowered taxes on assets of wealthier people – was also revised. Jérôme Cahuzac, the Socialist minister for the budget, declared that this “exceptional contribution is a big effort being demanded of those who can afford to make it.” It sounded like an uneasy plea to the rich, rather than a confident decision. This half-hearted approach augurs badly for the intentions of the government when it comes to addressing the widening gap between the rich and the rest of the population.

But what about the much-heralded Tobin tax, introduced on 1 August? It’s worth clarifying that this is a tax on only 0.2 per cent of the value of financial transactions. Another tax aimed at high-frequency trading was also implemented. The so-called frequency tax is 0.01 per cent on the amount of stock orders modified or cancelled that exceeds 80 per cent of all orders transmitted in a month. In short, it’s more of a “non-transaction” tax.

These “achievements” promised to shed a new light on Hollande’s much trumpeted intentions of “further regulating the markets.” The government has used taxation to try to dissuade bankers from deliberately placing false orders in an attempt to manipulate the market. Take note: Hollande did not try to ban certain practices or introduce new rules. He is simply trying to benefit modestly from the system as it stands.

In the run-up to the election, Hollande had promised to renegotiate the EU fiscal compact. This endeavour was supported by a large majority of voters. On 29 June, after one of those dramatically choreographed EU summits, a glowing Hollande appeared before cameras and declared: “Europe has changed in the right direction.”

Yet the French president spectacularly failed to keep his word. Angela Merkel and Sarkozy’s treaty has prevailed unchanged. Jean-Luc Mélenchon, the Left Front presidential candidate, denounced it as a “knockabout farce.” All Hollande could claim was a derisory “growth pact” worth 1 per cent of the European Union’s GDP (€130 billion). More embarrassing was the revelation that the growth package entailed deploying up to €55 billion in unspent EU structural funds.

The Socialist president has not opposed the EU-inspired austerity programs that are strangling the economies of Greece, Ireland, Italy, Portugal and Spain. Worse, he has implicitly endorsed them by sending an unprecedented, thinly veiled warning to Greek voters days before the dramatic rerun of the general elections. He hinted that if Greeks insisted on casting their votes in favour of Syriza, a left-wing “anti-austerity” coalition, it could cost them Greece’s participation in the eurozone.

On 9 August, France’s constitutional council ruled that the adoption of the EU fiscal compact did not require a change to the constitution. This would have necessitated the support of three-fifths of MPs, an unachievable majority. Instead, the treaty will enter into force if the government passes an “organic law” by a simple majority. Hollande said there would be no referendum on the new treaty – he is afraid of losing it.

This denial of democracy has infuriated the left. Many argue that the pact allows Brussels to dictate national policy by allowing it to impose sanctions on countries that fail to respect a structural deficit ceiling of 0.5 per cent of GDP. The diktat will restrict all governments’ room for manoeuvre in the foreseeable future. What is more, it dramatically undermines parliament’s powers to pass laws as it sees fit for the country. When the French return from their summer holidays, they can only hope for further spending cuts (€33 billion in 2012–14) and tax rises to meet Hollande’s 3 per cent deficit targets by the end of 2013.

Hollande has chosen to stay the course of the punitive austerity policies that are ruining European countries. Mr Normal has quietly taken to the neoliberal sea – and he makes no waves. •

Philippe Marlière is Professor of French and European politics at University College London.