Fremantle on their minds

Does the Greens win in last weekend’s by-election have national implications? Paul Rodan takes a close look at the result 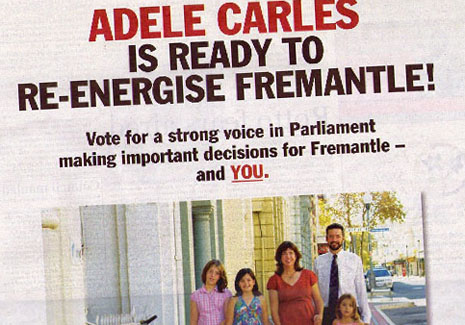 Successful Greens candidate Adele Carles advertises during the campaign in the Fremantle Herald.

SOME COMMENTATORS see the Greens victory in last Saturday’s Fremantle state by-election as an ominous sign for a Labor Party juggling the conflicting demands of its inner urban and outer suburban support bases. This may be so, but several caveats need to be borne in mind.

In its candidate selection, Western Australian Labor seemed to exceed even the usual level of ineptitude the party brings to the task. Conventionally, a local government–based candidate represents good value, even if party membership is bestowed at the eleventh hour. In this case, however, the mayor in question not only lacked an obvious progressive political identity, but struggled to repudiate allegations that his pedigree was, in fact, anti-Labor. Piled onto this was his mayoral identification with pro-development elements in the local area: anathema to Labor’s substantial anti-development base in a seat such as Fremantle, and manna from heaven for the Greens.

Just as there are now some state and federal seats where the electoral contest is effectively between the Coalition (usually the National Party) and high-profile (usually conservative) independents, there is a clutch of seats where the contest is effectively moving towards Labor versus Greens. Fremantle follows the federal seat of Cunningham, where a “safe” Labor seat was lost to the Greens in 2002. Interestingly, Labor was in opposition in both instances, and party optimists will point out that Cunningham reverted to Labor status at the ensuing federal election.

Leaving aside by-election idiosyncrasies and dubious candidate selection, what are the broader implications for the Labor versus Greens struggle? Clearly, there is a political dynamic at play here that, when simplified, pits an educated, environmentally conscious element, whose votes alternate between Labor and the Greens, against a pro-jobs, pro-development constituency whose votes alternate between Labor and Liberal.

In inner suburban seats like Fremantle, this is a no-contest. Unlike the Greens, though, Labor has to assemble a state or national majority in order to govern. Hence, a strategy that can deliver seats like Fremantle may prove counter-productive in marginal outer suburban seats where voters may resent being lectured by inner urban elites about sacrificing their four-wheel drives and plasma TVs for some greater good.

At the federal level, Labor’s task is complicated because it’s in government, confronting the inevitable policy compromises which are poison to its green-tinged supporters. By opting for a more graduated, measured approach on climate change, Labor runs the obvious risk of driving its hardcore environmentalist supporters into the embrace of Green candidates supporting environmental purity (although no such stampede has yet been detected in national polling). And, while these votes probably return as second preferences in outer suburban lower house seats, the scenario is more complex in multi-member upper house contests and in inner suburban lower house seats.

In the Senate, disgruntled Labor supporters can help elect Greens senators, a phenomenon which has been evident for some time now. From a Labor point of view, this is regrettable, but Greens senators are at least (broadly) ideologically onside and (1975 notwithstanding) senators don’t decide who governs.

In the 2007 federal election, there was one seat, Melbourne, where the ultimate contest (after preferences) was between Labor and the Greens. In another four seats, Labor polled less than 50 per cent of first preferences and the Greens polled over 10 per cent. In each case, the Liberal primary vote was under 40 per cent, but only in the seat of Sydney was it low enough for the Greens to almost finish second.

In the 2006 Victorian election, the two-party preferred contest was between Labor and the Greens in three lower house seats. Each could be viewed as vulnerable if there is sufficient disillusionment with a (now) long-term Labor government, especially with development issues potentially aiding the Greens’ cause. In two of the three cases, the margins were close, and one suspects that the sitting members (both ministers) may have taken more than a passing interest in the Fremantle outcome.

In 2007, there were two such seats in New South Wales, but, come the 2011 state election, losses to the Greens will probably be the least of Labor’s worries.

Ironically, Labor’s fate in this scenario is to a great extent in the hands of its Liberal opponents. Obviously, the absence of a Liberal candidate in Fremantle was by-election specific, and unlikely to be replicated at any general election. While high strategy might justify a non-contest, arguments about party morale and boosting the upper house vote usually prevail. Hence, the Liberals need candidates who are either pretty awful and/or run dead, thus finishing third and allowing their preferences to defeat Labor. That said, it remains the case that a proportion of Liberal voters will not follow a card which preferences the Greens over Labor, being more concerned about policy and ideology than with the strategic value of dividing the progressive side of politics.

In summary, local factors seem to have been decisive in the Fremantle result and the federal implications seem limited. But for a couple of ministers in Victoria the outcome may have served to remind them of their parlous hold on their Green-trending electorates. •

Paul Rodan is an adjunct research associate in the School of Political and Social Inquiry at Monash University.