From Europe, a carbon game changer?

Australia continues to flounder, but help could be on the way from the new president of the European Commission 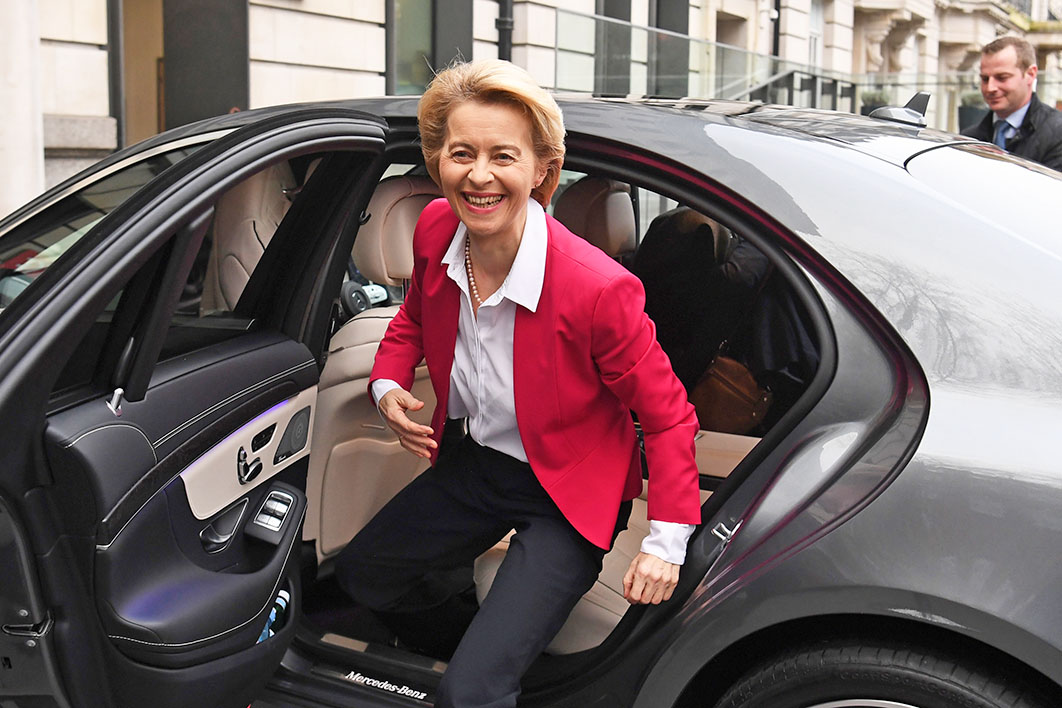 Survey after survey reports that most Australians want our governments to tackle climate change. But when push comes to shove, as we know from experience, many of us are susceptible to scary stories about the household costs of such action.

The Liberal and National parties also have a big problem with climate science, as we’ve been reminded this week. A small but noisy section of their membership demands that no quarter be given in what they see as an ideological battle. In the latest instalment of the saga, an eruption among a minority of National MPs, themselves a small minority of government MPs, has propelled the government even further from reality. It would take a prime minister with a very large dollop of internal authority to drag his or her party towards a rational long-term approach — but Scott Morrison, in 2020, is not one of those.

And if Labor wins the next election, it will again be reliant on the Greens to pass legislation in the Senate (or, if it’s unlucky, the Greens plus others, as the Rudd government faced), and the minor party, especially under fire-breathing leader Adam Bandt, will drive a hard bargain. Labor, in any event, has gone cold on climate action since the sad events of last May.

Australia exports lots of coal; fossil fuel interests have deep pockets. Some of the coal we dig up is burnt here. Most of it is used overseas (counting as others’ emissions), which provides an added incentive for vested interests not only to hold Australia back from doing its bit, but also to hold back the planet as a whole. If China and India suddenly moved to 100 per cent renewables who would buy our wonderful shiny black product?

And let’s not get started on News Corp.

For these reasons and more, Australia is one of the laggards when it comes to action on climate change. Fortunately — and please don’t take this the wrong way — we only produce a tiny proportion (between 1 and 2 per cent) of the world’s greenhouse gasses (though more like 5 per cent if you take into account our fossil fuels burnt in other countries), and so our actions don’t matter that much in the scheme of things. Australia’s fire catastrophe is evidence the world is not doing enough. Nothing this country could have done over the past decades would have made a discernible difference.

That common riposte to questions about the cost of taking climate change action — “well, how about the cost of not taking action?” — is too glib by half. For the planet it’s definitely the right response, but for one small country the equation is obviously much more complicated. In theory Australia could freeload and hope that others do the right thing, and whether they do or don’t, we’re still better off.

The big majority of international elites, technocrats and heads of government, including our own Scott Morrison, know what needs to be done. Australian governments have put in place policies with far less popular support than this.

As we all know, the problem is the prisoner’s dilemma, or tragedy of the commons, or whatever else you want to call it. If each nation were actually responsible for the temperature inside its borders, those calls for a gun buyback–style response to the fires — for quick action by all Australian governments — would make sense. And overseas, even overt climate science deniers like Vladimir Putin and Donald Trump would be motivated to prioritise practicality over political expediency. (Okay, maybe not Trump.)

As it is, everyone thinks they can get away with doing little. And it works this way because each country’s contribution to solving the problem is measured by how much it reduces emissions within its borders.

But does it have to be this way?

Let’s take a step back. The most common method of reducing carbon emissions, both in advocacy and in practice, is by putting a price on carbon at the level of production. As a rule, the money raised is returned to consumers in one way or another. The price both lessens demand for the product and incentivises producers to find less carbon-intensive ways to make it.

John Howard’s 2007 emissions trading scheme would have been like that, as would Kevin Rudd’s. The Gillard government’s carbon price worked that way from July 2012 to June 2014. Once the Abbott government abolished it, to the thunderous applause of one hand clapping, Australian emissions began growing again.

But, particularly since the global financial crisis, nation after nation has baulked at doing this, or at least doing it to great effect, because the prospect of economic pain is too off-putting.

Pricing carbon at production means the widgets Australia produces become more expensive, at least in the short term. They are therefore less competitive with those made overseas, both in the domestic market and beyond our borders. To the extent that it leads to more widget production in other countries, the end result can actually be more global emissions.

Of course, it would work if all countries did it simultaneously. And if it were under an international cap-and-trade system, even better, with Adam Smith’s invisible hand working its wonders. But that’s not even close to happening.

One problem is that international frameworks, such as the Paris Agreement, talk in terms of emissions by country. Each country must lower its emissions.

For years, if not decades, some people have been suggesting a different approach, one that would all but eliminate freeloader incentives. They reckon that the measure should not be production, but consumption. Countries should aim to lower their use of goods whose production leaves a carbon footprint. Carbon should therefore be priced at consumption, not at production.

Economist Geoff Carmody was spruiking a carbon consumption tax back in 2008 when the Rudd government’s doomed carbon pollution reduction scheme was still in endless negotiation. (See his various articles here; his thinking seems to have evolved over the years to perhaps take into account emissions embedded in exports.) Under such a scheme, Australian consumers would pay a levy on goods whose production created emissions, regardless of where they are manufactured.

What would that change? It would change everything.

It would mean a domestically produced widget would be taxed the same as an imported one. That would be good for our manufacturers. And, as with the GST, our exports would leave these shores without a carbon price; it would be up to others to price them if and when they get serious about climate change.

There would be no need for the carve-outs and exemptions of trade-vulnerable industries that have characterised all carbon-pricing policies.

It would mean we reduce the emissions from producing and selling goods in Australia but don’t have an incentive to do the same with goods for export — unless and until other countries do what we do and price carbon emissions.

The tax on consumption was, to be blunt, the preferred policy of people who didn’t really want the country to be too gung-ho about unilateral action on climate change. Big business liked it. (Before the 2010 election campaign this was what people usually meant by a “carbon tax,” an alternative to an emissions trading scheme.)

It wouldn’t cut our emissions as much as pricing production would, but it would (in a small way) provide material encouragement for other countries to make inroads. And it would more likely be taken up around the world, because unilateral adoption wouldn’t be too painful. And if a tax on consumption were taken up by all countries, the outcome would be roughly the same as all countries pricing production. The more countries that did it, the greater the incentive on others to do the same.

That road wasn’t taken, and in 2020 the planet’s prospects seem bleak. Expecting countries to take responsibility for their own emissions has turned out to be unrealistic. Some are pricing carbon, but modestly. Few are doing very much, partly because they fear losing trade competitiveness.

But help may be on the way, in the form of a carbon border adjustment (or carbon border tax), mooted by the new president of the European Commission, Ursula von der Leyen. Stripped of complexity, and filling in the gaps (it’s just an idea at the moment), the plan would add one or perhaps two accessories to Europe’s current scheme of pricing carbon at production. The first is a tax (or, more accurately, an obligation on importers to buy carbon allowances) on imports that haven’t faced a carbon price in their country of origin . This would help European producers who sell domestically and already pay a carbon price. The other element, and this is only mentioned in some descriptions of the scheme, would be a subsidy for carbon exports, to eliminate the competitive disadvantage of Europe’s carbon price. If this second component were put in place, it isn’t clear whether exports to countries that do price carbon would receive the subsidy.

All told, a carbon border tax “adjusts” for the competitive disadvantage suffered by European producers because of their carbon price. It levels the playing field.

Notice that the dynamics are very similar to simply pricing carbon consumption. All widgets purchased in Europe would incur a carbon price, regardless of where they’re made. And all goods exported from Europe wouldn’t, unless the importing country priced it. Like a carbon consumption tax, it would be somewhat inflationary, but good for European jobs.

It’s more complicated than that of course. But like a carbon consumption tax, it shifts some of the burden to other countries. And (also not spelt out) it means Europe would emit more carbon than it would otherwise.

The impact on Australia, for example, might go like this. Europe prices carbon in the aluminium we export there. That would be an incentive for us to price it instead, along with aluminium sold domestically, because then our government would receive the revenue. Australia (and other countries) might choose a consumption tax (in which case the EU gets to keep the tax on the aluminium it buys from us) or (like the EU) a production price plus border adjustment. Or another combination.

One problem with a carbon border adjustment is that, even if designed to be consistent with World Trade Organization rules, it looks a lot like trade protection. The United States has indicated it would not take it lying down.

A tax on consumption would be more transparent, but that would mean totally undoing Europe’s current production-pricing arrangements. Both systems largely eliminate the freeloading incentives, and indeed motivate other countries to follow suit. Pricing carbon at production doesn’t do that.

There would have to be rules, such as not taxing others’ carbon if you’re not taxing your own. Provided it doesn’t blow up into a trade war, the border adjustment could catch on. If it did, that would be brilliant for the prospect of global climate change action.

And, yes, the scheme could even potentially prod our own troubled nation to lift its game. •