From operating theatre to political theatre

The virtues of governmental diversity got lost in the debate about Kevin Rudd’s hospital policy, writes Graeme Orr 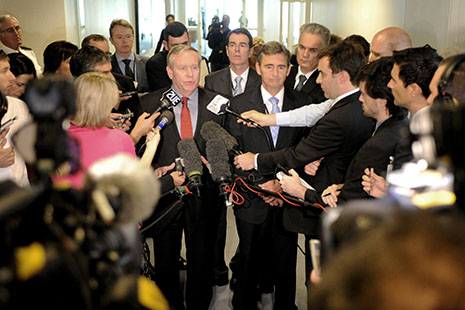 MR RUDD launched a health plan, focused on public hospitals. Then he demanded that the owners of those hospitals, the states, all sign up. Some were keen, some relieved, some doubtful. One in particular was very negative.

Mr Brumby reckoned Victoria’s system led the way and suggested a different model. A few states joined in, chanting “more money.” Others joined Mr Rudd to paint Mr Brumby as a potential wrecker of policy unity. Mr Rudd didn’t want to take over public hospitals nationwide, but he wanted to put the Commonwealth in the driver’s seat.

Now imagine you ran a loose but supposedly cooperative enterprise. Say a company with factories in different places that were used to doing things differently. Imagine everyone agreed that things needed to be improved, but there was no consensus as to how. You, the overall manager, proposed a model, but another factory, which had been doing okay, asserted that its model was better.

The logical thing would be to trial your model in those factories that were ready for it, and let the factory with its own model do things its way. Then, in a few years time, you could compare performance.

In political science it’s called competitive federalism, but we could also call it governmental diversity. In a federal system, we tend to look for diversity between states at the same level – different rates of stamp duties, for instance, or different drink-driving limits. We used to see it culturally, outside government, too. (Remember the strict divisions between which football code was followed in which state?)

In any complex federation there’s also a lot of overlap between national and regional government – especially in Australia, where the states are powerful in theory but Canberra now has most of the money. This overlap is usually labelled a problem, a cause of the “blame game” where there aren’t clear lines of accountability. But given cooperation, the overlap can be used to accommodate, even to embrace, competitive federalism.

There’s plenty of precedents for this kind of two-track approach. Years ago Jeff Kennett ceded Victorian industrial relations to Canberra while the other states retained a mix of state and federal laws. Today, that balance is inverted. All the states bar Western Australia have ceded their private sector industrial laws to Canberra.

Of course, it’s election year, both federally and in Victoria. Mr Rudd was goaded into attempting to appear decisive by an opposition leader who has caught attention with his own he-man act. So what we saw in both the politics and reporting of the health debate were the politics of posturing. Sure, through Commonwealth eyes it would be cleaner to have a single model for public hospitals nationwide. But if one or two states really wanted to hold out, the answer was to sign up the states that were convinced and negotiate a distinct model for the hold-outs. As long as no state wields a veto power, competitive federalism can avoid state-specific gouging of benefits.

The posturing we’ve witnessed has its roots in “anti-politics” – not Pauline Hanson–style, bring-the-temple-down anti-politics, where someone new plays politics by feigning that they are not a professional politician – but a more routine kind of anti-politics. It’s the politics of putting down other politicians while scrambling for a moral high ground. Negative politics can be a turn off, but it can also work when the electorate is grumpy. And this one is grumpy (hardly surprisingly after an economic downturn). The grumpiness is evidenced by oppositions becoming more oppositional lately, which further stokes the grumpiness.

Anti-political politicking – also known as finger-pointing – has actually been endemic in Australian politics since the first fleet. After all, the colonial governors had Whitehall, and the colonial parliaments had each other. Since Federation it has been institutionalised in stoushes between Canberra and the states, or stoushes among the states. It is especially useful because it permits members of the same party to “stand up” to each other, and thereby appear non-partisan.

Anti-politics particularly flourishes in federations because leaders can criticise each other across party lines. By rights that shouldn’t work: doesn’t it project disunity? It may, but in standing up to your own kind, you appear above partisan politics.

Of course, some of the posturing was just a negotiation tactic: hard bargaining over money, more pecuniary than policy. Of course this was theatrical as well. The spigots opened and extra money flowed – as it was always likely to – so everyone could claim credit (the states for “forcing” the money, the Commonwealth for providing it).

That still leaves Western Australia’s Mr Barnett, who doesn’t mind the plan and wants the extra funding, but objects to adjusting the 1999 agreement that the GST will flow, no strings attached, to the states. Of course he is the only Liberal premier and he’d not want to hand Mr Rudd an easy, bipartisan consensus. But let’s take Mr Barnett at face value: he sees the 1999 GST agreement as a fundamental principle.

At law it is not. It’s not enshrined in the Constitution. It is not a binding contract. It is a “framework” of “principles.” The GST, at root, is just another Commonwealth tax. But Mr Rudd would need Senate approval to re-cast it. After all, both Howard and Rudd governments enshrined the intergovernmental agreements in legislation.

Politically – and in the spirit of cooperative federalism – the agreement should only be reworked by consensus. The current agreement was expressed to “operate indefinitely from 1 January 2009 unless the Parties by unanimous agreement in writing revoke it.” Mr Barnett is free to hold onto his principle and hold out against such a rewriting.

But to do so would hardly be in the spirit of federalism. If the majority of states wish to sign on to a Commonwealth plan, it would be hypocritical for one state to hold that up in the name of “states’ rights.” Provided Western Australia is left in no worse position than when the negotiations started, it is entitled to preserve its status quo in a new intergovernmental agreement, but not to object to other states choosing a different path.

If there really is an important policy or principle difference underlying the Western Australian position then the ideal federal outcome would be for its model to apply to it alone, and a different model apply elsewhere. But perhaps there is no policy at stake, and money will trump any posturing over principle. If so, while this pudding is still cooking, expect everyone to soon be tucking into it. •

Graeme Orr researches the law of politics at the UQ Law School.

Sri Lanka: anatomy of a tragedy

The belief that conditions in Sri Lanka have fundamentally changed is wishful thinking, write Stephen Keim and Roshan de Silva Wijeyeratne in this account of the country’s ongoing conflict

Above: A woman and her son in front of their temporary home, surrounded by marked minefields, near Mallavi in northern Sri Lanka.
Photo: Russell Watkins/ Department for International Development 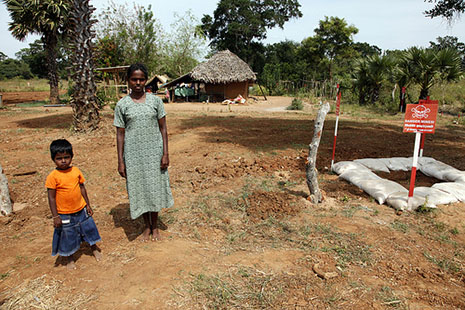 Above: A woman and her son in front of their temporary home, surrounded by marked minefields, near Mallavi in northern Sri Lanka.
Photo: Russell Watkins/ Department for International Development