Funny things happened on the way to the Forum

Even the Romans used jokes to drive home their point, though they tend to lose something in the translation 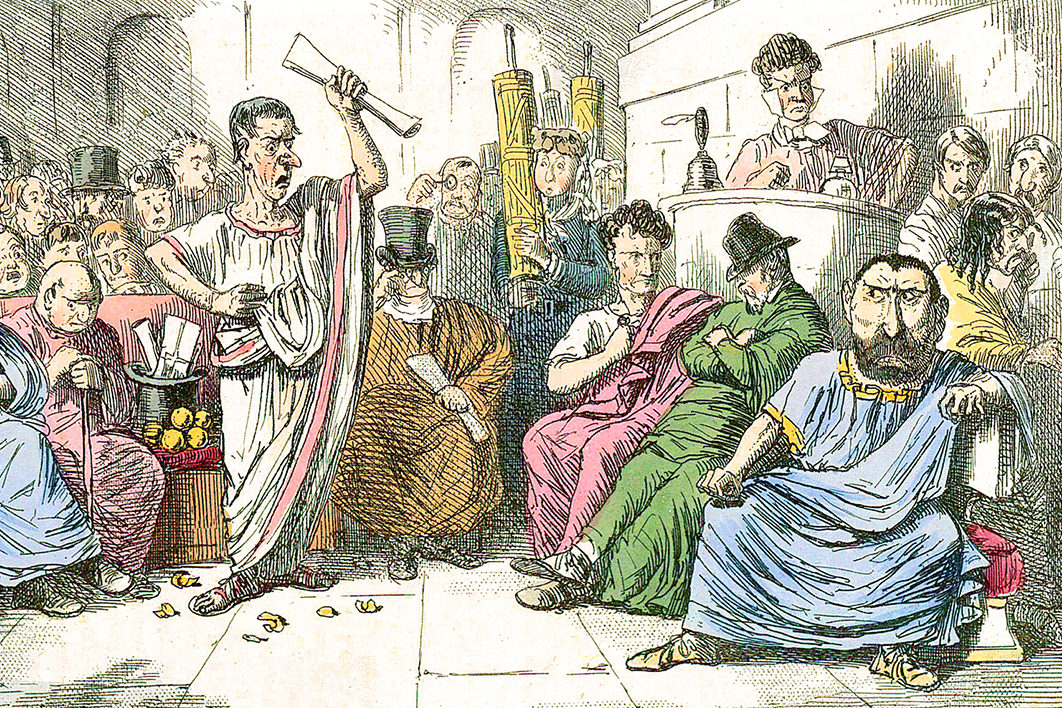 How to Tell a Joke: An Ancient Guide to the Art of Humor
By Marcus Tullius Cicero | Translated with commentary by Michael Fontaine | Princeton University Press | $29.99 | 328 pages

The Roman statesman Marcus Tullius Cicero (106 BCE–43 BCE) was by all accounts — including his own — a very funny guy. Plutarch says the great orator was addicted to laughter. Mary Beard, professor of classics at Cambridge University, calls him the wittiest Roman of them all. When his loyal slave and amanuensis Tiro finished collecting his many jokes, they took up three volumes.

Should we be surprised to learn, then, that Cicero was known as consularis scurra — translated by some classicists as the “stand-up consul” — when he ruled Rome in 63 BCE?

So let’s hear one of the jokes that built this 2000-year-old reputation for wit. (A warning: please don’t get your hopes up.)

In the street one day, Cicero overheard a would-be politician canvassing for votes. This man’s father was a well-known cook. Cicero interrupted the man’s political spiel and said, “Roast assured — I’ll support you!”

So there you have it. The dad joke was invented over 2000 years ago by the greatest orator of the Roman Empire.

The problem with Cicero’s joke is partly explained by another — thankfully, not one of Cicero’s. A Roman senator is running fifteen minutes late to the Forum. When he arrives, Cicero has the floor. The senator quickly takes his seat and whispers to a fellow senator, “Have I missed much?” The other senator whispers back, “Not much. He hasn’t got to the verb yet.”

In Latin, of course, the verb usually comes at the end of the sentence. And that’s the problem with a lot of Roman jokes, Cicero’s included: if they fail to land today, as the comedians say, it might just be that they’re funny in Latin but need explaining in English. As the American humorist E.B. White famously pointed out, “Explaining a joke is like dissecting a frog. You understand it better, but the frog dies in the process.”

For several years now, Princeton University Press’s “Ancient Wisdom for Modern Readers” series has been reducing classical texts to bite-sized chunks for the lay reader — in many cases successfully, both in the marketplace and as books. The series skilfully reworked Suetonius’s Twelve Caesars, for example, into a quick take on bad emperors that cleverly drew our attention to the many flaws of modern-day leaders like Donald Trump and Jair Bolsonaro.

The latest in the series is How to Tell a Joke, a collection of Cicero’s writing translated and introduced by Michael Fontaine, professor of classics at Cornell University. It isn’t as accessible as many of its predecessors in the series, or as much fun as its title suggests, but there’s never any harm in revisiting Ancient Rome.

Fontaine’s book draws on two sources: Cicero’s De Oratore (On the Ideal Orator) and Quintilian’s Institutio Oratoria (The Education of the Orator), a book inspired by Cicero but written a century after his death by one of his greatest fans. Neither is about how to tell a joke; each is a textbook on the art of oratory and persuasion.

Members of the Roman elite like Cicero and Quintilian were interested in humour as a rhetorical device — a weapon in the orator’s arsenal— rather than as a source of entertainment. But there’s a good reason why Cicero has popped up several times in the Princeton series: the arc of his life and reputation — as politician, philosopher, orator and writer — was so extraordinary that there is a tendency to over-quote and over-praise him. He also wrote more than three-quarters of the surviving Latin texts from that period, so it should come as no surprise that his reputation has lasted.

So, yes, he was a great man who wrote beautiful Latin and died nobly at the hands of assassins, but we don’t have to see him as a sort of Roman Jerry Seinfeld as well.

Many other important writings from Ancient Rome haven’t survived, and these lacunae — that beautiful Latin word used to describe an absence in the textual record — are all tragedies for human culture. Take, for example, the Roman performer Decimus Laberius (105 BCE–43 BCE), who was a contemporary of Cicero. He was a mimographer, which basically means he was a professional funny man. Mimes in Ancient Rome weren’t early-model Marcel Marceaus; they were more like Latin-speaking John Belushis: raucous, caustic, satirical sketch comedians who told jokes for a living to audiences made up of ordinary Romans.

Laberius was determined to be a professional jokester. By becoming a mime, he was forced to forfeit his equestrian rank (the same rank, incidentally, as Cicero’s). But all that is left of his work are the titles of forty-three mimes and a total of 178 lines. It probably goes without saying that Laberius didn’t have a slave like Cicero’s Tiro to manage his archive. Who’s to say that Decimus Laberius wasn’t the funniest Roman of them all?

Towards the end of his career, Julius Caesar made Laberius an offer he couldn’t refuse. Having vanquished his enemy Pompey the Great, Caesar became dictator of Rome in 46 BCE. To celebrate his ascension to absolute power, he forced Laberius to engage in a humiliating competition with another comic, Publilius Syrus, to see who was the funniest.

Laberius began his performance with a dignified prologue that has come down to us from antiquity. In it he addresses Julius Caesar directly — and prophetically — with the line: “Needs must he fear, who makes all else adread.” The plucky performer obviously knew that there are many reasons to tell a joke, but the best reason is simple, and dangerous: speaking truth to power.

In the end, Julius Caesar judged Syrus to be the better comic but restored Laberius to the rank he was born into. Was this a magnanimous gesture on Caesar’s part? Maybe. Or maybe it was a show of power: “Get back to your own kind, sunshine. Don’t disrupt the proper order of things.”

Some of Cicero’s many jokes were directed at the powerful too. Indeed, Plutarch argues that Cicero’s gag-happy style alienated many important Romans and contributed to his downfall. But many of his other jokes were designed to achieve power. He didn’t get to be consul of Rome just by asking.

At ninety-five, the American stand-up comedian Shecky Greene hasn’t worked for a while, but he’s still famous for two things.

He once drove his car into the fountain at Las Vegas’s Caesars Palace — appropriately, given our subject — then turned on the windscreen wipers and waited for the cops. When they arrived, legend has it, he rolled down the window and said, “No wax, please.”

Greene also had a famously fractious relationship with that equally fractious showbusiness legend, and friend of the Mafia, Frank Sinatra. In fact, it was a bit like the relationship Laberius seemingly had with Julius Caesar.

After getting beaten up by mobsters in the foyer of Florida’s Fontainebleau Hotel, Greene found the one-liner that will almost certainly be inscribed on his tombstone.

Not long after the attack, he was back on stage in Las Vegas, still bearing the scars of his recent ordeal.

I like to think Decimus Laberius, as a professional comedian himself, would have appreciated the gag. •

A Liberal’s case for the Voice to Parliament

Andrew Bragg is on the right side of the debate, but the gaps in his argument are revealing 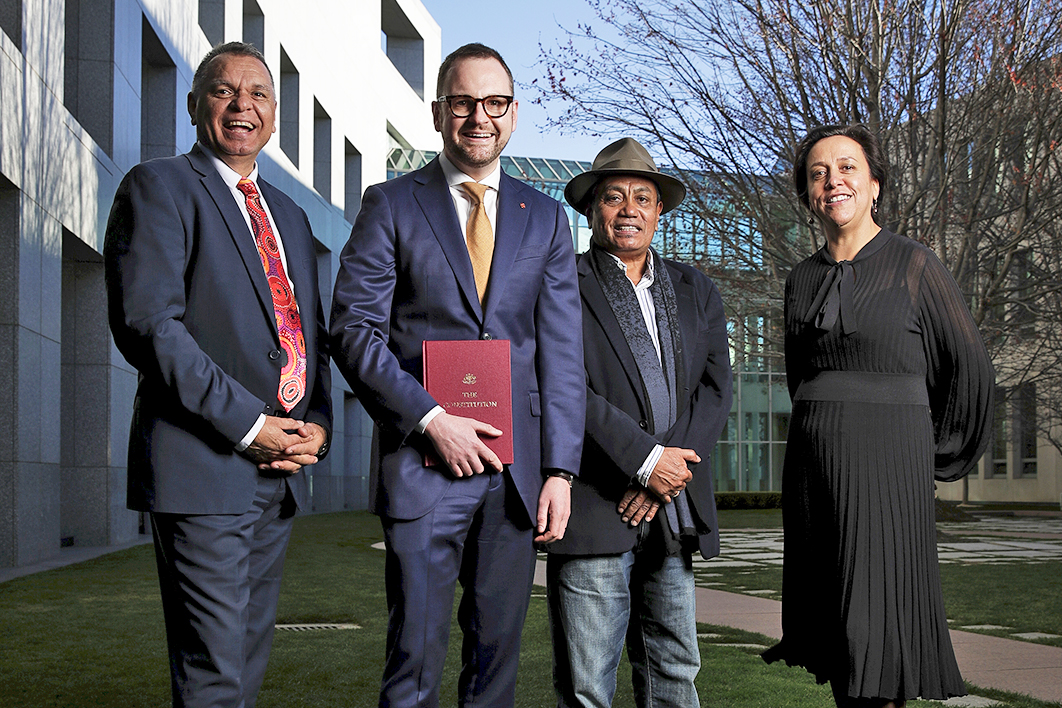