The Australian Open pivots to Asia, writes Jock Given 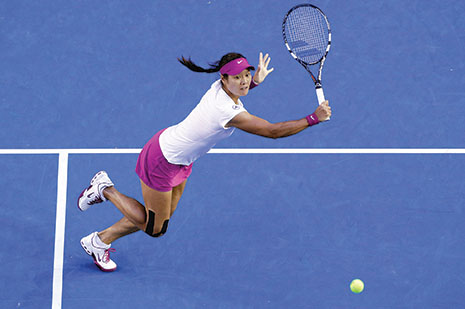 Li Na hits a return to Dominika Cibulkova during the women’s singles final at the 2014 Australian Open. Mast Urham/EPA

A MONTH after Penguin China released Li Na’s autobiography in English, the author won her second Grand Slam tournament, the Australian Open, and gave a speech instantly dubbed the “best victory speech ever.”

Thanking her team, she started with “Max. Agent. Make me rich. Thanks a lot.” Then the physio, Alex, the coach, Carlos, the husband, Jiang Shan. “Thanks for him giving up everything, just travelling with me to be my hitting partner, fix the drink, and fix the racquets, so he do a lot of jobs. So thanks a lot, you’re a nice guy. Also you are so lucky, found me.” And last, the Australian Open: “OK, now, I’d like to say thanks for all the sponsors to make fantastic tournament. I have to say again this is my favourite Grand Slam. I was so happy I can win title here.”

One of “game changer” Paul McNamee’s proudest achievements is helping to ensure the place where Li won the Australian Open carries the name of Australia’s greatest tennis player, rather than a commercial moniker like the venues nearby — Hisense, AAMI, Westpac. When Nine Inch Nails, the Rolling Stones and the Arctic Monkeys come to Melbourne in the next few months, they’ll play Rod Laver Arena, finding tennis is “front and centre, enshrined in the name of the stadium used for the sport only two weeks of the year.” Laver calls the tribute “the crowning jewel of my career.”

These three autobiographies cover three tennis generations. Li was born in Wuhan, China in 1982, McNamee in Melbourne in the mid 1950s and Laver in country Queensland in the late 1930s. Among Li’s generation, the top tennis players come from many parts of the world, although they are still rare in Asia. The top ten ranked women in the first week of February were from different countries, but fifteen of the top twenty were European and Li was the only Asian. (Sixteen of the top twenty men were from Europe and Japan’s Kei Nishikori was the only Asian.)

For Li, unlike Laver and McNamee, the Australian Open has always meant Rod Laver Arena. Her first Grand Slam tournament was the 2005 Open, where she made it to the third round. Drawn to play reigning Wimbledon champion Maria Sharapova, the match was scheduled for Rod Laver Arena. It is, narrowly, the smallest centre court at the four Grand Slam tournaments; Li found it “like the Titanic of tennis courts.” She was slaughtered 6–0, 6–2. A year later she came back and drew Serena Williams in the first round, losing again but getting a set off the then six-time, now seventeen-time, Grand Slam tournament winner. Li made the final for the first time in 2011. The following year, husband Jiang Shan was anointed “Best Husband/Boyfriend of the Year” by tournament fans.

When McNamee began life, a large share of the world’s top tennis players came from Australia. Once he was ready to try making a living from the sport, the golden age was over. Australian men won thirteen of the first sixteen Wimbledons after he was born; it was sixteen more years before another of them, McNamee’s great mate Pat Cash, did it again. By then, McNamee’s playing career was almost over and many more countries were producing top tennis players. For a time, he was the Number One doubles player in the world, winning the men’s doubles at Wimbledon and the Australian Open twice each, mainly with Peter McNamara, as the “Super Macs.” Professional tennis was now earning a lot more people a good living than it did in Rod Laver’s day; McNamee earned more than US$1.2 million in prize money.

For most of McNamee’s career, the Australian Open was held on the grass courts at Kooyong in Melbourne’s eastern suburbs. He was a member of the Australian teams that won Davis Cups there in 1983 and 1986. His last professional match was in the first Australian Open held on the new hard courts at Melbourne Park in 1988. After Pat Cash knocked him out in the third round, McNamee went straight into a second career as an event manager, setting up the Hopman Cup in Perth with Charlie Fancutt, then becoming tournament director of the Australian Open from 1994 and CEO from 1999 to 2006. That career occupies the second half of his book.

Rod Laver was one of the stars of Australia’s tennis golden era. He won big tournaments from the late 1950s to the early 1970s and two Grand Slams — all four major tournaments — in 1962 and 1969. That set him apart from all other players before and since. “From my earliest tennis memories,” writes Roger Federer in the foreword to this memoir, “Rod Laver stood above all others as the greatest champion our sport has known.” For most of Laver’s career, the Australian Championships moved around the country, before shifting permanently to Kooyong in 1972. He won national singles titles at Milton in Brisbane (twice) and White City in Sydney, but never in Melbourne.

Money presented a huge dilemma for players of that era. Turning professional meant missing the major, amateur-only tournaments. The Rockhampton Rocket — Laver — joined the pro circuit because that was where the best players were, but also because, after tennis, he “didn’t want to be forced to put my name on someone else’s sports store in Rocky, or trade in my reputation by selling life insurance, or run a pub.”

All three of these authors changed tennis. Li Na’s professional status changed after the 2008 Olympics in Beijing, when the Chinese Tennis Association allowed her and three other players to “go solo.” Instead of training, playing, touring and competing under the auspices of the national team, they were allowed to manage their own coaches, bonuses, participation schedules and income, although “a required revenue of 8 per cent and a match bonus of 12 per cent” still had to be paid to the state. Li agrees that playing with the national team and sharing resources “could protect a young player’s interests and open up more opportunities for experience,” but for “helping more mature players to compete at a higher level, this arrangement was useless.”

Laver learned to hit the heavy top spin on both the forehand and backhand sides that is now mandatory for good players, and was the first left-hander to really master the top-spin backhand. “Rodney, get under the ball and hit over it! Under and over!” his boyhood coach Charlie Hollis would shout. Decades later, McNamee suggested a late change to the sculpture of Laver at Melbourne Park: he’s now playing that signature top-spin backhand rather than a slice.

McNamee changed his own game first, then helped transform Australia’s big tennis tournaments. Mid-career, he ditched his single-handed backhand, adopting the double-hander that most top players now use. It was risky but eventually successful. His world singles ranking got as high as twenty-four, and he beat John McEnroe in four sets on Court Centrale at the French Open in 1980. McNamee’s liking for slow clay courts made him unusual in Australia. He has never forgotten the destructive pressure he felt to “serve and volley ‘like a true Aussie’” in the 1986 Davis Cup final.

Yet, as an event manager, he made it his mission to “Australianise” the Australian Open, equalising its status with the other three Grand Slam tournaments but giving it a distinctive character. “Every decision we made needed to reflect the essence of Australia — the sights, sounds and smells of our nation.” That meant changing the daily schedule so the crowd at every session got to see both men’s and women’s matches. Night-time matches were broadcast live and the women’s and men’s finals were shifted from afternoons to nights. The cheap “ground pass” was billed as the “best value sports ticket in the world.” Australian tennis legends were remembered in bronze busts around the Garden Square.

And while trying to embody the essence of Australia, the Open staged its own pivot to Asia. McNamee’s team settled on the tag The Grand Slam of Asia/Pacific after being warned off Asia’s Grand Slam by the Department of Foreign Affairs and Trade. “Technically we are not part of Asia, so this may cause some offence.” •

Jock Given works at the Swinburne Institute for Social Research.