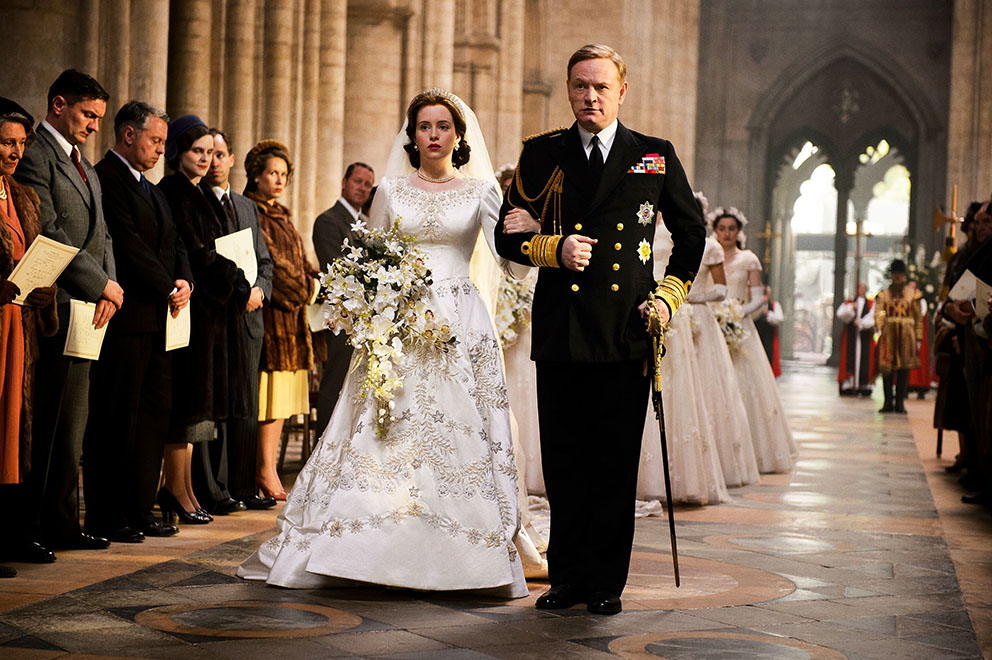 Dramatic experiment: Claire Foy and Jared Harris in The Crown.

Is it a coincidence that The Crown was released during the final phase of the US presidential election? Perhaps someone at Netflix was prescient enough to anticipate a need among viewers to take time out from the overheated exchanges, the crude language and grotesque caricatures, and to witness instead a display of white people behaving properly. If this synchronicity could have been foreseen during the making of The Crown, series creator Peter Morgan might have taken the opportunity to finish with the Queen’s first televised Christmas message in 1957, which included a sedate reprimand to those who “would have morality in personal and public life made meaningless, honesty counted as foolishness and self-interest set up in place of self-restraint.”

The Queen as a television presence has never been inspiring or charismatic. Propriety, it seems, is the best she has had to offer as a national figurehead, and herein lies the major constraint on any attempt to dramatise her story. In the 2006 film The Queen (also scripted by Morgan), the stoic self-discipline works as a counterpoint to the public hysteria surrounding the death of Princess Diana. Here, across ten episodes devoted to her early years on the throne, the challenge of that bland persona is harder to negotiate.

Claire Foy, widely praised for her portrayal of Anne Boleyn in Wolf Hall, brings the same quality of porcelain cool to the role of Queen Elizabeth but none of the flashes of vicious temperament that kept viewers and courtiers alike on edge in the Tudor royal household. Here, Foy has a more onerous task on her hands. She has to carry the series, but without any real movement across the dramatic spectrum. Her most intense scenes are concerned with the human dilemmas arising from the all-encompassing demands of her symbolic role as “The Crown,” and while there is subtlety and depth of field in Foy’s performance, there’s no edge. It is, no doubt wisely, an interpretation rather than an impersonation of the young Elizabeth, and modifies the overschooled speech and manner that make historical footage of the real Queen quite painful to watch.

As the title of the series suggests, it attempts to make the crown itself the catalyst and epicentre of the drama. It’s an interesting experiment in dramatic terms, since the crown is, as Shakespeare’s Richard II pronounced, hollow: an empty space into which each successive monarch steps to provide a temporary presence. Patrick Clair’s title sequence, with its images of the crown as an ancient and mythic artefact, evokes its turbulent and sinister history. Ropes of dark liquid gold arching across the screen and spraying into fronds suggest the violent powerplay of Game of Thrones, where gold is paid for in blood and the crown is a dangerous acquisition, to be kept only through the ruthless suppression of enemies.

There is blood in the opening scene of The Crown. King George VI coughs up a nasty spray of it into the lavatory, but as it is washed out of sight, he resumes his upright stance and steels himself for the next ceremonial appearance. The palace, with its vast, empty rooms and inescapable ranks of servants, is a place where personal decorum must be sustained at all times. Released from the ancient dynamics of claim and counterclaim, the crown in the postwar era has become a bloodless symbol of nationhood and, for the one who must wear it, a personal burden from which there is no escape. With its weight and ornateness, it was already an absurd anachronism in the mid-twentieth century.

Princess Elizabeth practises for the coronation by wearing it around the house, parading in front of her two small children. Are they amused or intimidated? From here on, it will begin to control their lives. Its constraining influence extends through the front ranks of the royal family, governing their relationships with each other and anyone else who has prospects of being admitted to the inner circle.

Philip Mountbatten, played by Matt Smith, makes his first appearance in a ceremony where he signs away his Greek nationality and inherited titles from the royal houses of Greece and Denmark, before being made Duke of Edinburgh and admitted to the Order of the Garter. He is no stranger to the bizarre dictates of sovereignty and ceremony and, apparently at least, he knows what he’s getting into.

Smith, as a former Dr Who, has undergone a renunciation of his own. No longer the dynamic action man and cult figure in the world of fandom, he has opted for some testing restraints as an actor, and stands up to them very well indeed. That wonderfully expressive face signals a wry awareness of the rules of the game, offset by a genuine human commitment to his future wife. There’s a nice moment when he helps Elizabeth through a hesitant articulation of her marriage vows, miming the dual structure of the statements – “for better, for worse” - with a dance of the eyebrows. In the earlier episodes, he’s shown as a playful and spontaneously affectionate father, a talented naval officer, an adventurer. As he is forced to come to terms with the extent to which his role in the game is subordinated, the personality begins to harden. Smith, often filmed with his back to the camera, has a way of showing the tensions held in the body as he becomes set in the mould of form.

None of the principal cast members has an easy time of it, but those of the older generation tend to come off best. The matriarchs Queen Mary (Eileen Atkins) and Elizabeth the Queen Mother (Victoria Hamilton) convey gravitas with some personal warmth, and Jared Harris has been deservedly acclaimed for his nuanced portrayal of King George VI.

If the younger royals are much harder to capture in a contemporary rendition, it’s perhaps because they were never allowed to behave as young adults. Middle age was thrust upon them. Elizabeth and her sister Margaret were put through elocution lessons that were the vocal equivalent of foot binding, and taught to walk as if they were carrying a book on their heads. Relentlessly overdressed by designers whose skills might have been better applied in advanced cake decoration, they could occasionally look pretty in spite of it all, but the public persona they were required to sustain was overwhelmingly stuffy and contrived.

Vanessa Kirby as Margaret is made to look conventionally glamorous, and the attempt to convey her as a passionate and thwarted free spirit just doesn’t wash. This is not Brideshead Revisited. Ben Miles, playing Group Captain Townsend as a straitlaced and unwaveringly dutiful officer of the royal household, looks like her uncle, and it’s really hard to see how or why their romance sparked. As the later episodes of the series revolve around the inviolable protocols that force them apart, leaving her broken-hearted and him professionally and personally devastated, the tension lines fail to catch.

The Queen’s relationships with her prime ministers are a more original and more effective focus for the narrative. There’s a fine episode about Churchill’s failure to manage an emergency response to the great London smog of 1952, which led to thousands of deaths from accidents and suffocation. It remains to be seen whether future series (Netflix, with bullish confidence, has advertised its commitment to a total of six) will take on the political complexities of the monarch’s role in parliamentary affairs.

Crowns, it seems, are strong currency in current entertainment markets. SBS is showing the first and second series of The Hollow Crown, made for BBC2 in 2012 and 2016 respectively. This is a conflated run of Shakespeare’s history plays, taking us from the deposition of Richard II through the reigns of Henry IV and Henry V in series one. The cream of British acting talent is called up, including Ben Wishaw as Richard II, Rory Kinnear as the usurping Bolingbroke who becomes Henry IV, and Tom Hiddleston as Henry V. Series two plunges into the Wars of the Roses and culminates in a seething portrayal of Richard III by Benedict Cumberbatch. I’m afraid there are no roles of comparable scope for women.

I have some resistance to television Shakespeare. Without the live action arena of the stage, it tends towards a lot of posturing and speechifying, and the convention of speaking your thoughts aloud sits oddly in a medium where the camera can virtually read the thoughts off the actor’s face. The art of television scripting is the art of leaving most things unsaid, but in Shakespeare nothing is left unsaid.

Last Sunday’s Richard II was pictorially inventive, drawing on early Renaissance tableaux to create a sense of aesthetic contrivance surrounding the terminally self-conscious character of Richard. He poses as the King, wearing his crown everywhere, even on the beach. It sort of works, largely due to Ben Wishaw’s capacity to make you want to watch everything he does with minute attention, but the play as a whole lacks impact.

Something is needed to make these plays speak to a contemporary audience (and I don’t mean giving the characters mobile phones and trying to turn them into recognisable millennial figures). The idea for a work called The Hollow Crown goes back to John Barton, a director at the Royal Shakespeare Company in the 1960s, who also created a three-part rendition of the Henry VI/Richard III cycle as The Wars of the Roses. Barton was part of the movement to revolutionise Shakespeare in almost literal terms, relating its themes to the great political crises of postwar Europe and introducing an austere approach to staging. Barton, who specialised in dramaturgical adaptation of the plays, was not afraid to strip them back to create bolder, sparser theatrical works. When his version of The Wars of the Roses was televised by the BBC in 1965, it produced shockwaves for the graphic reality of its violence, and its uncompromising evocation of a world in chaos.

Human worlds do turn to chaos periodically. Amid the legacy of the late, great Leonard Cohen is a song called “The Future,” which warns:

Things are going to slide, slide in all directions
Won’t be nothing
Nothing you can measure any more
The blizzard, the blizzard of the world
Has crossed the threshold.

Shakespeare knew about that. The government of postwar Britain knew about it, too, which helps to explain its investment in the Crown as a stabilising institution anchored deep in the history of the nation. But the way things have been going over the past couple of weeks, we may be facing another blizzard. • 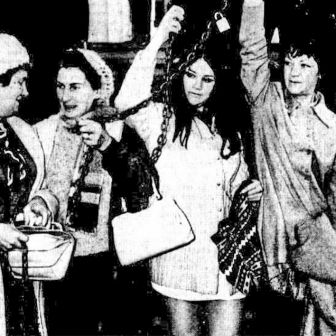 Books & Arts Gloves off Carolyn Collins 5 June 2021 Beguiled by familiar photos, have we forgotten one of the first anti–Vietnam war groups?
Close

The dog that didn’t bark

Long-term Republican supporters again turned out to support the party’s candidate, and their inevitable disappointment will help open up the possibility of change 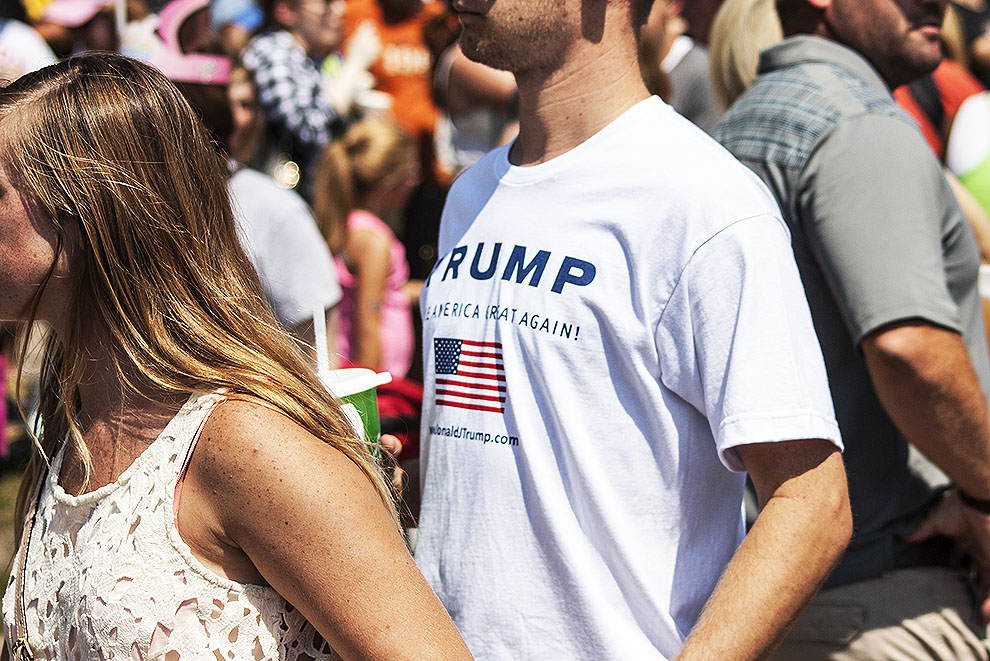