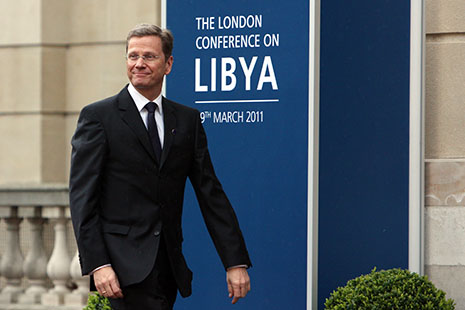 The German foreign minister, Guido Westerwelle, arriving at the London Conference on Libya on 29 March 2011. Foreign and Commonwealth Office

OF ALL the Western responses to the revolutions sweeping the Arab world, Germany’s abstention in the vote on UN Security Council Resolution 1973 must rank as one of the most contradictory. Little more than a week earlier, Guido Westerwelle, the German foreign minister, had said that any action beyond sanctions would require the backing of the United Nations and, above all, the Arab League. Yet, when both conditions were met, Germany chose to join Brazil, Russia, India and China in abstaining from the vote to impose a no-fly zone over Libya.

The decision made headlines across the globe. Its critics – this article in Britain’s Guardian newspaper is typical – charged Westerwelle with incompetence resulting from inexperience. But the most scathing assessment of the abstention came from within Germany itself. Joschka Fischer, himself a former foreign minister, called the decision a “scandalous mistake,” arguing that with its “empty words” Germany had lost all credibility in the international community and fatally undermined its campaign to secure a permanent seat on the UN Security Council. He warned that Germany could “one day wake up in a very precarious position” if it continued to isolate itself from its traditional allies – France, Britain and the United States.

Fischer accused the Merkel government of subordinating foreign policy to “provincial” politics, implying that the real reason for the abstention was not, as stated by Westerwelle, the risks associated with military action, but rather concern over upcoming state elections. Indeed, there are parallels between the German government’s shift in position on the Libyan no-fly zone and its sudden nuclear policy reversal following the Fukushima disaster. In the latter case, overwhelming public opposition to the use of nuclear power has left the government with no choice but to adapt. Fischer’s argument is that the government could and should have run the risk of making an unpopular decision in the case of Libya.

Opinion polls have confirmed that a majority of Germans agree with the decision not to send German troops to Libya. But while Merkel and Westerwelle may have saved their Christian Democrat–Liberal coalition from an electoral catastrophe, it is not clear that the abstention has gained or lost them any votes. I was at an anti-nuclear rally at the weekend and took the opportunity to ask some people about their opinions on the Libyan issue. Those who said that Germany should have got involved also made it clear that they would never vote for Merkel anyway. Many people doubted that military intervention would lead to any positive outcome for the Libyan people and saw the decision to abstain as the lesser of two evils.

Most foreign affairs experts have not gone so far as Fischer in seeing the abstention solely as an act of political survival. For Tobias Schumacher, a professor of international relations at the Lisbon University Institute, it would be more accurate to describe the decision as “primarily born out of domestic considerations” and one that “does indeed reflect a longstanding tradition in German foreign policy, namely that the latter has always tended to be a consequence of whether it could contribute to the achievement of domestic policy goals.” He points out that German society remains on the whole deeply sceptical of military intervention in any form; as Fischer himself noted, neither the Social Democrats nor the Greens have loudly criticised the abstention, and Germany’s presence in Afghanistan is unpopular.

Schumacher also wonders whether the decision may have been made with an eye to Germany’s long-term economic strategy. He draws attention to the “rather strange coincidence” that Germany has “particularly strong” economic interests in all of the countries – the so-called BRICs: Brazil, Russia, India and China – that abstained in the Security Council vote. Like other commentators, Schumacher considers that Fischer exaggerated the damage the decision has caused to Germany’s standing in the international community. “The storm is likely to pass sooner rather than later,” he says, “thereby leaving Germany in a comfortable forerunner’s position when it comes to the Chinese, Russian and Brazilian governments assigning highly lucrative orders to German foreign investors.” Schumacher also suggests that, rather than damaging Germany’s campaign for a permanent seat in the Security Council, the decision may in fact improve its chances should it ever need to rely on the vote of the BRICs.

Lending weight to the argument that the abstention was not guided purely by domestic politics is the fact, pointed out by many observers, that Germany could have supported the UN resolution without becoming involved in any military operation. Such a position would no doubt have caused less of a stir than the decision to abstain. It would also have been consistent with the stance that Merkel and Westerwelle have taken since the vote, agreeing to boost the number of German troops in Afghanistan in order to free up resources for the military action in Libya.

Germany’s economic interests in North Africa may have been an additional factor influencing the decision to abstain. Driven principally by its strategy to diversify its energy supply, Germany has recently pursued bilateral trade relations with many North African countries to become one of the four most important trading partners in the region. As Schumacher has written, these trade interests, most particularly with Algeria and Libya, have tended to take precedence over other objectives such as improving human rights and promoting good governance. Germany is not exceptional in this regard, but its trade interests do raise the possibility that Merkel and Westerwelle considered it prudent to take a neutral stance with respect to military intervention in Libya while the outcome of the Arab revolutions is still so uncertain.

The fact that the French president, Nicolas Sarkozy, took such a proactive role in the Security Council in precipitating a military response also clearly complicated matters for Germany. North Africa has been something of a testing ground for diplomatic relations between Paris and Berlin since Sarkozy proposed, during his presidential campaign in 2007, to create a Mediterranean Union that would exclude, along with the majority of EU members, Germany. That proposal did have the potential to profoundly damage both German–French relations and the equilibrium of the European Union, and Merkel undertook a long and carefully orchestrated campaign to diffuse it.

It is interesting that Sarkozy’s willingness to engage in the Libyan conflict has been subject to such little scrutiny in the English-language media. In part, this may simply reflect the fact that his position aligns with Britain and the United States. Yet, since Germany and France were united in their opposition to military intervention in Iraq in 2003, it is clearly the French who have changed their position, not the Germans. Sarkozy, who is deeply unpopular, can hardly claim a popular mandate for sending troops to Libya. In France itself, dissenting voices made themselves heard just days after the vote, led by Rony Brauman, former president of Médecins Sans Frontières, who drew attention to the hypocrisy of the British and French governments in selling arms to Gaddafi one day and then using military force to put an end to his regime the next.

Foreign policy experts generally pay no heed to claims in the press, repeated by Fischer, that the abstention could result in the end of the European Union if the relationship between France and Germany unravels. As one analyst remarked to me, the two countries have recovered from far more serious issues in the past. Schumacher makes the point, however, that the divergence between the two countries over Libya has demonstrated yet again that there is no such thing as a true and common EU foreign policy. This is only likely to become more apparent as the political and geopolitical landscape changes in North Africa. Indeed, Germany may have isolated itself from its traditional allies by abstaining from the vote on the no-fly zone over Libya, but it is clearly not alone in adopting a contradictory foreign policy in response to the waves of revolution sweeping the Arab world. •