Egypt now has to deal with the emergence of forces suppressed by decades of authoritarian rule, writes Tarek Osman 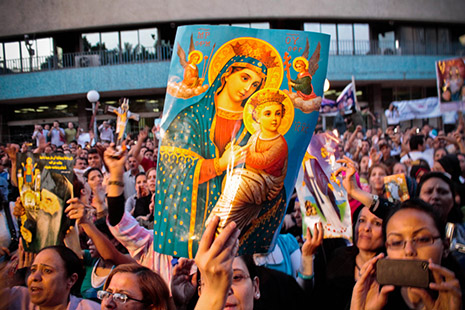 Above: Coptic Christians protesting outside the Egyptian Radio and Television Union in Cairo on 9 May, demanding the prosecution of those involved in fuelling sectarian strife in Egypt.
Photo: Maggie Osama/ Flickr

THREE months after the uprising that toppled President Hosni Mubarak, Egypt is experiencing what might be the most fluid period since the creation of the modern Egyptian state at the beginning of the nineteenth century. For the first time in almost two centuries the country lacks a central authority bent on subjugating society to its will. The groups that triggered the revolution have stepped back and a multitude of socio-political players have rushed in to exploit the political vacuum. Tensions have risen and sectarian conflict has re-emerged, fanned partly by remnants of the previous regime taking advantage of an agitated, apprehensive milieu.

The revolution of 2011 didn’t only break up the ruling authority; it also exposed the ghosts and demons that Mubarek’s regime had suppressed. Crime rates have soared and small arms have proliferated. Outlaws and criminal groups have become conspicuous in many parts of Cairo, Alexandria and other large cities. Armed attacks on police stations, not only in Egypt’s distant south but also in Cairo and major cities, have become recurring news. The caretaker government installed by the ruling Supreme Council of the Armed Forces has tried to appease different sections of society, but it lacks operational experience and, to the chagrin of many, appears subtly willing to compromise the authority of the state.

This leads into the issue that is increasingly alarming wide sections of the middle class: the rapidly deteriorating economic situation. In less than a single quarter, Egypt’s central bank lost more than 15 per cent of its reserves trying to support the Egyptian pound, a crucial step in staving off inflation in a country that imports the vast majority of its food requirements. Around a third of the foreign portfolio funds invested in the country’s capital markets have already fled. But the most severe pain has been felt by the tourism industry, with room occupancy rates collapsing to around 10 per cent in February; rates subsequently rose to the mid teens in Cairo’s hotels and the twenties in the Red Sea region, but these are still disastrous levels in an industry that directly and indirectly employs around a tenth of all Egyptians and more than 18 per cent of the workforce in the country. The latest economic growth estimates for 2011 range between 0.5 per cent and 1.5 per cent, down from close to 6 per cent.

Rising global food prices and high oil prices will add to the pain. Egypt is the world’s largest wheat importer, spending more than half of its subsidies budget (already a major component of government outlays) ensuring very low energy prices, and is increasingly facing its own energy concerns, with some industry experts projecting the country’s oil consumption to exceed production as early as 2016.

Some groups are also bent on exacting their revenge on the state, and especially on the interior ministry and police. As a result of more than three decades during which the regime relied on coercion to control its political opponents, some groups see the current situation as an opportunity to apply their own justice on their erstwhile persecutors. A series of incidents has caused dozens of deaths and injuries, especially in Al-Saeed, where some former militant groups enjoy significant support.

The country’s middle class also worries that the secular rhetoric that characterised the revolution in its first few weeks is facing serious challenges. Tens of thousands in Qena, one of the largest governorates in southern Egypt, rebelled against a government decision to appoint a Christian ex-police officer as governor. Although it isn’t clear whether the main grievance was his record at the interior ministry or his religion, the episode stoked fears that sectarianism is gaining ground.

The controversy at Qena coincided with a very conspicuous rise in the presence and influence of Salafist groups. Salafism, in simple terms, sees the society that had emerged around the Prophet Mohammed and his “rightly guided caliphs” (the first four rulers of the burgeoning Islamic empire) as a role model and frame of reference for subsequent societies. Contrary to accounts currently popular in Egypt, Salafism was not particularly persecuted by the Mubarak regime. Unlike politically organised Islamic groups, most notably the Muslim Brotherhood, Salafist groups were typically loosely organised, maintained no overtly political agendas, and often supported stability and the status quo; as such, they were usually tolerated – and in certain cases promoted – by the regime. For decades they have enjoyed wide appeal in the lower classes of Egyptian society, which tend to endorse relatively conservative lifestyles.

Over the past three months the rhetoric of Salafists hasn’t changed fundamentally, but their presence has became more obvious. Like most social movements, they are trying to use the current fluidity as an opportunity to promote their thinking. When the March referendum on the Egyptian constitution became an open political battle on the future orientation of the country, many vocal liberal groups warned of “the peril of a potential Islamic state in Egypt.” Some Salafist groups directed their members and asked their sympathisers to vote against “the discarding of religion.” The war of words, mostly distorted and irrelevant to the issues on which the referendum turned, spiralled. Some Salafist groups also proved to be savvy marketers, able to draw wide media coverage. The often inflammatory rhetoric and the dramatic rise of the entire Islamic movement in Egypt in a very short period exacerbated the concerns of wide sections of the country’s middle class that their revolution was being hijacked.

There is a lot of theatre in this. All political players in Egypt realise that the country is entering a new era with massive political and economic prizes up for grabs. Some entrenched power centres in Egypt aim to protect their interests; other groups detect very lucrative opportunities and are keen to exploit them; and some individuals are positioning themselves for future ministerial or other executive roles.

Political noise – with very different players with very different narratives crisscrossing and tactically thwarting each other – is also a growing feature of Egypt’s political landscape. This is hardly surprising. For decades, governing regimes sidelined all political players and potential challengers. Despite his immense appeal during the late 1950s and the 60s, Gamal Abdel Nasser never allowed genuine political representation through free elections. His successors experimented with a multi-party system, but neither Sadat nor Mubarak allowed a real pluralist system to emerge. Their political vehicle, the ruling National Democratic Party, ruled supreme and effectively uncontested. In the last two decades of President Mubarak’s reign, he – and the capitalist elite that had merged with his administration – allowed the semblance of a dynamic political system. But opposition parties and groups were closely watched, harassed and never allowed to evolve into viable challengers. The system also lacked any serious checks and balances. Now that that system has disintegrated, many of these previously browbeaten players are making the most of the newly found freedom – and some are exploiting it.

Theatre and noise aside, there are indeed genuine concerns. Egypt’s 2011 uprising has unleashed frictions that had been suppressed by a strong, central government. Different players with very different outlooks have been let loose in a highly fluid sociopolitical milieu, with an economic situation susceptible to shocks – an alarming situation that threatens stability. The revolution is also directionless: the sole common denominator that unified the groups that came together in Tahrir Square and other public spaces was the removal of President Mubarak. Now, the stalwarts of his administration are being investigated and many have been imprisoned. As the previous regime has faded into oblivion, the founding constituents of the revolution have come apart.

This fragmentation would have been healthy if there were an overarching political frame of reference that all players could respect and accept; but there isn’t one in Egypt at the moment. The ruling Supreme Council of the Armed Forces is keen to assure all observers, within and outside the country, that it respects civilian rule and that it is entrusted to administer as opposed to reign over the country. Because of the intensity of most Egyptians’ loathing for the Mubarak administration, the new government is very reluctant to use ministers who had served under the previous regime. This situation has created a disconnection between the very recent past and the present, which causes perplexity and confused decision-making.

And yet increasingly Egyptians are drawn into the public sphere. Newspaper circulations have boomed over the past three months. Political books, which typically yielded poor sales in Egypt, are the new literary fashion. Numerous civic society groupings have emerged. On the economic front, three new investment banks have been set up since the onset of the revolution; the founders are Egyptians who used to work for international financial intermediaries in London and New York and who see beyond the current turbulence to a time when Egypt will enjoy the most populous democracy, the most diversified economy and the largest reservoir of talent in the Middle East and North Africa.

The current fluidity will undoubtedly give rise to new sociopolitical narratives. Religious conservatives will thrive for a while; some old power centres will reinvent themselves and retain some of their privileges. Many of the young who spent days and nights in Tahrir Square in January and February will feel disappointed; millions from Egypt’s sprawling middle and lower-middle classes will see the revolution as a watershed and the start of an era loaded with challenges, rather than as a social panacea. But crucially, Egyptian society faces a fork in the road.

Egypt is trying to deal with a rich agenda – which political system to adopt, which economic challenges to confront, how to address social inequality and corruption, how to bring about a rejuvenation of foreign policy. This moment could serve as a political stage on which Egypt’s different players and movements could present themselves to the country’s massive middle and lower-middle classes. This huge demographic block could then have the chance to reflect on what these movements’ different projects might mean for their future – and that would be a healthy exercise presaging a potentially strong democracy, even if its immediate consequences entail economic shocks. But the fluidity could also portend chaos. Turmoil and disorder are often less the result of bad intentions than the natural outcome of having a score of players with interweaving power bases but very different objectives. The outcome will be determined by the maturity, choices and will of the country’s middle classes. •

Tarek Osman is the author of Egypt on the Brink: From Nasser to Mubarak (Yale University Press, 2010).

Books & Arts Oil and water Matthew Gray 23 March 2011 An important new book helps explain why Saudi Arabia is unlikely to experience the same upheavals as some of its neighbours, writes Matthew Gray
Close

The United States’ racial and ethnic makeup is changing, but the real divide may end up being along income lines, writes Lesley Russell 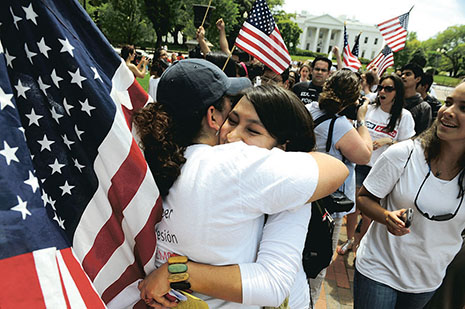