Ghosts of politicians past

As the latest carbon price package makes its way through parliament, Fergus Green takes a trip down memory lane 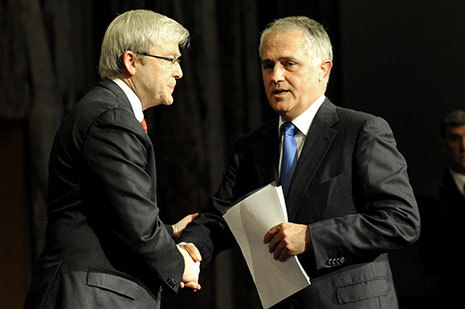 CAST your mind back two years and you’ll recall that the government and opposition were in another, albeit very different, debate over carbon policy. Back then, Kevin Rudd was prime minister, Malcolm Turnbull was opposition leader, and the balance of power in the Senate was split across the ideological spectrum. The debate was about what would be “in” and what would be “out” of the Carbon Pollution Reduction Scheme, who would be compensated and by how much, and what the targets and caps would be. There were party-room spats and leadership spills and vitriolic slanging matches in the Senate.

Compared with that high political drama and detailed policy wrangling, the introduction of the current carbon pricing package into federal parliament was a remarkably routine affair. The only differences between the new bills and the draft legislation released in late July were minor technical changes to improve the administrative workability of the scheme. Likewise, the draft legislation mirrored almost precisely the policy package released by the government a few weeks earlier.

Part of the reason for this new-found policy stability lies in the fact that Tony Abbott has no interest in having a policy debate; he simply wants to destroy the scheme. But there are plenty of industries (and unions) with the ear of government who are interested in the policy’s content and are calling for it to be weakened. It is the political reality of the minority government — the need to maintain the support of all members of the multi-party committee if the bills are to pass through parliament — that explains why these calls have fallen on deaf ears. This process has shielded the current scheme against political erosion.

But many of the elements that have found their way into the Gillard package are products of murky backroom deals done by her predecessors during negotiations over the previous scheme, when no such shield existed. It’s timely to trace some of these more odious elements back through the Rudd government’s carbon pollution adventures, as we give thanks for the fact that the multi-party process prevents the government from diving yet deeper into the pit of compromise.

The most egregious examples of backsliding relate to the compensation given to energy- and emissions-intensive industries that would (so they claim) be specially affected by the imposition of a carbon price. The first type of industry compensation covers those entities that are exposed to international competition. In the government’s 2008 Green Paper, this type of assistance was proposed on the ostensible grounds of avoiding “carbon leakage” — the movement of production overseas without any reduction in carbon emissions — resulting from the carbon price. Entities would be eligible for free permits to the extent that they conducted specified activities (aluminium smelting, for instance) and passed certain thresholds. A handful of activities were proposed for compensation and these were grouped into two categories: the highly emissions-intensive and the moderately emissions-intensive. In the first year of the scheme (which was then proposed to commence in 2010) those in the former category were to be compensated for 90 per cent of their annual direct and indirect exposure to carbon pricing, and those in the latter compensated 60 per cent, with both figures declining at a rate of 3 to 5 per cent each year.

Intense industry lobbying after the release of the Green Paper ensured that every aspect of this regime was weakened immensely. The White Paper, released within five months, proposed substantially broader eligibility thresholds, ensuring the LNG industry and all steel manufacturers would now receive assistance, while industries that didn’t make the cut would receive cash grants — of $750 million in the case of the coal miners. The duration of assistance was extended and its rate of decline curbed.

Then, as the storm clouds of the global financial crisis gathered in early 2009, Kevin Rudd announced that the previously proposed assistance rates were to be boosted with a five-year “global recession buffer,” meaning that the highly exposed industries would now receive a whopping 94.5 per cent of their permits for free, and the moderately exposed industries 66 per cent. (Rudd also announced a one-year delay in the start of the scheme, among other industry-friendly changes.)

In the desperate negotiations with the Malcolm Turnbull–led opposition to get its floundering carbon bill passed by the Senate in November 2009, the government made a swathe of further concessions. The LNG industry would receive a “top-up” allocation of permits, the cash for coal mines would double to $1.5 billion (the opposition wanted coal mining excluded from the scheme altogether), there would be further handouts to steelmakers and other manufacturers, and assistance levels would be “frozen” at the pre-global-recession-buffer levels (of 90 per cent and 60 per cent respectively) unless other countries introduced “comparable carbon constraints” on their industries. The extension of the “global recession buffer” out to 2020 summed up the nature of the whole exercise.

Most of these changes have been smuggled into the current scheme. The starting assistance rates still include the “global recession buffer” (though they’ve stopped calling it that). The government proposes to splash $1.33 billion on “gassy” coal mines and additional cash and free permits on the steel sector (though the Greens oppose these measures), while less-exposed manufacturers will also get a sprinkling of cash to buy more energy-efficient technologies. On top of that, a modified “comparable constraints” test for freezing assistance rates has been carried over into the trade-exposed industry assistance program in the current bill, formalising industry’s calls for a “level carbon playing field” between them and their competitors.

As the Grattan Institute has shown, that “level playing field” is an artificial one, and the compensation proposed in its name would be well in excess of what’s required to avoid carbon leakage from all but a small minority of production facilities. The result is a transfer of wealth from taxpayers to eligible industries, and a much higher emissions reduction burden (and therefore carbon price) on the rest of the community than is necessary to retain industries in Australia without expanding their emissions footprint. But this debate stopped being about carbon leakage a long time ago.

When it comes to fudging the rationale for industry assistance, however, nothing beats the pretexts advanced for helping coal-fired power generators. Generators are treated differently from the other assistance categories because they are not “trade-exposed”: supplying Australians with electricity can’t be done from overseas, so no one can even pretend there’s a risk of carbon leakage. Rather, the issue in this case has to do with the especially large exposure of some generators — particularly those in Victoria’s Latrobe Valley using brown coal — to a carbon price.

This exposure has given rise to numerous rationales for assistance. All of these were canvassed in the 2008 Green Paper, the main ones being “compensation for losses”/“fairness,” “policy risk” and “energy security.” The government dismissed most of these but expressed a preference for providing an unquantified amount of assistance based on the “policy risk” rationale. All of these were later compellingly dismissed by the government’s chief climate policy adviser, Professor Garnaut.

But the gravy train had left the station. The “policy risk” rationale was entrenched in the White Paper, this time with a figure attached: the most emissions-intensive generators would net around $3.5 billion in free permits over the first five years of the scheme. This wasn’t enough for the Turnbull-led opposition, which demanded that taxpayers cough up $10 billion over fifteen years for the sector. In the end, the Rudd government agreed to $7.3 billion in free permits over ten years. By that stage, there was no pretence that this quantum of largesse was necessary to mitigate “policy risk.”

Under the current package, the assistance to the industry has been wound back somewhat to a cool $5.5 billion over five years. There’s no telling whence that number was plucked. It certainly isn’t calculable on the basis of any transparent rationale: the objects of the coal-fired electricity assistance package in the current bill are a veritable fudge factory. “Energy security” has made a comeback, receiving top billing as the overarching objective of the assistance scheme, despite any risks on that front being more than adequately catered for with the establishment of the Energy Security Council and a new provision for emergency government loans to distressed generators. That object is buttressed by two sub-rationales: to “help generators that face sizeable losses” in their asset values; and to “support investor confidence, and underpin the investment in generation assets that is required to ensure that Australia’s future energy security needs are met.” This is three varieties of fudge mixed in together.

A CRITICAL design element of any emissions trading scheme is sectoral coverage: which greenhouse gas emitting activities will attract liability to pay the carbon price? In a trading scheme with a fixed annual cap, the more industries that are part of the scheme, the more opportunities there are for abatement and the lower the carbon price will be for all those who have to pay it.

Agriculture is one of Australia’s highest-emitting sectors, responsible for some 15.5 per cent of total emissions in 2009 (mostly methane emissions from ruminant livestock). It is often forgotten that the Rudd government initially proposed to include these emissions in its scheme, albeit from 2015 when it expected some of the micro-level measurements to become sufficiently accurate.

One of the key demands of the opposition — particularly the National Party — was to exclude the agricultural sector from any liability whatsoever for its emissions while giving it the opportunity to generate “offsets” by removing additional carbon from the atmosphere (through better soil management and planting trees, for instance). Farmers could then sell these offsets to the suckers who were still liable under the scheme. In other words: all carrot, no stick.

The government capitulated to this demand in its negotiations with Malcolm Turnbull and Ian Macfarlane in November 2009 — and that’s largely the way it’s stayed. The current package excludes agriculture from any form of carbon price liability or other mandatory abatement scheme. Meanwhile, the “carrot” approach forms the basis of the government’s Carbon Farming Initiative. Despite the potentially devastating medium-term impact of global methane emissions, Australia’s major parties are content to treat on-farm abatement as a frilly add-on.

A final major exclusion from carbon pricing is the 8 per cent of Australia’s emissions that come from passenger and light commercial vehicles. To trace the origins of that little carve-out we have to go all the way back to the first half of 2008, when global fuel and food prices were at record levels and Brendan Nelson, then opposition leader, was fanning Australians’ bowser rage and demanding that the Rudd government remove petrol from its then-hypothetical scheme. Of course, the global recession took hold and oil prices dropped sharply — but, as we’ve seen, once loopholes and handouts find their way in, they have a habit of staying there.

The current package contains some significant, albeit fairly marginal, improvements on its ill-fated predecessor, thanks largely to the Greens’ efforts to improve the environmental and economic integrity of the policy. As this re-run of the carbon rollercoaster of 2008–09 has shown, however, the ghosts of Kevin Rudd, Penny Wong, Malcolm Turnbull, Ian Macfarlane and even Brendan Nelson will haunt this scheme for years to come. •

Fergus Green is a climate change lawyer and policy analyst. He writes each month for Inside Story.