Giving back to Vanuatu

Coming on top of recent volcanic activity, Cyclone Harold and Covid-19 are a dual challenge for the island nation 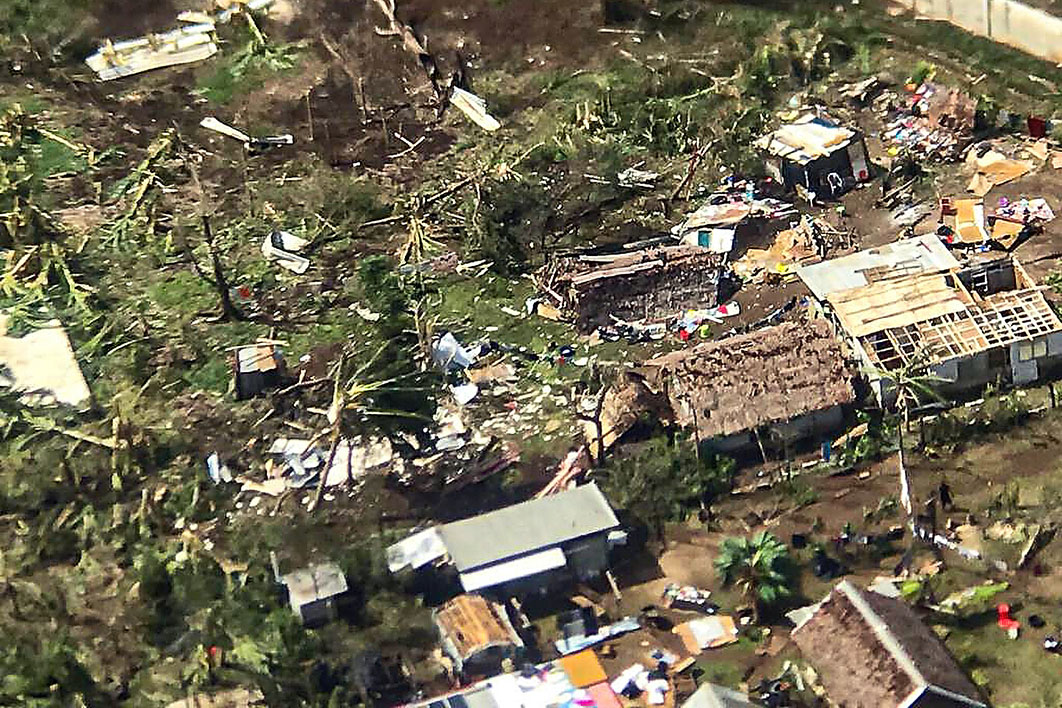 When unprecedented bushfires raged in Australia early this year, the government of Vanuatu was swift to send aid. Now, just a couple of months after that generous act of empathy, Vanuatu is dealing with a crisis of its own — or rather three crises: Cyclone Harold, the category 5 tropical system that devastated islands in the north on 6 April; the widespread ashfall from the Yasur volcano on Tanna; and the threat of Covid-19.

In response to the last of these developments, the Vanuatu government wisely closed its borders on 26 March, and promoted social distancing by closing kava bars and restricting large gatherings and domestic travel. No confirmed cases of Covid-19 have so far been recorded.

Foreign aid flowing into the country in response to Cyclone Harold — especially from Australia, which has given $4 million to date — has been subject to strict quarantine controls to prevent contamination. Recognising the risk of the spread of coronavirus, which would overwhelm its fragile health system, the Vanuatu government has restricted arrivals of foreign personnel and is relying on local capacity.

The unenviable task of dealing with the impact of Cyclone Harold amid this unprecedented cascade of disasters has fallen to the National Disaster Management Office. In severely affected areas, the NDMO’s work is complemented by the Vanuatu Climate Action Network, a consortium of resident non-government organisations in Vanuatu, under its secretary, Willy Missack. To the extent that resources allow, local relief efforts have successfully stepped up, but far more funds are needed not just to deal with the immediate need for food, shelter and water but also to assist the process of rebuilding and recovery, which will take months and years.

The parts of Vanuatu’s northern islands most severely affected by Cyclone Harold have only started to receive aid over the past week or so. With communications being slowly restored, we have been receiving heart-wrenching images of utter devastation. Early, we saw aerial shots from flyovers surveying the damage on Pentecost island and a long drive-by video showing the widespread damage in Luganville town, Espiritu Santo. Friends sent images of their houses with roofs missing, walls breached and rice supplies ruined. About 60 per cent of all dwellings were seriously affected and even major concrete structures were crushed. Particularly shocking are recent reports from the remote west coast of Santo Island.

At Melsisi, in central Pentecost island, the magnificent Catholic church, the largest in all of Vanuatu, was reduced to a rubble of wood, twisted iron and concrete. Only its magnificent back wall, with its rainbow cross and brightly painted altar, still evokes the church’s former glory. Two deaths were reported on Pentecost, an elderly woman at Lekaro village in the central region and a younger woman from Melsisi who was sheltering with others in the church hall when a concrete wall collapsed. Everywhere, houses made of concrete and corrugated iron succumbed. Homes made from local materials — plaited bamboo and sago palm thatch — were quickly swept away. A series of images showed the sweep of destruction down the island’s west coast, at Melsisi, Barvet and Waterfall in the central region, and in every single village in the south — clinics, schools, churches and homes all obliterated, the coastal road washed away and the mobile phone tower at Lalwori lying like a crippled praying mantis.

Newly elected south Pentecost MP Marc Melsul describes the remains of that west coast road strewn with boats, hurled up hundreds of metres from the coast. A recent helicopter survey revealed no more than a handful of buildings intact in any village in the south. “In most villages, almost every building is gone or it’s a heap of rubble,” the MP says. “Our region is totally destroyed. Crops, houses, bamboo and sago palm groves for housing construction and almost every piece of infrastructure — all gone.”

Images and reports began to emerge from the more remote southeast of Pentecost a week ago. The area is further from airports and roads, and the swells of the ocean on the east coast can be savage at any time. The road from Lonorore airport on the central west coast — a dangerous but stunningly scenic drive through rainforest and ravines surging with water — passes over the southern highlands and ends at Ranwas village in the southeast. Reuben Bong, a Penama provincial councillor from Bunlap and Londar, reports that almost every house in the twelve kastom villages has been damaged or totally destroyed.

“We are picking up what food we can find on the ground from our damaged gardens,” he says. “Our yam gardens, almost ready for harvest, are now destroyed. The food we have now will only last a week or two then we don’t know what will happen. The young men are collecting water from mountain springs in plastic containers, but we are fearful of landslides.” In his most recent communication, Bong stresses the villagers’ urgent need for food, tarpaulins and building tools. What remains of the damaged food in their gardens is starting to rot.

Nearby, the beautiful Church of Christ village of Ranwas, nestled on the southeast coast, has been utterly devastated. But the Ranwas School building, recently built to cyclone code with assistance from a joint British and ni-Vanuatu non-government organisations, the Tanbok Project, has survived. Similarly, school classrooms at the Catholic community of Bay Barrier, damaged by Cyclone Pam five years ago but restored and cyclone-proofed with assistance from the Rotary Club of Byron Bay, has also survived. About 400 people crammed into the classrooms during the tempest.

Providing much-needed solace was a batch of non-food aid — shelter kits, cooking utensils, blankets — sent to Pentecost by the Red Cross on 11 April. More food aid is desperately needed. Vanuatu’s director-general of climate change, Esline Garaebiti, confirmed on 14 April that the NDMO was loading ships with food supplies for severely affected areas. On Easter Monday, a delegation from the FRANZ partnership, which coordinates Australian, New Zealand and French aid, visited a number of villages on the west coast of central Pentecost.

Meanwhile, some of the people from Pentecost living in Port Vila have formed their own South Pentecost Disaster Committee, chartering a private helicopter to survey the damage and a boat to send supplies of rice, water and fuel to kin in south Pentecost. Fuel will be crucial to power the chainsaws needed to clear debris and rebuild. But the logistical challenges are enormous, especially in the isolated villages of the southeast, which we have visited and lived in over decades, receiving warm hospitality and welcome engagement with our linguistic, anthropological and community development projects.

In recent years many regional communities in Australia have formed mutually beneficial relationships with seasonal workers from Vanuatu, who come each year to work on fruit and vegetable farms and, more recently, in the tourist industry. We now have a chance to go some way towards repaying the enormous debt we owe to the people of Vanuatu.

We plead with the professionals involved in the disaster response, the newly formed government of Vanuatu headed by prime minister Bob Loughman, and especially the Australian government to give more and deliver it as quickly as possible to all those severely affected. This disaster obviously comes at a difficult time for the Australian government, whose attention is focused on the coronavirus pandemic. But given the billions being spent to protect our way of life, we sense that Australia could afford more than the $4 million presently committed. We may be isolated at home because of Covid-19, but thousands of people in Vanuatu have been left with no homes at all.

The aid currently promised is only one-tenth of the amount given five years ago after Cyclone Pam, also a category 5 system. With almost 40 per cent of Vanuatu’s population affected by this current crisis, the need is just as great. Historically, storms of this destructive power have occurred in Vanuatu, on average, every twenty-five years, but two powerful category 5 cyclones within five years is consistent with what climatologists have recently predicted. If Australia is serious about its “step up” in the Pacific, this is the moment to take a leap. •

Murray Garde and Margaret Jolly are researchers in the School of Culture, History and Language, College of Asia and the Pacific at the Australian National University.

“My God, it would have been easier than I thought”

The Gallipoli campaign wasn’t the pointless disaster of Anzac mythology

The lucky ones? Wounded Anzacs arrive back in Sydney from Gallipoli. 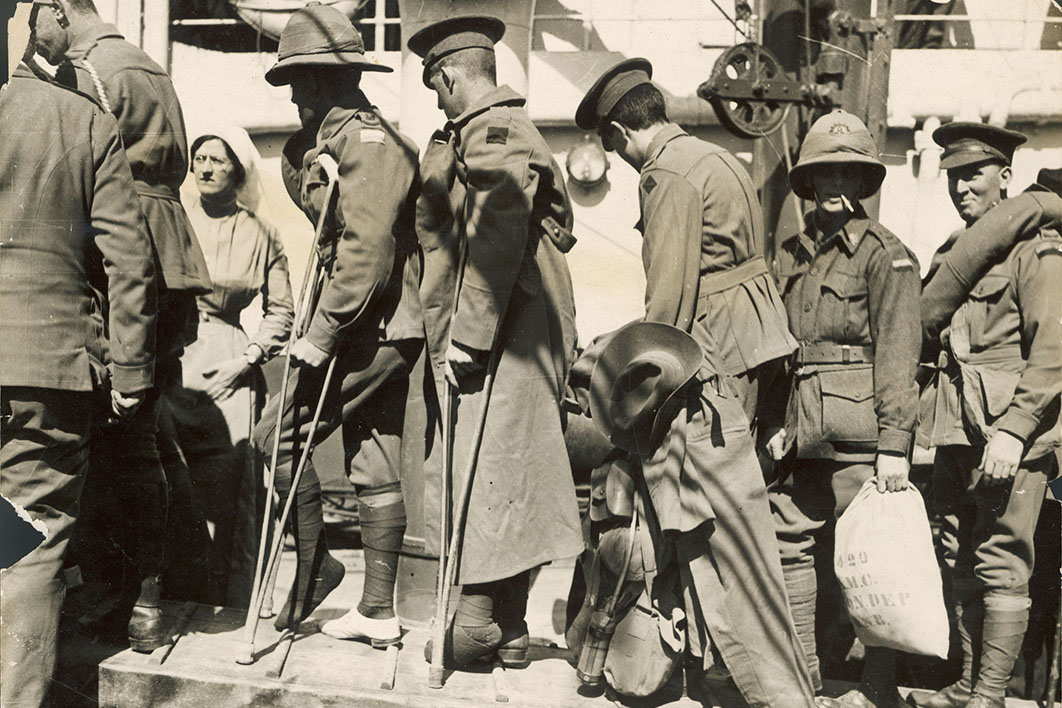 The lucky ones? Wounded Anzacs arrive back in Sydney from Gallipoli.