Australian suffragettes played a sometimes flamboyant role in the fight for the vote, at home and in Britain 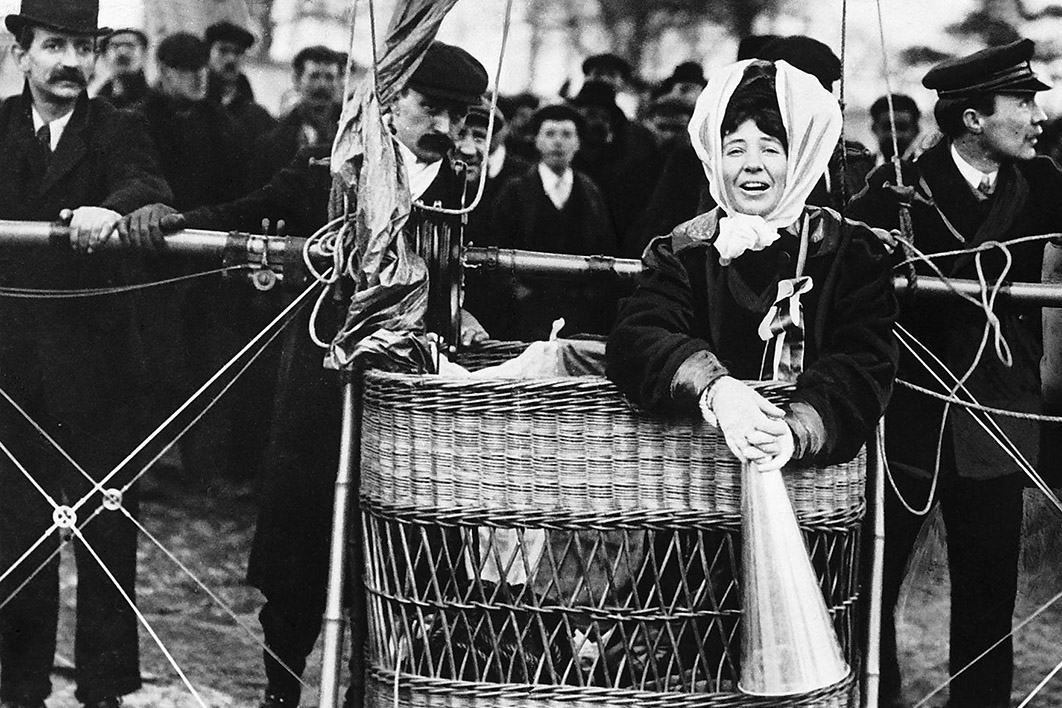 Risk-taker: Australian suffragette Muriel Matters promoting the cause in the basket of a hot air balloon emblazoned “Votes for Women.” Trinity Mirror/Alamy

You Daughters of Freedom: The Australians Who Won the Vote and Inspired the World
By Clare Wright | Text Publishing | $49.99 | 553 pages

“I am perfectly certain that I could not do worse than some of the men you have sitting in parliament.” A defiant statement decrying the lack of women in the current government’s ranks? No, this is suffragist Vida Goldstein making her pitch for a seat in the Victorian Senate to a crowded audience in country Korumburra in 1903.

Though unsuccessful in her several bids to become the first woman elected to an Australian parliament, Vida was one of the inspiring women who gave their all to the cause of women’s rights in the early years of the twentieth century. They were patronised by conservative politicians (“I consider the qualifications of the ladies are already sufficiently charming”) and ridiculed and vilified as members of “the shrieking sisterhood,” but I suspect they would be surprised that we are still fighting for equal parliamentary representation more than a century later.

The publication of the second volume of Clare Wright’s Democracy Trilogy could not be more timely. A big book with a long title and a cast of thousands, You Daughters of Freedom relates with sparkle and wit the largely untold story of the trailblazing women who not only dragged recalcitrant male leaders into the new century and won the right to vote but also were at the forefront of the struggle for women’s enfranchisement internationally. In 1903, pipped at the post only by New Zealand, South Australia led the way, providing a crucial stepping stone at a time when “the convergence of feminism and Federation produced the perfect storm for democratic reform.” It would be more than two decades before Britain followed suit.

“Crafting the story of the nation has always been women’s work — on the ground, if rarely in history’s written page,” observes Wright. She takes the huge women’s suffrage banner (2.5 metres high and 1.4 metres wide) that hangs behind glass in Parliament House in Canberra as a framing device for her book. Designed and painted by Australian artist Dora Meeson Coates in London, and carried in suffrage “monster marches” in 1908 and 1911, it depicts Mother Britannia with daughter Minerva stretching out her hand as if to say, “Join me.” Beneath the words “COMMONWEALTH of AUSTRALIA” is the message “TRUST THE WOMEN MOTHER AS I HAVE DONE.” (The newspaper reports all added the missing commas, I’m pleased to note.)

Wright does excellent craftwork herself, skilfully weaving the stories of five prominent women involved in the Australian suffrage movement into the larger tapestry of the international struggle for women’s enfranchisement. The eldest two of those women were born in England in the 1850s but settled and married in Australia: upper-class Dora Montefiore formed the Womanhood Suffrage League in New South Wales in 1891; and the vivacious Nellie Martel, daughter of a blacksmith, founded the Women’s Progressive Association in the same state in 1901.

Two others, Vida Goldstein and Muriel Matters, were also contrasting figures. Tall, elegant Vida, “daughter of the Victorian squattocracy,” became the first Australian to meet an American president at the White House, where she charmed Teddy Roosevelt while on a speaking tour in 1901. Muriel, born in South Australia in 1877, the third of ten children, was the youngest of the protagonists; a talented actress with “impish charm,” she was the epitome of the independent “Australian girl.”

Making up the five is the artist and creator of the banner, Dora Meeson Coates. Long-faced and serious, she studied art at the National Gallery of Victoria, where she met her future husband George Coates, a “solemn boy.” After a period studying in Paris in 1897, the pair married, both aged thirty-four, and settled in England.

The five women extended their range of activities from Australia to London, where they took part in the suffragettes’ passionate activism of the new century. Demonstrating women were physically abused, imprisoned and force-fed; some, like Emily Wilding Davison, died. The women from the Antipodes used their position as vote-carrying Australians to support the cause.

In an almost hilarious episode known as the Siege of Hammersmith, the property-owning “globe-trotting socialist possum-stirrer” Dora Montefiore, who had a penchant for cocaine lozenges, refused to pay “the King’s taxes” because she could not vote. Having been stripped of much of her furniture and silverware by the bailiffs, she addressed an auction room she had packed with suffragists and women’s rights activists, thus creating “a brilliant publicity stunt.”

The flamboyant “elocutionist” Nellie Martel arrived in London in 1904 and joined with Emmeline Pankhurst in starting the London branch of the militant Women’s Social and Political Union, or WSPU. During demonstrations over the ensuing years they were pelted with vegetables, snowballs and even stones; on one occasion, Nellie and Emmeline were attacked by a group of young men, grabbed by their throats and beaten, fearing for their lives. Nellie also spent time in Holloway prison.

Muriel Matters came to London in 1905 to further her acting career. Caught up in the fervour of the time, she became known for actions that put her at great personal risk, chaining herself to the iron grille that separated the Ladies’ Gallery from the House of Commons chamber in 1908 and taking to the sky over London in a hot air balloon emblazoned with “Votes for Women,” from which she rained leaflets on the crowd below.

Vida Goldstein worked mainly in Victoria, campaigning throughout the state during her bids to enter parliament. But in 1911 the WSPU invited her to London, where she was received to overwhelming acclaim, addressing the suffragettes in a much-publicised address at the Royal Albert Hall.

Living in London, Dora Meeson Coates helped found the Artists’ Suffrage League with artist Mary Lowndes. The Actresses’ Franchise League was formed a year later, and Dora became friends with Cicely Hamilton and other women, thriving on the “feeling of solidarity, belonging and sisterliness” that helped her endure her “sometimes suffocating marriage.”

Wright mentions the much-noted absence of women of colour from the 2015 feature film Suffragette and discusses at length the appallingly racist debate about excluding Indigenous people from the vote in Australia, a decision implicitly condoned by suffragist women. But the exclusively heterosexual lens through which she views the women of You Daughters of Freedom overlooks another element of the suffrage struggle, namely, the importance of the many women who joined female partners in often lifelong relationships.

These relationships flew under the radar for good reason, since a chief aim of the female franchise was to purify politics and uphold the innate sex superiority of women claimed by the suffragists. The concept of an idealised motherhood, a civic motherhood, was a central plank of the movement.

Dotted through the book are the names of British women — Mary Lowndes and Ethel Smyth among them — who are known to have loved women. Closer to home, but not discussed, two of the most senior office-bearers in Vida Goldstein’s Women’s Political Association enjoyed a lifelong partnership, while the pages of Vida’s journal, the Woman Voter, included articles such as “Spinsters Indispensable” celebrating the unmarried state.

Four of the five protagonists of the book married, and their unions are discussed at some length, but Vida Goldstein is simply described by Wright as “a public woman” who “lived and breathed politics.” She might have “turned down marriage proposals like a housekeeper turns down sheets,” but her particular friendship with her WPA business secretary Cecilia John has been noted by other feminist scholars. The two women travelled together to Europe in 1919 and then parted ways, but Cecilia later lived with a female partner in England.

Feminism is a moving feast and, while the first wave’s emphasis on women’s purifying influence might now seem wowserish, the second wave of the 1970s and 80s coincided with a general drive for liberation (women’s liberation, gay liberation, sexual liberation) that was able to include lesbian relationships positively. The zeitgeist is different again today, with the passing of same-sex marriage legislation and the rise of the #MeToo movement.

Clare Wright’s timely book sheds light on a neglected chapter in the story of Australian democracy and women’s place in it. On the world stage, whether garbed in the white, green and purple suffragette colours of the last century or sporting pink pussy-eared knitted hats in the twenty-first, women continue to march for their rights. •

Sylvia Martin is the author of three biographies, one of which, Ida Leeson: A Life, was awarded the Magarey Prize for Biography in 2008. Her latest book is Sky Swimming: Reflections on Auto/biography, People and Place (UWA Publishing, 2020).

If altruism won’t motivate Australia to increase spending on eradicating tuberculosis, how about self-interest? 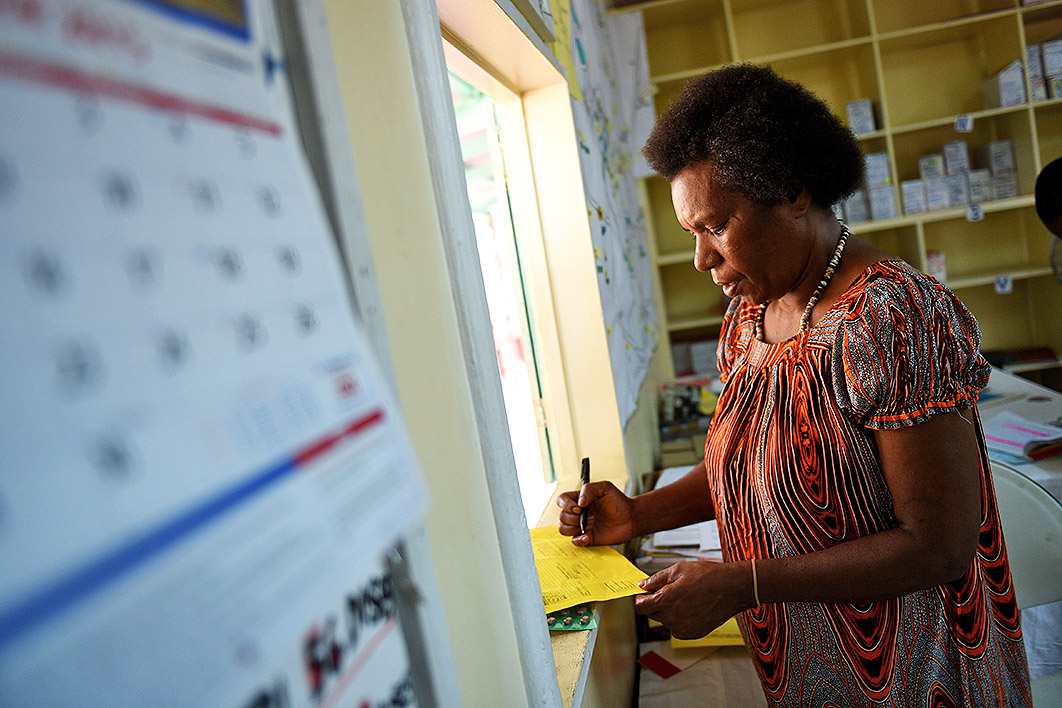