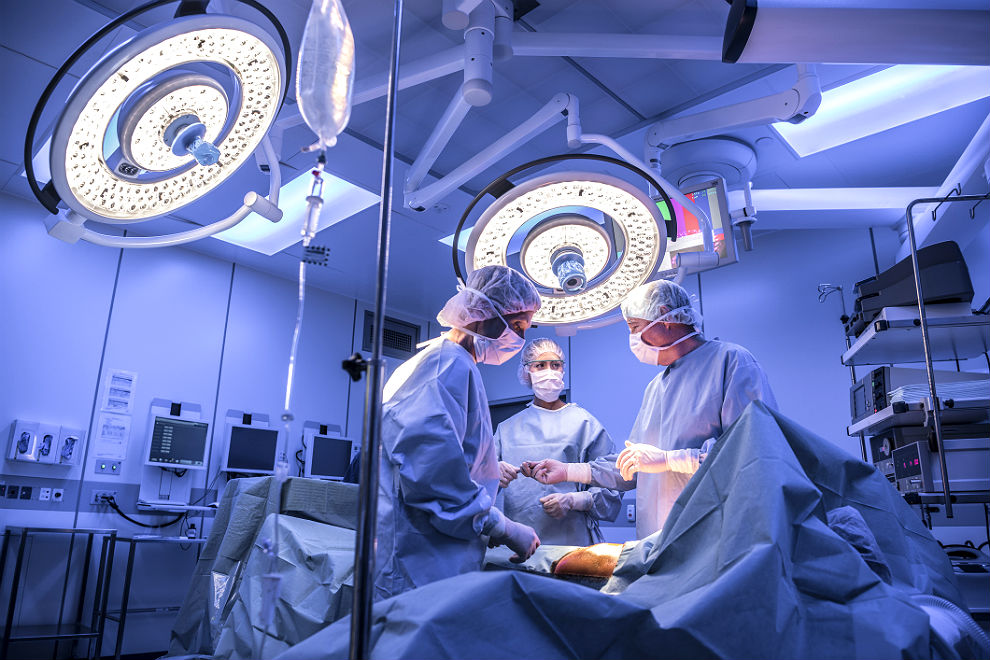 A troubling, anxious subject: the patient under anaesthetic. Johnny Greig/iStockphoto

Anaesthesia: The Gift of Oblivion and the Mystery of Consciousness
By Kate Cole-Adams | Text Publishing | $32.99

Imagine you are lying in a hospital bed, facing an operation that you must endure without anaesthetic for medical reasons. The surgery is so painful that a drug is administered to erase its memory. Waking from sleep, you ask a nurse whether you have had the operation or whether it is still to occur. The nurse is unsure whether you are the patient who had a ten-hour operation yesterday or the one who will have a one-hour operation later today. Which patient would you rather be?

This thought experiment was posed by the great moral philosopher Derek Parfit, who died last New Year’s Day. Parfit, whose ideas on personal identity have a Buddhist flavour – passages of his work are intoned by monks in a Nepalese monastery – queried the rationality of preferring a longer period of concluded pain to a shorter period that is still to come. The two experiences can both be vividly imagined but not recalled, and they differ only in their tense and quantity. It seems odd to favour the option that involves the larger quantum of suffering, as most of us do intuitively. More basically, is it rational to care at all about future pain that will not be recalled, suffering that does not become part of a continuous experience of self?

Kate Cole-Adams’s fascinating Anaesthesia: The Gift of Oblivion and the Mystery of Consciousness reveals that Parfit’s tale is not just a philosopher’s thought-bauble but also an insight into common experiences of surgery. Surgical patients are intensely concerned about the pain they might feel, often more than they care about the possibility of surgical error, infection or the gruesome fact that their bodies will be sliced and perforated. They submit to a chemically induced discontinuity in their consciousness to avoid that suffering in the present and wipe it from future memory. It is even possible that anaesthesia is effective precisely because it induces amnesia: patients under the influence of anaesthetics may experience excruciating pain during surgery but have their memory of it blocked when they awaken.

Cole-Adams’s main preoccupation is not, however, forgetting pain after anaesthesia but becoming aware during it. Some proportion of patients, its magnitude much in dispute, reports emerging into wakefulness during surgery, an experience that is often profoundly traumatic. Cole-Adams describes the experience as one of terror but it is better understood as horror. It is not so much that an awful but uncertain possibility is dreaded; instead, an awful reality has come to pass. In the words of the American scholar Barton Levi St Armand:

Horror overtakes the soul from the inside; consciousness shrinks or withers from within, and the self is not flung into the exterior ocean of awe but sinks in its own bloodstream, choked by the alien salts of its inescapable prevertebrate heritage.

Why becoming aware during anaesthesia should generate this existential horror is easy to comprehend. Searing pain is experienced in a body that is paralysed and unable to communicate, a predicament of deep, invertebrate helplessness. It is no surprise that people who endure it often suffer lasting psychological effects. As Cole-Adams speculates, some reports of alien abduction – being probed by spectral figures while lying immobile under intense light – may represent distorted memories of imperfectly anaesthetised surgery. This horror also explains why preventing awareness during surgery – and denying the inconvenient truth that it sometimes occurs – is a preoccupation among anaesthetists.

Anaesthesia is a topic that most readers will not have explored in any detail. But it is an important and spacious one, despite being almost invisible, just as anaesthetists themselves hover in the background while surgeons hog the limelight. (Anaesthetists’ joke: “The adjustment of an operating light is an immediate signal for the surgeon to place his head at the focal point.”) We should be very grateful to Cole-Adams for bringing the field into the wider consciousness it deserves. Without effective anaesthetics, the surgical revolution would not have been possible, medieval patients having to make do with prayer, herbs and violent restraint. Beyond its enormous practical importance, anaesthesia is also intellectually rich, helping us to understand the complexities of consciousness and unconsciousness.

Take consciousness, for a start. We are accustomed to having our subjectivity, our sentience and our capacity for voluntary movement all marching in lockstep. While awake we are aware, feel pain and emotion, and act on the world, and when we are asleep we are unaware, numb and inert. Anaesthesia can disrupt this alignment. There can be awareness without feeling, thanks to local analgesia; feeling without awareness, in the sense of pain suffered while unconscious; and awareness and feeling without movement, due to muscle-blocking drugs that cause paralysis. By producing these unusual phenomena, anaesthesia opens a revealing window on how the mind reacts to its temporary unravelling.

The nature of unconsciousness is equally complex. The term “unconscious” can refer to many levels of unawareness, which anaesthetists call the “planes of anaesthesia.” Cole-Adams demonstrates how enormously difficult it is, despite great advances in medical technology, to assess in the operating theatre when consciousness ends and unconsciousness begins. “Unconscious” can also refer to knowledge that exists outside awareness but may nevertheless exert an influence on behaviour. Cole-Adams explores at length how events occurring while patients are apparently out cold, and overheard speech in particular, may affect patients after they have come to. “Unconscious” can also have a Freudian meaning, referring not to what merely happens to be outside awareness but to what is forced out of awareness by repression or other psychological mechanisms of defence. The link to anaesthesia may seem tenuous, but Cole-Adams makes a case for some intriguing connections that also illuminate the neural and psychological processes responsible for the unity of normal consciousness.

This is a book of ideas, and Cole-Adams has spent its long gestation talking with a remarkable assortment of practitioners and researchers, and critically observing and mulling over their work. But it is also a deeply personal story. Interspersed with her never-dry explorations of concepts, theories and clinical practice, she relates her own experience of spinal surgery, her neuroses, her troubled relationships with partners, the illnesses and frailties of family members, and her deep resonance with people who have experienced “accidental intraoperative awareness.” Cole-Adams’s sensitive and slightly bruised persona is always present, only occasionally becoming intrusive or distracting. Throughout she writes vividly. During a period of recovering from a nameless fatigue, her voice is “slow and flat, like a mop being dragged across a floor.” As an anaesthetised patient has his false teeth removed, “his lips wilted inwards.”

It has been said that anaesthesia is the half-asleep watching the half-awake being half-murdered by the half-witted. Like surgery it is a troubling, anxious subject that most of us would rather avoid or deflect with dark humour. Cole-Adams has illuminated it in a memorable way. The book is a gift not of oblivion but of awareness. •

Lacking popular support or the endorsement of even a single state, the push for the Republican healthcare bill seems detached from reality

Senate majority leader Mitch McConnell in the grounds of the White House following a meeting to discuss healthcare legislation with Senate Republicans and president Donald Trump on 27 June. Michael Reynolds/EPA 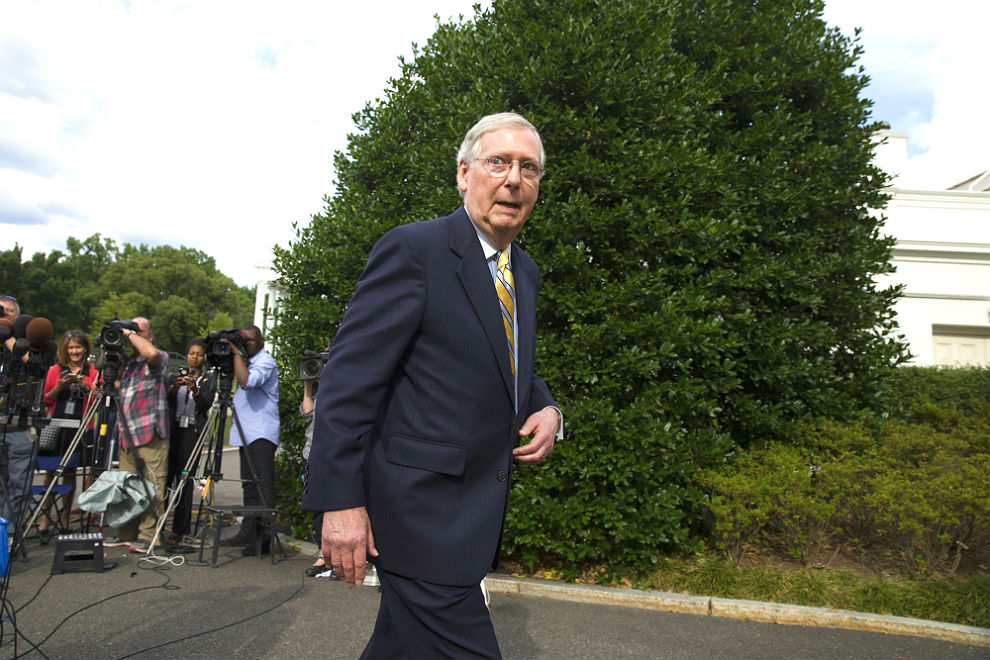 Senate majority leader Mitch McConnell in the grounds of the White House following a meeting to discuss healthcare legislation with Senate Republicans and president Donald Trump on 27 June. Michael Reynolds/EPA