The Australian talks about climate change with (almost) one voice 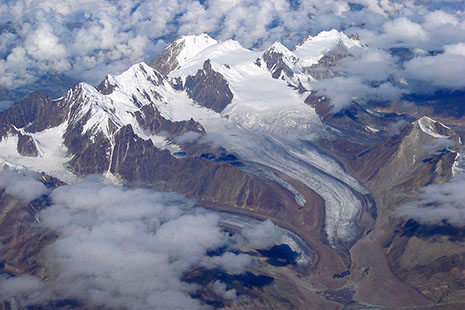 The Himalayas photographed en route from Delhi to Leh. Krayker/rgbstock

A few weeks ago ABC chairman Maurice Newman suggested that the national broadcaster displayed “groupthink” in its treatment of global warming issues. A chorus of commentators in the Australian immediately agreed with him.

The story was irresistible for the Australian, because it simultaneously tapped into two of the paper’s obsessions – the sins of the ABC and the alleged weaknesses of climate science. But when the words climate change, groupthink and the Australian appear in close conjunction, another phrase – the one about glass houses – immediately comes to mind.

As one small test of the paper’s coverage of global warming, I tracked every article referring to glaciers published in the paper so far this year. Glaciers were in the news for several reasons but most spectacularly, in mid January, following much coverage of a false claim in the Intergovernmental Panel on Climate Change’s 2007 Report that the glaciers in the Himalayas could disappear by 2035. This was one paragraph in a 3000-page report, and only one of dozens of findings and predictions about glaciers, let alone surface ice more generally. Nevertheless it was an important error, and it deservedly focused critical attention on the IPCC and its processes.

Glaciers have been the subject of systematic study for a long time, and the historical record since the last Ice Age has fairly reliably been traced. In its 2005 survey of 442 glaciers the World Glacier Monitoring Service found not only that 90 per cent were retreating, but also that the rate of loss between 1996 and 2005 was double the loss during the previous decade and over four times the rate of loss during the decade before that. The cumulative loss of ice from 200 glaciers studied systematically from 1945 to 2005 was, by my calculation, equivalent to between one fifth and one ninth of the current ice mass of those glaciers.

The WGMS noted that 1998 was a record year for mass loss in glaciers, but since then that record has been exceeded three times. The 2006 figures, the latest published, show the biggest loss ever.

In the six weeks after the revelation of the false claim in the IPCC report the Australian published forty-two stories that made some mention of glaciers. All of the articles referred to the IPCC’s error in relation to Himalayan glaciers. In thirty-eight of the forty-two stories the only reference to glaciers was the false finding; the other four articles mentioned both the error and some other findings about glacier movements.

Around this time, a new scientific report was released highlighting the accelerating rate at which glaciers are melting – a finding that other newspapers found newsworthy. The Guardian, for example, attended to both in separate stories on 20 January. The first was headlined “Claims Himalayan glaciers could melt by 2035 were false, says UN scientist,” and the second, around two-thirds the length of the first, was “World’s glaciers melting at accelerated pace, leading scientists say.”

The Australian buried the second story inside the first. Cameron Stewart’s forty-paragraph article contained just four paragraphs, in the second half, referring to the report discussed in the Guardian’s second article; three of those four paragraphs included a word or phrase indicating uncertainty or qualification.

Amid the litany of conformity in the Australian there were two pieces of distinguished journalism. The first was a column by Mike Steketee showing that the error in no way qualified the main picture we have of global warming, which is supported by a mass of evidence. The other was a hard-hitting report by the paper’s European correspondent, Peter Wilson, about how the error occurred and how some officials sought to deny it rather than acknowledge the criticisms. Wilson’s story was based principally on an interview with the Canadian scientist, Graham Cogley, who had exposed the error, and who presciently said that it would be blown out of proportion by global warming sceptics to try to cast doubt on the whole IPCC report. Later newspaper reports – in the Australian and elsewhere – tended to overlook the fact that it was a climate scientist, and one who accepted the overwhelming bulk of the IPCC report, who had exposed the error in the interests of factual accuracy.

Apart from the Australian’s lack of interest in other evidence about glaciers, the newspaper also often framed the error, which it sometimes called “glaciergate” or “icegate,” as if it were part of a common or dominant pattern. So the newspaper’s stories had headlines such as: “Scientists say IPCC should be overhauled or scrapped,” “More flaws emerge in climate alarms,” “UN caught out again on climate claims,” “Climategate is the tip of the iceberg” and “Don’t trust the weatherman’s forecasts.”

The treatment of the glaciers is part of a long-term pattern in the Australian. Its reporting of climate change is marked by an unquenchable thirst for stories criticising those who say anthropogenic climate change is a problem and a studied lack of interest in reporting the great bulk of research that says it is. On the most important long-term issue facing the nation, its news priorities are marked by a stifling internal conformity which trivialises and distorts coverage. •

Correspondents Agreement by ordeal Michael Jacobs 22 November 2022 Nearly forty hours behind schedule, a final climate compromise was reached in Sharm el-Sheikh. But important action was going on elsewhere too
Close