Harold Holt and the art of personal diplomacy

He might have been an ardent admirer of the United States, but Harold Holt also brought welcome changes to Australia’s relations with the rest of the world, writes Paul Rodan 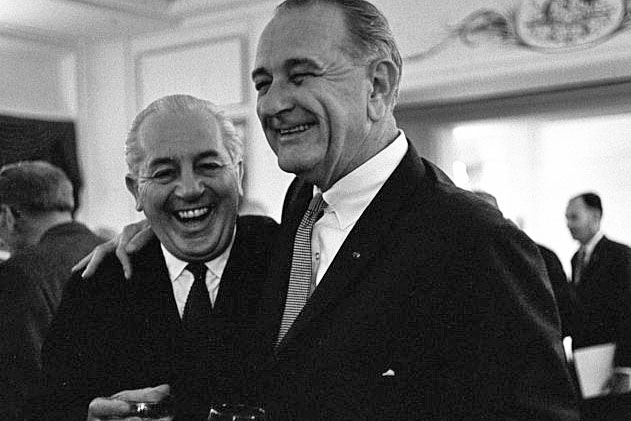 When Harold Holt declared “All the way with LBJ” fifty years ago, it was destined to become his best-known utterance. The location was Washington, the day was 30 June 1966 and “LBJ” was US president Lyndon Baines Johnson. For many people Holt’s words still serve as a reminder of Australia’s all too uncritical postwar relationship with the United States and our failure to develop a sufficiently independent foreign policy.

Holt, who succeeded Robert Menzies as Liberal prime minister in January 1966, had no interest in altering the substance of Australian foreign policy. This was hardly surprising: he had been a member of Menzies’s cabinet since its creation in 1949 and shared an aggressive anti-communist worldview that reached its apex with the commitment of Australian troops to the Vietnam War in 1965.

Through the cold war, the government’s hardline policy had delivered considerable electoral benefits to the Liberal–Country Party government. For its part, the opposition Labor Party (which had split in 1955 over attitudes to communism) had struggled to develop a coherent approach to the perceived threat of communism, both internationally and at home. Holt, facing his first election as prime minister in late 1966, was keen to retain this advantage.

Outside the cold war framework, Holt was essentially a moderate. He had shown more than a modicum of compassion as immigration minister, and as labour and national service minister had enjoyed a productive and amicable relationship with ACTU president Albert Monk, a consensus approach simply unthinkable in today’s Liberal Party. Later, as treasurer, he was as Keynesian as the next fellow.

But while Holt’s accession saw no significant change in substance, there was certainly a difference in style. This was true both generally and in relation to foreign policy. At a general level, the fifty-seven-year-old was presented as a man of his (swinging ’60s) era, a contrast to the old-fashioned Menzies. The age gap seemed greater than the actual fourteen years, and Holt also seemed a full generation younger than his sixty-nine-year-old Labor opponent, Arthur Calwell, a man who certainly had no interest in adapting to the mood of the decade.

Holt’s daughters-in-law posed for photographs in bikinis and Holt himself enjoyed spear-fishing. (The leisure activities most usually associated with Menzies – watching cricket or football – were passive.) Holt’s wife, the colourful Zara, ran her own dress shop. Symbolically, Holt’s accession had coincided with the introduction of decimal currency.

Soon after taking office, Holt offered the view that managing foreign relations, largely in southeast Asia, would be his government’s main challenge. Central to that challenge was the war in Vietnam. Holt’s first parliamentary address as prime minister announced an increase in troops numbers from 1500 to 4500. In December, the numbers were raised to 6300, and finally, in October 1967, the commitment was raised to just over 8000 – the peak Australian involvement.

Holt embraced the full range of arguments for Australia’s participation in the war: China was a puppet-master pulling Hanoi’s strings as part of the Communist Chinese philosophy of world domination; the South Vietnamese needed help in resisting aggression; commitments under the Southeast Asia Treaty Organization had to be honoured; and the domino theory would be validated if Saigon fell. His most honest explanation was probably the contention that Australia needed the great power presence of the US in the Asia–Pacific region.

Holt’s commitment to the Vietnam War must also be viewed in the context of two important factors: the impending British withdrawal from Asia and his personal relationship with President Johnson. Menzies would have found the former development difficult to accept. His attachment to Britain and the Commonwealth was all-important and had not been weakened by the realities of the mother country’s inability to assist Australia during the second world war. Holt was less emotionally attached and viewed the exit of Britain from the region as bolstering the case for maintaining and strengthening the US presence in Asia. Because he died before the war “went bad,” Holt never had to contemplate the possibility that the US’s failure could achieve the opposite outcome.

Australia’s desire to be seen as a loyal American ally was personified in the relationship between Holt and Johnson, a “spectacular friendship” that “simply exploded” between them, according to Zara Holt. “All the way with LBJ” was not an original slogan – it had been used by Johnson in domestic election campaigns – but it was clearly an inappropriate expression of fealty from the leader of a supposedly independent nation. But there is no evidence that the pledge, coming as it did at the height of public support for the Vietnam War, did Holt any electoral damage, although it was not unreasonably viewed as sycophancy by the vocal minority opposing the war. Johnson rewarded his ally by visiting Australia just prior to the 1966 federal election, a breach of political etiquette which would never have worried LBJ, nor Holt, who romped to a (then) record electoral victory over Labor.

Holt’s concern that the US remain focused on southeast Asia produced at least one faux pas. While he was in Washington in June 1967, he was alleged to have described the then raging Arab–Israeli war as “only huffing and puffing,” and although he did not utter the words himself (it was his press secretary Tony Eggleton) the observation was indicative of a fear that events elsewhere could divert the US from its focus on Vietnam, which Holt viewed as more relevant to Australia’s immediate security.

Even more curious was the Holt government’s decision to open an embassy in Taiwan in 1966, a move that had been resisted by even hardline anti-communists in the Menzies government. Explanations for this initiative have varied, from Holt’s wife being enchanted by the Taiwanese ambassador to Australia to (more prosaically) lobbying by local Taiwan interests. Whatever the rationale, it was an odd decision, opposed by the foreign policy establishment and fated for reversal once the Whitlam government recognised the People’s Republic of China in 1972.

In his approach to foreign policy, Holt, an amiable and gregarious person, placed a heavy emphasis on the development of personal relationships with other heads of government. He travelled extensively, including to Asia (another departure from the Menzies era). Ironically, his external affairs minister, Paul Hasluck, held antithetical views about the value of personal diplomacy, regarding the practice as mischievous and (at its worst) an impediment to the progress of peace. He mocked the “almost pathetic belief” by some leaders “that if they have had lunch with someone and called him by his Christian name they have changed the fundamental facts of relationships between nations.”

If Holt was offended by this critique, it did not lead to any obvious conflict with Hasluck, who in turn appeared to harbour no reservations about remaining a minister for such an avid devotee of the personal touch. Hasluck might have viewed Holt’s travels and meetings as mostly harmless public relations, allowing the minister to get on with the substance of foreign policy.

If foreign policy is taken to include immigration, then Holt deserves credit for an important policy departure from his predecessor. An early initiative was a reduction from fifteen years to five in the period of prior residence required in Australia for non-Europeans to quality for permanent residence or citizenship, bringing it into line with the rules for Europeans. In addition, the entry category of “distinguished and highly qualified” (for non-Europeans) was replaced by the less onerous “well qualified.” Mindful of the longstanding appeal of the white Australia policy, Holt ensured that these reforms were preceded by an extensive round of consultation with interested parties, including employers, unions, the RSL and the opposition Labor Party (led at the time by notorious white Australia supporter Calwell).

The dismantling of white Australia is meritorious enough to have attracted multiple claims of ownership, but Holt deserves a substantial slice of the credit. Unlike Calwell, he appears to have been genuinely moved by those hardships cases that had crossed his desk when he was immigration minister. While the reforms had the benefit of enhancing Holt’s image of being his own man, with different priorities from Menzies’s, the former secretary of the external affairs department, Alan Watt, was surely accurate in describing the changes as of “fundamental importance in the development of Australian foreign policy and the search for friendly relations with non-European countries.”

If there is a foreign policy legacy for Holt, it may be found in the bipartisan consensus that has been the norm for (at least) the past thirty years, with Labor seemingly forever anxious to avoid the electoral vulnerability of 1966. While no Labor leader may have offered any cringeworthy “all the way” pledges, the party’s commitment to the US alliance, in word and deed, stands in stark contrast to the battle lines of the Vietnam War era.

Holt died in December 1967, six weeks before the Tet offensive, the communist campaign which indicated that the US and its allies had underestimated the enemy and overestimated their own chances of victory in Vietnam. His premature demise spared Holt this reality check, and it is unclear how he would have adjusted to changed circumstances that also served to undermine the longstanding perception that his party held the monopoly of wisdom in defence and foreign affairs.

Leaving aside the tragedy of Vietnam, Holt’s foreign policy is remembered for its welcome focus on Asia, a point generously acknowledged by Gough Whitlam in his parliamentary eulogy when he asserted that Holt had “made Australia better known in Asia and he made Australians more aware of Asia than ever before.” It was an acknowledgement that would have pleased him. •

The beginning of the end of the White Australia policy

International symbol: the furore over the deportation in 1965 of five-year-old Nancy Prasad (shown here with her sister and brother-in-law) helped fuel pressure for a shift in Australian immigration policy. 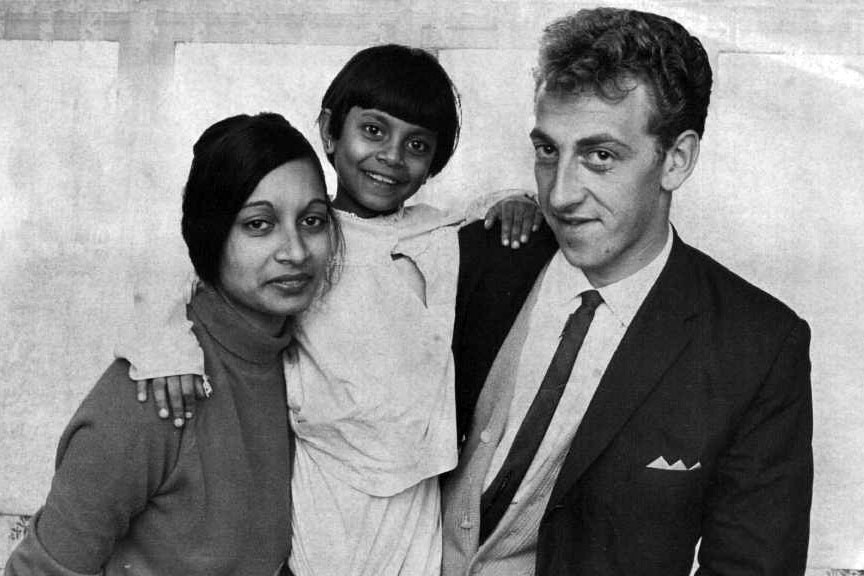 International symbol: the furore over the deportation in 1965 of five-year-old Nancy Prasad (shown here with her sister and brother-in-law) helped fuel pressure for a shift in Australian immigration policy.