Does the future of entertainment lie with superstars or in the “long tail,” ask Jock Given and Marion McCutcheon 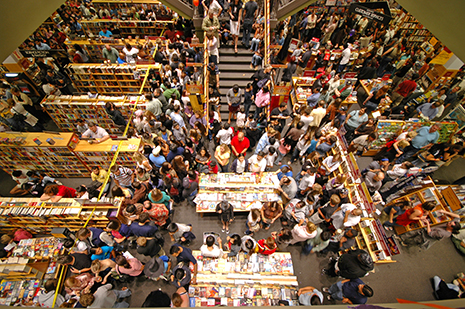 The bet that paid off: shoppers queuing for Harry Potter at Borders. Zack Sheppherd/Wikimedia

“THE phenomenon of Superstars… seems to be increasingly important in the modern world,” wrote economist Sherwin Rosen in 1981. Comedians were earning “extraordinary sums,” especially from TV. A few hundred classical music soloists earned much more than second-rank musicians, though most consumers couldn’t tell the difference. Economics textbook sales were dominated by a few bestsellers, despite the availability of lots of “good and highly substitutable alternatives.”

Why was this happening? Rosen identified two related reasons. First, “lesser talent often is a poor substitute for greater talent… Hearing a succession of mediocre singers does not add up to a single outstanding performance.” Second, technologies that enabled “joint consumption,” especially of entertainment products, made it “advantageous to operate in the largest overall market – and increasingly advantageous the more talented one is.” The best artists sold their work “in the great markets of New York and Paris, not Cincinnati.” Violinists made more money than accordionists. Tennis players were better-paid than ten-pin bowlers.

Technological change had magnified the benefits of scale, Rosen argued. Recorded music, movies, radio, TV and other changes in communications “had increased the scope of each performer’s audience.” Outside entertainment, “secular changes” in transport and communications technology had “expanded the potential market for all kinds of professional and information services and allowed many of the top practitioners to operate at a national or even international scale.”

Rosen remembered economist Alfred Marshall’s observation, many decades before, that “the operations, in which a man exceptionally favoured by genius and good luck, can take part, are so extensive as to enable him to amass a large fortune with a rapidity hitherto unknown.” Marshall too thought technology was part of the explanation: “the development of new facilities for communications by which men, who have once attained a commanding position, are enabled to apply their constructive or speculative genius to undertakings vaster, and extending over a wider area, than ever before.”

Early in the twenty-first century, Wired editor Chris Anderson argued that newer technologies were having a quite different impact. In virtually all markets, he argued, niche goods greatly outnumbered bestsellers. The cost of supplying those niches was falling dramatically and tools enabling consumers to find them were improving. Because there are so many niche products, “collectively they can comprise a market rivalling the hits.”

“Once all of this is in place, the natural shape of demand is revealed, undistorted by distribution bottlenecks, scarcity of information, and limited choice of shelf-space.” That shape – which Anderson called the Long Tail – is “as diverse as the population itself.” It is “culture unfiltered by economic scarcity.”

DO AUSTRALIAN sales of cinema tickets, DVDs and books support the superstar or Long Tail argument? To find out, we looked at the evidence from a decade of purchases of these three different products. The Motion Picture Distributors Association of Australia provided cinema data for 2002–11, and the market researchers GfK Australia gave us figures for DVDs. For books, we had access to Nielsen BookScan figures going back to 2003, the year it began collecting data in Australia.

This was the period in which a new Harry Potter book came out every year or two, followed about four years later by a movie version and, four months after that, by a DVD. At the start of the period, The Lord of the Rings movies and Star Wars prequels were huge in cinemas and on DVD; towards the end, the Transformers and Twilight franchises emerged. Instalments of Pirates of the Caribbean, Shrek and Ice Age appeared throughout the decade. In the final year of the period, 2011, the first of the three Fifty Shades novels was published, achieving astonishing sales figures.

The overall data for cinema sales, DVDs and books show striking similarities and differences. For much of the period, total revenues, adjusted for inflation, were remarkably similar. Between 2004 and 2010, each sector earned between $1 billion and $1.4 billion in 2011 dollars. DVD (including Blu-ray) sales rose sharply into that range at the start of the period and fell just out of it at the end. Book sales rose through the decade but fell in 2010 and 2011. Cinema revenue grew, though not steadily.

The numbers of titles sold in the three markets differed markedly. In 2011, 437 films screened in Australian cinemas (including 342 new releases during the year), a tiny fraction of the number of DVDs (around 36,000) and books (around 630,000) that sold at least one copy.

The rates of change in these figures were also very different. The annual number of movies screened in cinemas increased by a quarter over the decade. The number of books selling at least one copy more than doubled. The number of DVDs increased nearly tenfold between 2002 and 2009 but then fell 20 per cent in the two years to 2011.

This growth in the number of titles suggested a lengthening “tail” for all three products. But what of the revenues earned in these longer tails?

So is that the end of the Long Tail thesis? We thought not. The problem with using a “relative metric” in markets where the number of titles is growing strongly is that many more titles get counted in both the “head” and the “tail” as time goes on, but the head reaches much further down the list of bestselling titles.

An alternate approach is to use what we call an “absolute” metric, in which the head is defined as the revenue earned each year by a fixed number of titles and the tail as the rest. This approach isn’t perfect – selecting the sets of top titles is fairly arbitrary and interpreting what is meant by those titles can be tricky – but it looks at the data in a different way.

Applying this metric hardly changed the results for the cinema data. Independent of measurement technique, a fairly small share of movies consistently generated the vast majority of Australian box office revenue. Box office might not quite be a winner-takes-all market, but it has been and continues to be “winner-takes-most.”

So changing the way we defined the head and the tail led to a different conclusion – that a significant Long Tail had emerged, or lengthened, in DVDs and books.

HARVARD Business School’s Anita Elberse has been analysing these issues for years. Her book Blockbusters, published recently in Australia by Scribe, uses a range of examples – from the Hollywood studio Warner Brothers to the football team Real Madrid – to argue that the best-performing companies invest a relatively large proportion of resources in a few superstar titles and people. They maximise their chances of success with big marketing budgets, aiming to stand out in increasingly competitive markets. Analysing Warner Brothers’ projects, Elberse concludes that the biggest bets have been the most profitable. Not pursuing a blockbuster strategy, she says, can be riskier, because you simply cannot afford to end up in the long, but decidedly thin, tail.

Blockbusters is an important counter to the Long Tail thesis. Elberse demonstrates just how important big stars, big titles and big franchises continue to be for the entertainment business. But she makes an even bigger claim: not only is the importance of individual bestsellers not diminishing over time, it is growing. “Rather than a shift of demand to the long tail, we are witnessing an increased level of concentration in the market for digital entertainment goods… the entertainment industry is moving more and more toward a winner-take-all market.”

We’re not so sure. To draw that conclusion, you have to be very confident the datasets you are using are not just internally consistent, but also continue to capture or describe the same thing over time.

Of the three media we analysed, the oldest and most open market – books – had, by a narrow margin, the strongest blockbuster characteristics (on either the relative or absolute metric). This supports Elberse’s view and the old observation that, by allowing people “to apply their… genius to undertakings vaster… than ever before,” superstar rewards might increase over time.

We also found, like Elberse, that although the tail has grown for books and DVDs, it is very long and, especially for books, very, very thin. Of the 625,000 books that sold at least one copy in 2011, the bottom 500,000 sold an average of just five copies each. That is useful for businesses that can cheaply aggregate a lot of such titles; it is not so useful financially for small-scale producers of the titles that sit, largely unwanted, on the server or shelf.

But neither Elberse’s nor our data covered the universe of relevant consumer behaviour. The cinema data captured all the movies that got a theatrical release in commercial cinemas; it did not cover those screening in the growing number and range of film festivals. The Nielsen BookScan data counted books sold in Australian retail stores but not e-books or any purchases from overseas retailers like Amazon, and it tells us nothing about what people were actually reading. The GfK DVD data alone doesn’t tell us what consumers have been doing with their content choices and leisure time as they have bought fewer DVDs.

Our analysis also shows that how you define the head and the tail has a big impact on the results. Describing and understanding rapidly changing marketplaces is like photographing a fast-moving object – you can accept a blurred object, or a blurred background, or set a very fast shutter speed to get a sharp but unnatural image of both. Each picture will be interesting but incomplete.

How you turn your conclusions about recent history into guidance for future activities is also crucial. Betting on blockbusters often means investing in proven formulas – people, stories, teams and sports that can be put before audiences with “pre-awareness.” But identifying, for example, the Harry Potter books and movies as the triumph of superstar economics emphasises the size of the bet Warner Brothers made on the movies, while perhaps under-appreciating the nature of the risks that Bloomsbury took with an untried author and that Warners took with untried actors.

Blockbusters doesn’t avoid the obvious question: if big bets are the most profitable, why make any small ones? Because, Elberse answers, they can serve as test cases for bigger projects, they can keep distribution pipelines full and spread their fixed costs, they can attract outside investors with different risk profiles, and they can offer prestige projects to fussy stars.

The overwhelming message, however, is that the way to succeed is to be big, and the way to get big is to be big already, or enter into partnerships with big people.

There is clearly a lot in this. But it is primarily an assessment – an extraordinarily useful one – of how some large enterprises are trying to stay large, sometimes successfully. It is less satisfactory as a comprehensive explanation of the competing, even contradictory, forces affecting entertainment markets and the wider economy.

Does YouTube’s rise tell us more about the power of the established company that took it over (Google), or about the initial, disruptive power of a newish idea brilliantly executed? Or about how hard it has still been for them to generate big profits, even from a wildly popular activity, in a media landscape that is difficult not just to predict, but also to measure. •

Jock Given is Professor of Media and Communications and Marion McCutcheon is a Research Fellow with the Swinburne Institute for Social Research. The research described in this article is part of a project about the distribution of fiction content, supported by the Australian Research Council, the ABC and Screen Australia.